Well, it isn’t very often we get the chance to see two different card designs from the same generation. But I can say that the XFX RX 5700 XT Thicc III Ultra is a significant improvement over the Thicc II Ultra that I previously took a look at. XFX improved the cooling performance by adding an additional fan, swapping the VRM heat plate to copper like it should have been all along, and with a slightly longer heatsink. Did Gamers Nexus’s review of the Thicc II which pointed out a few issues and stirred up a lot of drama cause the Thicc III to come out? I think that XFX may have already been working on the three fan model, but I’m willing to bet it pushed for it to come out quicker! Now the cooler design still shares a lot with the Thicc II and that includes its simple/clean styling. I think that is the best thing XFX has going on, these are great looking cards that don’t lean on RGB lighting at all and don’t follow the angular shapes that a lot of the other cards use. They are simple and to the point. The Thicc III Ultra also really ups the overclock over the Thicc II Ultra and it really shows in the performance.

Now the cooler design, especially the fan shroud does have a few big downsides as well that weren’t really improved on from the Thicc II to the Thicc III. In fact, I mentioned that the use of chrome-plated plastic wasn’t going to be everyone’s favorite feature and the new triple-fan cooler actually doubles down and adds even more. But the big issue with the shroud design is just how big the card is and the Thicc III did add to that even more. On top of that there is a LOT of plastic and it doesn’t help the overall feel, it squeaks and makes noises when you hold it and feels a lot less solid than other aftermarket cards not to mention when you compare it to the metal shroud on the reference design. The big overclock that the Thicc III Ultra gets also means it pulls a lot of power, significantly more than even the Thicc II, pushing the power usage up in the range of the RTX 2080 Ti at times. It's honestly amazing given the power usage that XFX still manages to improve on the cooling performance compared to the Thicc II.

Now my other big complaint with the Thicc II at the time was that they were selling it at $450 which was the most expensive RX 5700 XT available. Flagship prices for a card that the performance just didn’t match. With the Thicc III Ultra now available XFX’s product lineup has adjusted. The Thicc II Ultra is now available for $419 and also has a $20 off code available on Newegg right now. The Thicc III then comes in at $439.99. Both prices are much better this time around and better represent what you are getting. With the big overclock and big cooler the XFX RX 5700 XT Thicc III Ultra now better fits that flagship pricing and is priced $10-$40 less than some of the other high-end cards helps compensate for some of the card's downsides as well. In fact, with the Borderlands 3 or Ghost Recon codes that AMD offers along with the 3 month Xbox Game Pass this ends up being a good buy. Especially with the performance compared to what Nvidia has to offer right now and with this running significantly better than the blower reference design. 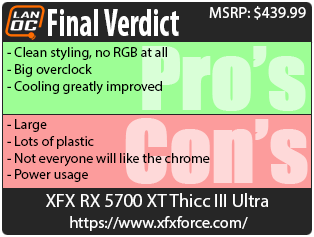 You might call him obsessed or just a hardcore geek. Wes's obsession with gaming hardware and gadgets isn't anything new, he could be found taking things apart even as a child. When not poking around in PC's he can be found playing League of Legends, Awesomenauts, or Civilization 5 or watching a wide variety of TV shows and Movies. A car guy at heart, the same things that draw him into tweaking cars apply when building good looking fast computers. If you are interested in writing for Wes here at LanOC you can reach out to him directly using our contact form.
Discuss this article
Log in to comment
Posts in discussion: XFX RX 5700 XT Thicc III Ultra