My last round of testing is also one of the most important when you have already decided which GPU you want. You then still have to pick from stacks of different models from all of the different manufacturers. The prices range, some look different than others, and sometimes like with Gigabyte and Asus they also have different gaming specific higher-end brands all together like Aurous. This time around the Gaming OC is still a Gigabyte branded card but with any of those models, it is stuff like cooling performance, noise, and power that will set them apart. Short of any exceptional overclock they perform at least mostly close to each other in all of the standard tests. So here I am going to test power usage, fan noise levels across a few different situations, and cooling performance.

Power usage is the first I’m going to check out. For this, I ran two tests. On both, I monitored the power usage of our test system using a Kill-A-Watt. To put things under load I first use 3DMark to replicate a gaming load on both the CPU and GPU. Now all of the RX 5700 XT’s have pulled a lot of power, but XFX most definitely cranked things up even more for the Thicc III Ultra. I’m told they turned it up 20 watts over the Thicc II Ultra which already pulled 210 watts where the reference is at 180 Watts. So with that in mind, it isn’t a big surprise to see the Thicc III Ultra up near the top of the charts here at 423 watts of system draw. That is exactly 20 watts over what the Thicc II Ultra did, but this also pushes it over the Radeon VII and right with the RTX 2080 Ti which is a little crazy. The AIDA64 stress test is a little better looking when we take out some of the CPU power usage (but not all obviously). The Thicc III Ultra came in at 329 watts here and the gap between it and the 2080 Ti is at least larger. Overall though, you can expect big power draw from this card if you are running in the performance mode, quiet mode does drop down to 195 watts, however (card setting, not total system draw). 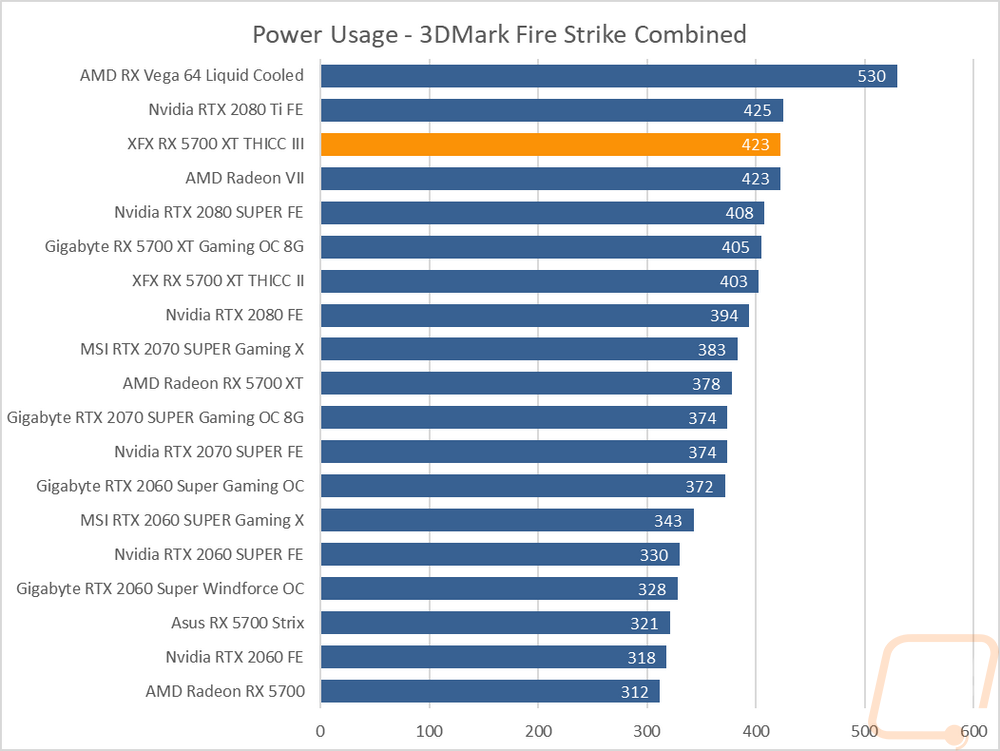 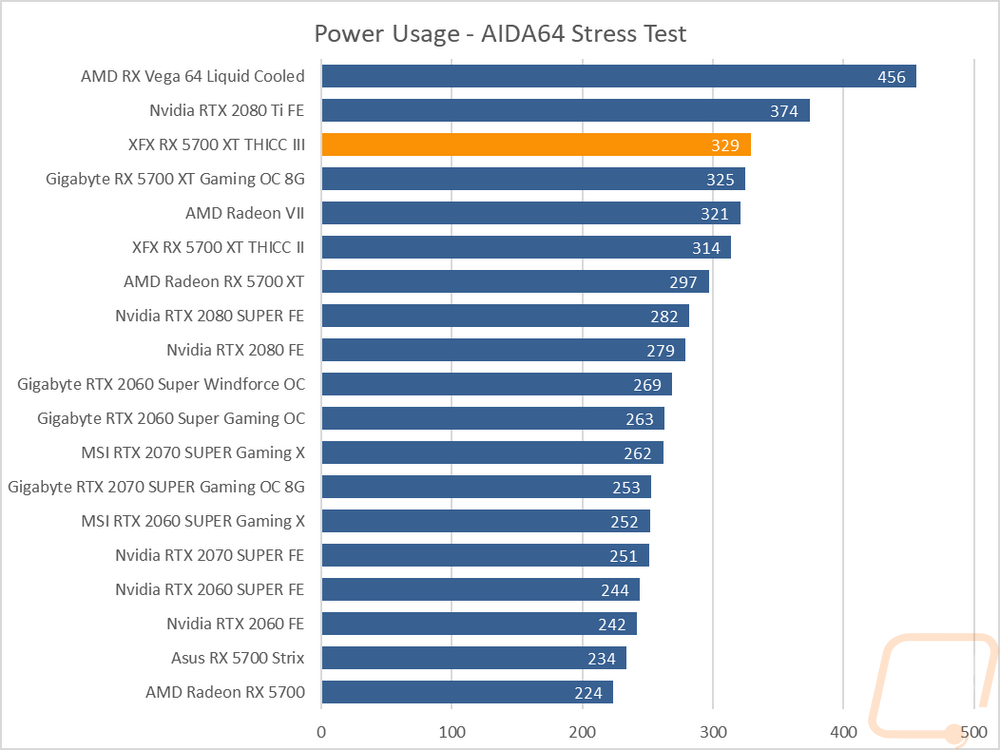 My next round of tests were focused on card noise levels. For this I ran three tests, using our decibel meter at 18 inches away for each. I tested 100% fan speed and 50% fan speed to get a look at the overall range of noise the card can make. Then I put it under load using AIDA64 stress test for a half hour, when the temperature leveled off I measured the fan noise there as well to show a worse case of what you can expect with the stock fan profile. So first off, the triple-fan cooler for the Thicc III, the fans come in running at 3647 RPM which is in the middle of the pack. But like the Thicc II which also ran at a lower RPM range than most of the cards tested, the Thicc III ended up being a lot noisier than the RPM would indicate. Normally you can see a direct correlation between RPM and 100% fan speeds but not this time around. It is loud, but funny enough still not at loud as the reference blower design. The 50% noise levels, on the other hand, a actually really good and are over 4 decibels lower than the Gaming OC which is also a triple fan design. The load results were what I was most curious about, in the real world with a heavy extended workload how much noise would it put out? The Thicc III came in at 38.8 decibels which was louder than the Thicc II and the Gaming OC. This basically ends up being on the high end for aftermarket coolers, but you can see a clear separation from the Thicc III and most of the reference designs, especially the Radeon RX 5700 XT reference card which was very loud. In other words, where the Thicc II was quiet I wouldn’t say the same about the Thicc III. But it isn’t obnoxious as well. 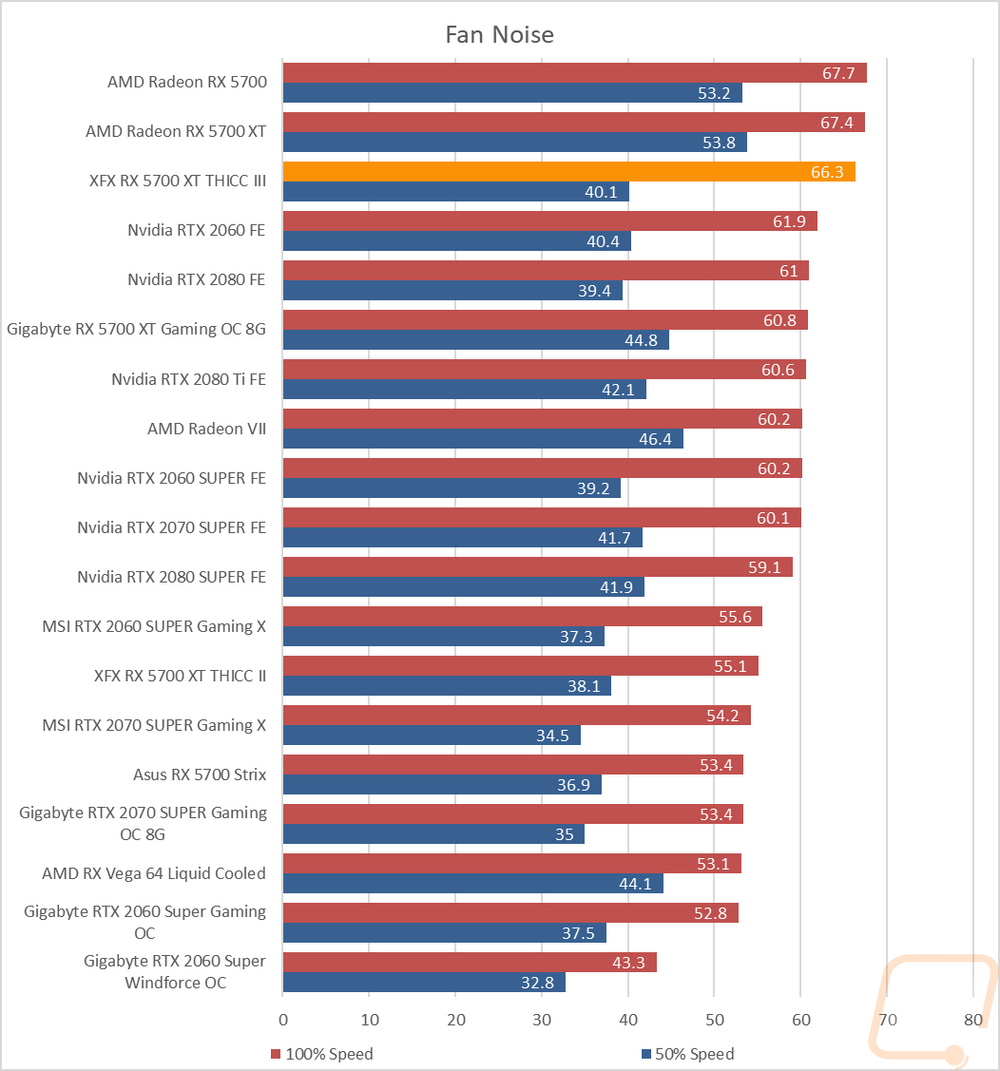 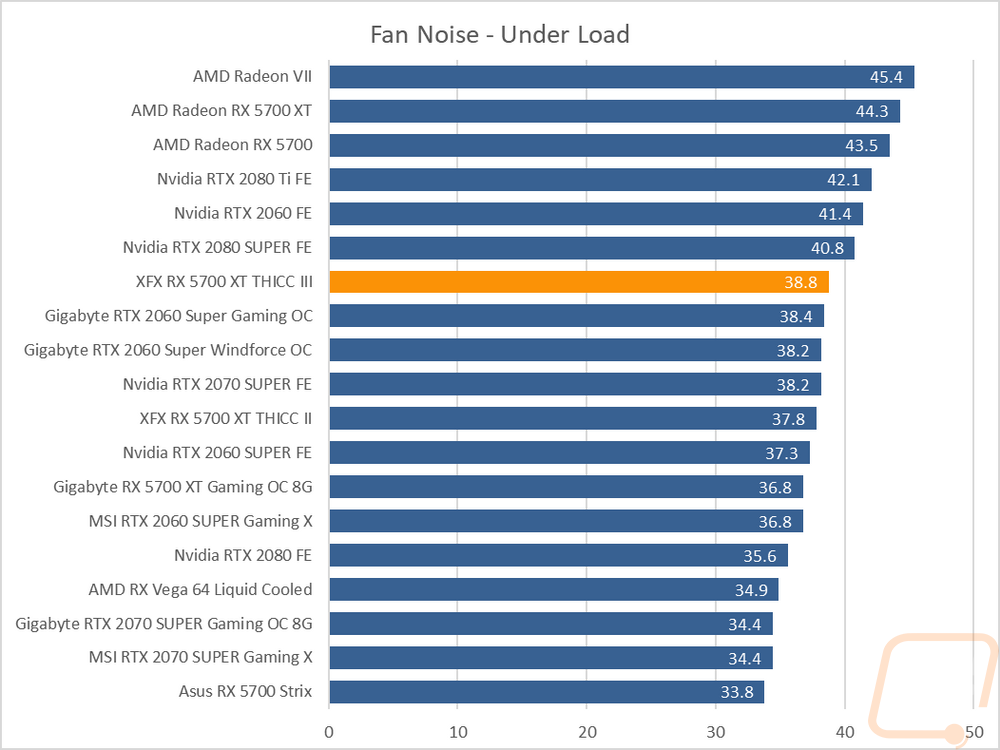 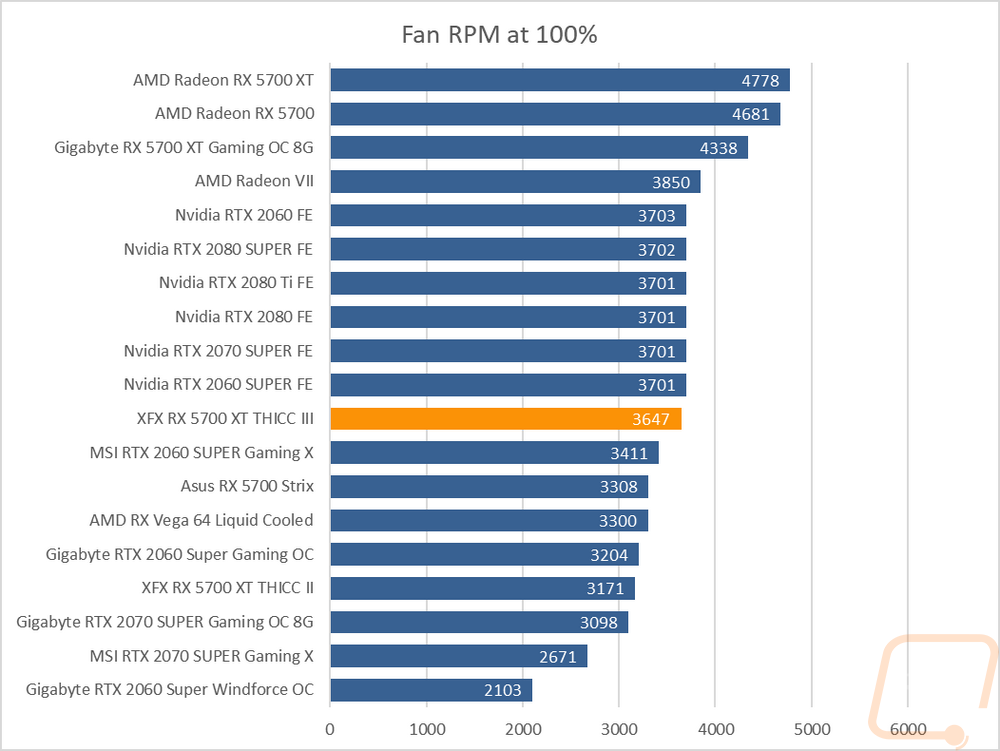 The last round of testing was focused on the thermal performance and this is where the Thicc II really fell behind previously. The RX 5700 XT reference design struggled to keep the GPU cool, adding even more power on top of that is a big challenge and the Thicc III went 20 watts above even what the Thicc II did. So I was surprised to see that it ended up at the bottom of our chart with the stock fan profile. I do think that XFX was more aggressive with this profile, you can tell because of the results in the noise testing as well. A profile that aimed for a few degrees higher would run even quieter, but they aren’t too worried about that because they have a quiet BIOS that cuts the power draw down to just above the reference levels. For my second thermal test I ran the same AIDA64 stress test, but with the fans cranked up to 100%. The idea here is to see what the delta is between the stock fan profile and the max cooling capacity. This will show how much more room is left for cooling/overclocking and also show if the fan profile is extremely aggressive. The Thicc III dropped down from 60c to 50c which does confirm the aggressive fan profile. But there is still some headroom left in the cooler as well. This was also 6 degrees less than the Thicc II, even with that additional 20 watts of power being pushed to the GPU. This is also the lowest of the fours RX 5700 XT’s that I have tested as well. 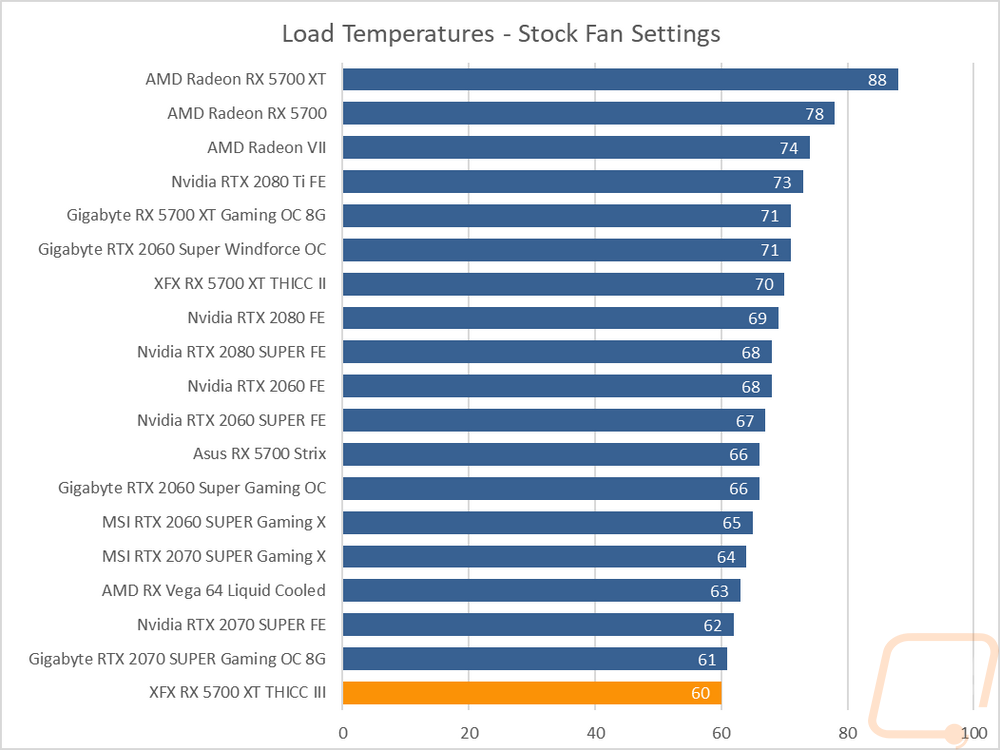 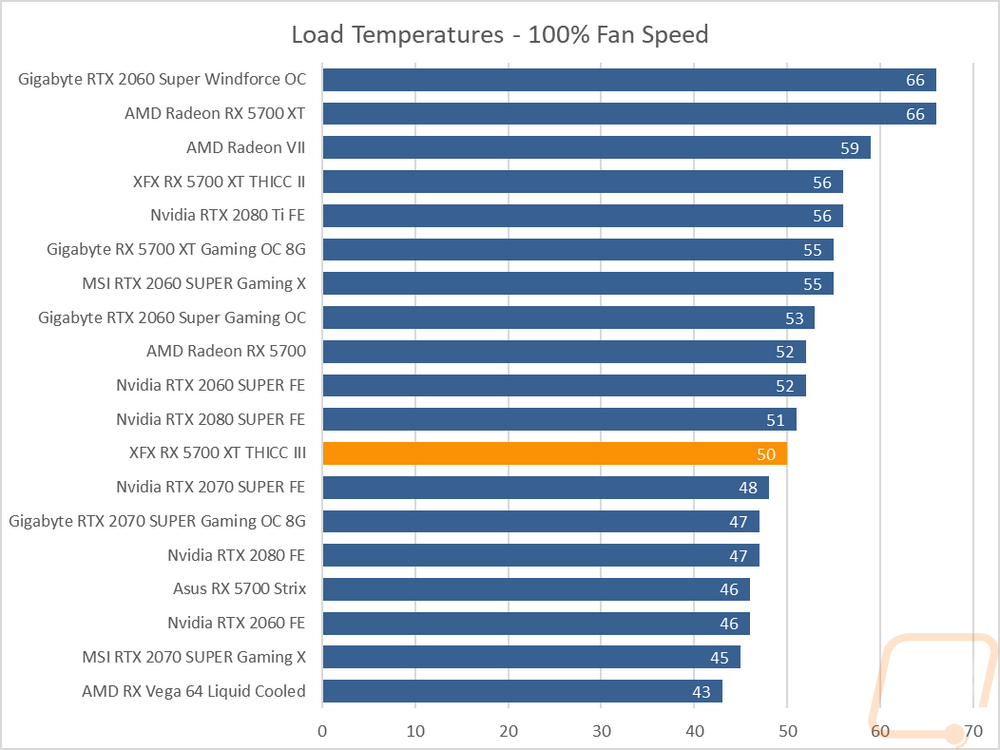 While I was doing thermal testing with the stock fan profile I did also take a few thermal images. The goal with these wasn’t for actual temperatures, but to just look for hot spots and get an idea of if the cooler has even cooling. Behind the fans, you do see the normal hot and cold side but all three fans are consistent showing that the heatpipes are doing a good job of spreading the heat across the cooler. The backplate doesn’t have any big hotspots but you can see all of the vents and just how much warmer the PCB is behind them. I talked about it with the Thicc III, but the overall fan shroud design does limit airflow a lot with this design. Packing in an additional fan, changing the VRM plate to copper, and adding a little to the length of the cooler did help a lot with cooling but there is still room for improvement in airflow and it shows on the top edge thermal image. You don’t see much heat coming out of the end of the card but you can see how the shroud cuts off airflow at the ends and with how it wraps around the top, especially at the PCB where it is still very warm. 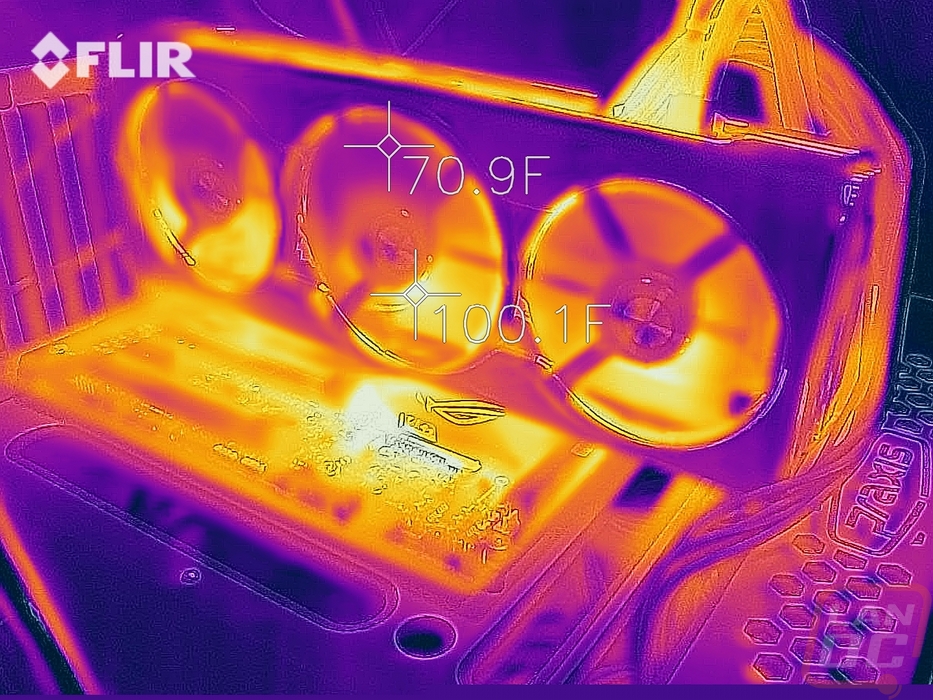 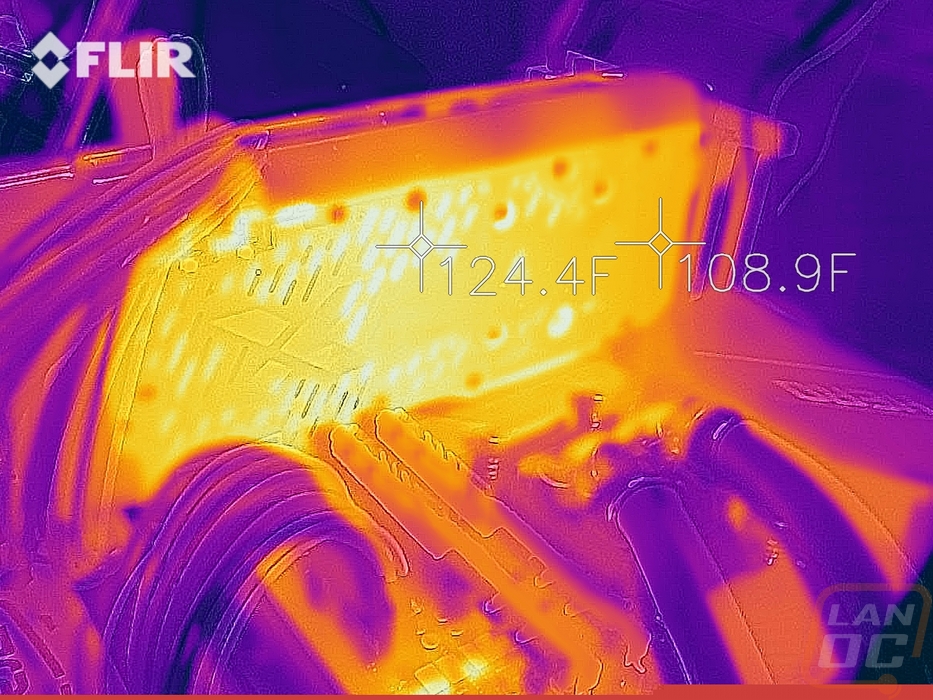 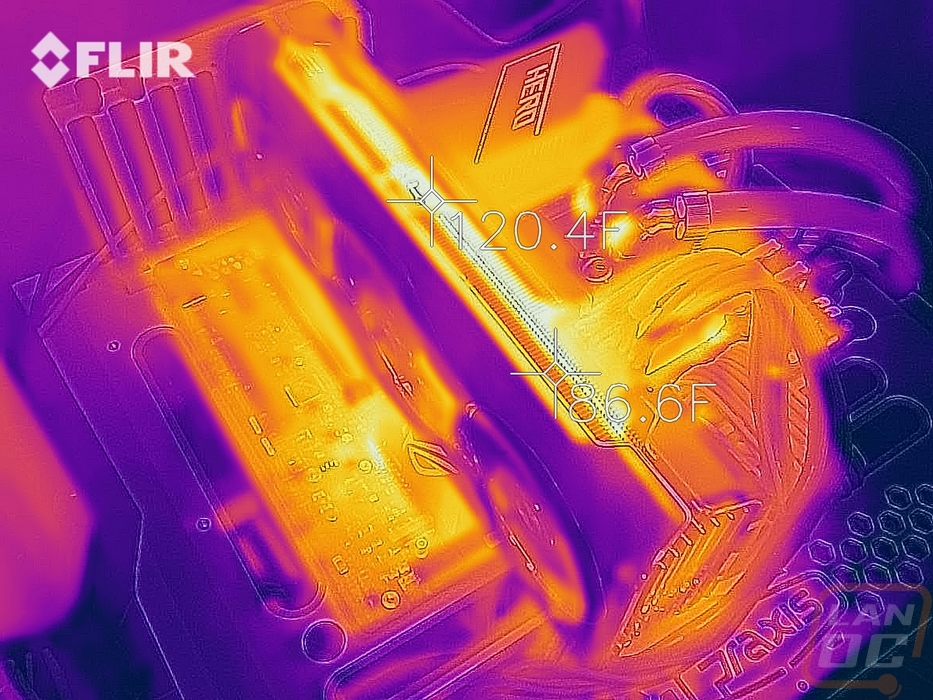