After checking out the RTX 2060 SUPER FE and seeing that it is basically a baby RTX 2070 I couldn’t wait to see what the RTX 2070 SUPER FE had going on. Nvidia gave it four additional SMs which in itself is a performance bump but then on top of that the 2070 SUPER also saw a big jump in both core clock and boost clock speeds. To go with that it moved from the PCB/cooler that the RTX 2060 and RTX 2070 used up to the same setup as the RTX 2080 including even adding multi-GPU back with NVLink support. Like with the 2060 SUPER this pushed the 2070 SUPER’s performance up closer to the RTX 2080 than the RTX 2070. This is the baby RTX 2080 now. 1080p performance is off the charts and perfect for someone who wants to game with a high refresh rate monitor even with some of today's newest games at their highest settings. 1440p is where it's at though everything is going to be playable with 21 out of 24 tests coming in at 60 FPS or much higher.

Like all of the other Founder Edition cards, the RTX 2070 SUPER Founders Edition stands out against all of the aftermarket cards with its all-metal cooler design. Even the cards that are using metal fan shrouds and backplates aren’t using cast parts like this and the Founders Edition feels so solid. Most aftermarket cards get a little GPU sag over time, even with a backplate, but I can’t imagine that happening with any of the Founders Edition cards. Visually the 2070 SUPER FE is different than everything else on the market, especially with everything being decked out in silver. If that wasn’t enough the addition of chrome to the design is surely going to be even more polarizing. It looks amazing in pictures and on our test bench, but if you want a blacked out build this is as far from that as you can get. Speaking of matching things with your build, Nvidia still has the top logo stuck in the bright green mode with no RGB option, the green looks good with the silver and chrome but I know I’m not the only one who wants to be able to set that to match my build. The only other issue is that the cooler, like the other RTX cards, is a little loud.

As far as pricing goes, the new RTX 2070 SUPER Founders Edition is listed at $499. Considering that performance is edging up closer to the RTX 2080 and the price is the same as the current RTX 2070 it seems to be a good value. With AMD launching a new card soon it will be very interesting to see how things compare. Right now Nvidia has a bundle to go with the RTX 2070 SUPER as well which gets you Control and Wolfenstein: Youngblood, two titles which are both slated to support ray tracing. Wolfenstein: Youngblood is coming out late in July and Control in August giving you time to enjoy both. I’m loving that both Nvidia and AMD have been partnering up with launch day bundles, new titles add a lot more value than older games, especially when they help you take advantage of the ray tracing support. Now I wouldn’t consider the RTX 2070 SUPER a value card unless you are looking to game at 1440p. While the RTX 2060 looks to be staying in Nvidia’s lineup at $349, the RTX 2070 and RTX 2080 weren’t listed in Nvidia’s current lineup/pricing information, but it makes sense as the RTX 2070 is nearly passed up by the RTX 2060 SUPER at a better price and the RTX 2080 isn’t that far ahead of the 2070 SUPER making them a little unneeded in the lineup. It will be interesting to see how pricing on those cards change if they are being phased out. But as of right now at least, in the $500 range you aren’t getting better than the RTX 2070 SUPER for a new card. 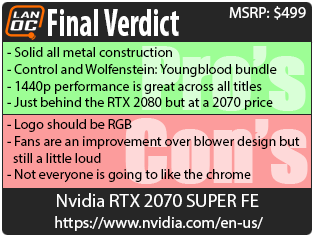 You might call him obsessed or just a hardcore geek. Wes's obsession with gaming hardware and gadgets isn't anything new, he could be found taking things apart even as a child. When not poking around in PC's he can be found playing League of Legends, Awesomenauts, or Civilization 5 or watching a wide variety of TV shows and Movies. A car guy at heart, the same things that draw him into tweaking cars apply when building good looking fast computers. If you are interested in writing for Wes here at LanOC you can reach out to him directly using our contact form.
Discuss this article
Log in to comment
Posts in discussion: Nvidia RTX 2070 SUPER Founders Edition