Now we finally get into the in game performance and that is the main reason people pick up a new video card. To test things out I ran through our new benchmark suite that tests 16 games at three different resolutions (1080p, 1440p, and 4k). I also slipped in a few variations on the same games for comparisons like DX11 to DX12, OpenGL to Vulkan, and a couple of games are just tested at their highest setting and lower but still high detail options to show the performance difference when things are turned down slightly. In total, each video card is tested 75 times and that makes for a huge mess of graphs when you put them all together. To help with that I like to start off with these overall playability graphs that take all of the results and give an easier to read the result. I have one for each of the three resolutions and each is broken up into four FPS ranges. Under 30 FPS is considered unplayable, over 30 is playable but not ideal, over 60 is the sweet spot, and then over 120 FPS is for high refresh rate monitors. This covers all of the games tested except Final Fantasy XV that we have a score rather than an FPS because they like to be different.

So how did the RTX 2070 SUPER Founders Edition perform? Well, 1080p performance wasn’t an issue at all, the 2070 SUPER ripped through all of those games with 10 games up over 120 FPS as well and not even one under 60 FPS. 1440p is nearly the same with 18 games in the 60-119 FPS range and another even higher up above 120 that left just three games at 1440p that were below 60 FPS at all. Two of those were our newest additions at their highest detail settings (Metro Exodus and Total War: Three Kingdoms) and the last was Ghost Recon Wildlands at its ultra detail. All of those were in the 56 FPS range so while not above 60 FPS, still very close. Then at 4k we finally see a game down below 30 FPS and a majority of the games below 60. You could play at 4k, but it is going to require turning the detail a little if you want the smoother 60+ FPS or you will have to live in that 30-60 FPS range at high detail settings. All in all, the RTX 2070 SUPER is a monster at 1080p, great at 1440p, and could get you by at 4k.

I did also test using Final Fantasy XV which doesn’t give us FPS results so they are kept split up from the other games. Here the 1080 Ti still outperformed the RTX 2070 SUPER but only by a very small margin. This was still a good jump up from even the overclocked RTX 2070s, but the 2080 is still well ahead in this test. The same can’t be said on the DLSS vs TAA test, with the detail turned all the way up the RTX 2080 and RTX 2070 SUPER even out. The importance of that test, however, is to show how using DLSS with the Tensor cores can boost performance up significantly at otherwise the same detail. This, like ray tracing, is still making its way into more games. But it uses AI to predict the “perfect frame” and to get higher detail without having to render at as high of a resolution. 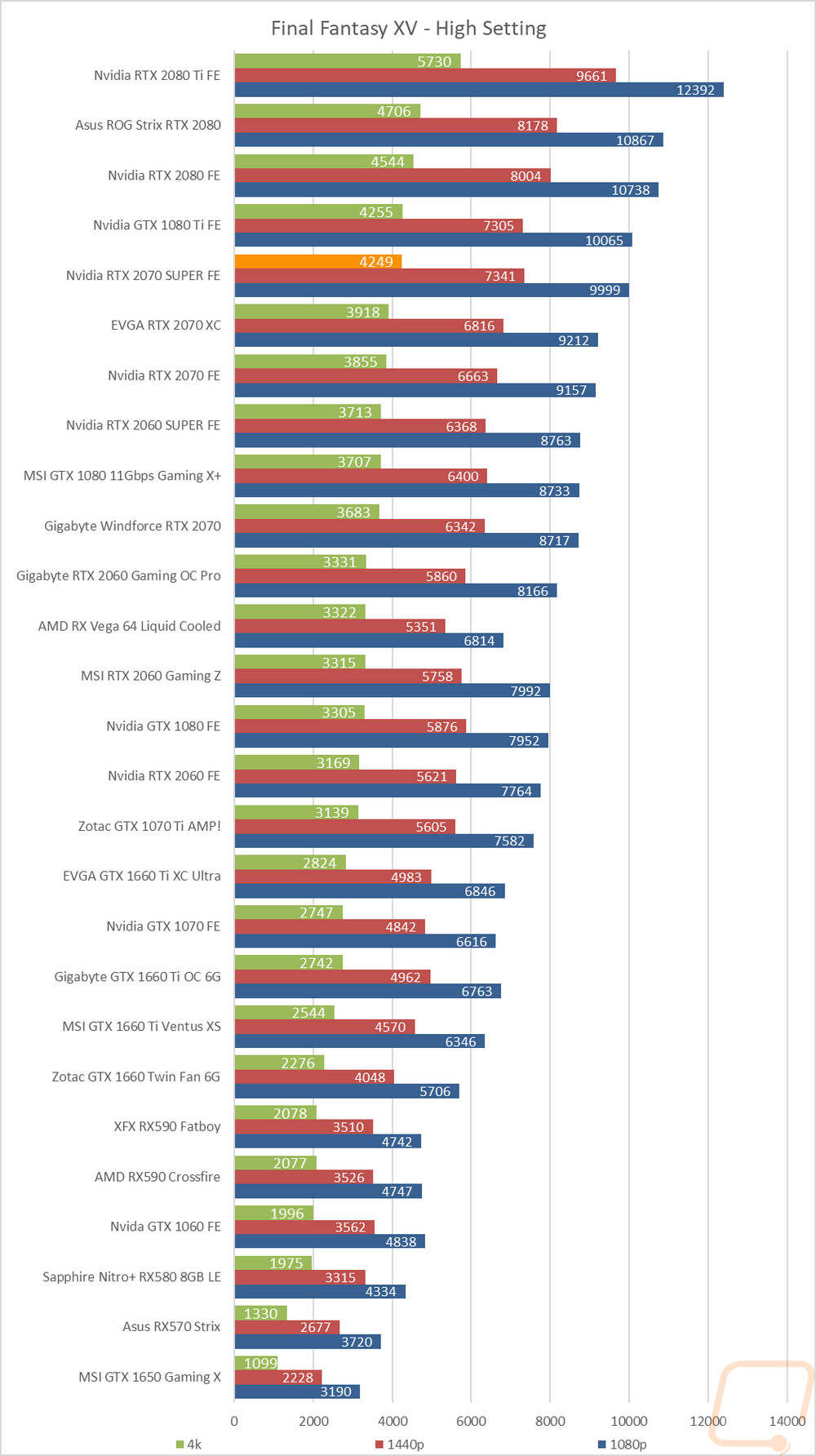 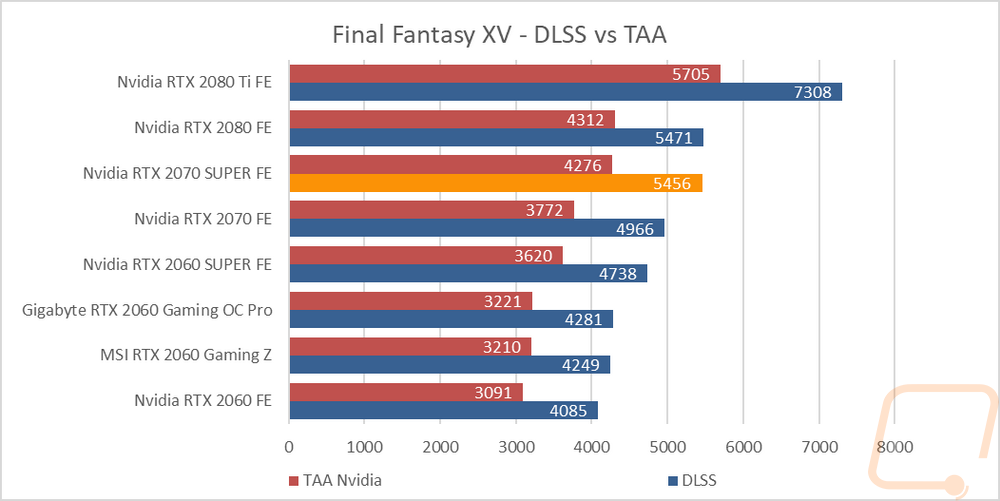 As always I have all of the detailed graphs as well for the crazy people like myself. 24 different tests, all run at three different resolutions across 10-27 cards, that is a lot of data! So here I want to see where the RTX 2070 SUPER FE comes in comparison to other cards. I also want to look for any weird results. In most of the tests the RTX 2070 SUPER came in just a little behind the RTX 2080, there were a few tests were the higher clock speeds helped and it did outperform the older RTX 2080 FE but only by a small margin like in the DOOM Vulkan test, Hitman DX 11, and Far Cry 5 with normal detail. The 2070 SUPER really is no longer in the same class as the original RTX 2070, even the overclocked cards were still down in performance compared to it. The GTX 1080 Ti does slip in a few tests faster, as does the Vega 64 but as a whole, it is the 2080 Ti, 2080, 2070 SUPER, then everything else. Games like F1 2017 which are a little less demanding just like today's esports titles like LoL, DOTA 2, and CS:GO were all nearing the 200 FPS range at 1080p and would also support high refresh rates at 1440p as well. The difference between DX11 and DX12 in Hitman was 20 FPS at 1080p, 10 at 1440p, but then at 4k, they evened out. OpenGL to Vulkan also had around a 30 FPS jump but at all resolutions. 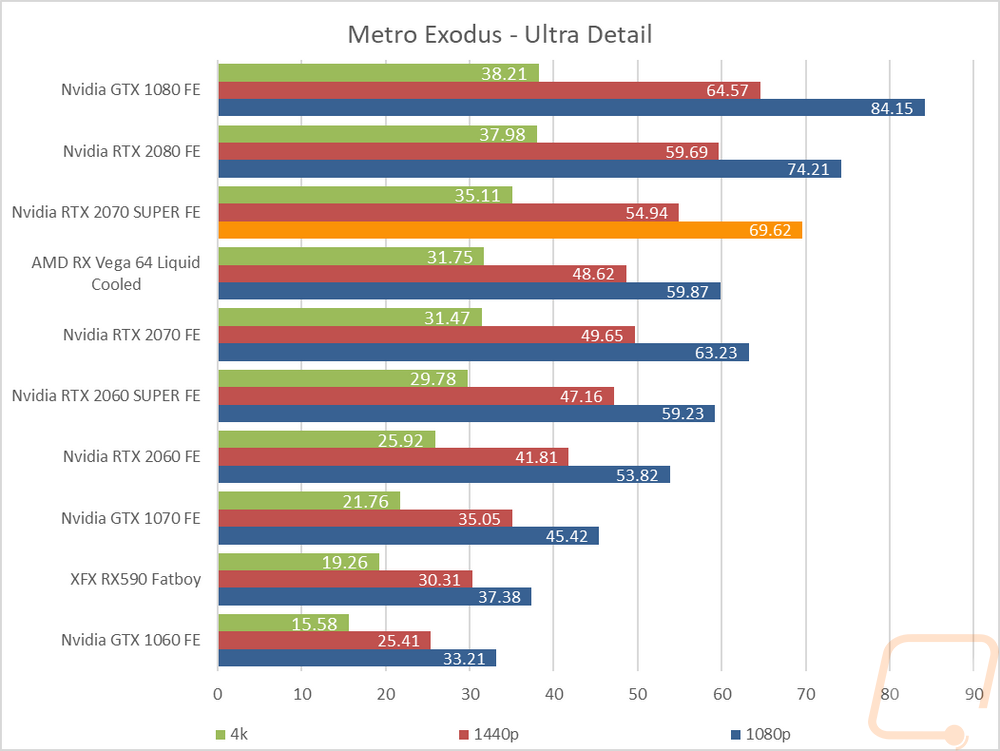 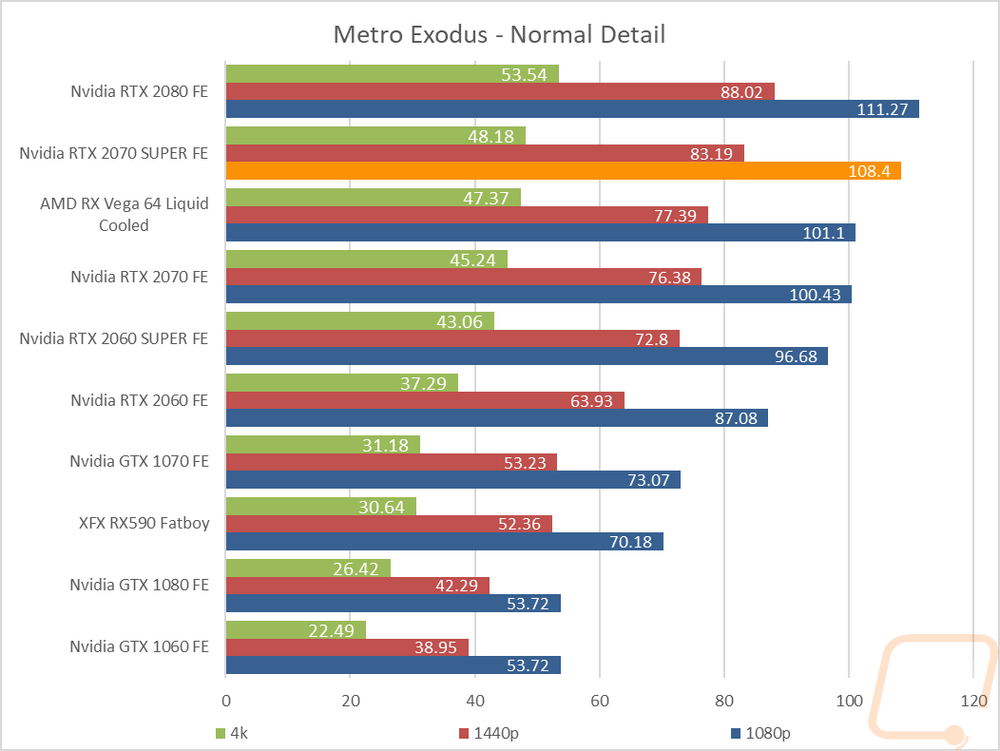 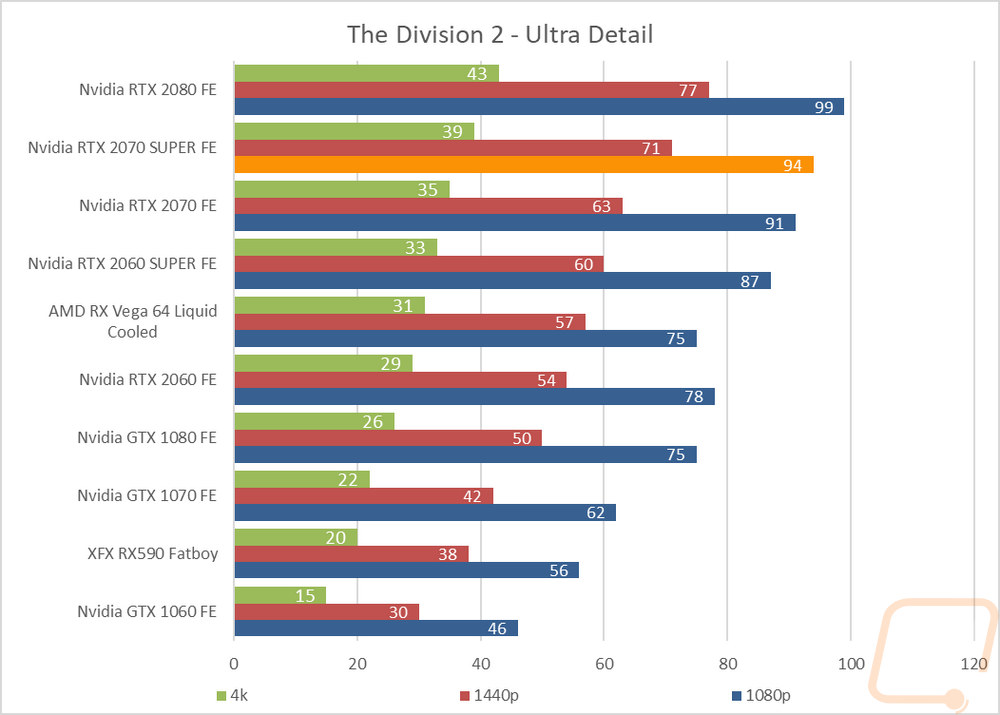 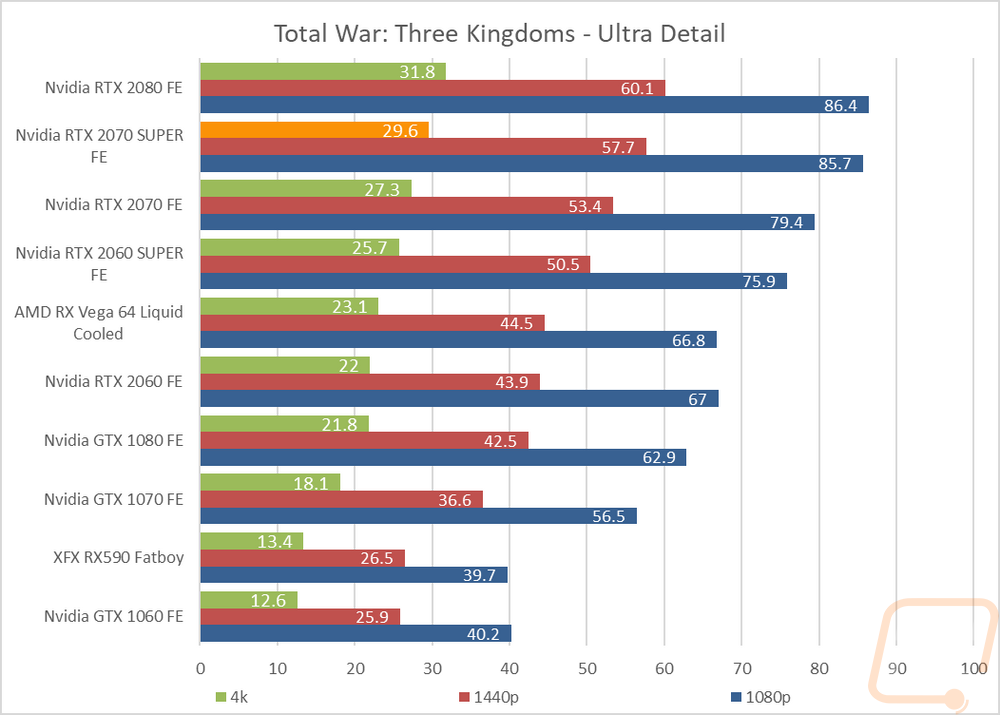 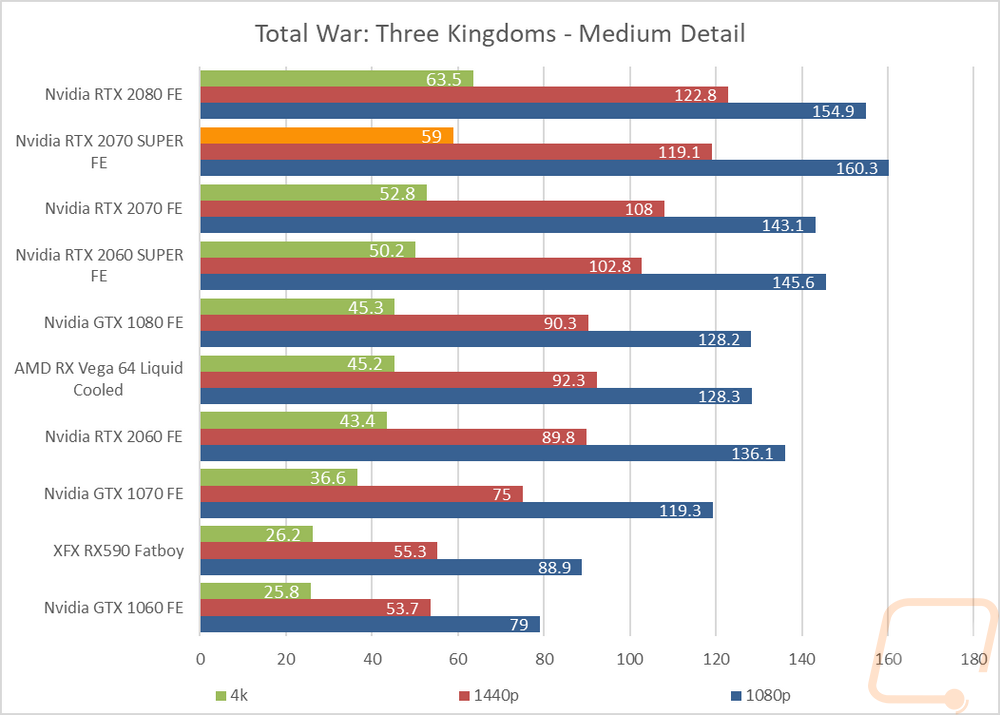 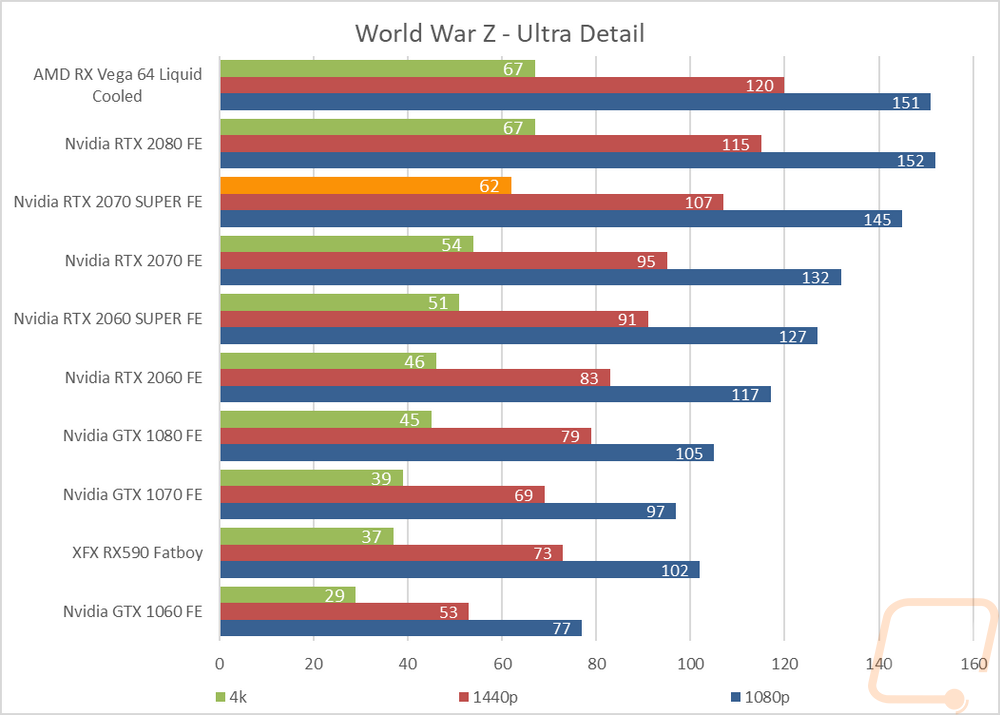 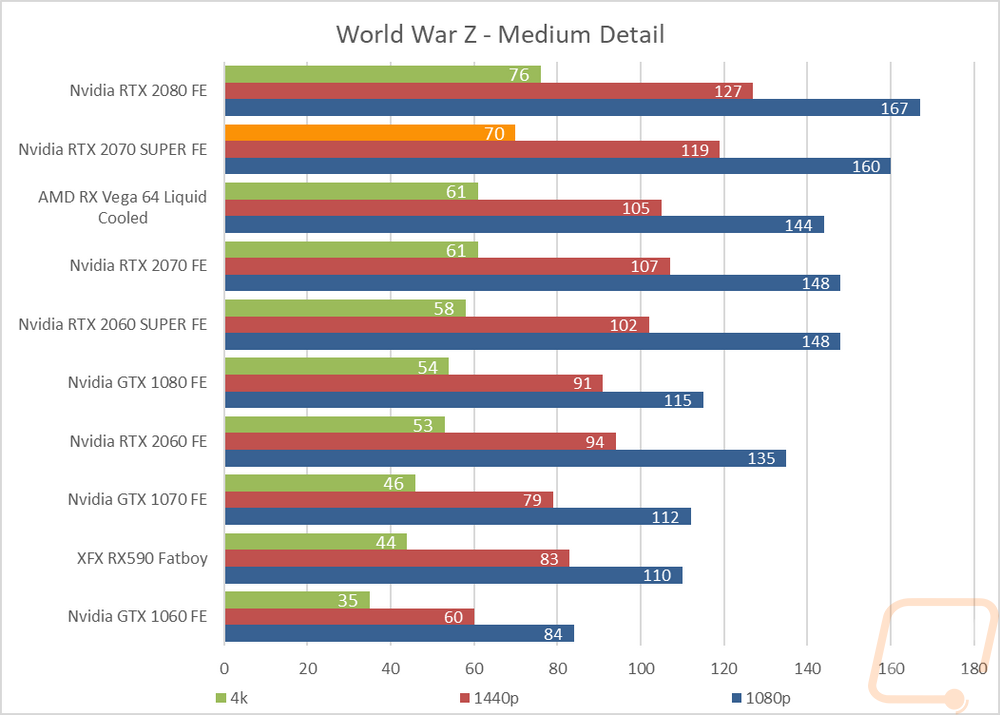 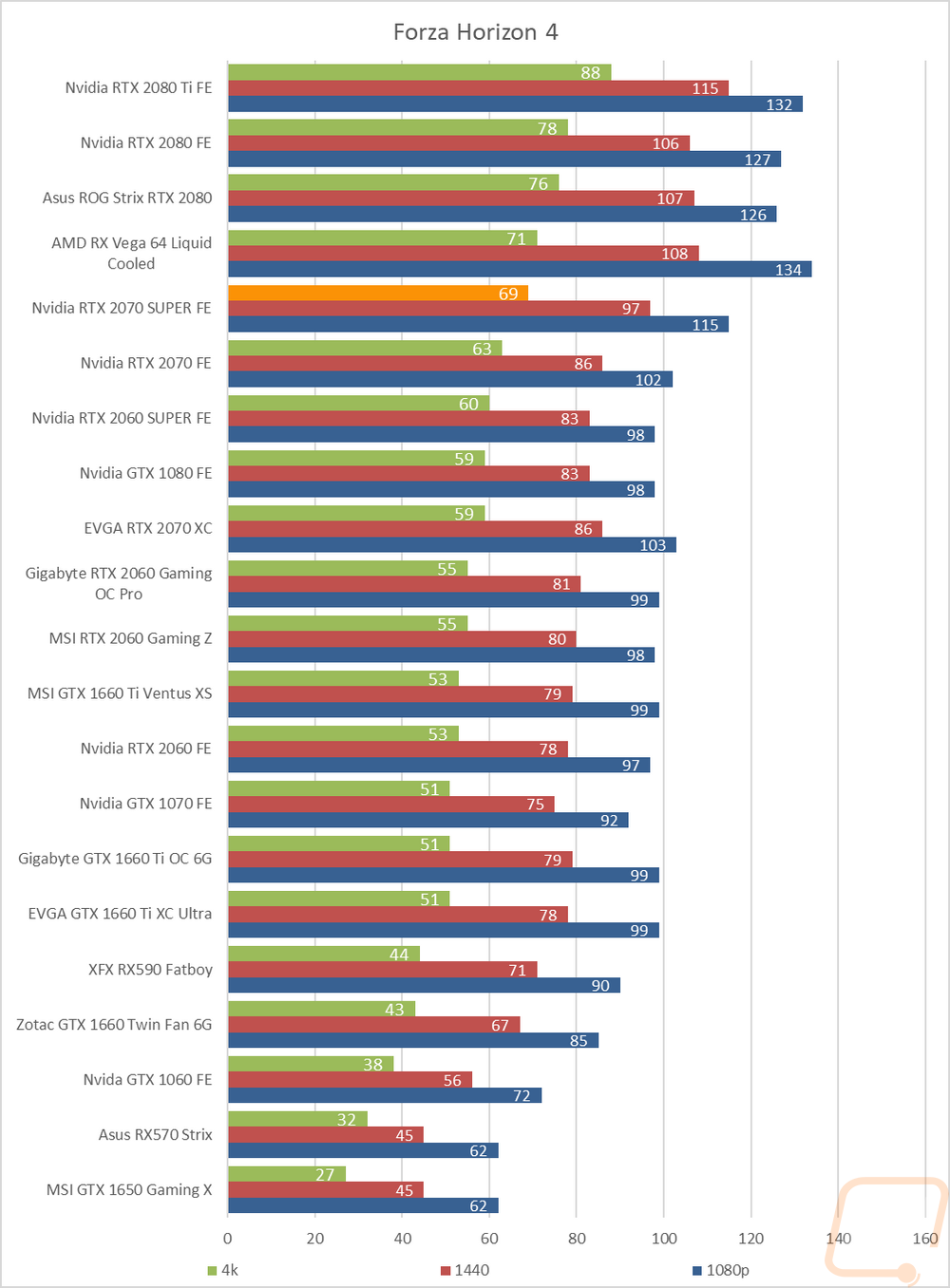 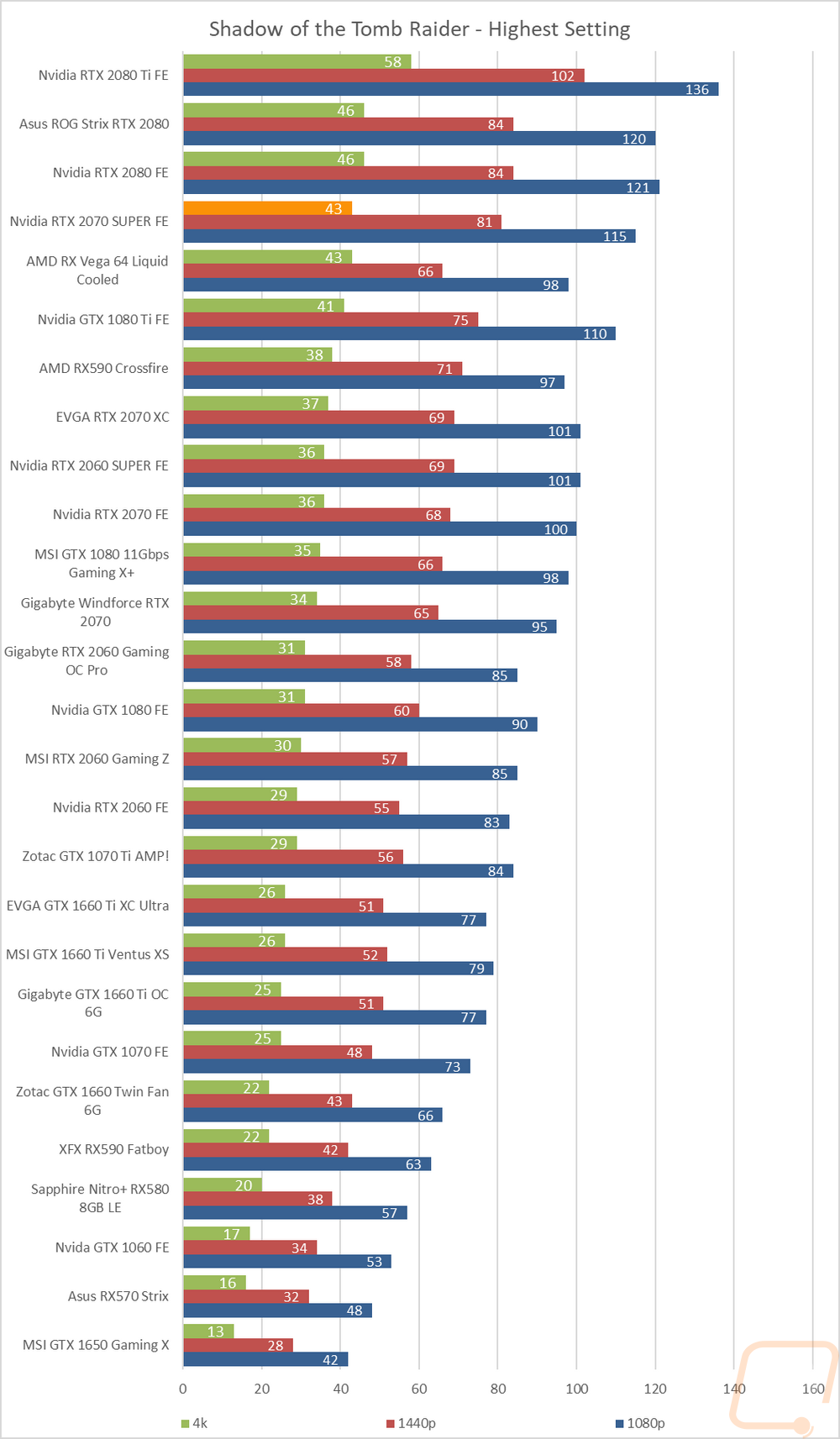 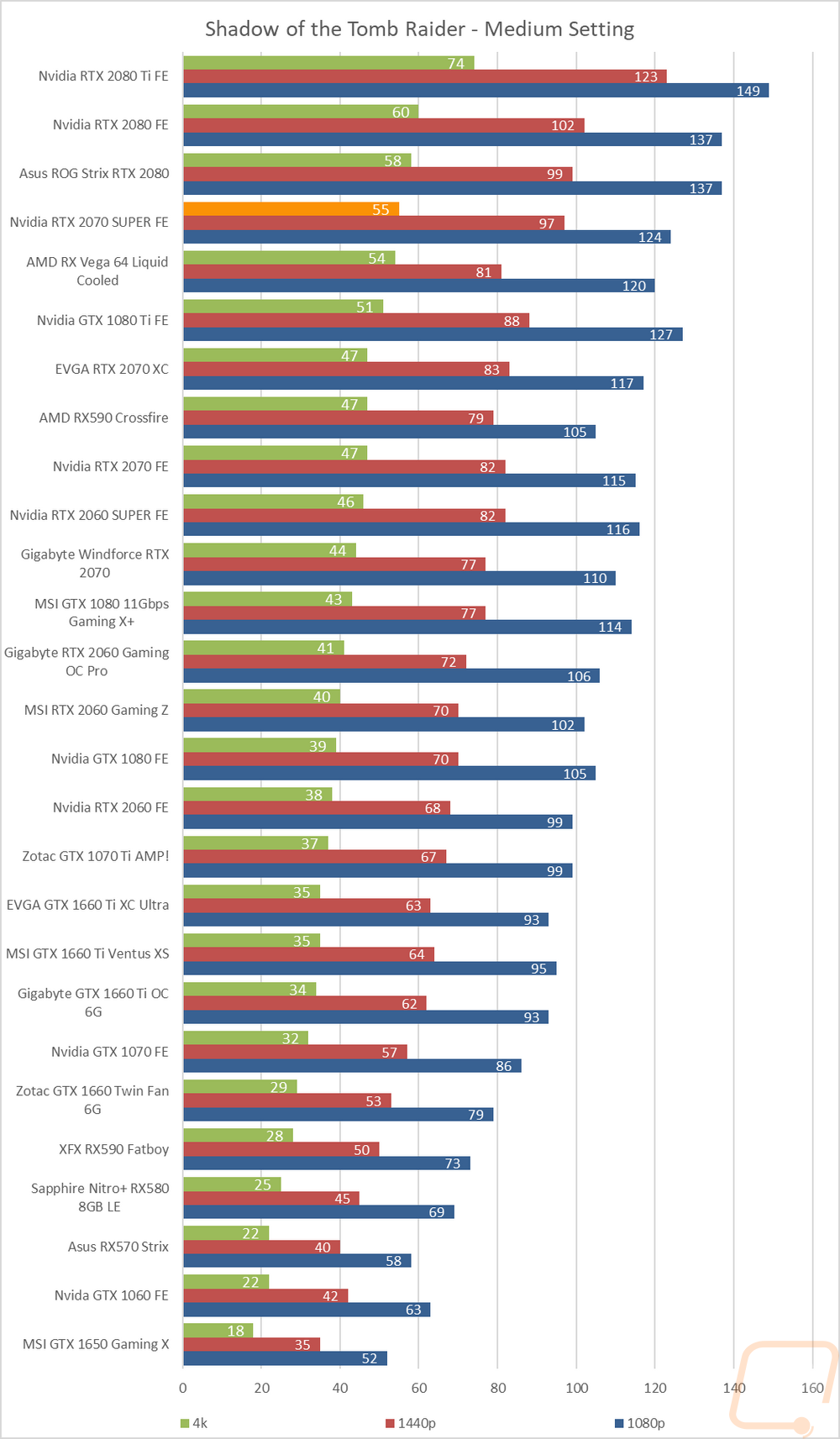 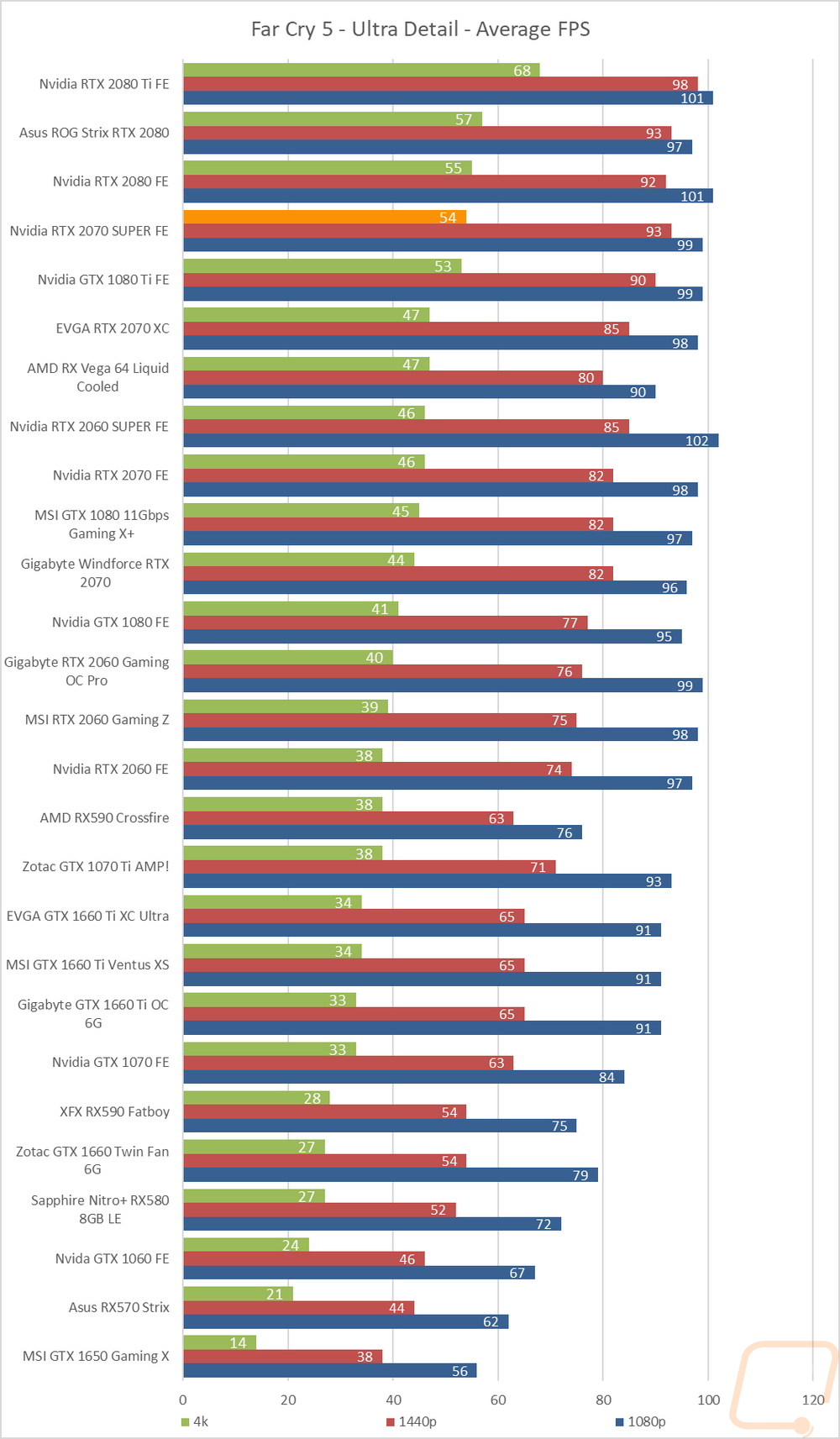 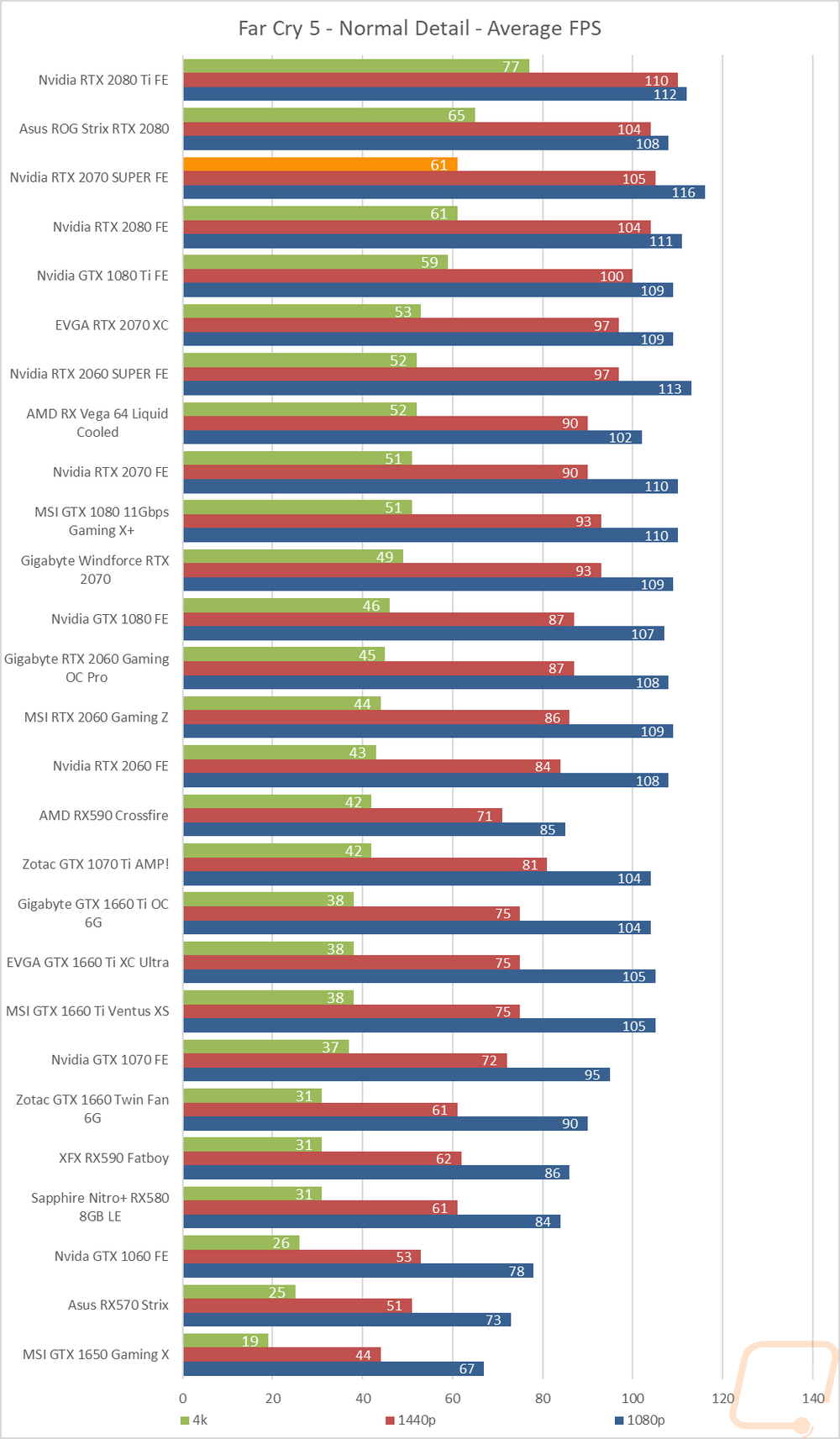 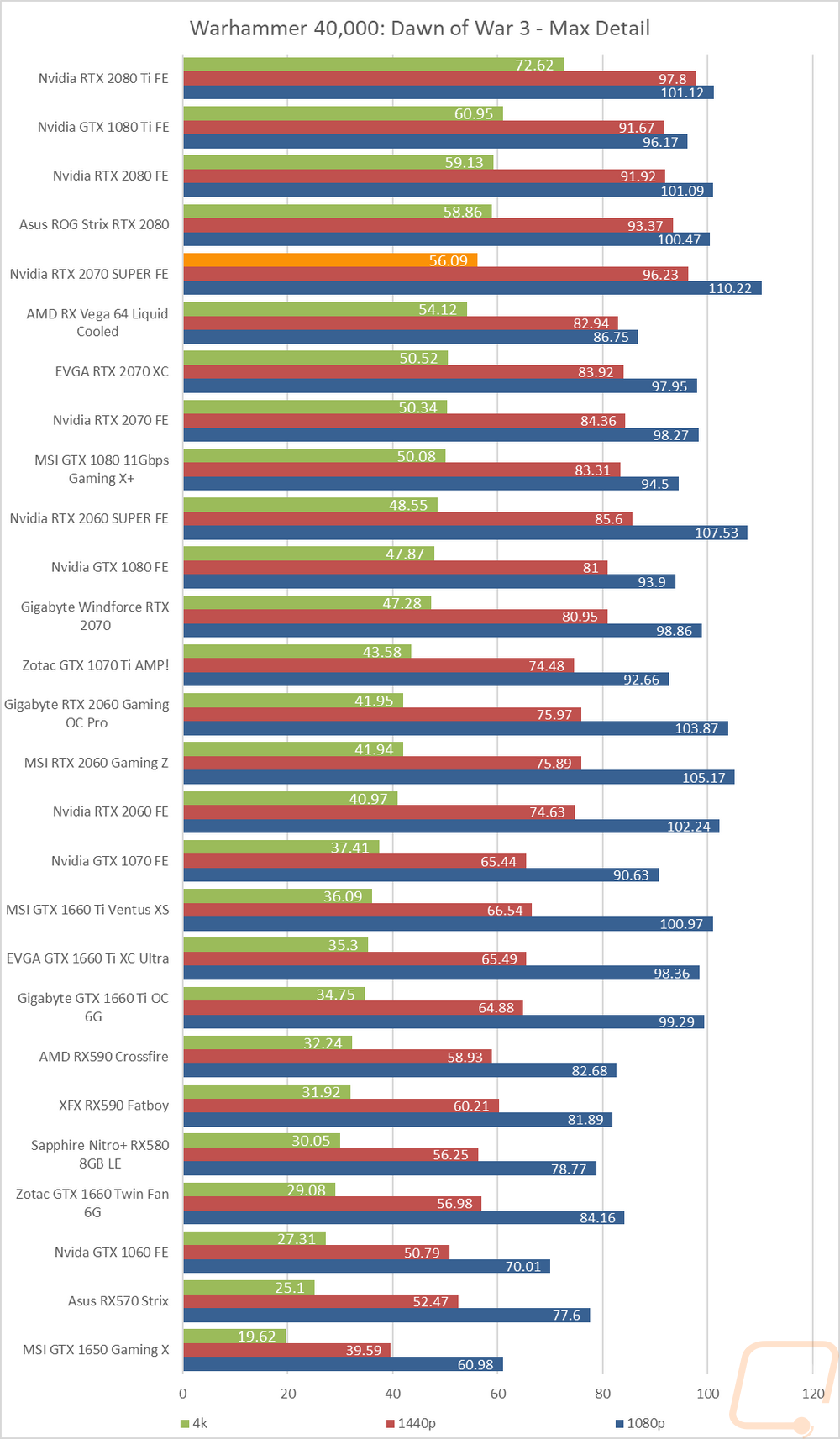 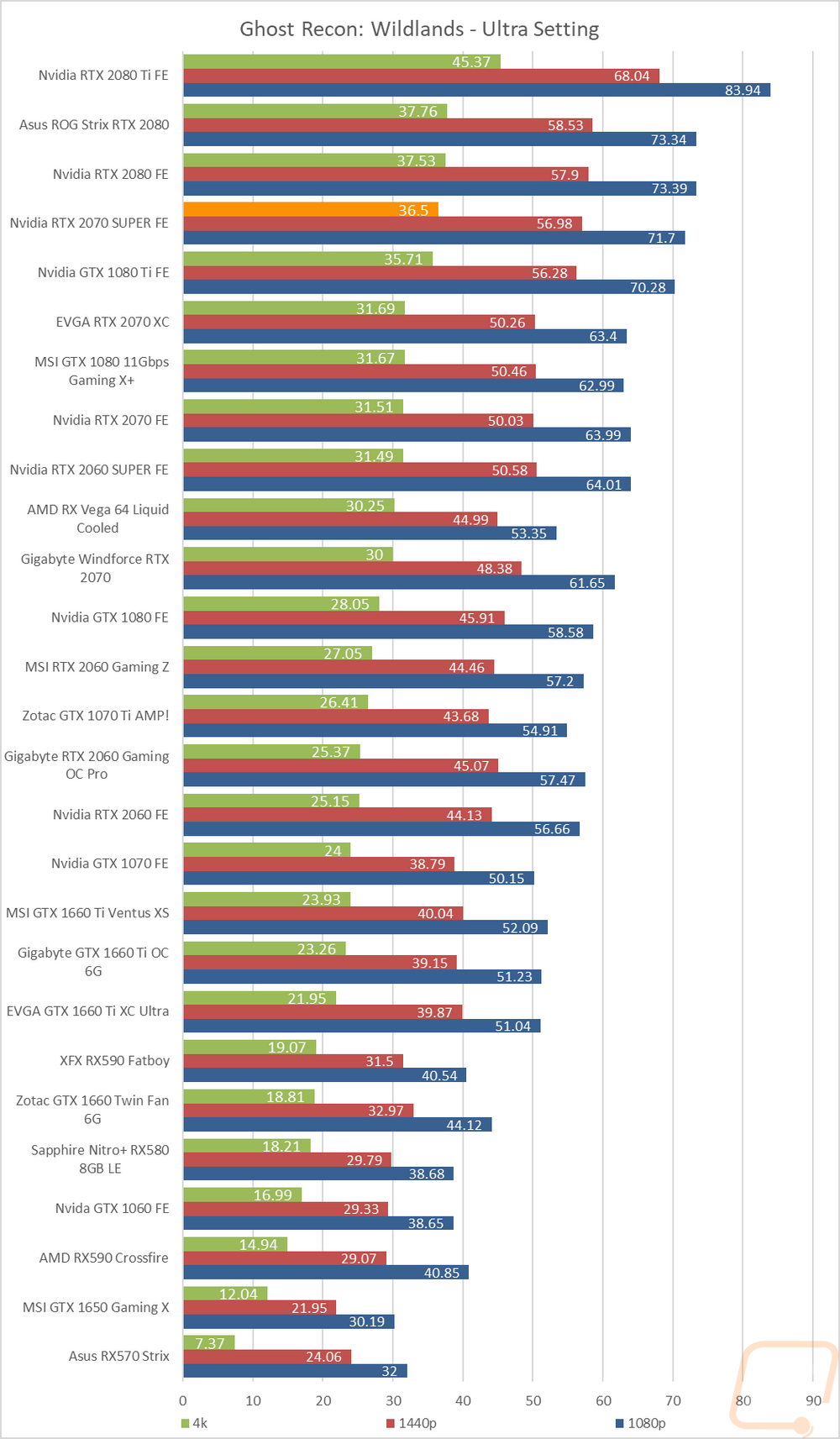 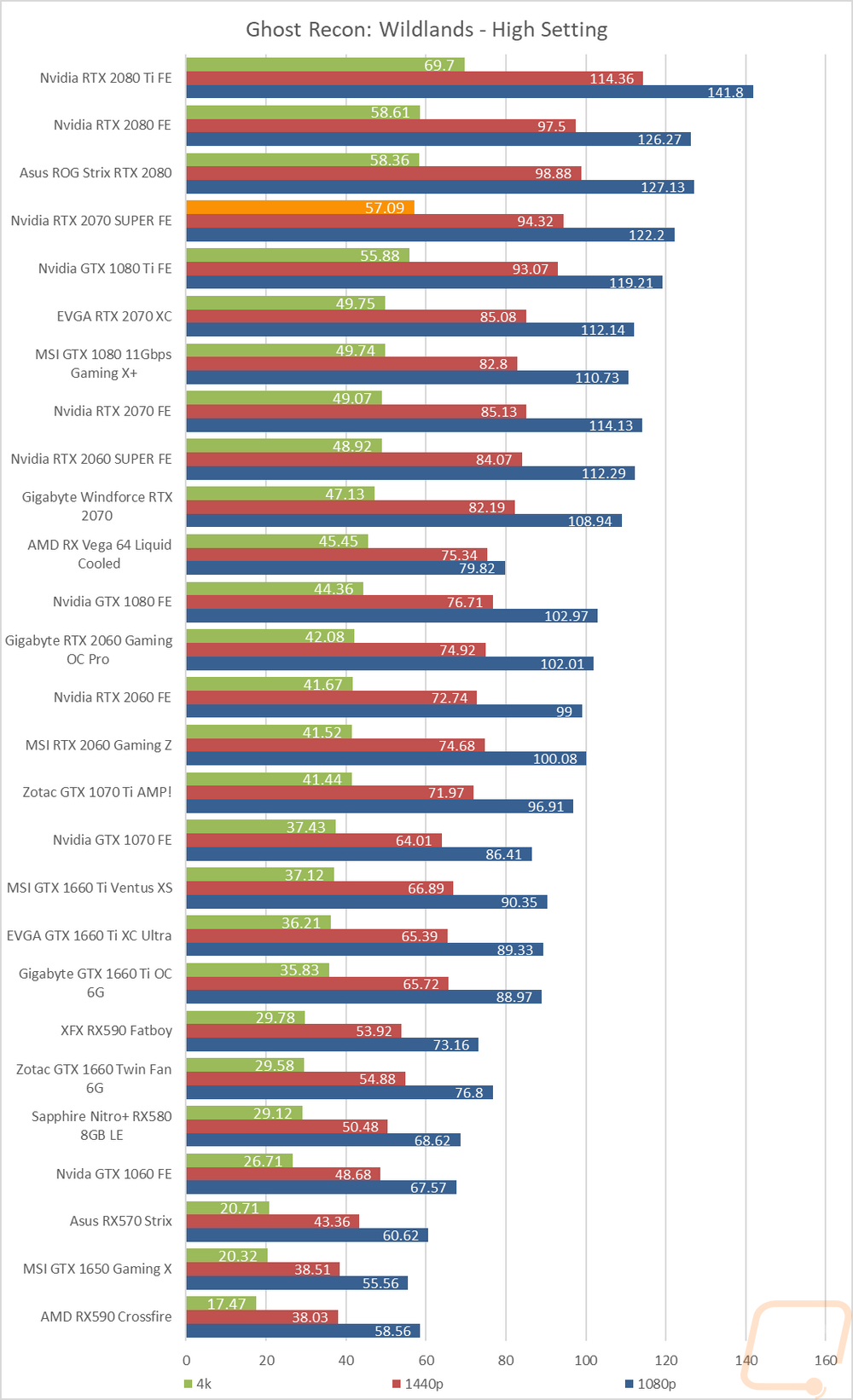 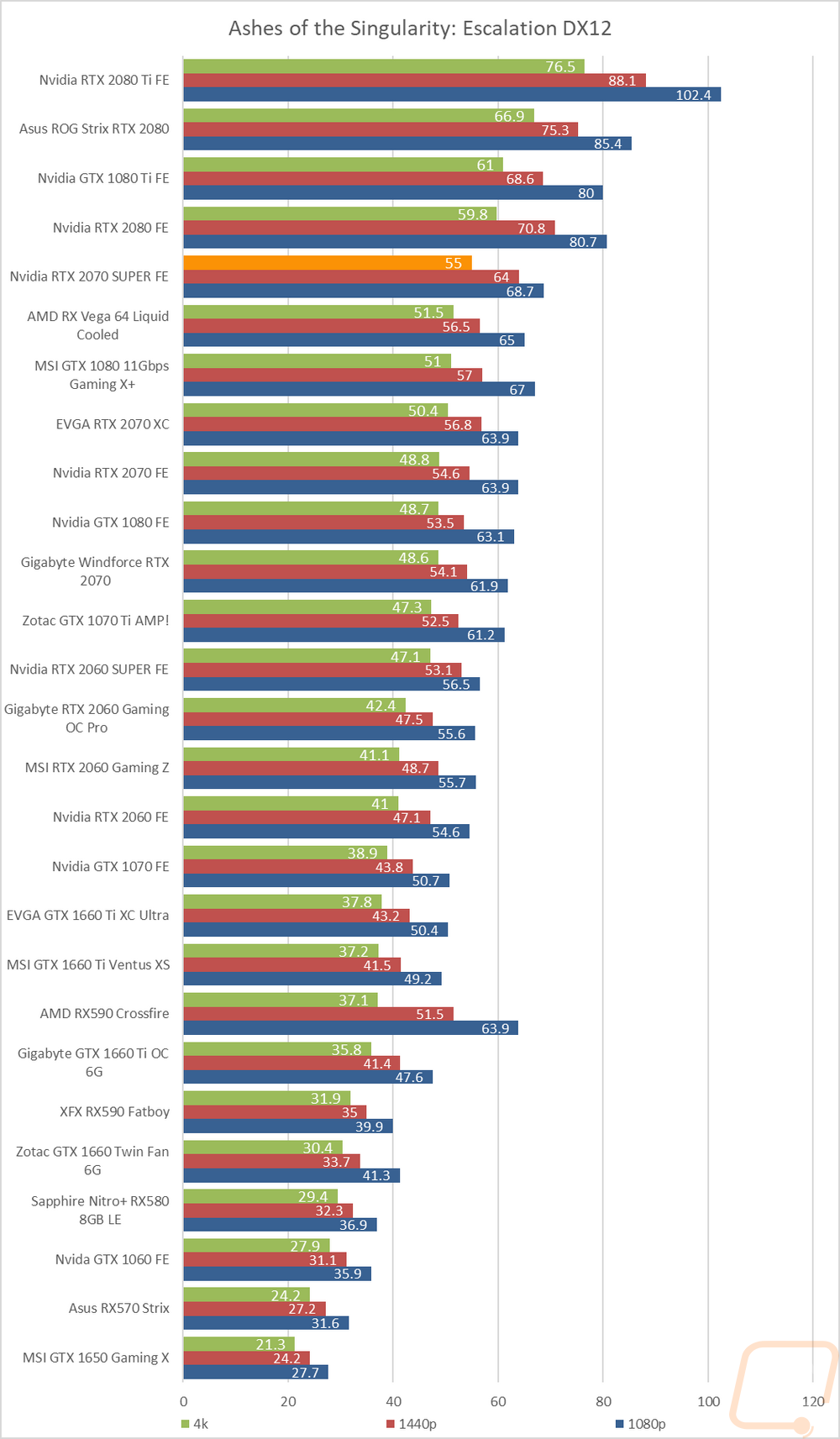 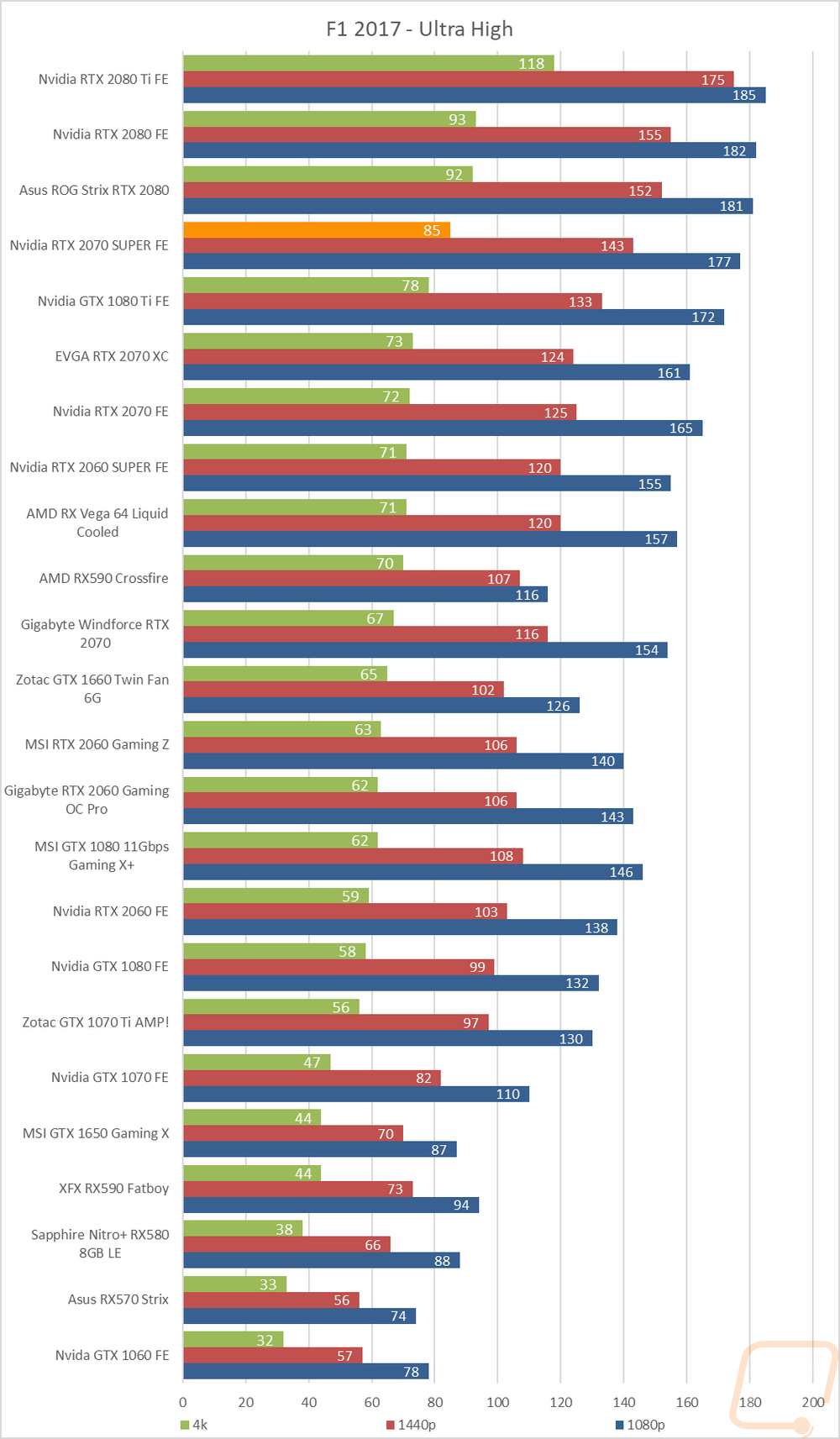 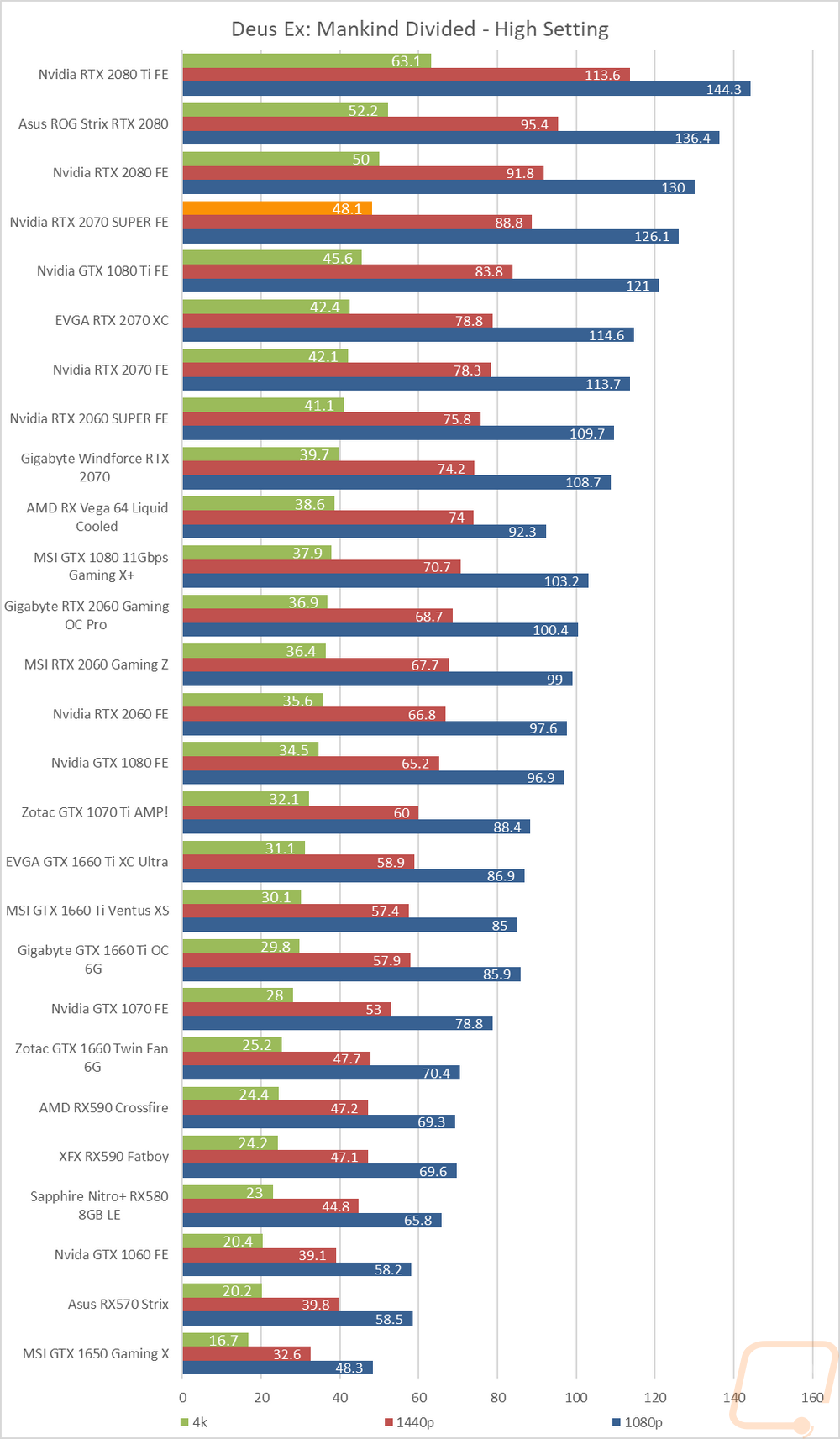 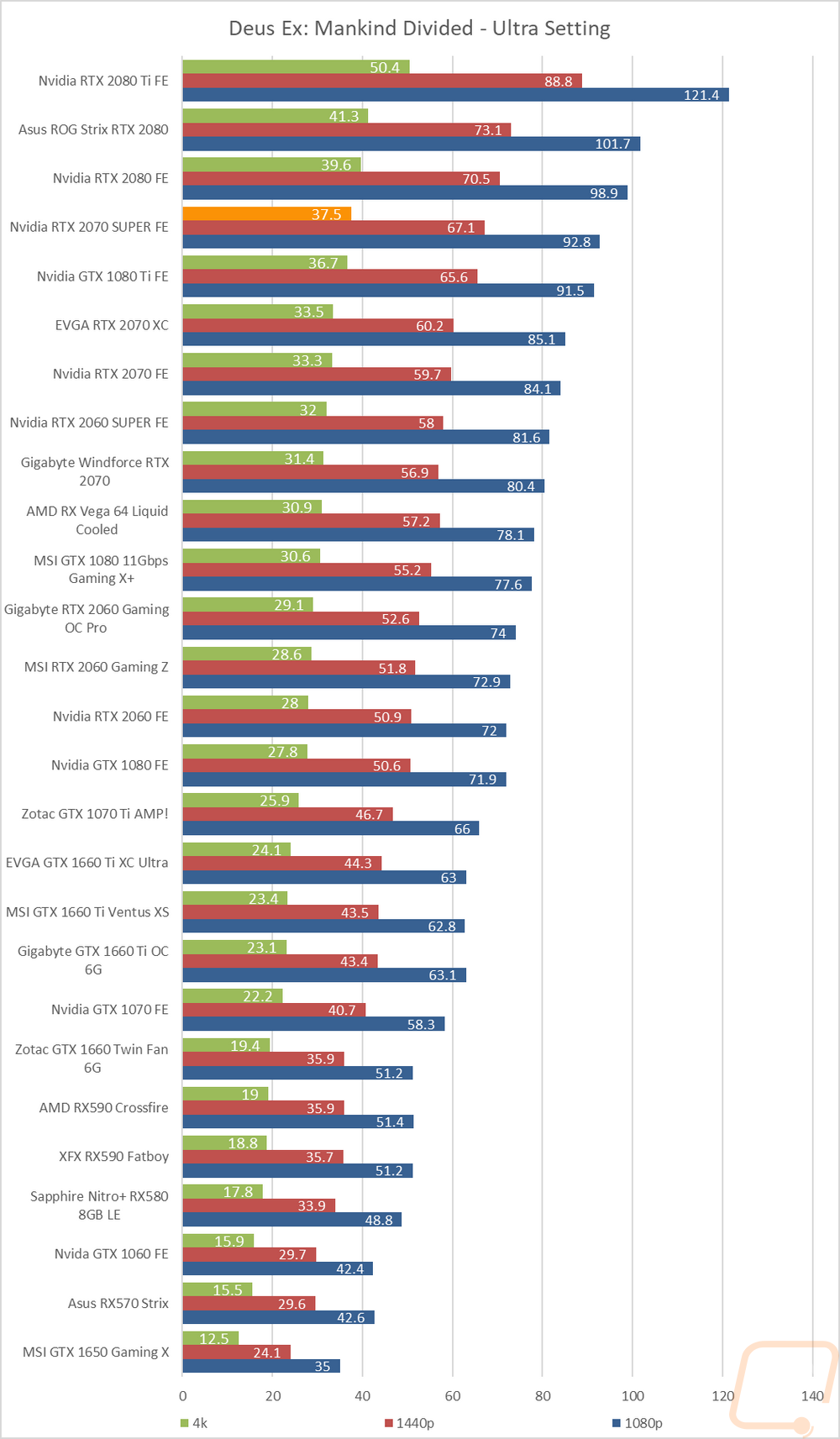 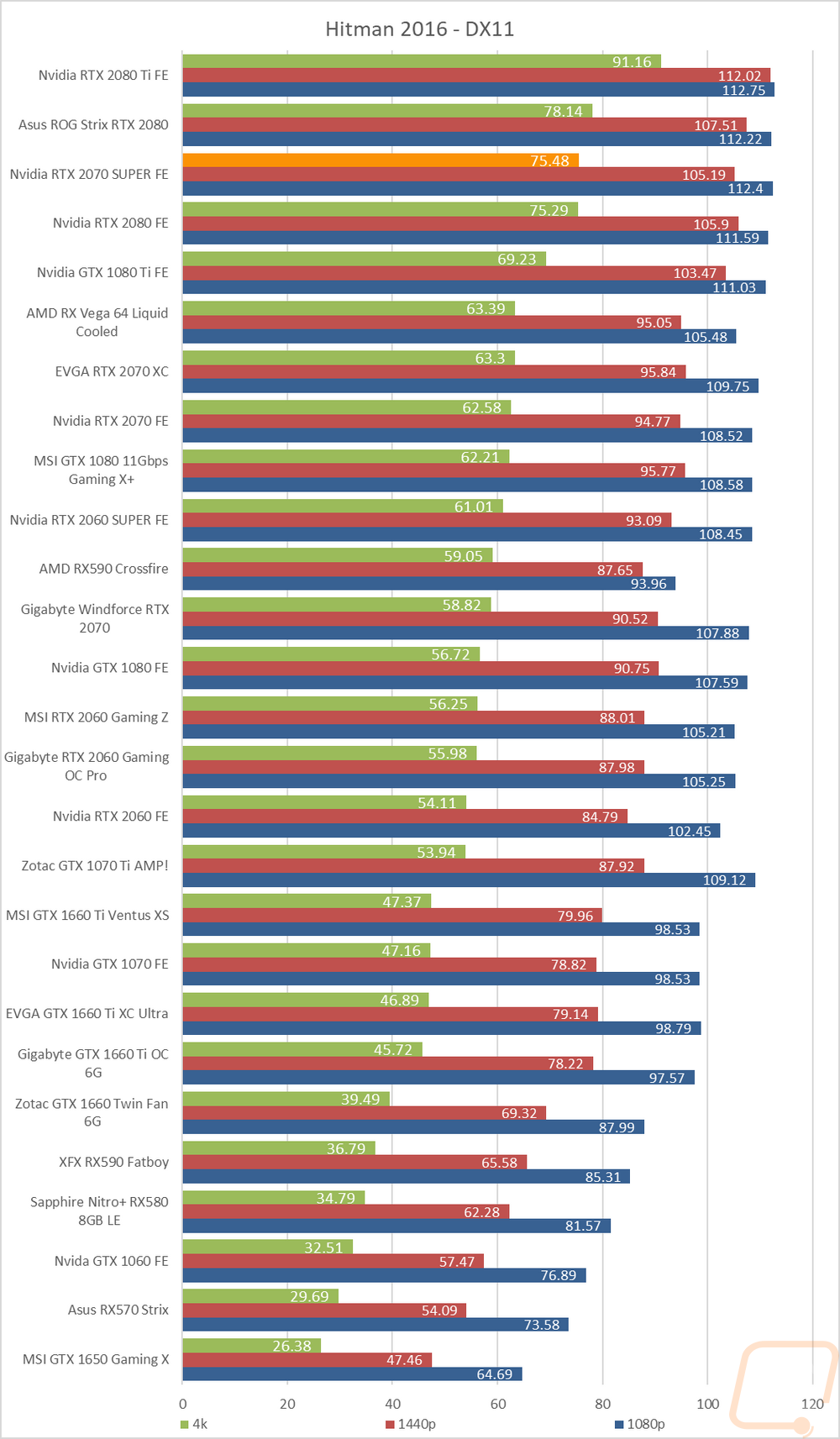 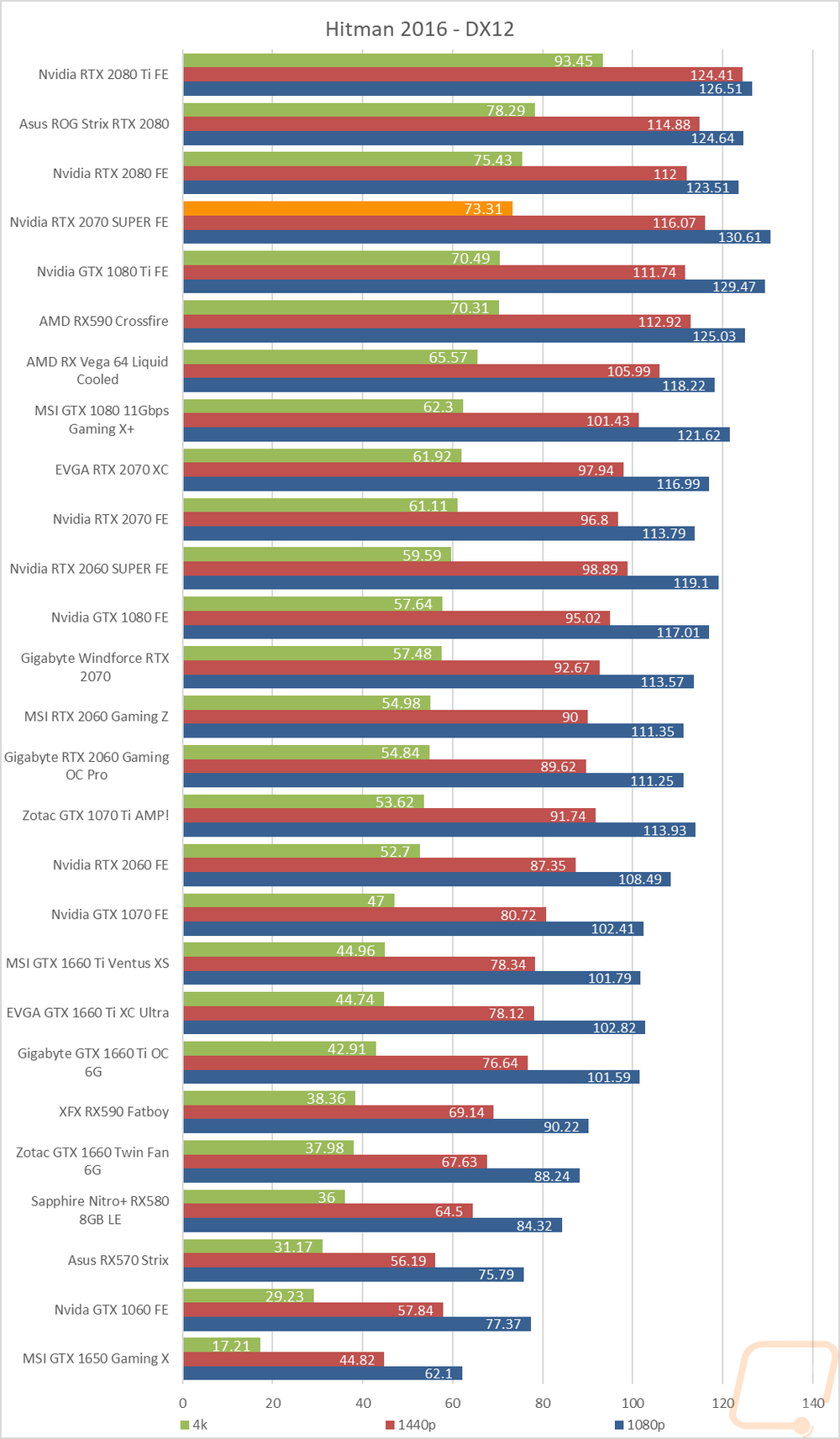 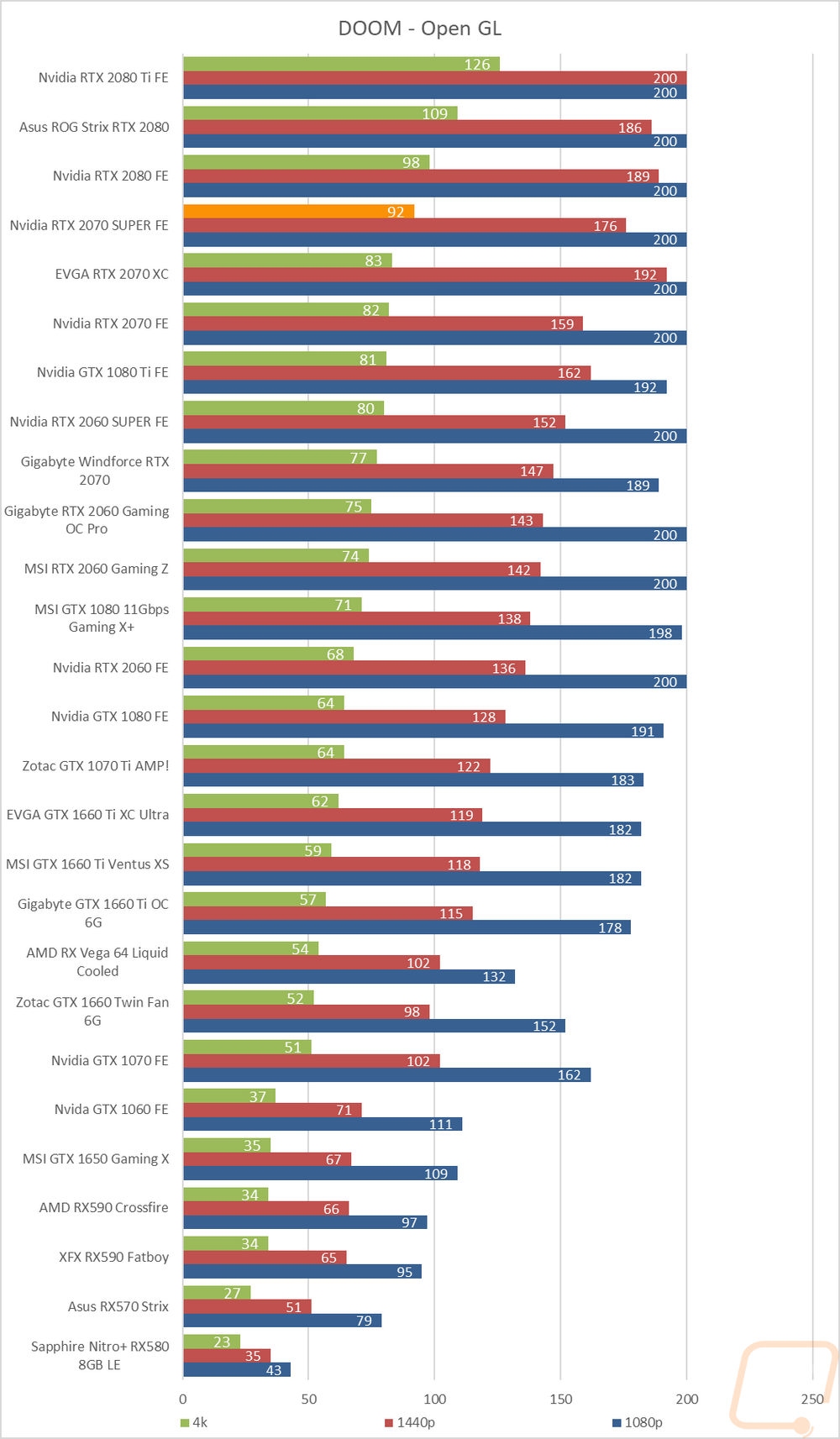 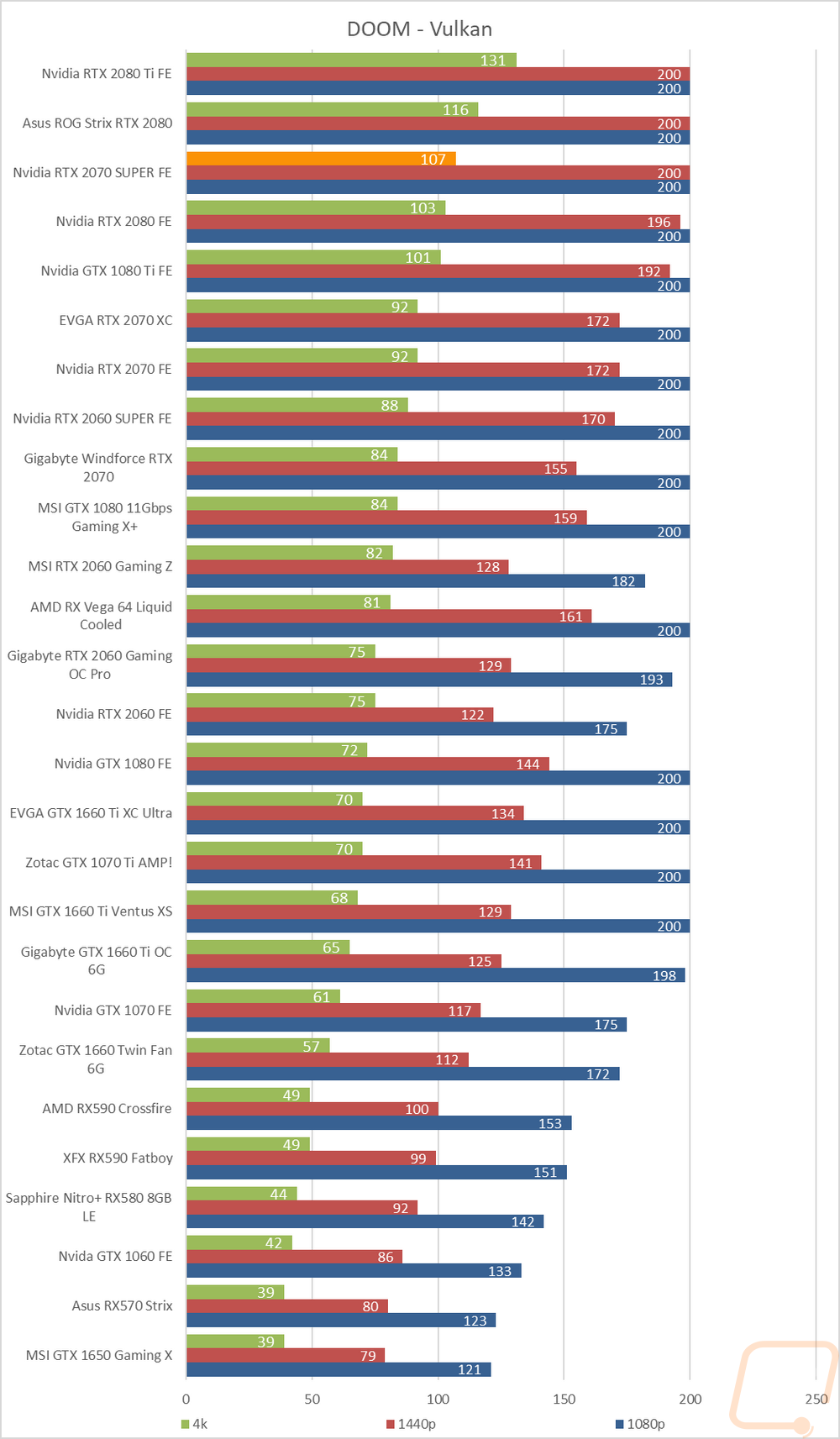 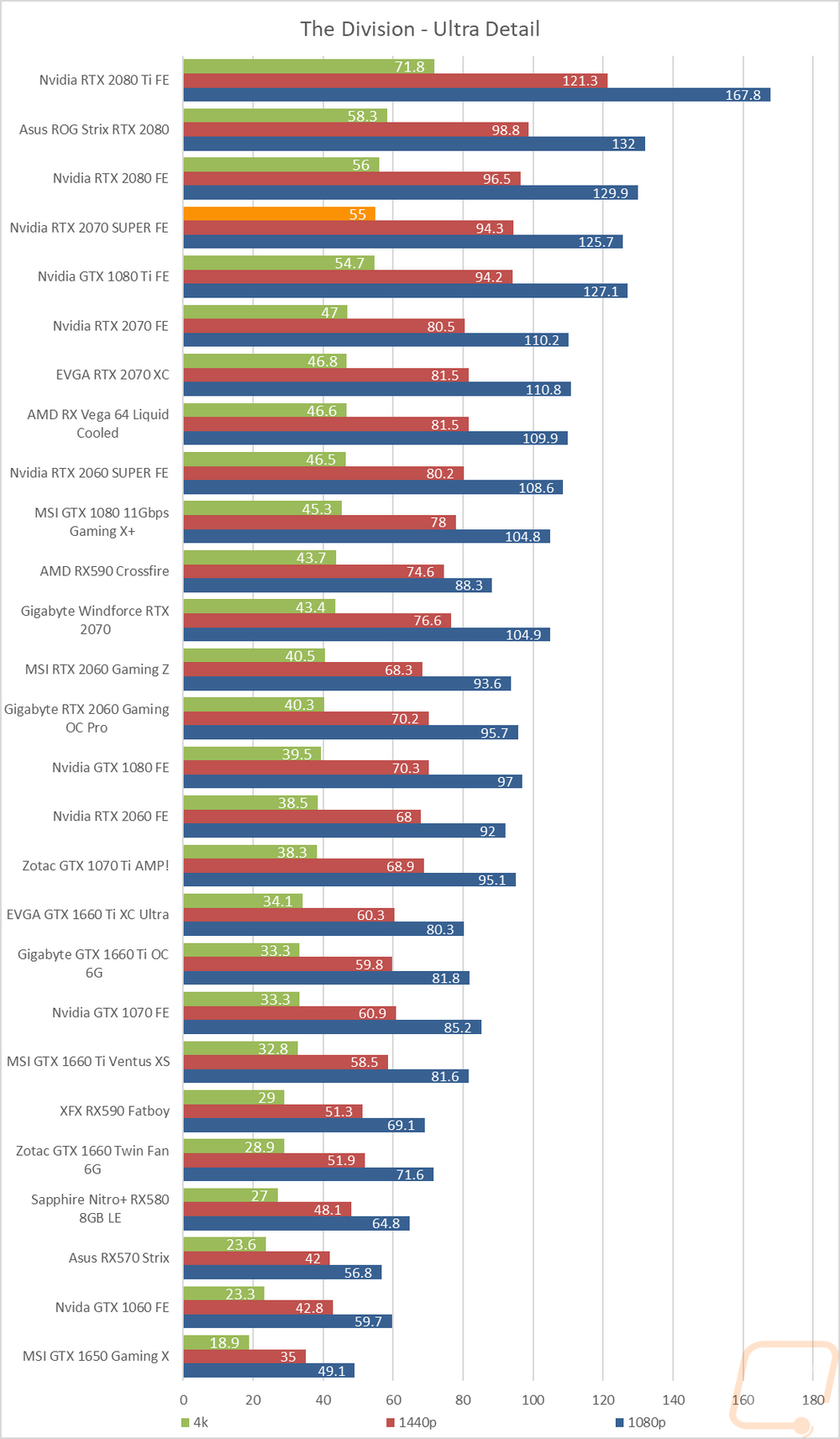