While gaming and compute performance are the most important when picking which GPU you want to go with. Once you decide on a GPU the cooling, noise, and power all are important when deciding which card you want. They are what set different models from the same AICs apart along with relatively small overclocks. Power, for example, determines how big of a power supply you might need, not to mention power usage over years of gaming. For testing that I hooked our entire test system up to a Kill-A-Watt and monitored the max wattage pulled when under load. For load, I did two different tests. One with 3DMark Fire Strike on the combined run which loads the video card and the CPU similar to a normal game and the second test with AIDA64’s stress test loading the video card. With 3DMark the 2070 SUPER pulled 425 watts which was just below the RTX 2080 with a similar configuration and 32 watts more than the original RTX 2070 FE. With AIDA64 the total wattage pulled is less without the CPU being added in, but it does put the video card under a little more stable of a load. Here the 2070 SUPER pulled 280 watts, 10 watts more than the RTX 2070 FE. 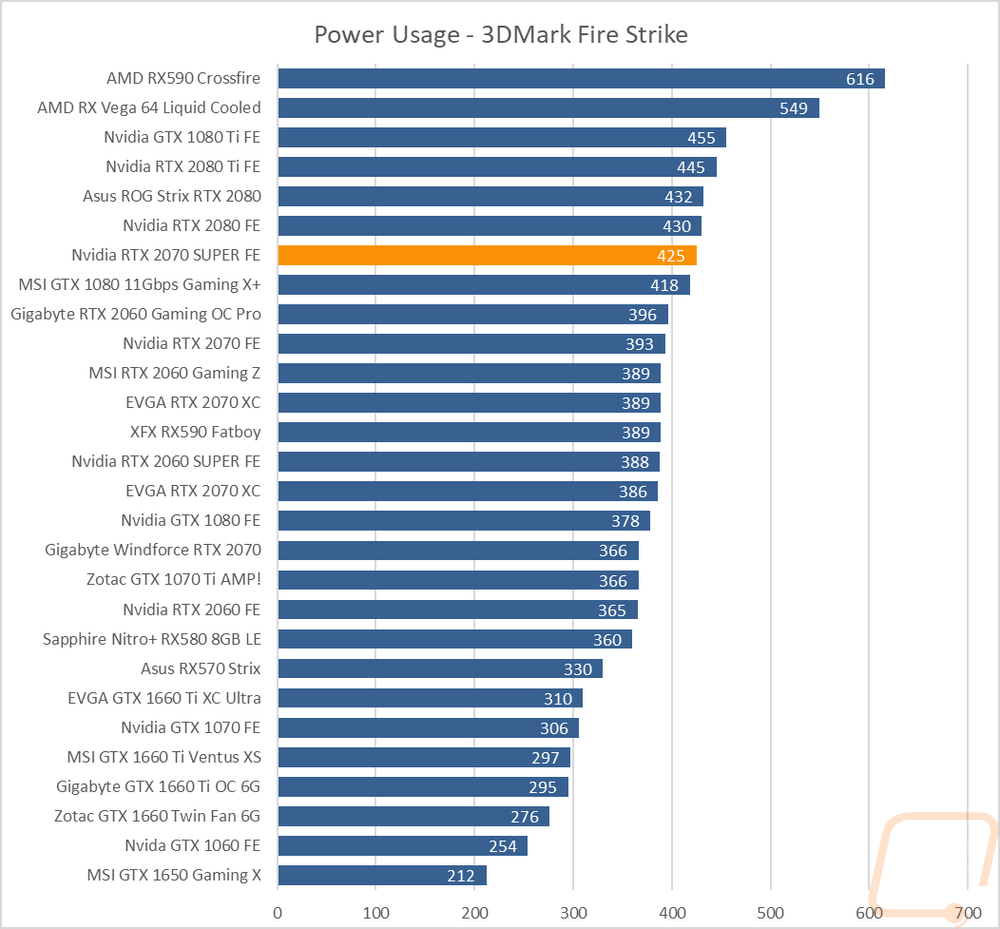 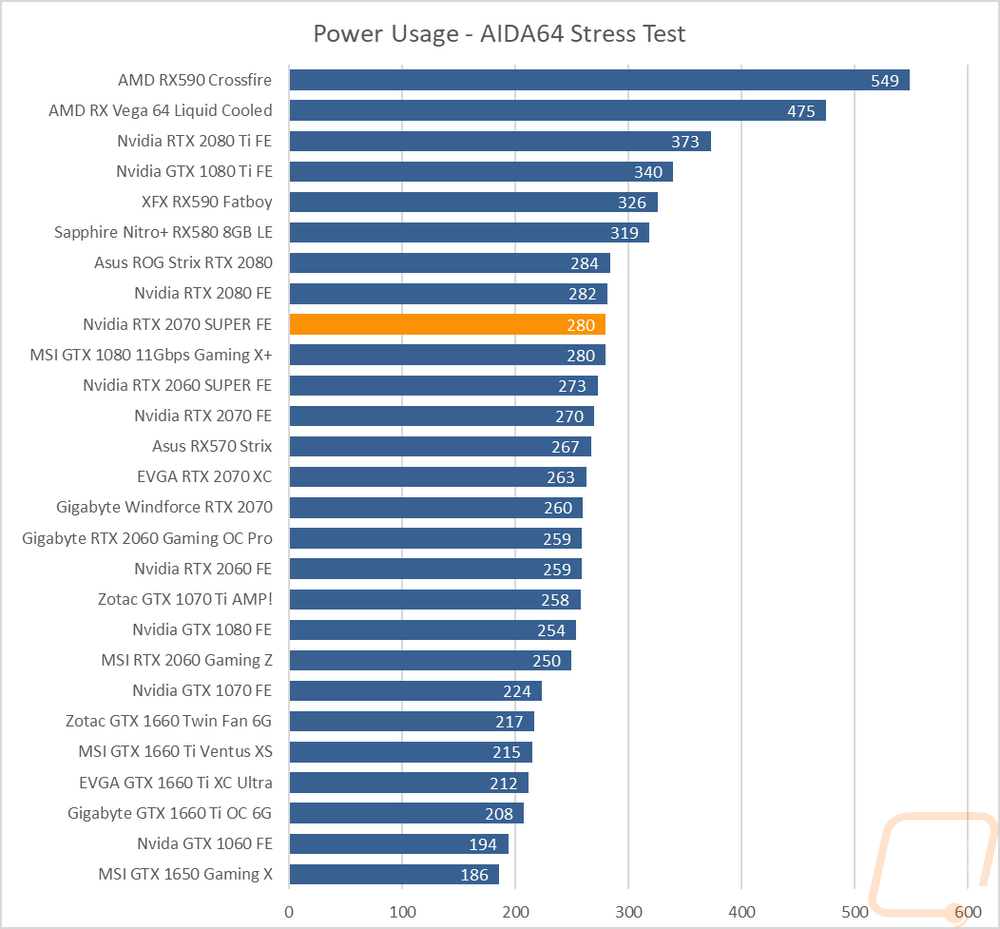 Next, I took a look at fan noise. For this I did three tests, two by hard locking the fan speeds to 50% and 100% and measuring the noise output from 18 inches away. The third I did the same measurement but from when I was doing thermal testing and had the card under a constant load for a half hour with the stock fan profile. That third test gives us a look at what you should expect for noise with the card at its hottest. So for noise the 2070 SUPER was in line with the other RTX cards at 60.1 decibels at 100 percent fan speed. This isn’t a big shock considering they all have the same fans. This is an improvement over the older 1080 Ti which ran its single blower fan at a higher RPM but it is actually louder than the other blower cards and frankly WAY off from what the aftermarket cards do. The 2070 SUPER was even louder than the 2060 SUPER in the stock profile load test which like I mentioned before is really the main number you want to know. Overall this is the one area that the RTX Founders Edition cards are weak in compared to the aftermarket variations. 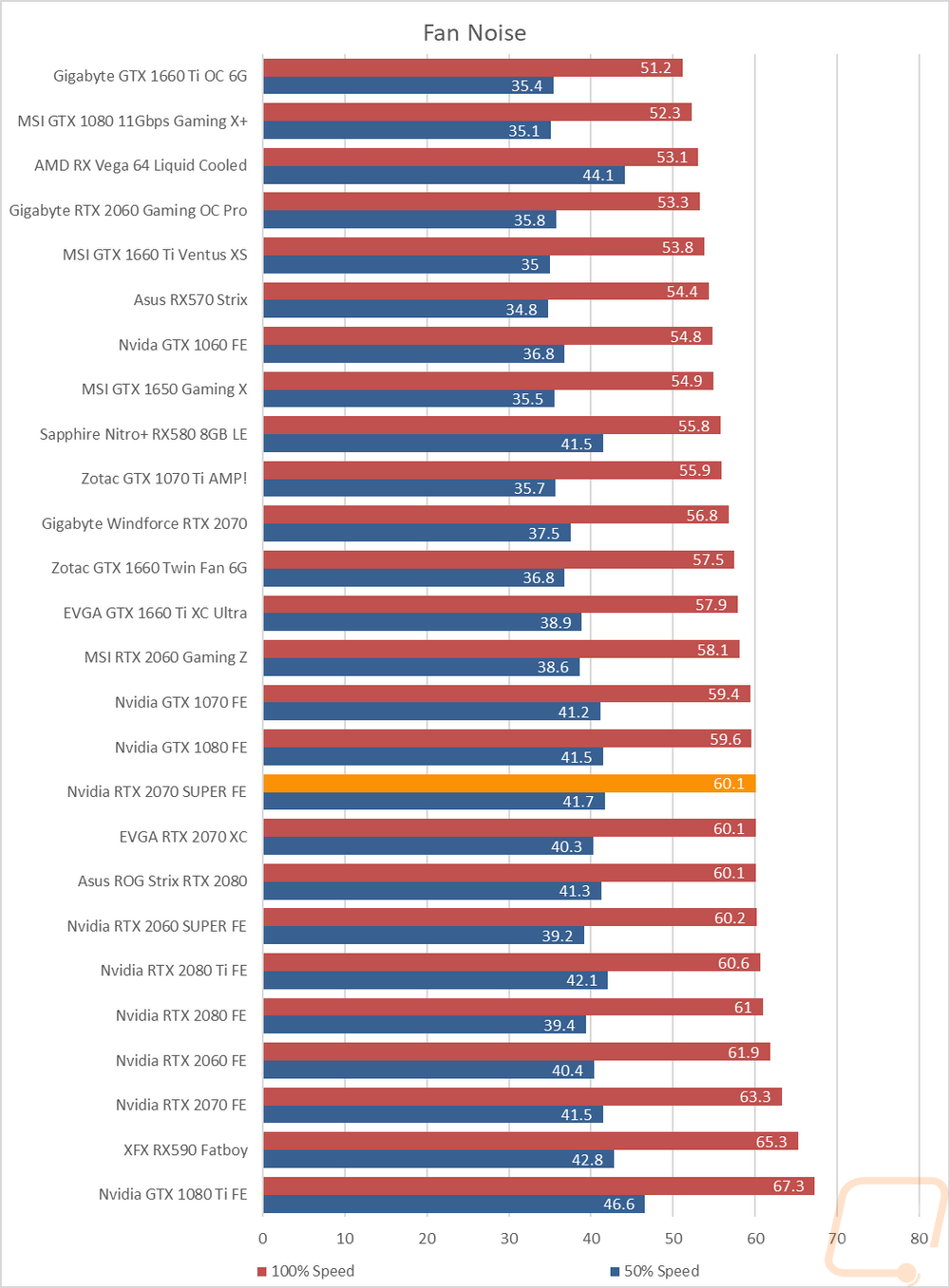 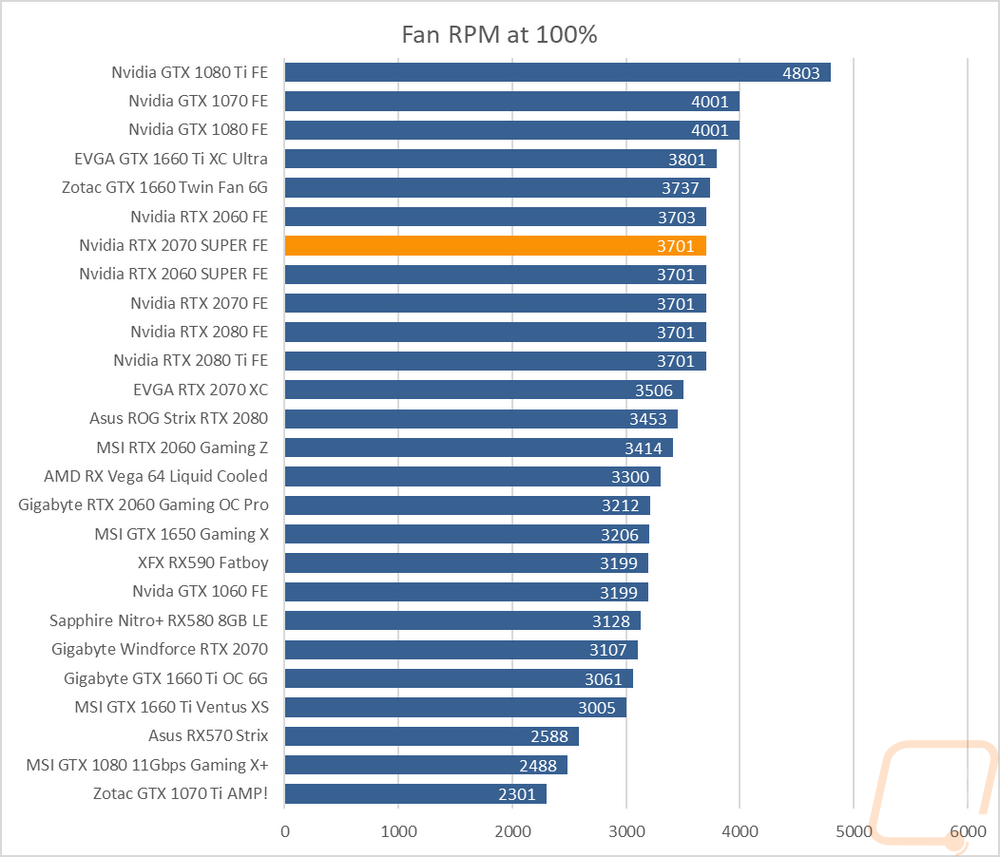 As for temperatures, for these tests, I put the RTX 2070 SUPER under load using AIDA64’s stress test and let it go until the temperature leveled off with a minimum of a 30 minute load time. I did this twice, once with the stock fan profile and then again with the fan turned all the way up. I wanted to see what you should expect out of the box and then what the cooler is capable of. The delta between those two also shows us how much cooling headroom the cooler has. So with the stock profile, the 2070 SUPER reached 62 degrees Celsius. This oddly enough was better than the RTX 2080 and the original RTX 2070 as well. Of course, that model was using a smaller heatsink. With the fan turned up to 100% that dropped down to 48 which was higher than the RTX 2080 showing that the fan profile has potentially changed a little with the new cards. A 14-degree delta between the two isn’t bad though I bet a lot of the aftermarket cards edge out a little better. 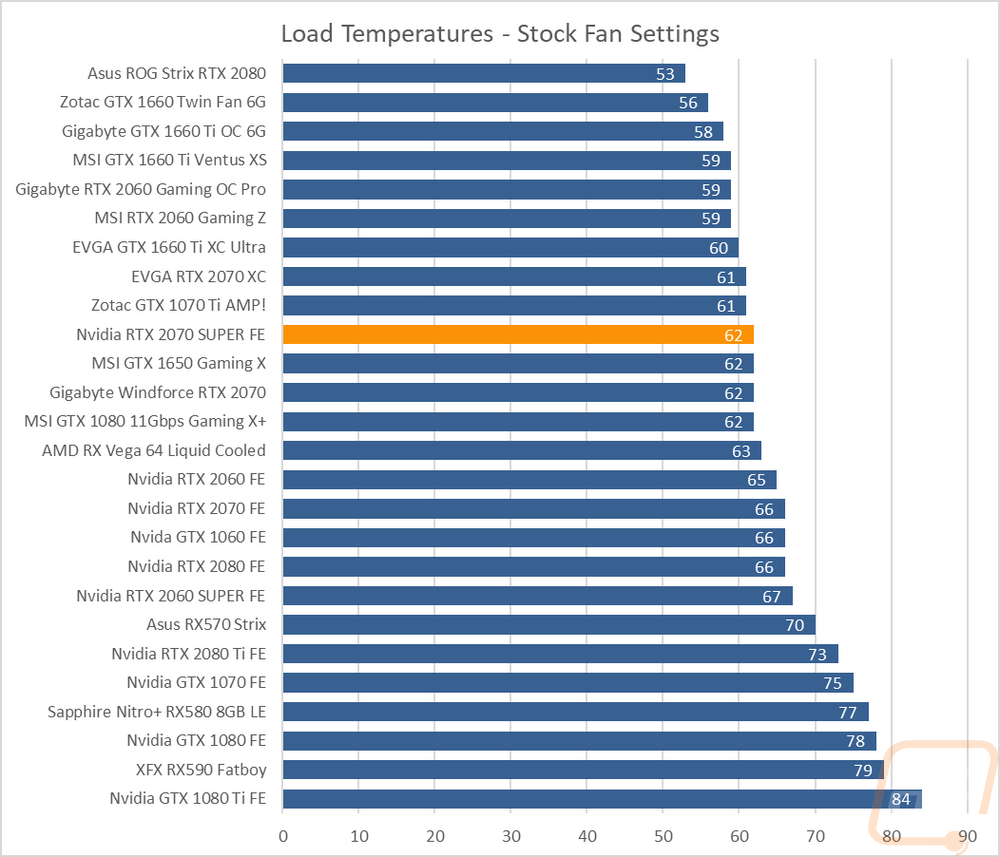 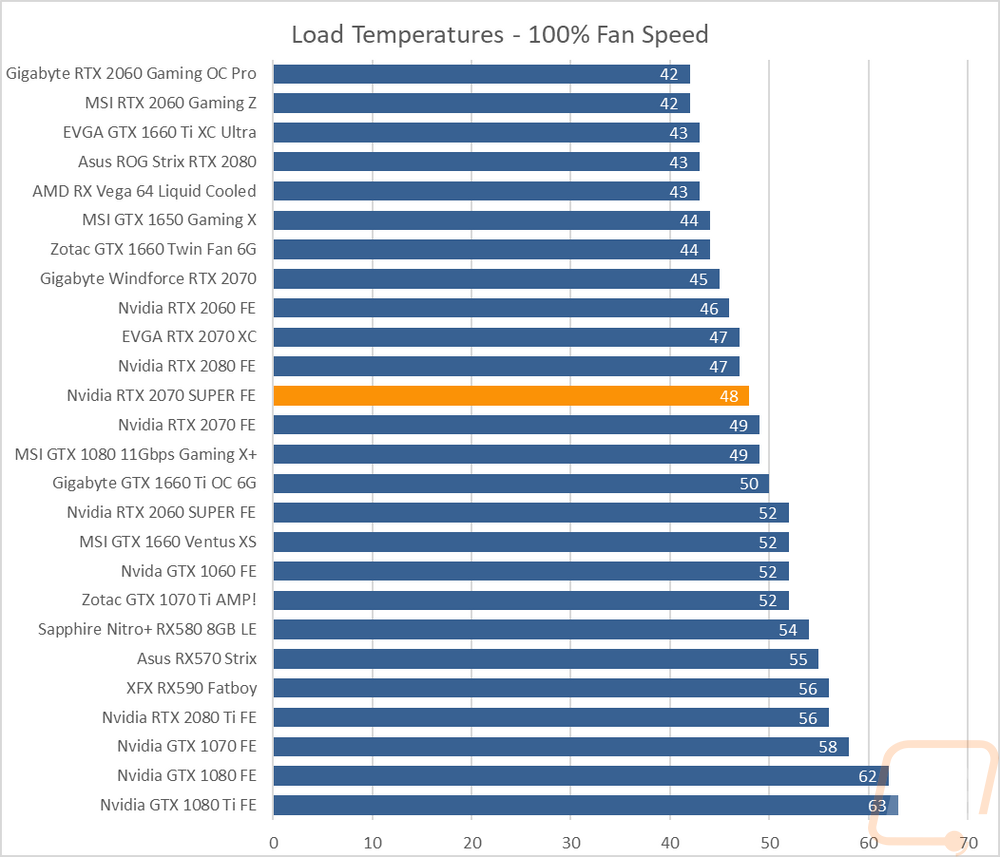 While doing the temperature testing I did also bring out the thermal camera to take a look at the 2070 SUPER after it had been under load for a while. I noticed that it has the same hot and cool spots behind the fans as the RTX 2060 SUPER did. The hotspot on the back of the card is larger and more noticeable as well but you can see the backplate pulling some of that heat out across it. Then the top down look shows the hottest area on the card by far is the center at the top where most of the airflow is coming out. There is also heat going out the bottom heating up that PCI slot, I wouldn’t put one of these Founders Edition cards right above an M.2 slot but it isn’t bad enough to be a concern otherwise. 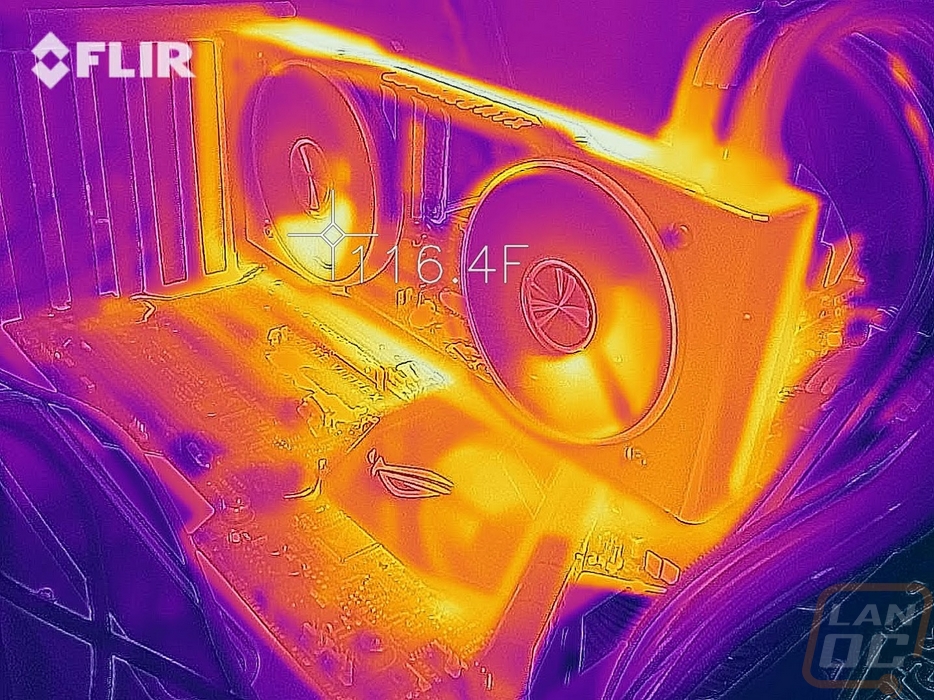 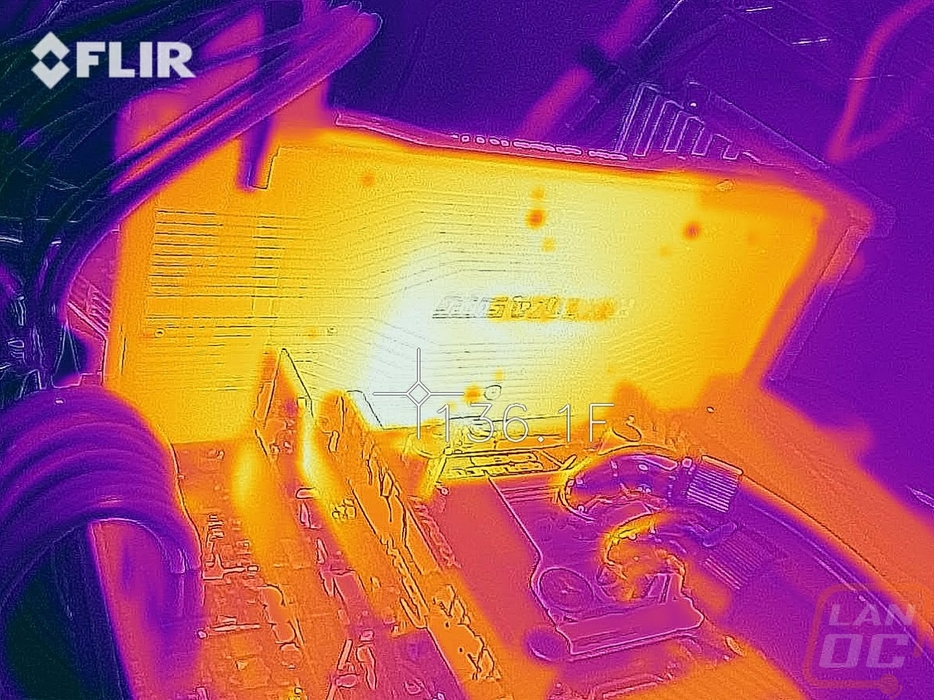 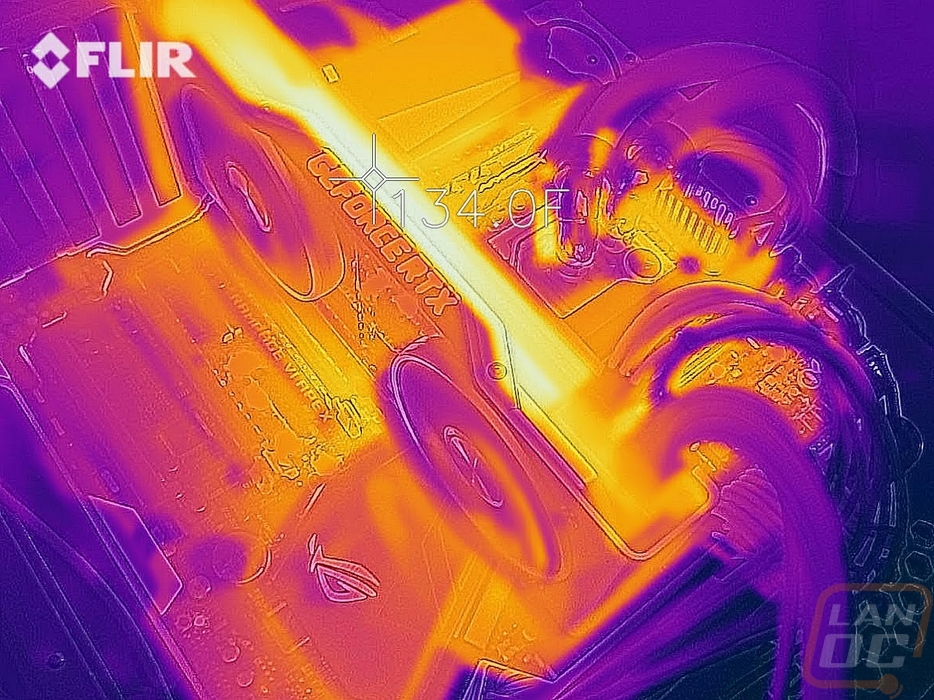 We have 1601 guests and one member online