Nvidia launched their RTX lineup 9 months ago with the RTX 2080 Ti and RTX 2080 and at the time there weren’t really games available to take advantage of the RTX specific features. RTX was one of those chicken or the egg situations where the cards to be able to handle real-time ray tracing needed to be available before any games were going to offer it as an option. Well, this years E3 showed a lot more games with ray tracing support in the pipeline and Nvidia hasn’t slowed down their RTX push, even with their launch of a few GTX cards early this year. In fact, now that they have been working with Turing for a little while now they have been able to pull a little better performance out of their cards. Of course, normally this would be when they launch their Ti cards but that was used last year so today they are introducing a few new cards with the SUPER designation. They have the RTX 2080 SUPER, RTX 2070 SUPER, and the RTX 2060 SUPER. Right now I’m going to take a look at the new RTX 2060 SUPER Founders Edition card to see what makes these new cards SUPER and then put it to the test through our benchmark suite as well.

Normally before diving into testing a new GPU, I would want to dig into the architecture changes and see what is new but the SUPER lineup isn’t an architecture change nor is it a die shrink. But that isn’t to say that nothing has changed. So below I have a specification breakdown and for reference, I’ve included the GTX 1060, the RTX 2060, the new RTX 2060 SUPER, and the RTX 2070. The RTX 2060 and RTX 2060 SUPER are there for a direct comparison of what has changed. The GTX 1060 puts things in perspective for where things used to be and the RTX 2070 is there to see just how close the 2060 SUPER is getting to the old RTX 2070 model.

Now the big change is that Nvidia has added a few more SMs (Streaming Multiprocessors). Each SMs has 64 CUDA cores so by bumping that up from 30 to 34 the 2060 SUPER has 256 more CUDA cores. That also means more RT and Tensor Cores as well which brings the TFLOPS up from 6.5 to  7.2 on both the FP32 and INT32 (which for Turing run independently). This puts the RTX 2060 SUPER suspiciously close to the RTX 2070. They also played with clock speeds, bringing the core clock speed up from 1365 MHz to 1470 MHz but the boost clock is down slightly by 30 MHz. Similar to the RTX 2070 the RTX 2060 SUPER also has jumped from 6GB of VRAM to 8GB of VRAM and the controller went from 192-bit to 256-bit. That memory controller bump might be the most interesting change, the VRAM and memory was a bit of a limitation on the RTX 2060 as I talked about in my original review. 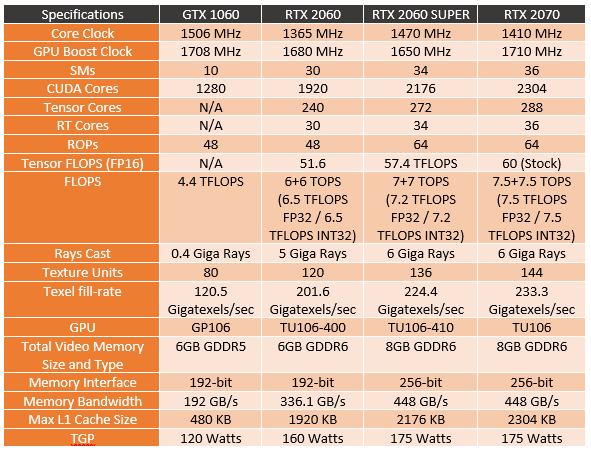 Looking through the specifications you can see how the increase in SMs and memory change things including the L1 Cache jumping in size because those are tied in with each SM. The new memory interface gives you better memory bandwidth as well. Now the changes also mean that Nvidia had to bump up the TGP from 160 Watts to 175 Watts which matches the RTX 2070. It will be interesting to see how that changes power usage in our tests and thermals, but we will have to wait to see that later on. 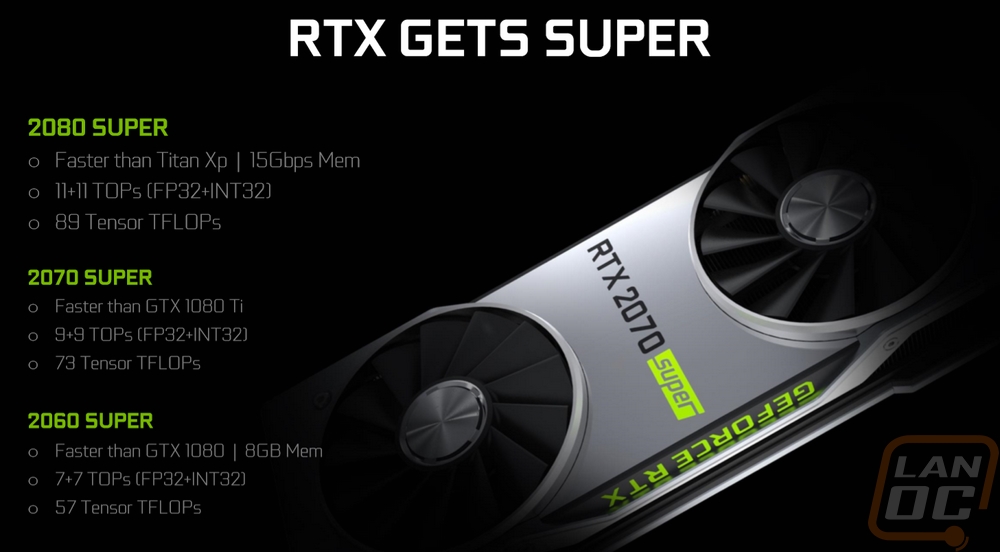 They also focused a lot on all of the big ray tracing games of E3 this year, as I mentioned at the start ray tracing is starting to take off when just 9 months ago at the RTX launch there were only a few demos that had it. Big games like Cyberpunk, Watchdogs, Doom, and Wolfenstein all will have ray tracing. Even more importantly all of the big engines and APIs are getting it as well which should translate to a lot of the smaller titles starting to introduce it as well. 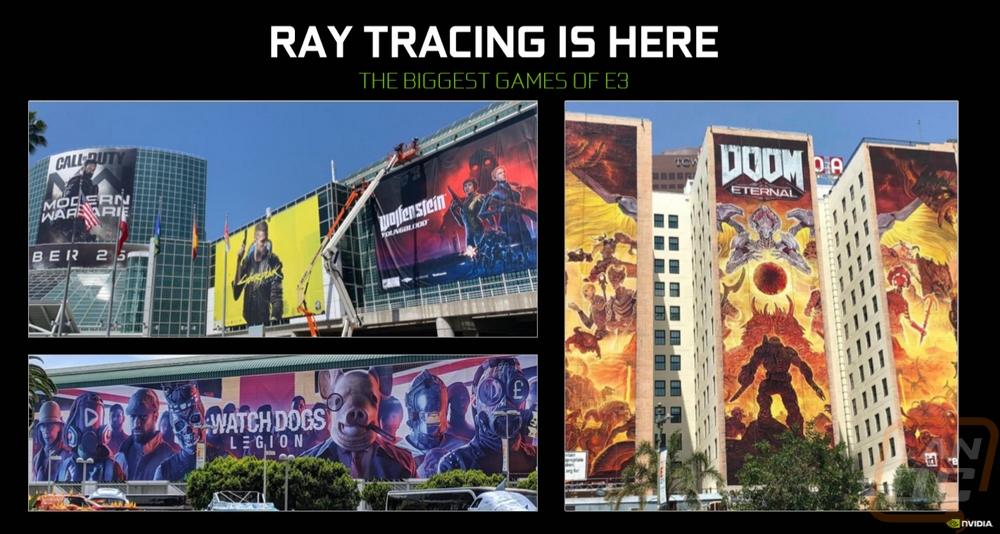 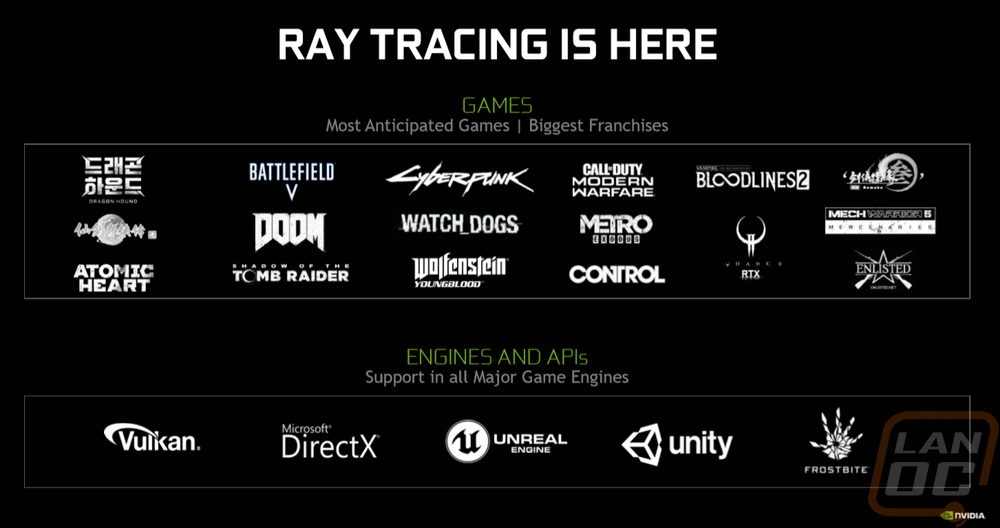 Nvidia’s other big announcement alongside of the SUPER launch is a software introduction for Frame View. Frame View does a few different things. It is similar to FRAPS in that you can run benchmarks to track FPS but it allows looking at the FPS at the rendered FPS which is at the beginning at the pipeline and the displayed FPS which is at the end of the pipeline. You can also check out percentile FPS in a few different variations. You can also check out the video cards power usage with GPU only or TGP power usage. That right now is only supported by Nvidia cards. All of this can be outputted to excel files and also put on an on-screen overlay. The scan files can get really interesting when putting the frame rate information together with the power usage numbers. You can chart performance per watt graphs. I had a bit of a late start on my testing so I haven’t had the chance to play with Frame View too much but it could be very interesting for testing!

Before getting into testing I did also get a screenshot of the GPUz for our RTX 2060 SUPER Founders Edition. This is just to document the BIOS version and driver used for testing and to confirm that the card isn’t running at any higher of a clock speed than the specifications list. 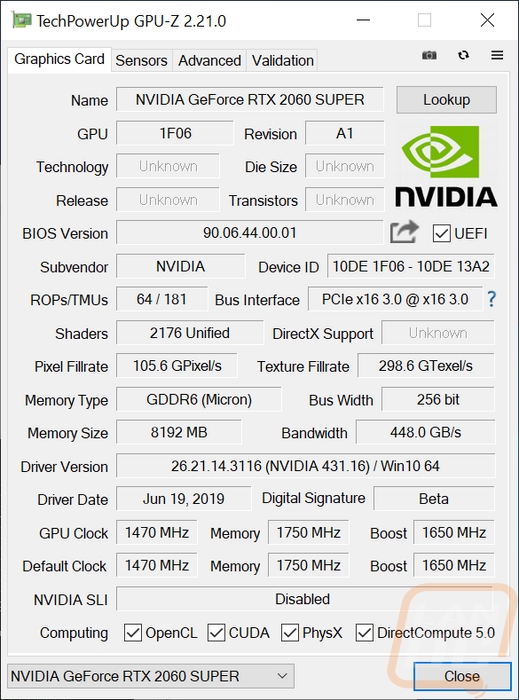 Nvidia also released a hype video for the new SUPER lineup with a SUPER hero feel this morning. You can check that out here as well.