Our new synthetic benchmark test suite is starting to fill in as well now in our 3DMark Fire Strike and Heaven 4.0 results. I did run into a testing issue with 3DMark Fire Strike on the extreme setting that went across multiple HD 7790’s so I haven’t included those results until we can confirm that it isn’t a driver issue, sadly we haven’t heard back from AMD on that though. Our results basically came in on par and sometimes even below the 300 score that we saw with the HD 7750 even. I expected the results to be considerably lower than the GTX 650 Ti Boost because of the smaller Memory Bit size as well as the overall smaller frame buffer size, but even with that in mind the results were too far off to consider keeping them permanently. I would highly recommend keeping an eye out for new driver releases for this card in the future though to fix those issues.

As for our other results, in the standard 3DMark Fire Strike test we had a 4051 graphics score that put our overclocked R7790 in over the reference design of the GTX 650 Ti Boost but below the overclocked MSI card. In our Unreal Heaven 4.0 benchmarks we saw the R7790 come in lower than both of the GTX 650 Ti Boost cards due to our Heaven 4.0 benchmark having the settings including AA turned up. It’s clear that the small frame buffer size can cause major issues for the R7790 in some cases. 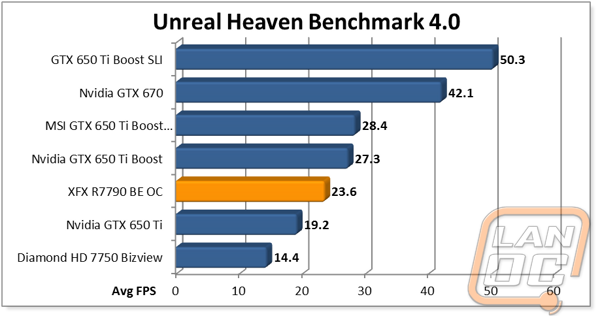 3DMark 11 had similar results to Fire Strike with the R7790 coming in above the reference GTX 650 Ti Boost in the performance test but when the settings are turned up to extreme it pulls behind. In both cases it was just slightly behind the XFX R7850 Black Edition OC as well showing how perfectly the R7790 fits in between the 7770 cards and the 7850 cards.