Along with new game benchmarks we also changed how we handle cooling and noise testing and added power usage testing as well. For cooling testing we switched to the Heaven 4.0 benchmark and we let it run for a half hour under the same “extreme” preset that we do on the Heaven 4.0 benchmark. This will warm the card up in a similar way to what you should expect to see in the average game. Our results are finally starting to fill in with our new benchmarks due to some retesting of old cards in addition to cards like the Diamond BizView that we just covered as well. With two fans I had high hopes for the R7790 but I have had a few issues with some XFX cards getting a little warm. It looks like they have adjusted the fan profiles to fix this and the R7790 performed perfectly with it being a little warmer than the GTX 650 Ti Boost from MSI, but still MUCH better than the reference cards in our test as well.

For noise testing we changed things up as well to a less subjective test using a decibel meter. We hold the meter three inches away from the fan side of the card on an open test bench. Your experience in a closed case should be lower. We do the test at an idle state as well as with the fan turned up to 100%. This is basically a minimum and maximum situation, your in-game noise levels will fall in between depending on how much load the game puts on the card itself. Idle loads are done the same way but out of game in windows at idle. At idle the XFX R7790 Black Edition was the quietest card tested at 60.9 db. With the fan turned up to 100% it didn’t fare as well with it putting out 72 db. It should also be noted that my wife actually came into the office asking what the noise was as well. I wouldn’t recommend cranking the fans all the way up on this one, but of course with the results earlier for cooling we know that you won’t need to turn them all the way up either.

Our new power consumption testing uses the same Heaven 4.0 benchmark to put a load on the card while watching for peak power draw using a Kill-a-watt hooked to our test bench. The total power usage is going to include the power needed to run our motherboard, 3960X CPU, hard drive, SSD, and water cooling on top of the video card itself. I was really curious where the power usage for the R7790 would come out being our first HD 7790 tested. At idle it barely pulled any more wattage than our GTX 650 Ti and the tiny HD 7750 BizView that didn’t even require a 6 pin power connection. For under load wattage it came in just above those same two cards as well with 290 watts being pulled total, 29 watts less than the reference GTX 650 Ti Boost even! 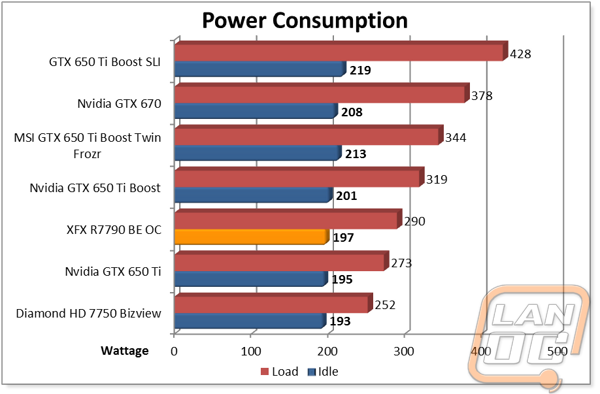