I jumped into the XFX R7790 Black Edition OC review excited to check out a new XFX card as well as excited to take a first look at AMD’s new offering and the competition for the GTX 650 Ti Boost that I have covered multiple times over the past few weeks. Even after all of that excitement wore off I am still excited for these times. Both Nvidia and AMD have jumped back into a more competitive market recently with bundles, deals, and new models being introduced even before we get into new series as well. Because of that this is certainly a decent time to be looking at mid-range cards although I would be a little more worried about picking up a high end card at this point.

I love that AMD spent a little time on the HD 7790 and introduced a new card that isn’t just two cards patched together like Nvidia did. But having said that I think that this card is held back in many cases by its limited frame buffer. In order for AMD to keep up they will have to bring out a 2 Gb card to compete better with the GTX 650 Ti Boost 2Gb. Another issue that I ran into while testing this card was its driver issues. Unlike most other launches, the HD 7790 has a driver that isn’t currently bundled into the normal AMD drivers. That means you have to search around to even find the proper driver after downloading the normal driver and having no luck. There isn’t any documentation available saying that you need a different driver unless you actually Google “HD 7790 driver”. On top of that we ran into issues with the driver in 3DMark Fire Strike Extreme that forced us to not even be able to include those results in our graphs.

Performance wise the R7790 did well in all of our benchmarks. I was especially impressed with its results in the power and cooling section. For an overclocked card with two fans they still managed to keep the power draw down. This will help make this a good card for people who don’t have a lot of extra power on their power supply in small OEM or store bought computers. At the end of the day I think the decision between the GTX 650 Ti Boost and the HD 7790 is going to come down to how much ram do you need and brand preference. The performance numbers jump back and forth with each winning a few and I don’t think you can go wrong with either one, especially once they update the drivers. 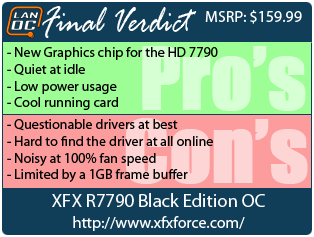 You might call him obsessed or just a hardcore geek. Wes's obsession with gaming hardware and gadgets isn't anything new, he could be found taking things apart even as a child. When not poking around in PC's he can be found playing League of Legends, Awesomenauts, or Civilization 5 or watching a wide variety of TV shows and Movies. A car guy at heart, the same things that draw him into tweaking cars apply when building good looking fast computers. If you are interested in writing for Wes here at LanOC you can reach out to him directly using our contact form.
Discuss this article
Log in to comment
Posts in discussion: XFX R7790 Black Edition OC