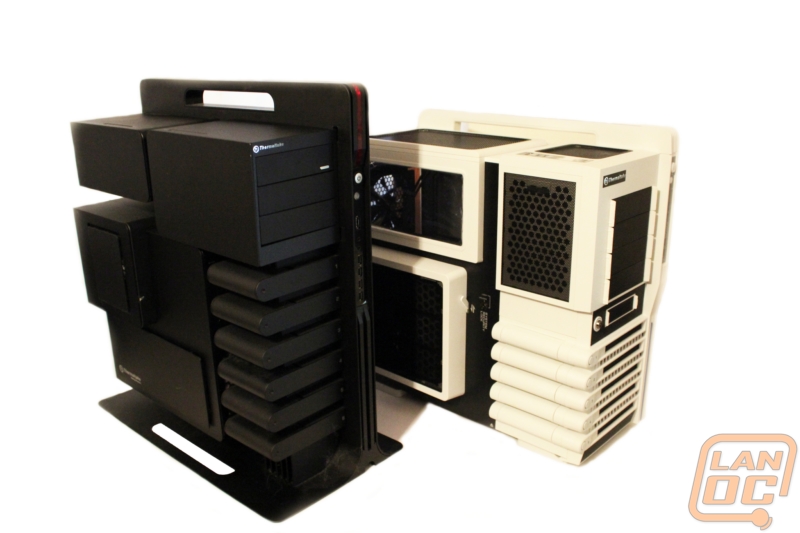 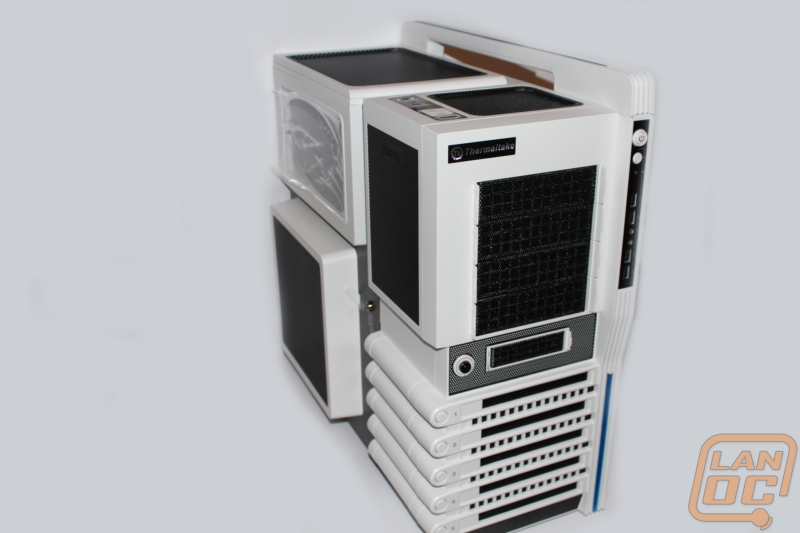 Starting up top, the Level 10 GT has a large handle on the right side that is made of plastic but supported properly to be able to use as a lifting point. Rather than the red strip, the snow edition sports a blue LED strip on the handle. Most of the rest of the top of the case is ventilated for good air flow; each vent is painted black to contrast the white color of the case. Near the front of the top you also have part of the I/O panel with an eSATA port and two USB 3.0 ports. Along with them you also have three buttons that control the cases fan speed and the fan LED lighting. 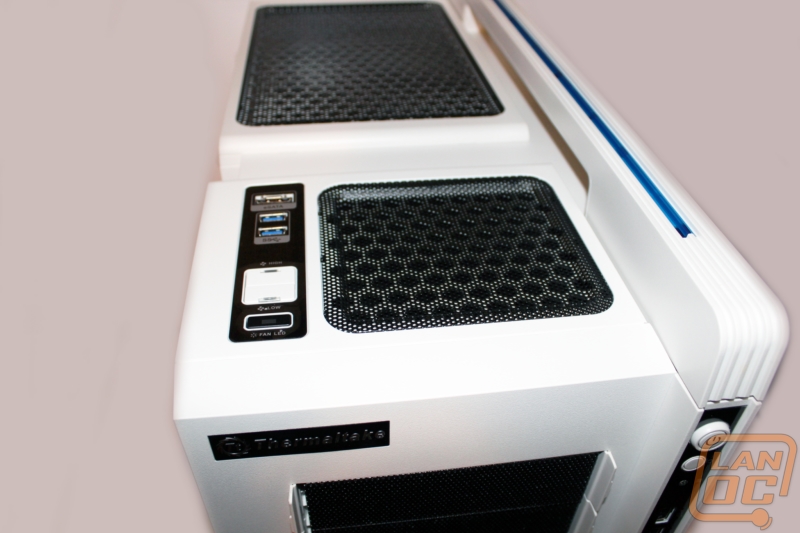 The front of the Level 10 GT Snow Edition has the same tower that wraps around to the top handle with more blue LED lighting. The bottom half has 5 hard drive bays with each sporting small black ventilation on the side, an improvement over the original Level 10’s hard drive bag design that had no ventilation. Each hard drive has a button on the side that when pushed (and unlocked) will allow the drive to be removed. You have four 5 ¼ drive bays with mesh and one 3 1/2. Each drive bay is easy to remove using the tabs on each side that stick out. You will also notice the lock next to the 3 ½ bay, this is used to lock or unlock the hard drives to keep someone from running off with them. The front is also where you will find the other half of the front I/O panel with four more USB 2.0 ports, headphone and microphone ports, a hard drive activity light, and power and reset buttons. 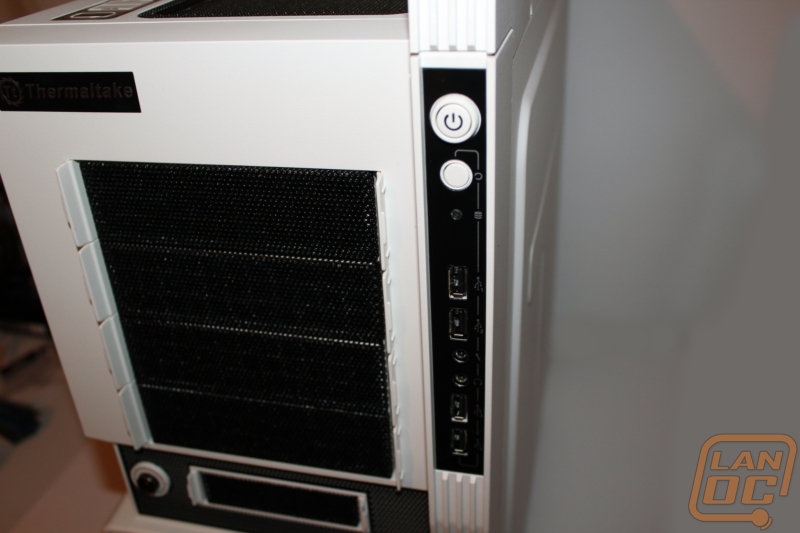 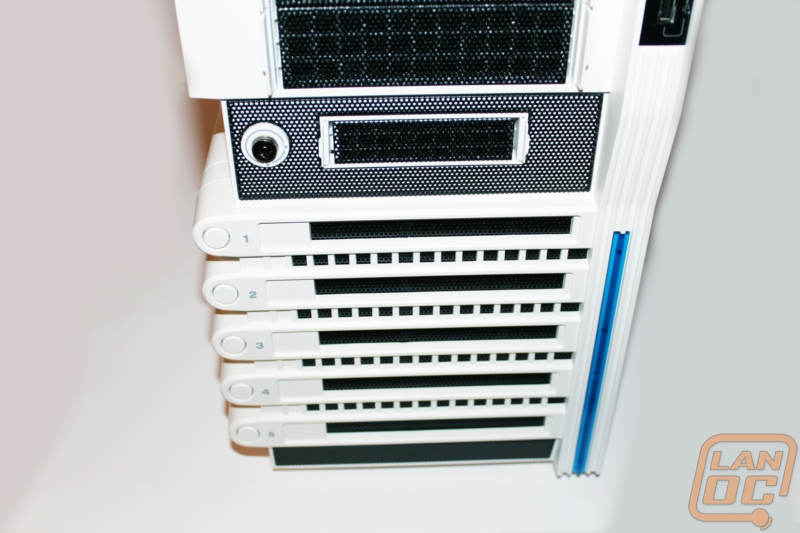 The right side panel is simple with a few designed formed into it, I like how these designs allow for even more room behind the motherboard tray for wire management. In the bottom right corner there is a nice Level 10 GT Driving Inspiration logo painted on also. On this side I was also able to see a slight color difference between the painted side panel and the plastic. This is fairly normal for white cases, but the perfectionist may be bothered by it. 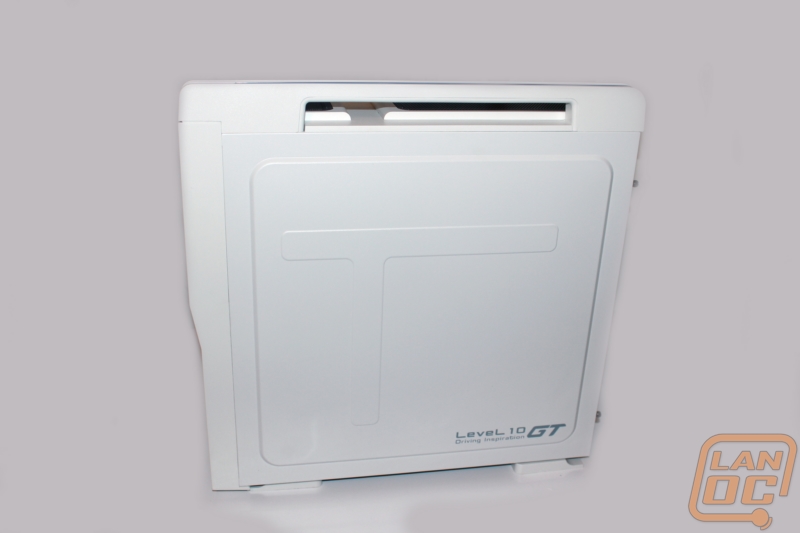 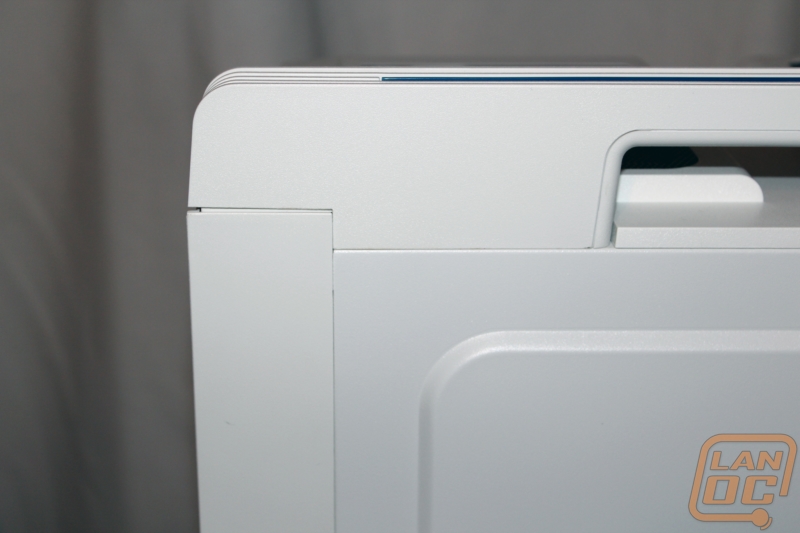 The left side panel is where most of the action is going on with both a window to the inside to see your motherboard and two large black vents. This is also where you pull the hard drives out at. With the drives unlocked and with the button on the front pushed you can put your hand under the drive through the spring loaded slot and pull each of them out individually. 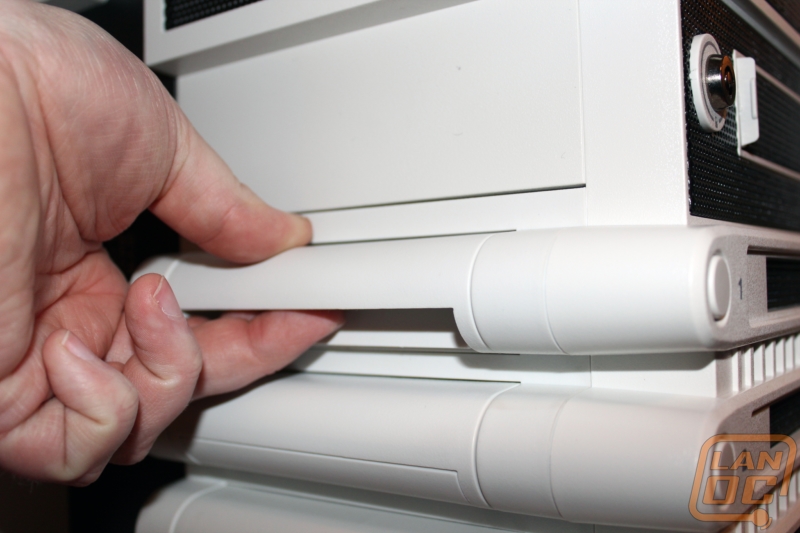 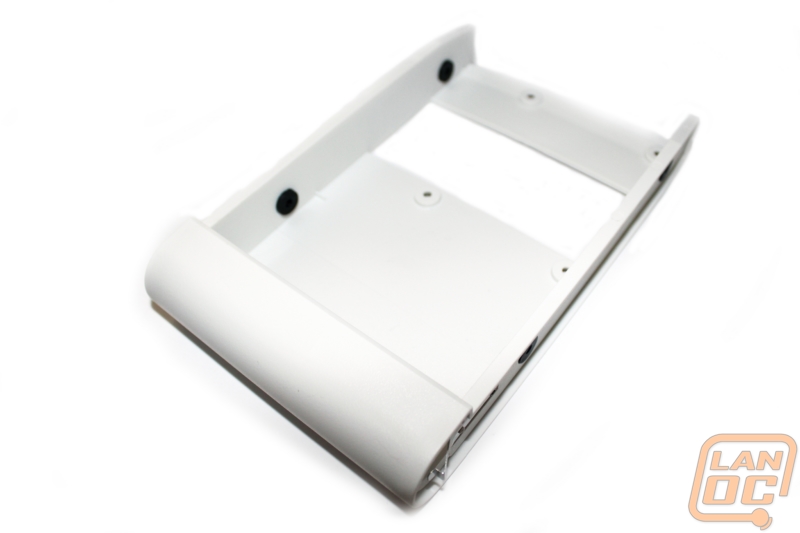 Another feature on the left side is the small lever next to the main vent. This lever controls the air flow coming in from that same vent to point it up or down or close it.  Next to that lever is the side panel lock. With this locked you can’t open the side panel at all preventing anything from being taken at a LAN or event. 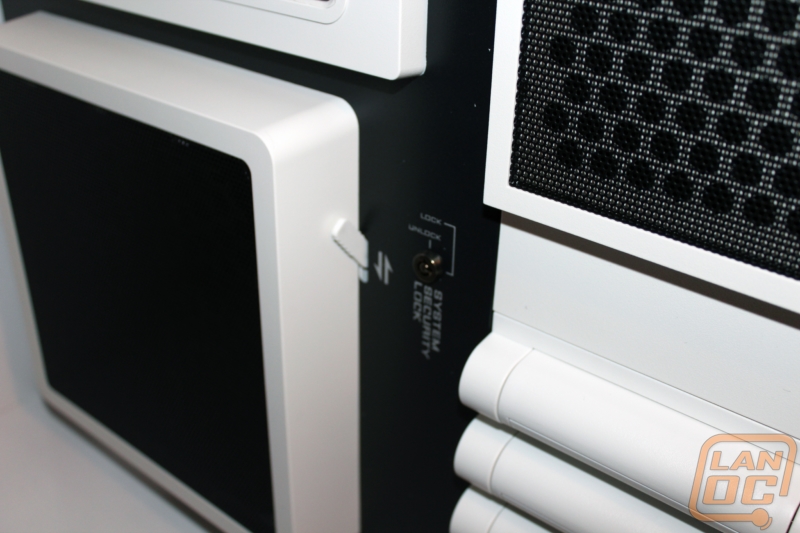 Around back the back panel is completely black. Up top, you will notice a small hoop up top and on the bottom; Thermaltake has included a small hoop to lock your cables down at a lan party to prevent anyone from walking off with your keyboard or mouse. Next to the top hoop are three water cooling grommets, an odd number for sure but I think this comes from this case being designed before internal USB 3.0 connections being released. You have one 140mm fan on the rear just above the rear I/O panel.  For PCI slots you have a total of 8 meaning support for extended ATX motherboards but no support for XL-ATX boards. On the right side of the rear panel there looks to be a large floppy disk drive, in reality it’s the filter for the side panel vent. 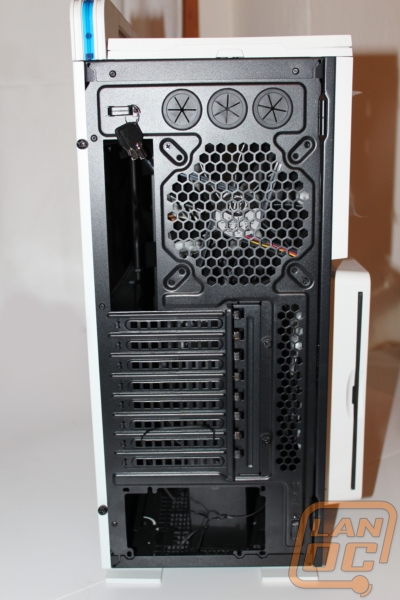 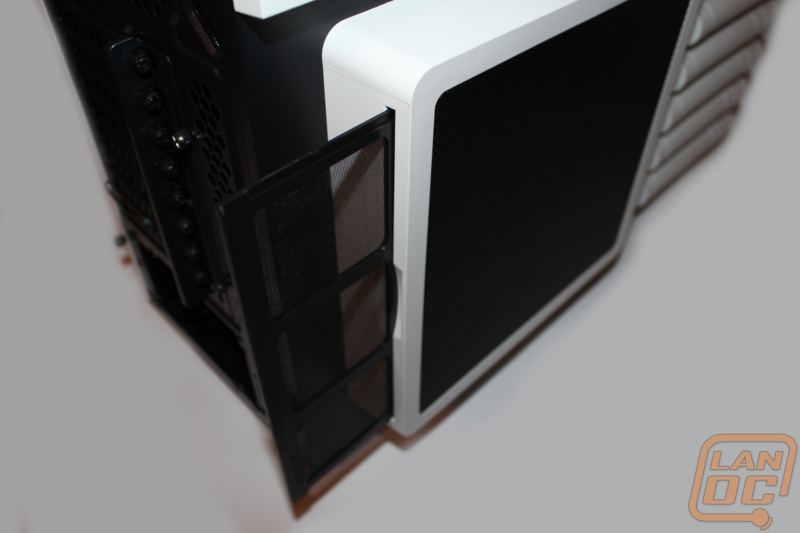 Finally to the last area, the bottom of the Level 10 GT. You have four large feet and a long filter that covers the bottom vent on the case. The white button on the bottom of the case is the button that opens the side door when it’s unlocked. It almost feels like you are opening up the door on a car with shaved door handles when you have to reach under the case to open the door up. 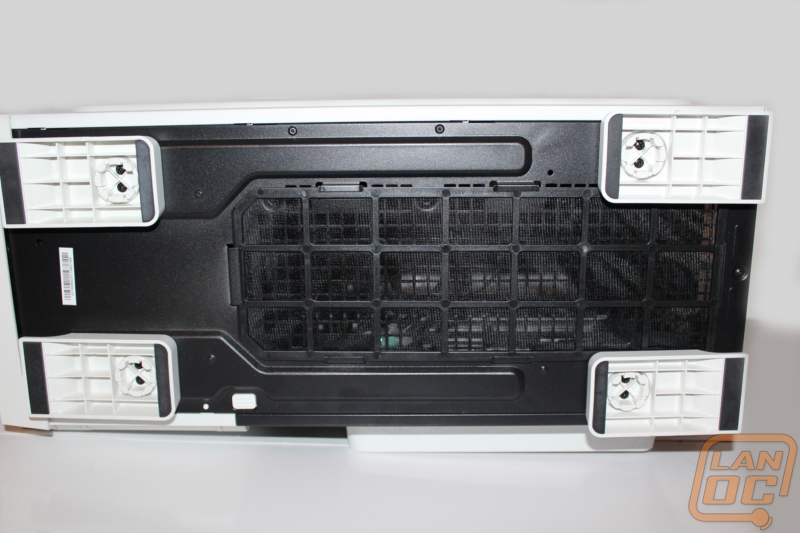 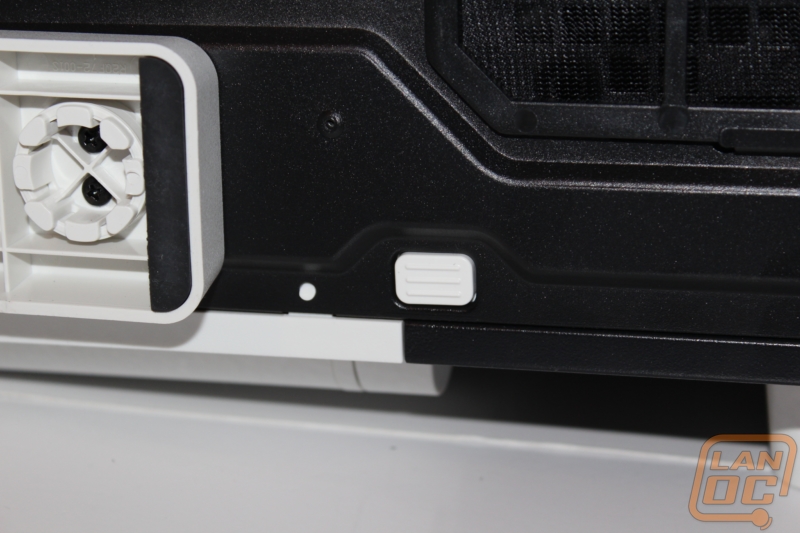