Like a lot of other new cards that come out that aren’t at the top end of the product stack, the new Radeon RX 6600 has a lot of comparisons when it comes to performance with the last generation RX 5700. Where the RX 6600 sets itself apart however is when we get into the power usage as it does manage to use less power than the RX 5700. That also means that the card isn’t fighting the heat like those original reference cards were as well. Even with the PowerColor RX 6600 Fighter design which is a lot smaller than a lot of other cards on the market and it is a true 2 slot card and doesn’t go up over the standard PCI card height, its cooling performance is much better than those 5700 reference cards. I do think however that there is still a lot of room left on the table as far as cooling goes. The heatsink itself is thin once you take away the space for the fans and with it not being form-fitting around the components on the board. I also feel like the heatsink would benefit from a different heatpipe layout that doesn’t add more heat to the side of the card that is also dealing with the VRMs. The PowerColor RX 6600 Fighter ends up having a hot side and cool side to the card.

All of that said, I like where the PowerColor RX 6600 Fighter is performance-wise. In most tests, it falls right above the older RTX 2060 and under the newer RTX 3060. When it comes to 1080p performance which is the focus for the RX 6600, that is the sweet spot. It will handle anything you throw at it at 1080p, even with the latest titles at their highest settings, and it's going to get you at 60 FPS or well above in some situations. The issues I had with the cooling design mean that it isn’t the coolest card out there, but it also isn’t running hot and being a reference clocked budget-focused card that is about what you should expect. I also like the simple blacked-out design that has no lighting, very little branding, and no over the top styling. I do wish it had an even basic backplate, just because that is the most visible part of the card and also because ours has the bright yellow quality control sticker right on the back as well.

Now when it comes to pricing, the market is completely out of control still frankly. The RX 6600 has a suggested price of $329 which is the same price as the RTX 3060 launched at. If the market wasn’t completely jacked up, I would say that is a little high given that the 3060 is a faster card. But right now, I’m more concerned that most buyers won’t be able to find the 6600 even at that price. Compared to the prices things are going right now, that price isn’t too bad and while we won’t know for sure until cards go up for sale today (I’m writing this before the launch obviously) but I’m expecting that the PowerColor RX 6600 Fighter be PowerColor’s $329 card given its basic design and reference clock speeds. If you are aiming to game at 1080p and get the chance to get a card. This wouldn’t be a bad pick up. 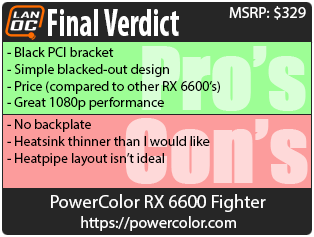 You might call him obsessed or just a hardcore geek. Wes's obsession with gaming hardware and gadgets isn't anything new, he could be found taking things apart even as a child. When not poking around in PC's he can be found playing League of Legends, Awesomenauts, or Civilization 5 or watching a wide variety of TV shows and Movies. A car guy at heart, the same things that draw him into tweaking cars apply when building good looking fast computers. If you are interested in writing for Wes here at LanOC you can reach out to him directly using our contact form.
Discuss this article
Log in to comment
Posts in discussion: PowerColor RX 6600 Fighter