Two months ago for the AMD Radeon RX 6600 XT launch, we saw the latest mid-range card outperforming high-end cards like the 1080 Ti from a few generations back. The steam survey has 67% of users currently gaming at 1080p and for a lot of them even the RX 6600 XT is more than they need, AMD is launching today the RX 6600 which might fit the bill. It is focused on 1080p performance and runs on the same Navi 23 GPU that the 6600  XT has, with a few things cut back.  Today I’m going to check out how the PowerColor RX 6600 Fighter that AMD sent over-performs as well as check out what PowerColor has to offer on their reference clocked option as far as cooling and noise performance goes.

Before diving into the testing, I do like to double-check with GPUz to make sure that our card is running at the clock speeds that it should be at and the PowerColor RX 6600 Fighter is running at 2044 MHz with a boost clock of 2491 MHz which fits the AMD reference clocks perfectly. I also include this so our firmware revision is documented and as well as the driver tested with which is the Adrenalin 21.30.17.06 that was provided to press for launch. 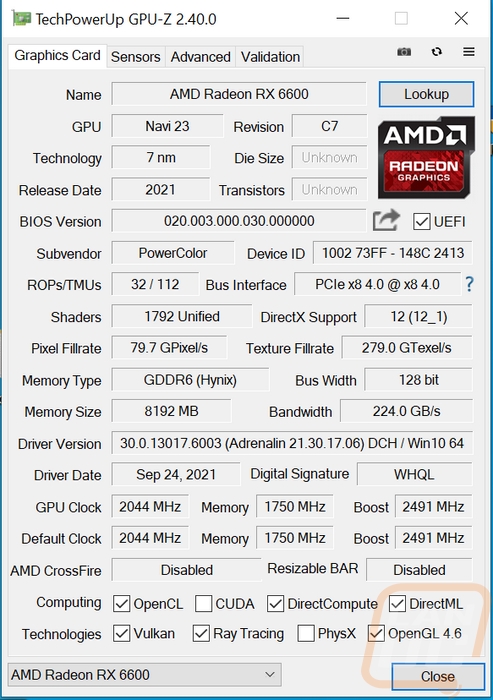