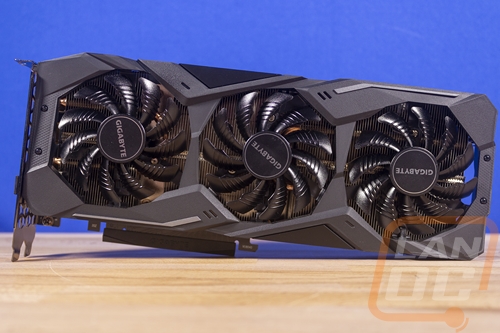 The Gigabyte Windforce cards, in general, have stuck with a similar look for a few years now with the exception of a little more styling built into the fan shroud. A lot of that has to do with Gigabyte sticking with their three fan design on higher end cards where most other cards have moved to two fan designs with much larger fans. I used to look at the triple fan design as the potential for even more noise, but now with everyone else moving to the dual fan design that creates very tall video cards, I’m really liking Gigabytes direction. This design is noticeably shorter than a lot of the cards I’ve taken a look at recently. It is also lighter weight, even with it being a long card. I mentioned it in the packaging section but one of Gigabytes features with their triple fan design is using fans that spin two different directions. You can see the outside fans have the same fan blade design where the inside fan is curved the other way. That fan spins clockwise where the other two spin counter clockwise. The goal with that design is to cut down on turbulence in the area between the fans. While all of the fans mostly push air down, there is some that goes outward, with this design the area between the middle and right fan has both fans pushing air down and between the left and middle fans pushing air up. You can see this because the curves in the fans point down and up respectively. 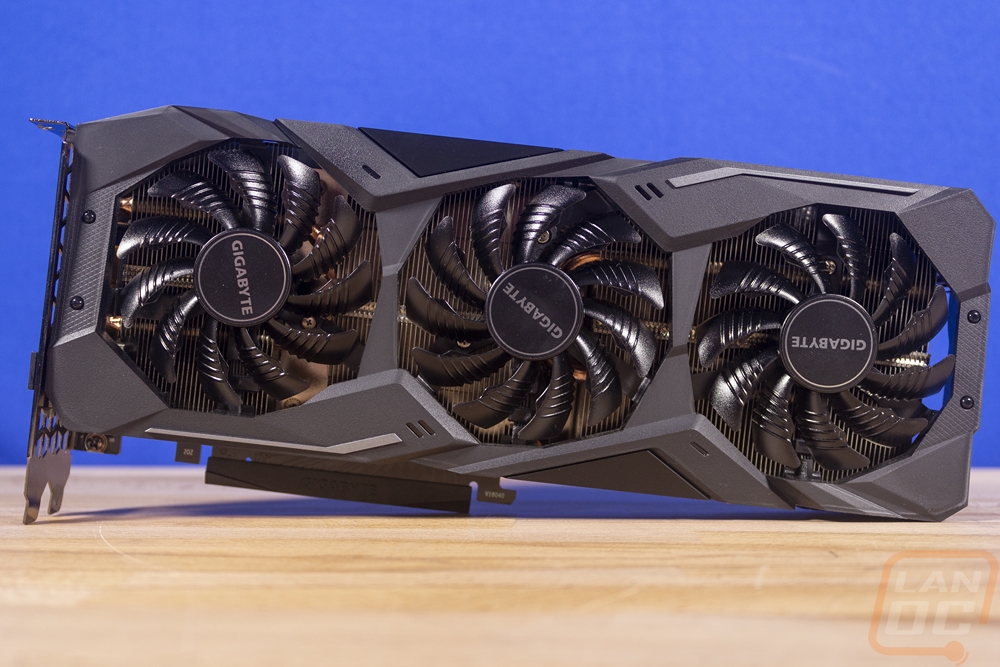 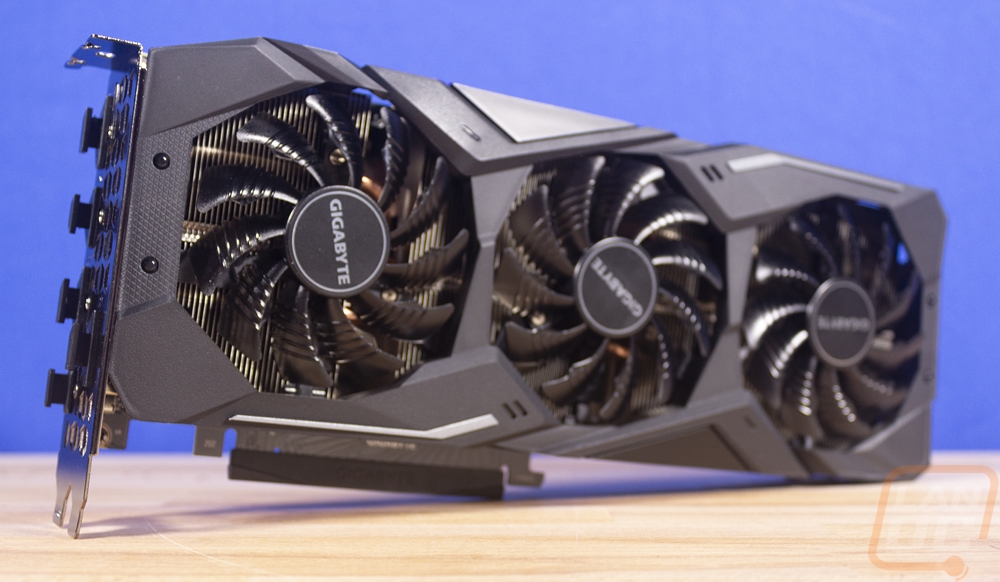 So the power connection configuration here was actually a surprise for me. The Founders Edition card officially comes with a higher clock speed and a higher TDP to go with that and it only has the one 8-pin power connection. Gigabyte, on the other hand, went with an 8-pin and a 6-pin combo. You can see that they also flipped the connections around with the clip on the PCB side and notched the PCB to fit them. This allows the heatsink to be larger and up closer to the power connection but from the looks of it, Gigabyte didn’t really take advantage of that space. There is also a big gap to the right where there is a header, it isn’t labeled but looks just like the other header nearby that is used for the RGB logo, I don’t know why they would have that on here unless they were using this same PCB design on a different board as well. If I had to guess, the Aorus model with the RGB lighting in the fans as well, but I can’t currently find any pictures that can confirm that at this time. 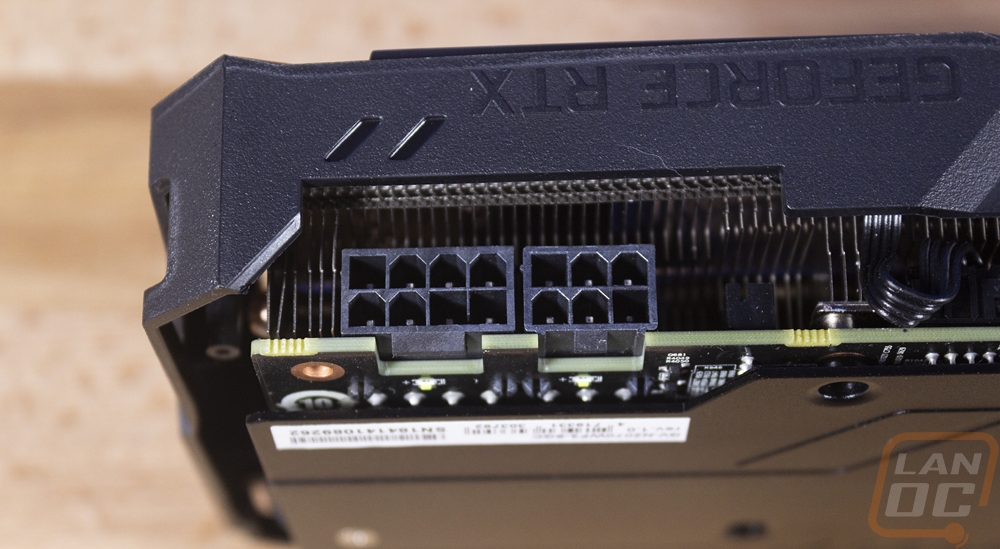 So in addition to not being a tall card Gigabyte also was careful to fit the Windforce RTX 2070 into a normal 2 slot form factor, not the 2.5 slot design a lot of cards are moving too. The top, bottom, and edge view of the card tells us a lot more about the cooling design as well. For starters, there aren’t any heatpipes visible on the top or bottom but they can be seen on the ends. That is because they run horizontally where most other cards go up, adding to the height. They are direct touch so they are right on top of the GPU and then they pull the heat out to both ends of the cards. Each of the three fans has a heatsink design directly under it that is attached to the heatpipes. The fans blow down over the heatsink and into the PCB, then the fan shroud is open around the edge on all sides to allow the heat to go out the top, bottom, and end. The overall shroud design is blacked out with no crazy colors that aren’t going to go with some builds and on the top edge, you have the Gigabyte logo backlit with controllable RGB lighting and the GeForce RTX logo embossed out of the shroud but otherwise hidden.

The PCI bracket end of the card does have ventilation as well and some air will vent out this way but because the other directions will have less restriction it won’t be as much. The display connection options aren’t any different than the Founders Edition. You get three DisplayPort connections and one HDMI. Then in the bottom right corner, they slipped in the new USB Type-C connection that is designed specifically for VR headset usage. It does power, USB, and the display connection in a universal format that should allow VR headsets to be connected right to the video card in the future without ¾ other connections.

The back of the RTX 2070 Windforce has a full-length backplate as well. It is a sheet metal design so it is thinner than what the Founders Edition comes with but it is also black to match the rest of the card. In the middle, the Gigabyte logo is in bright white and facing out the correct direction for traditional case designs. There is a little bit of styling, but not too much, just like the fan shroud.

So unlike the Aorus RTX 2070, there aren’t fancy RGB fans or any of that. The Gigabyte logo is all you get, but unlike the Founders Edition card you can actually change the color of this one 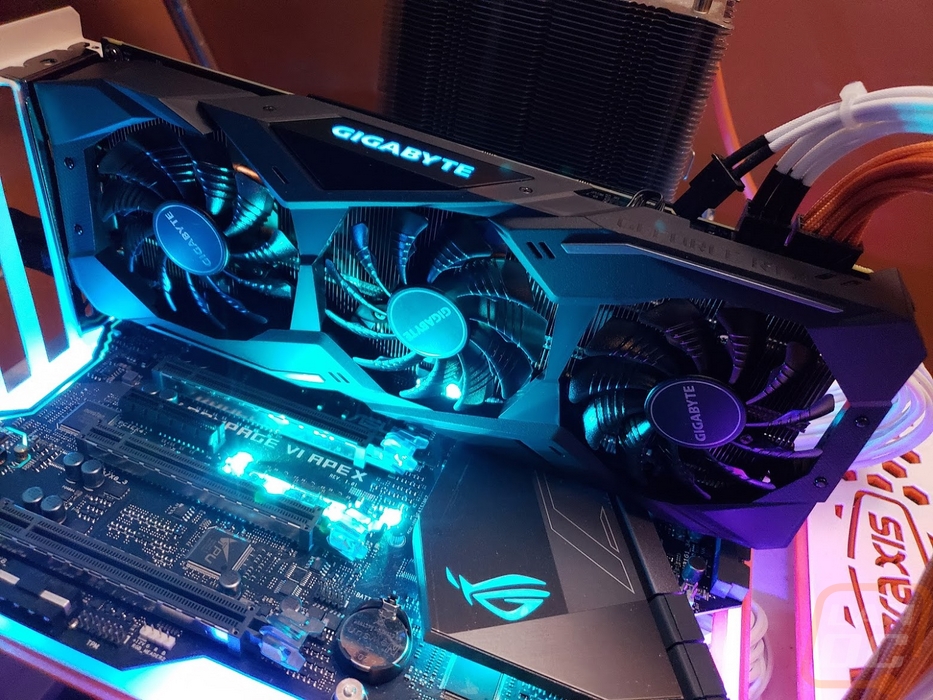 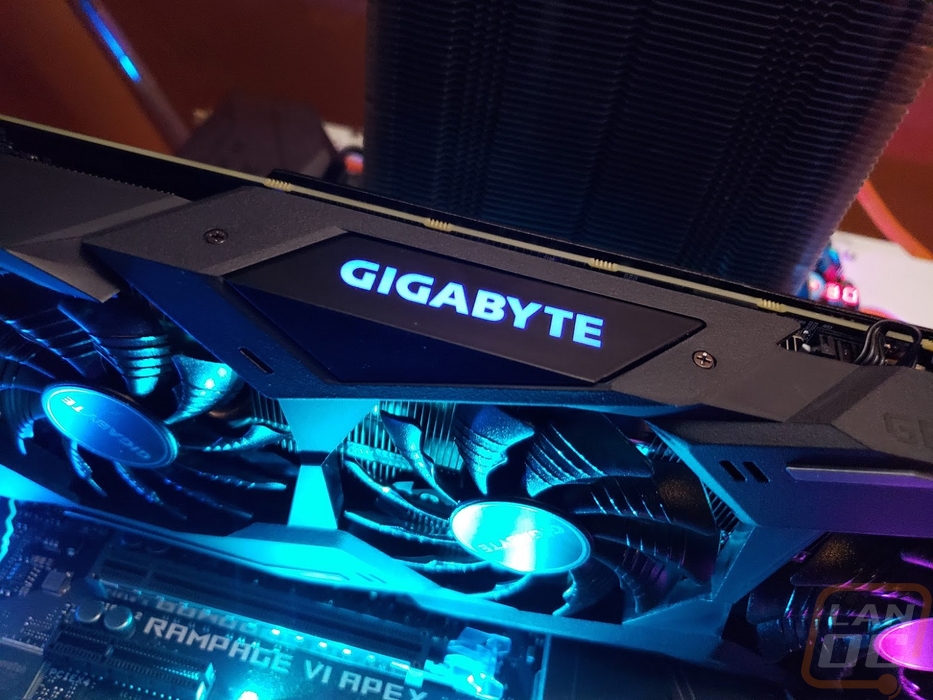