For my last batch of testing, I like to take a look at all the other factors you have to keep in mind when picking out a video card. These also just happen to be the main things that will show a big difference between cards with the same GPU and similar overclocks. I look at the cooling performance of the cards cooler, the overall noise output, and the power draw. Starting with power usage, I ran the GTX 1060 AMP! Edition through Valley Benchmark with our test bench hooked to a Kill-a-Watt. The numbers below are total wattage for our test bench, not the numbers for just the card but they still let us compare from card to card. The GTX 1060 Founders Edition was extremely power efficient and the AMP! Edition is as well, but the card does pull 13 watts more to help power the slight overclock that Zotac gave it. This is still well below the RX 480 that it competes with and even the RX 470’s that I tested, so I’m not going to complain about a small bump in wattage. 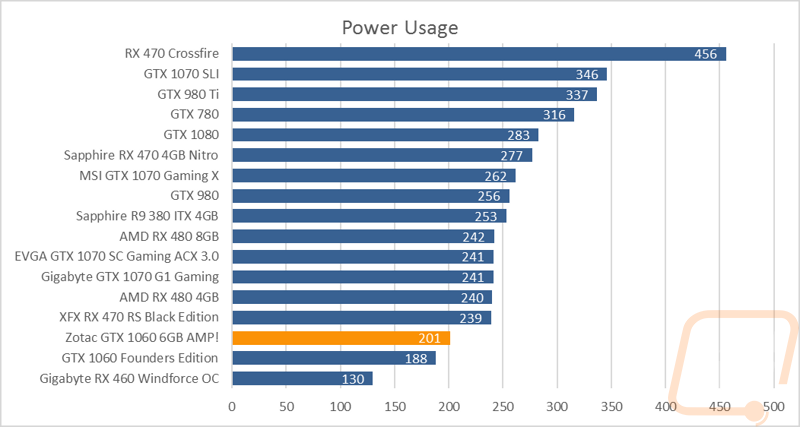 Next, I did noise testing. This testing is done on our open air test bench with a decibel meter mounted 6 inches away from the intake fans. So this is not a perfect representation of what you will experience with the card in a case but being close to the card gives us a better chance to compare the differences between the cards. The AMP! Edition with its two moderately large fans did make a little more noise with the fans cranked up than I expected. When I turned the fans back down to a normal speed things got much quieter. 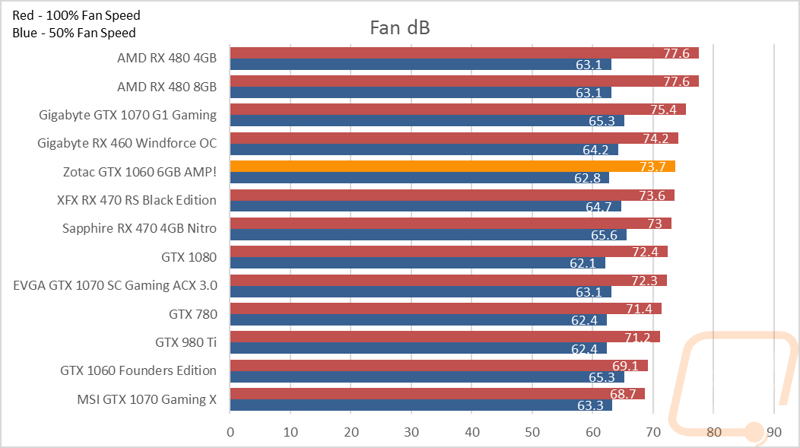 My last tests were focused on overall cooling performance. Here I loop Valley Benchmark to let the card warm up and then document the highest temperature reached. I do this twice, once with the fans set to stock settings and again with the fans at 100% fan speed. This shows me what to expect from the card in normal use and gives us a peek at the fan profile and the 100% fan speed test shows raw cooling power of the card. Considering how cool the Founders Edition ran I was a little surprised to see the Zotac card running in the middle of the pack. In fact, I would consider 74 degrees to be warm for a card with an aftermarket cooler. 100% fan speed testing showed however that the cooler is actually capable of cooling much better. An improved fan curve would most likely go a long way to help the Zotac run much cooler.