In the past, like I said earlier, when I think of Zotac think about orange, especially with their past cards. This time around though they went a completely different direction with a full black and silver look. As someone who loves orange, I’m a little sad to not see it, but black and silver are colors that will go in just about any build. Most of the shroud is silver with the black up the middle helping blend in the fans. Both fans also have silver on their centers as well as the Zotac logo on each. The overall card is considerably shorter than the Founders Edition GTX 1060 that I originally covered but it’s a little short of the normal ITX form factor. ITX video cards typically come in a touch over 6 and a half inches long to match the length of Mini-TIX motherboards so at 8.2 inches long the AMP! Edition doesn’t really fit into that form factor, but it is close. In fact, the PCB fits the form factor but the cooler hangs over a little to be able to fit dual fans. 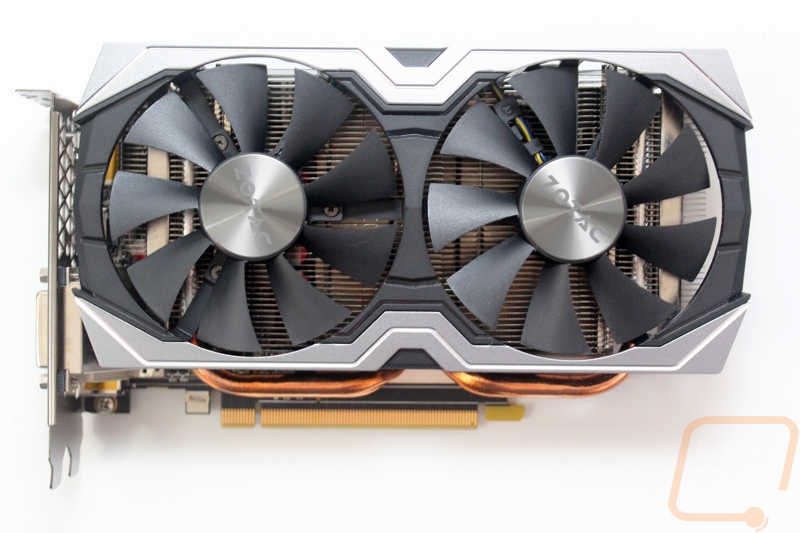 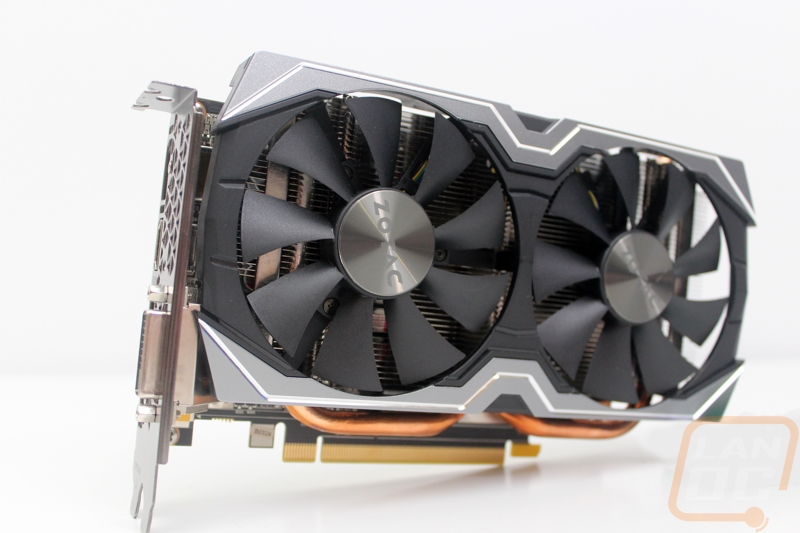 As with most aftermarket cards, the GTX 1060 AMP! Edition does stray away from the blower design of the Founders Edition. The dual fans blow down through the heatsink against the PCB. They use two thick heatpipes to pull heat out from on top of the PCB out to the ends of the heatsink. The hot air from the heatsink then vents mostly out into your case. This means on the top, end, and bottom the fan shroud is short to lead room for air to vent out each of those directions. Taking a closer look at the top I was really impressed with Zotac’s design. With a lot of the GTX 1060’s just like the RX 470’s on the AMD side, I see a lot of the companies use a universal heatsink design to cool most of their cards. It’s really clear looking at the top profile that Zotac went out of their way to custom fit this cooler specifically to this card. This means additional cooling surface area on the heatsink in the areas rather than big gaps between the cooler and the PCB. Look just how tight it fits around everything, especially the power connection and the fan header. 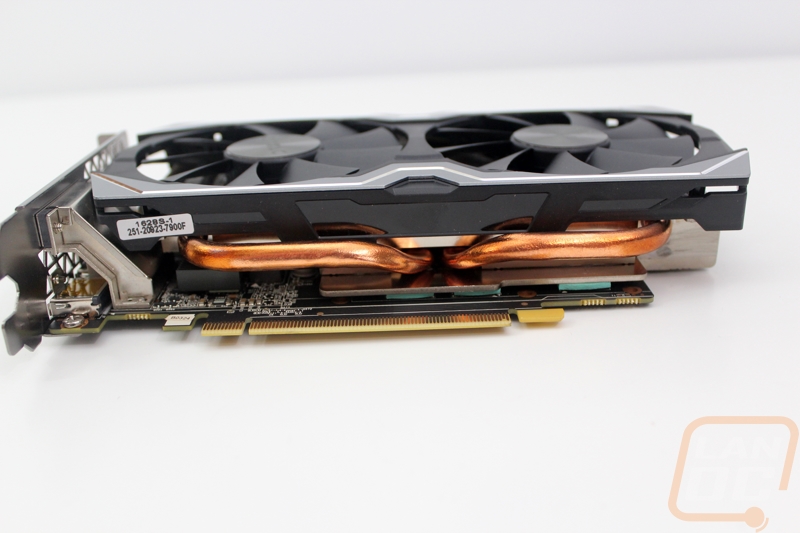 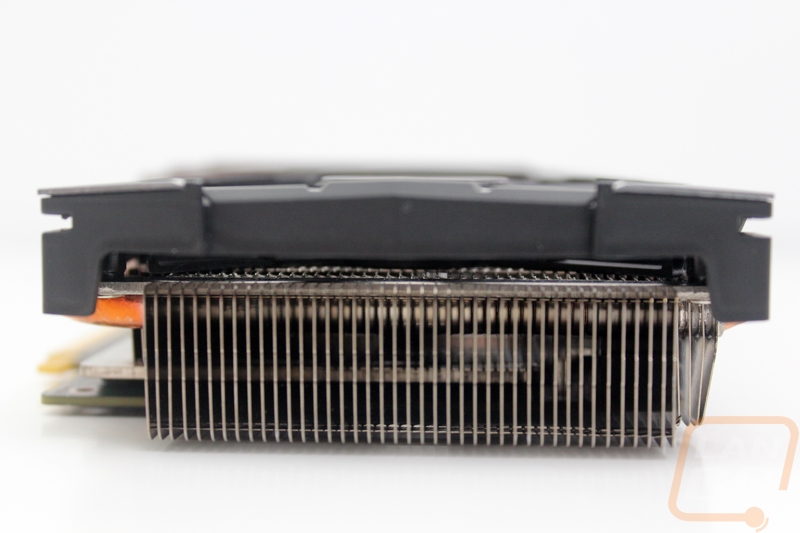 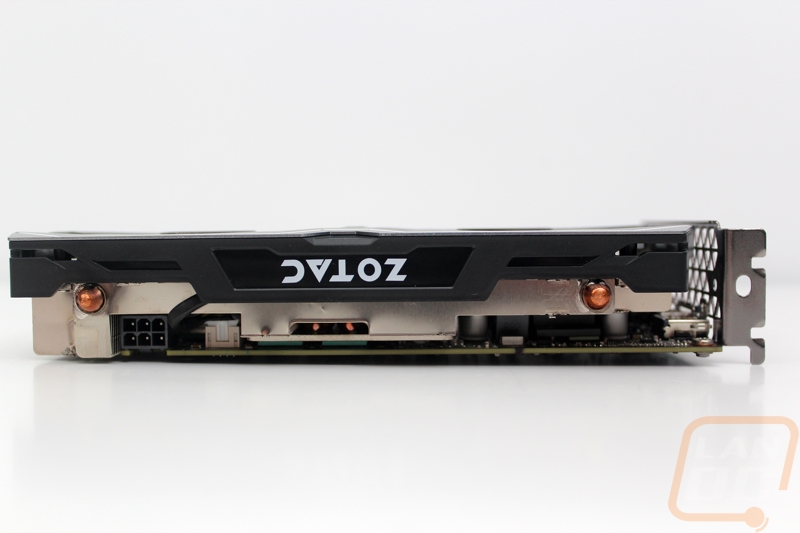 Here is a better look around the power connection. Speaking of, Zotac went with the same 6-pin power connection that the Founders Edition had. Considering the 120 Watt TDP there should be more than enough power available, even if you are overclocking beyond the overclock Zotac provides. The power connection is flipped and the PCB is knocked to fit it to keep the heatsink as much room as possible. 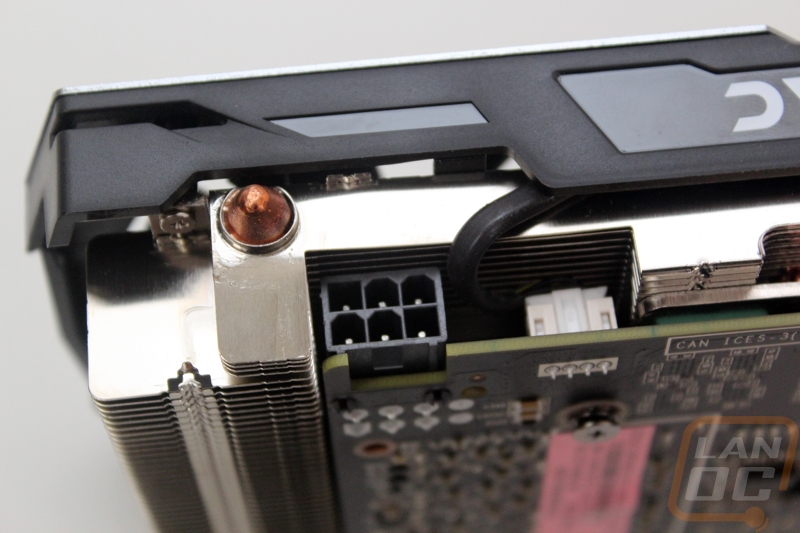 The back PCI slot cover still is completely covered in triangle vents to let any air that goes this direction out. These are the same triangle vents on the Founders Edition, in fact, everything on this end of the card is the same. For display connections, you get the same triple DisplayPort connections along with a single HDMI and a single DVI port up on the second slot. 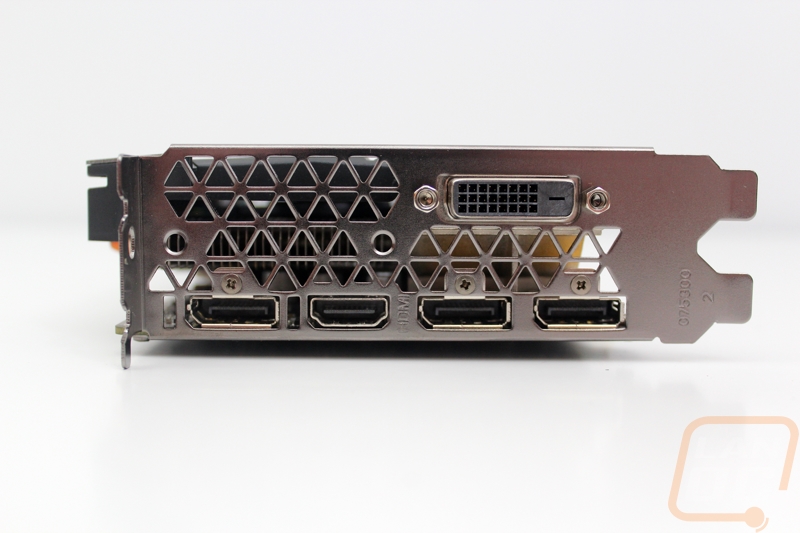 At first glance, I thought the PCB might have been the same as the Founders Edition but there are a few noticeable changes. For starters, the most obvious is the power connection actually being mounted on the PCB, not using a pigtail. To fit that they did move things around slightly up in the top left corner. There are also fewer mounting points for the cooler but Zotac does still leave a few empty holes, though they don’t fit the GTX 1060 Mini as well so I’m not sure what they are for. While there isn’t a backplate, the black PCB does look good. I normally don’t like companies having the cooler stick out past the PCB but given they took advantage of that space, filling it in completely with heatsink I’m not going to complain. 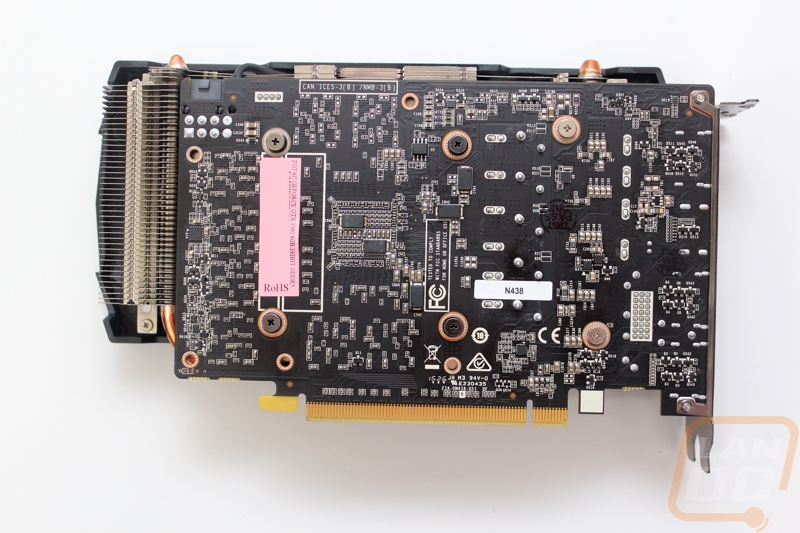 I couldn’t just talk about the size difference between the GTX 1060 AMP! Edition and the Founders Edition without showing it right? Here are the cards together. We can see the huge difference in length and we can also see that the Zotac is a little taller as well. The dual fans look HUGE compared to the blower as well. The Founders Edition, being all metal weighs more and has a little more solid feel. 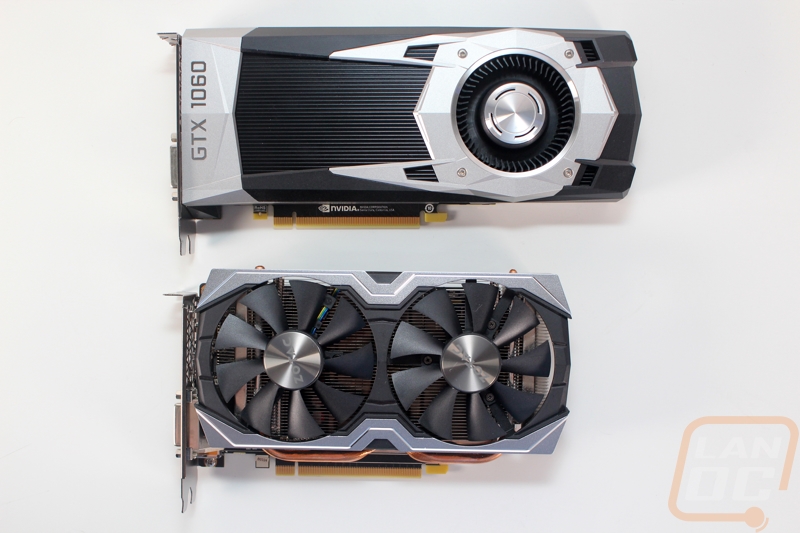 We have 1637 guests and one member online