With my testing finished and having taken a closer look at the Zotac GTX 1060 AMP! Edition how does it stand up compared to the Founders Edition and the RX 480’s that it competes with? Well for starters I’m really digging the styling that Zotac ended up going with. In the past, I loved their use of orange because it is my favorite color, but going with neutral colors is important on a video card. A lot of people try to make sure their video card matches the rest of their build and the black and gray of the AMP! Edition is going to go with about anything. While Zotac didn’t go full ITX with this card (they actually have another 1060 that is ITX) at a length of 8.2 inches the card still comes in a compact form factor, especially when we compare it to the GTX 1060 Founders Edition. This opens up some of the smaller case options while also not looking to out of place in full sized cases.

As far as performance goes, the AMP! Edition ended up outperforming the more expensive Founders Edition in basically every test. They didn’t go crazy with the overclock but the extra clock speed did account for a few FPS in every game tested. That said it didn’t really change the performance comparisons between the GTX 1060 and the RX 480. In nearly every DX11 title the GTX 1060 outperforms but the RX 480 shows its chops in the newer titles with DX12 and especially in Doom with Vulkan. Basically, I think the RX 480 is going to perform on par and above the GTX 1060 once those games take over, but right now most games are still using DX11. So right now I would still give the edge to the GTX 1060. The AMP! Edition, like the Founders Edition, was also very power efficient, being in a completely different class than the RX 480 and RX 470 cards.

Where the Zotac card did struggle was in the cooling performance. The card doesn’t run that bad, but when put under load I would have preferred to see the card run a little cooler, especially considering how cool the Founders Edition GTX 1060 ran. Noise testing also showed that the dual fans did get a bit noisier than the competition when the fans are cranked up, but at normal speeds they were fine.

So is the Zotac GTX 1060 AMP! Edition the card to get? Well, it is a better performer and at a better price than the GTX 1060 Founders Edition. That puts it down closer to the RX 480 8GB cards as well that I think it is faster than in most games. With that in mind, I do think it is a good pickup. I have another GTX 1060 6GB card to check out soon so I will have a better idea of how it compares to other aftermarket GTX 1060’s but I do like it enough that as soon as I finished up my testing It went right into a project build that I will be writing about next week. 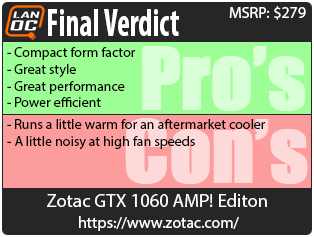 You might call him obsessed or just a hardcore geek. Wes's obsession with gaming hardware and gadgets isn't anything new, he could be found taking things apart even as a child. When not poking around in PC's he can be found playing League of Legends, Awesomenauts, or Civilization 5 or watching a wide variety of TV shows and Movies. A car guy at heart, the same things that draw him into tweaking cars apply when building good looking fast computers. If you are interested in writing for Wes here at LanOC you can reach out to him directly using our contact form.
Discuss this article
Log in to comment
Posts in discussion: Zotac GTX 1060 AMP! Edition