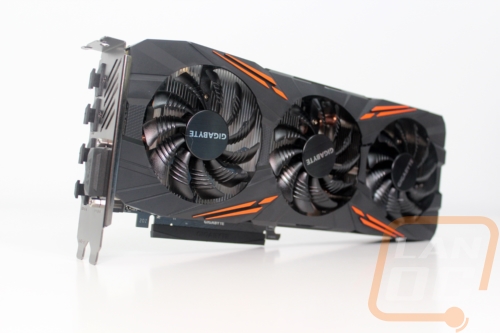 It’s crazy that even a month later, GTX 1080’s and GTX 1070’s are still hard to come by. On my last call with Nvidia, they kept talking about how production has been ramped up at a much faster rate than in the past. Hopefully, this will translate to more availability. While you wait though I did want to take a look at the Gigabyte GTX 1070 G1 Gaming and see how it compares to the 1070 from MSI. I’m especially curious how the triple fan cooler will perform compared to the huge dual fans of the MSI. So today I’m going to take a look at the GTX 1070 G1 Gaming’s features then run it through our benchmark suite and see where it lands. Enjoy!

After all of the drama with a few other manufacturers sending cards with their cards running different firmware than retail cards I made sure to include a GPUz screenshot from the 1070 G1 Gaming. What this tells us is that Gigabyte has our card running the correct clock speed. For full disclosure I also want to point out that this means this card is at a bit of a disadvantage as the GTX 1070 from MSI that I tested was running at 1607 MHz for its base clock and 1797 MHz for its boost clock compared to the G1 Gaming’s Gaming Mode that is default with a base clock of 1594 MHz and a boost clock of 1784. I will get into it more in the performance section, but the Gigabyte card does have a higher overclock mode setting than the MSI should you want to run it. 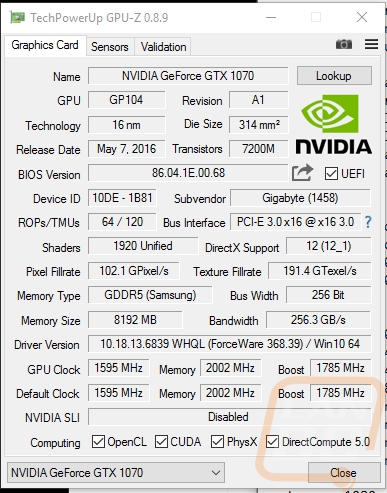 Thank you for your comprehensive GPU reviews - yours is the only site which tests overall cooling and noise (i.e. running the cards at stock vs full fan speeds at load temps) - which helps confirm which cards are have the most efficient coolers.
Read More...