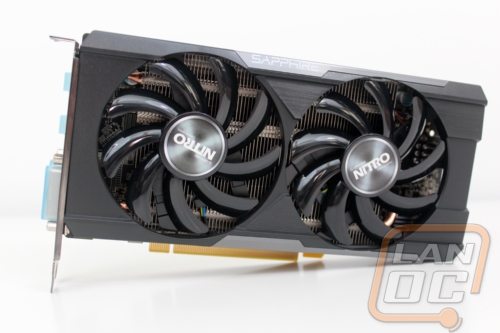 Going into this review I talked a lot about how the 150-200 dollar price point is where it is at for people building budget gaming PCs (under $600). So with that in mind it really isn’t fair to compare the performance to some of the high end cards we have tested in the past, hell some of them cost more than the entire build budget. When I was testing more than anything I was curious about a few things. Would the performance at 1080p be enough for someone to get into PC gaming and enjoy their experience, would the power usage be low enough to help save money with a lower wattage power supply, and if you were building a new budget gaming PC would getting the Nitro R7 370 in be as exciting as the more expensive video cards are to get in for your new builds. On the first count, the performance of the card wasn’t perfect in our testing but for the most part every game I tossed at it was completely playable, even at the extreme settings I test at. With the idea of moving from console gaming to PC gaming in mind, even with AA turned on and the FPS results being between 30 and 60 I think it would be a nice improvement for a console gamer. If you are more sensitive to FPS and you need something over 60 FPS you can reach that too with just a few tweaks in the settings or running a high setting over an ultra setting for example.

Was the power usage good? Well it was a little higher than I was hoping, but you aren’t going to need to get a high wattage power supply. In fact nearly anything with the PCI Express cable is going to push it. The last thing I was looking for was the overall experience. I know this is a weird thing to look for but when I upgrade my PC I am excited about my new video card and I need to show it off. While the Nitro R7 370 isn’t a Fury or Titan card I do think the all blacked out design and dual slot cooler will still give that same experience to the person building their new budget rig.

I think there is still some room to improve in this area of AMDs product line. Specifically I would love to see AMD avoid the rebranding a little more and maybe bring out a budget card based on the same new architectures that they have launched over the last few years. A good example of this from the Nvidia side would be the GTX 750 Ti where they introduced a budget Maxwell card. Going with a cut down card based on a new architecture has the potential to see lower power usage and lower temperatures in the budget cards in my opinion.

So how does the card fit in a budget? Well like I said earlier I think a lot of $600 builds are looking at spending about $150 to $200 for a video card and the Sapphire Nitro R7 370 comes in right in the middle of that. Currently you can pick up a GTX 960 at the $200 price point so I do think the R7 370 might be slightly high, but in a budget build that additional money might mean the difference between getting an SSD or not or something similar. I do think the card performs well for what most will need. Rumors have Nvidia launching a card to compete at a similar price point soon, so I’m excited to see how they will perform against each other if those rumors are true. 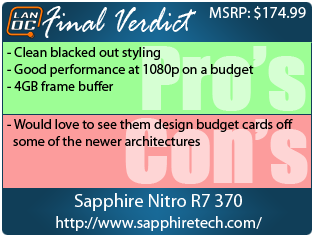 You might call him obsessed or just a hardcore geek. Wes's obsession with gaming hardware and gadgets isn't anything new, he could be found taking things apart even as a child. When not poking around in PC's he can be found playing League of Legends, Awesomenauts, or Civilization 5 or watching a wide variety of TV shows and Movies. A car guy at heart, the same things that draw him into tweaking cars apply when building good looking fast computers. If you are interested in writing for Wes here at LanOC you can reach out to him directly using our contact form.
Discuss this article
Log in to comment
Posts in discussion: Sapphire Nitro R7 370

We have 1578 guests and one member online