I love that not long ago the best performance you could get was an HD7970 or a GTX 680 and now the GTX 770 dominates both of them in nearly every benchmark we put it through. It’s going to be really interesting to see what overclocked models can do, our reference card did extremely well when benchmarking here in the office. In fact I was very worried I would have to give Nvidia a call explaining how we blew up our card in less than 6 hours when our memory clock speeds broke 8000Mhz.

Nvidia really impressed us with the inclusion of the all metal fan shroud that also came on the GTX 780 and Titan. The heavy duty design and eye catching styling really set the GTX 770 apart from all of the cards we have seen from past generations. I said the same thing on the GTX 780 launch, but it’s really surprising how something that is relatively small can make such a big difference when it comes to your impression of the quality of the card. Every time I get it in my hands I really feel like I am holding something special and it helps assure you that you didn’t waste your money on a hunk of plastic.

Speaking of money by now you have to be wondering what the price of the GTX 770 is. Nvidia is suggesting that the 2GB models sell for $399. We really focused on the GTX 770’s performance in comparison to the GTX 680, GTX 780, and HD 7970, now that we know its price it’s really eye opening when you consider the performance and compare it against those cards. Both the GTX 680 and HD 7970 come in $50 more than the GTX 770 at the time of this review while the GTX 770 pulls ahead in performance against them. Even better is when you consider how much cheaper this is to the $649 GTX 780. The GTX 770 comes with the same high end heatsink as the GTX 780 but at a much lower cost. That kick ass fan shroud really sets the GTX 770 apart against the more expensive GTX 680 and HD 7970. 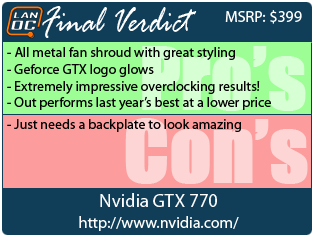 You might call him obsessed or just a hardcore geek. Wes's obsession with gaming hardware and gadgets isn't anything new, he could be found taking things apart even as a child. When not poking around in PC's he can be found playing League of Legends, Awesomenauts, or Civilization 5 or watching a wide variety of TV shows and Movies. A car guy at heart, the same things that draw him into tweaking cars apply when building good looking fast computers. If you are interested in writing for Wes here at LanOC you can reach out to him directly using our contact form.
Discuss this article
Log in to comment
Posts in discussion: Nvidia GTX 770

We have 1209 guests and one member online