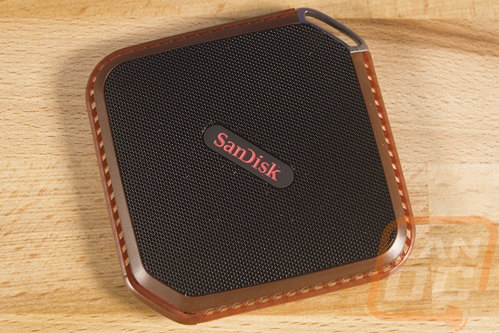 Back in August I took a look at the new WD My Passport SSD and was impressed with its performance and form factor. While it does have an SSD inside it wasn’t really designed to take a beating, something that might happen when you use a drive a lot and it gets tossed around. Well, Western Digital owns SanDisk as well and along with the My Passport SSD they had also sent over the SanDisk Extreme 510 Portable SSD. It is a completely different design and it is designed to handle a little more rough handling. Today I’m going to check it out and see what they are doing differently with this model and take a look at its overall performance.

So the Extreme 510 is in a box but it is setup to be hung from a peg in a retail store, just like more flash drives, SD cards, and other portable storage devices. The front of the box has a large photo of the drive on it. The SanDisk branding is in a red strip down at the bottom and the model is in the top left corner. I love that they did make sure to get the capacity, read speed, and connection type all on the front as well. The background of the cover shows some water drops, hinting at the drives usage. When you open the front up you get a window showing you the actual drive and here they talk about its durability. Specifically, the metal ring that holds it in your bag, its rubber bumper, and IP65 rated water and dust resistance. 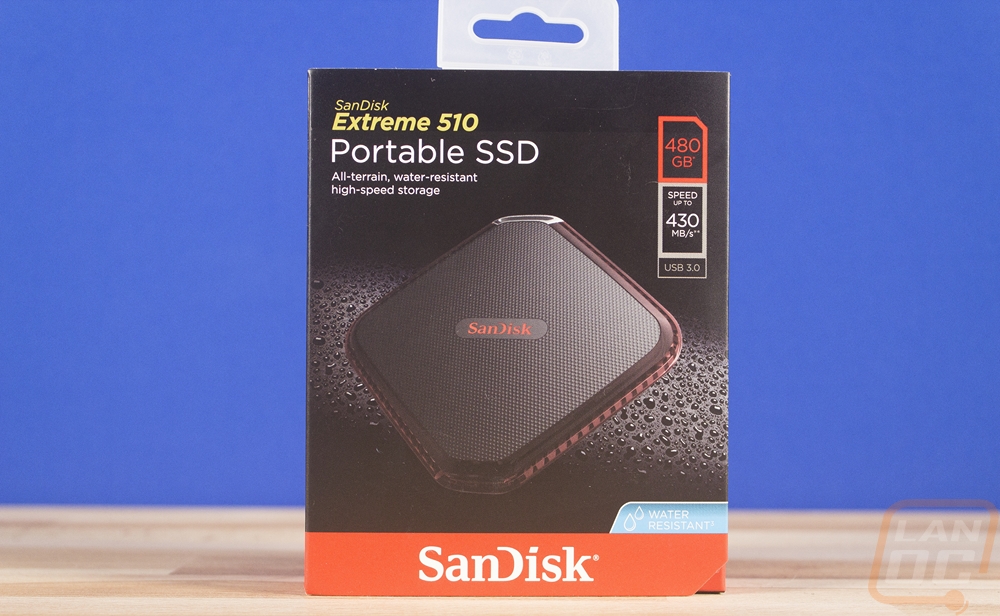 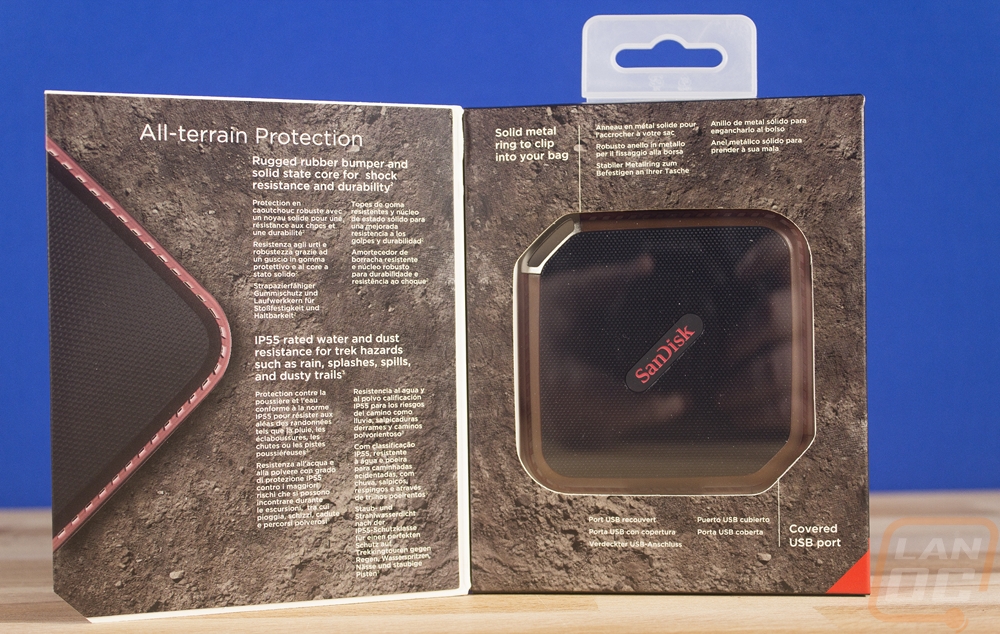 The back of the box touches on those same things, also adding in that this drive is up to 4 times as fast as other portable drives. This is important for people who don’t know what SSD means. Everything is repeated in multiple languages then there is a whole list of legal mumbo jumbo from the claims up above. 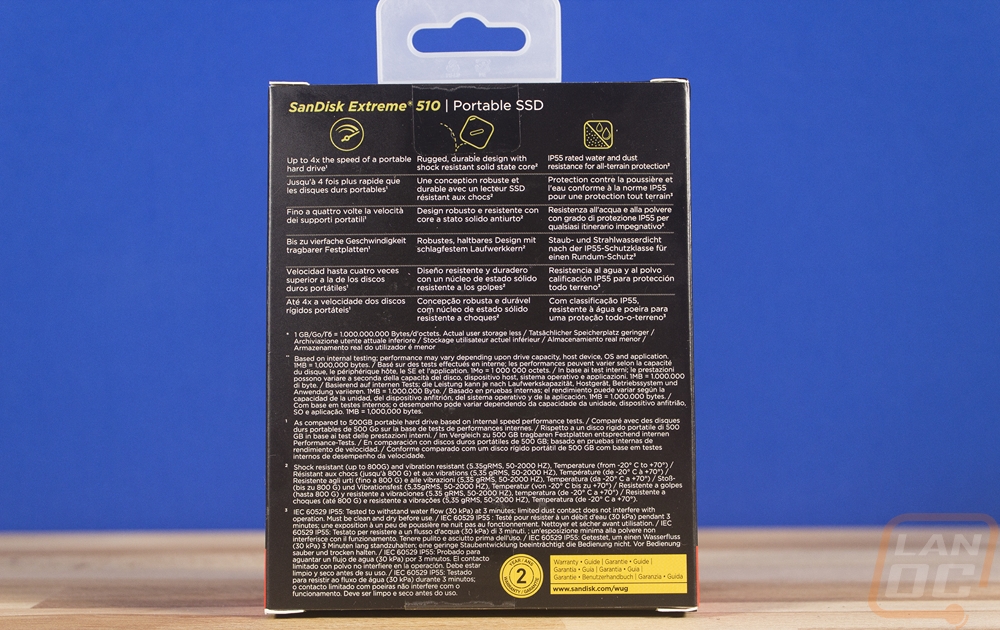 Inside the box, along with the drive itself, you get a short USB 3.0 cable and a folded up instruction manual. The cord is extremely short, less than a foot long in total. It has a standard Type-A connection on one end and a micro-USB 3.0 connection on the other. That is if you haven’t seen one before just like a normal micro-USB port only wider.

Well if you came in here expecting this to look anything like the last portable SSD that I covered I think the first few pictures will clear the air on that one. The WD drive was an M.2 drive with a fancy shell but the SanDisk Extreme 510 is a square. Not only that but it has very unique styling and colors as well. So two of the corners are rounded and two are cut a little short. One of the snubbed edges is where you will find the USB 3.0 connection and the other has a metal section that you can attach a string or a keychain too. So for colors, they went with black in the middle and an off red finish on the outer ring. The top has a textured finish where the outside ring is all rubber, but I will get to that part here in a minute. Down on the bottom is where you will find the model name and the capacity, ours is a 480 GB drive. SanDisk also put a thin rubber finish around the outside edge of the bottom to give it a little traction when you have it sitting on your desk. 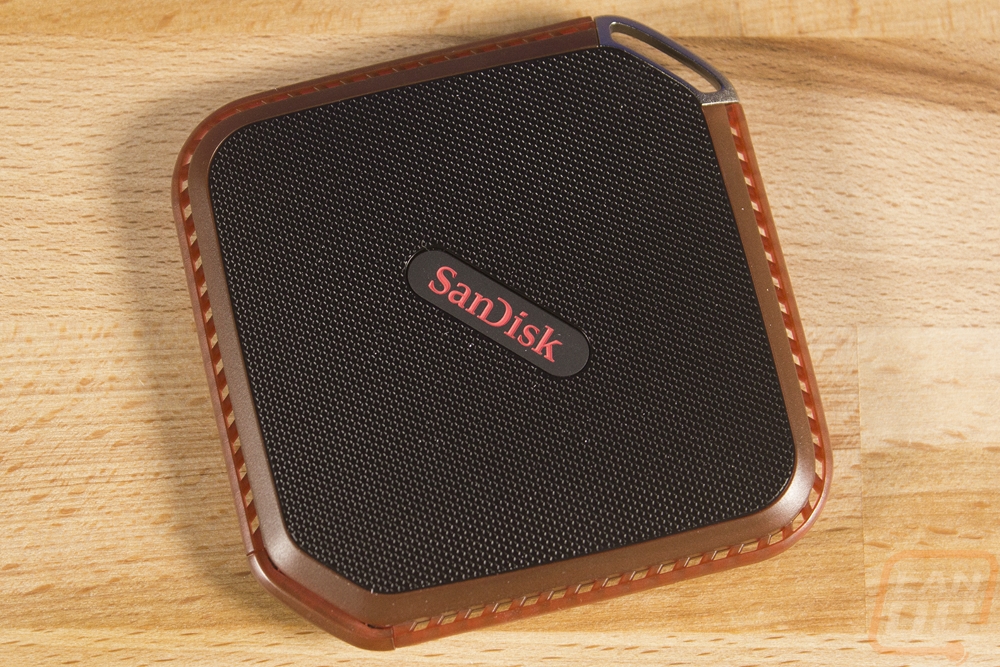 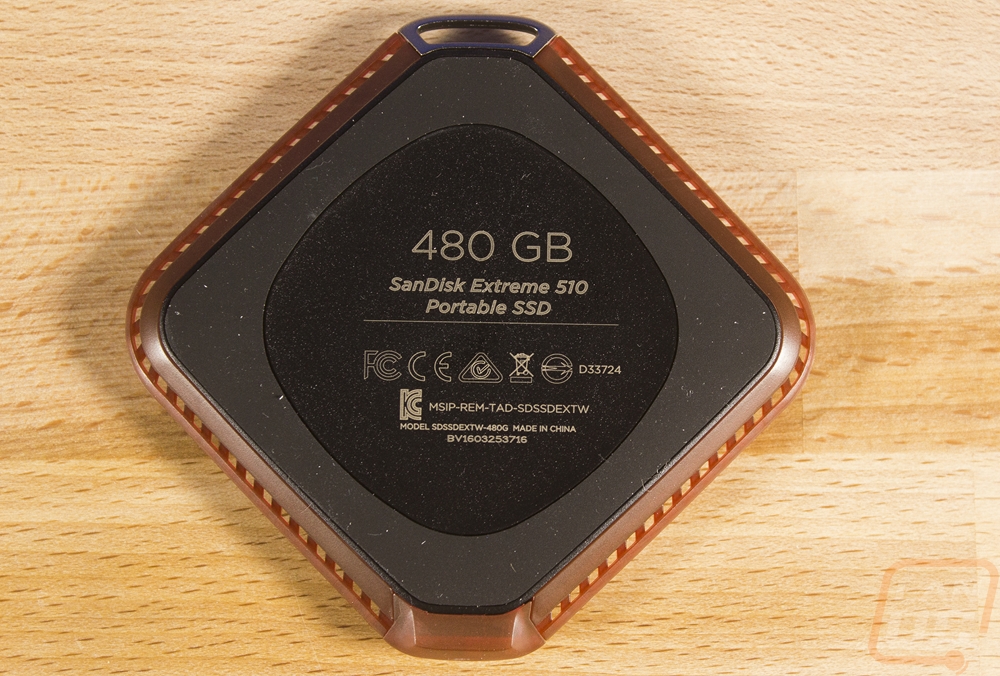 To get the Extreme in its name SanDisk added the rubber ring around the outside edge. In addition to being rubber, it also has small holes molded into it to help absorb an impact if for some reason you drop it.

The rubber ring also helps protect the drive from dirt and moisture by plugging the USB connection when it isn’t in use. With this being an SSD they needed the bandwidth of USB 3.0 and to keep the thin profile they went with a micro-USB 3.0 connection. This is very similar to the normal micro connection on your phones, in fact, you can plug a 2.0 micro into it on the right side, but there is an extra section that helps get the additional bandwidth. They also include a cable but if you were expecting anything long you are going to be disappointed. The drives cable is about 6 inches long. Because of that, you can expect to have the drive hanging when you plug it into full-sized PCs, but with laptops, it can sit on the table next to your connection. 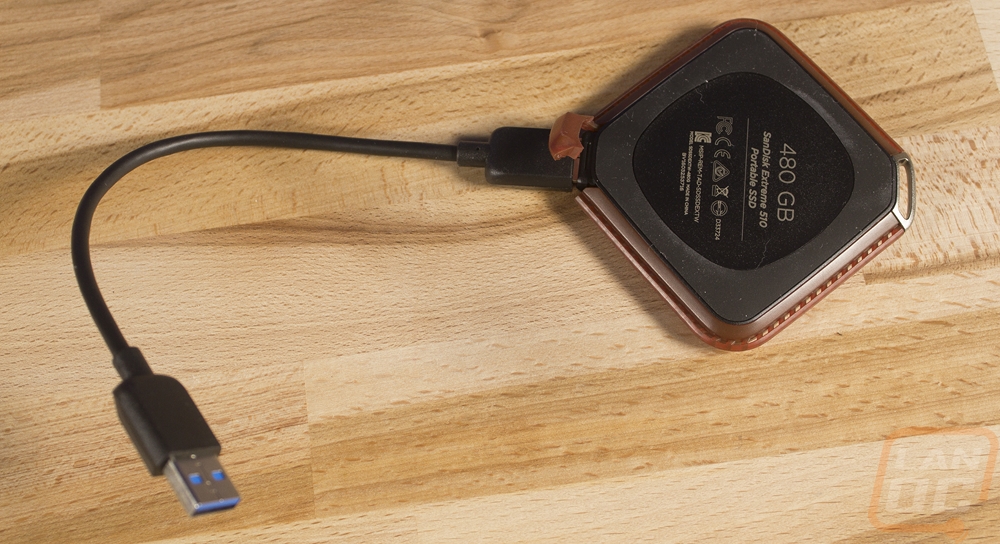 Because of the square shape you might think this is a lot larger than the WD SSD drive, but it isn’t actually too bad. It is 2.98 inches wide on both dimensions and then is .42 of an inch thick. For a better comparison, I put it up next to the original Pixel XL. It is about half the size of the phone but is a little thicker.

I’ve mostly just been using the drive with my laptop and to copy files between PCs around the office but to get hard numbers I did run it through a few of our standard benchmarks. SanDisk rates the drive at up to 430 MB/s read speeds and 400 MB/s write speeds so I wanted to first see how it performed for me for overall transfer speeds. To do this I tested using CrystalDiskMark. As you can see it did fall a little short of the claimed speeds but 395 read and 389 write isn’t too bad for a portable SSD. 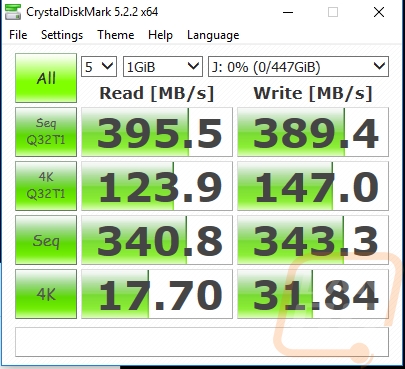 To confirm though I tested again using ATTO Disk Benchmark, this is sometimes what the manufacturers use to get their numbers. As you can see the Extreme 510 ended up having read speeds in the mid to low 420’s and write speeds were actually faster in the mid to high 420’s. Even better! 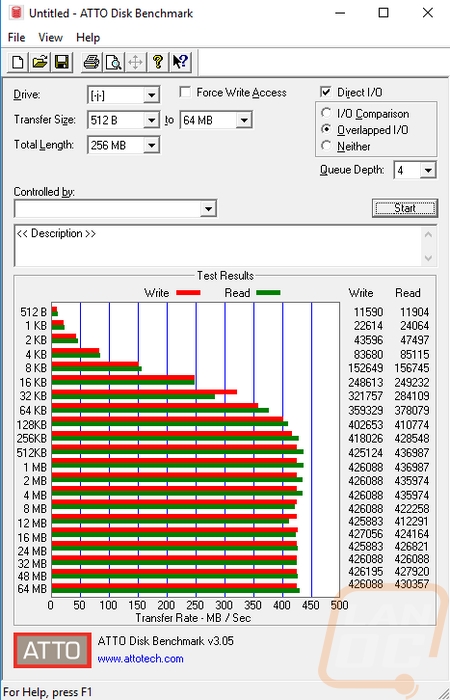 I then ran through Anvil’s Storage benchmark where we can see how it handles the higher queue depths (not all that well, unsurprisingly) and saw 405 on the read speeds and 385 on the writes. Those numbers come in closer to the CrystalDiskMark results. 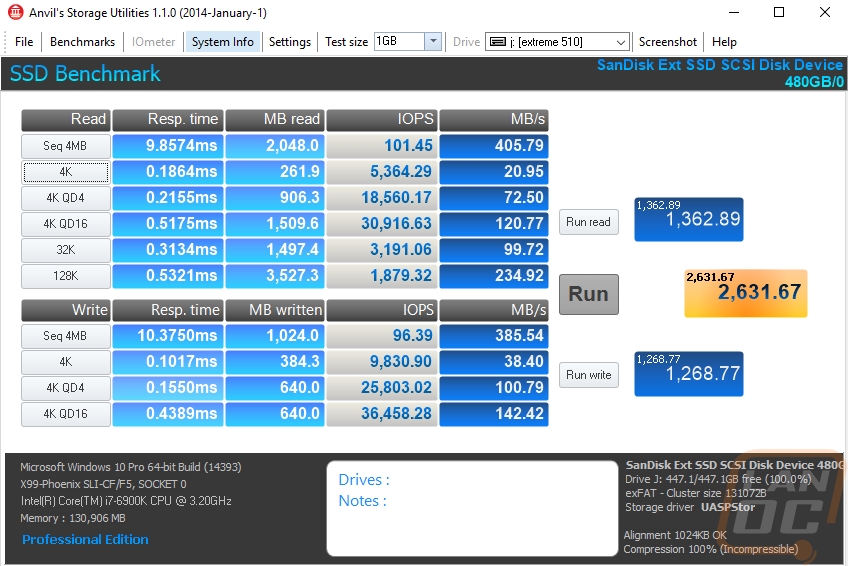 For my last test, I went old school and just transferred a large folder filled with small and large files. The same one I tested the WD drive on as well. This to me is really the main test as I use my portable drives mostly for transferring files in windows. Because of that, I was really happy with the 315 MB/s result considering a lot of the SSD’s inside my PCs don’t see that on a lot of similar file transfers. 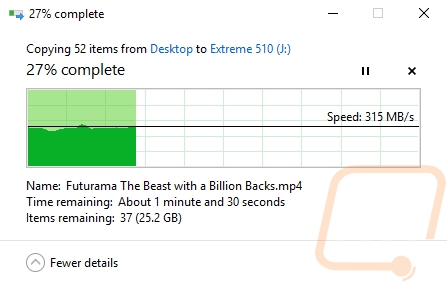 Then to finish things off I did also run a CrystalDiskInfo result on the drive for anyone curious about any of the extra details. 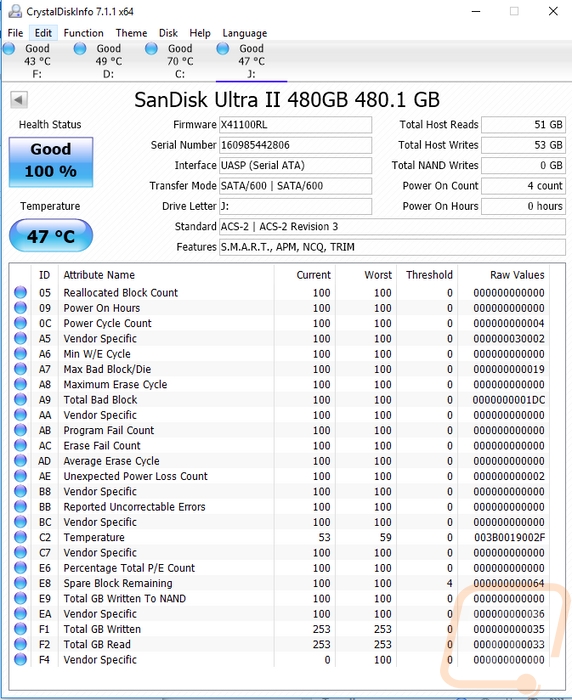 Because the WD SSD drive was the last one to come into the office prior to the SanDisk Extreme 510 Portable (actually they came in at the same time) I spent a lot of my time testing this drive comparing the differences between them. Given that they are both SSD based drives and they are from the same parent company I think this is fair, not to mention the WD My Passport SSD earned our Top Honors award so I was really curious if the 510 would be able to keep up. For the most part, it kept up in performance and that says a lot. But it was the design that I was most curious about. Why would you go with one over the other?

Well the main thing with the SanDisk Extreme 510 Portable SSD is its durable construction. They gave it a rough finish to help you hold on to it, but if you do drop it the rubber bumper around the edge should help with the impact and with it being an SSD it's going to handle drops better anyhow. The design, when the cord is unhooked, also can withstand some dust and moisture. It even has an IP55 rating meaning it is protected against dust and water spray from all directions.

The design does feel a little old compared to the WD drive, mostly because of the lack of USB Type-C but also the styling of the WD drive makes this one look dated. Really though the only issue I ran into during my testing was that the cord was extremely short for use with a desktop PC. Now, of course, you don’t need an “extreme” drive for your home PC, but when you get home and go to take everything off the drive to back it up it is going to be hanging from the short cable.

Overall I ended up liking the drive more than I expected. With the WD drive, I felt like I would take advantage of its speed around the office between PCs but this drive is going into my laptop bag. I can feel confident that even if it gets banged around, dusty and dirty, or even a little wet that my files are still going to be there and I’ll be able to get them quickly with the SSD speeds. 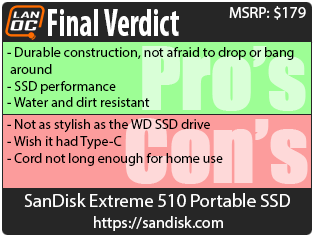 You might call him obsessed or just a hardcore geek. Wes's obsession with gaming hardware and gadgets isn't anything new, he could be found taking things apart even as a child. When not poking around in PC's he can be found playing League of Legends, Awesomenauts, or Civilization 5 or watching a wide variety of TV shows and Movies. A car guy at heart, the same things that draw him into tweaking cars apply when building good looking fast computers. If you are interested in writing for Wes here at LanOC you can reach out to him directly using our contact form.
Discuss this article
Log in to comment
Posts in discussion: SanDisk Extreme 510 Portable SSD 480GB

We have 1340 guests and one member online