Given my past experiences with network drives, I put off getting the TS-451+ setup for a while. But once I did get to it I was disappointed I didn’t do it sooner. Setup was a lot easier than I expected. QNAP did a great job packing in all of the not so user-friendly features that power users like while still making setting up the basic features that everyday user wants. They even made it simple to setup cloud-based access to all of your files from your mobile devices. Even with all of that, my focus was almost immediately on all of the awesome apps that are included with the NAS and that doesn’t even count all of the other apps available on the app store. App of the apps combined with the two VM/Docker apps takes the TS-451+ from being your everyday NAS to something closer to an easy to use server for your home office. Really the only limitation is the power of the NAS itself, while that Intel CPU is quick, it doesn’t have the power to run multiple VMs on top of the apps and basic functionally.

Adding the HDMI connection and all of the apps specifically for the TV-based interface just add even more to the functionality. You can centralize all of your home or office storage and also use it to turn your TV into a smart TV, who would have thought.

Really the only big issue I found with the TS-451+ was with the basic controller that they give you for the TV functionality. It works for a few of the important apps, but a lot of people are going to be drawn to things like the Facebook app and the browser and with all of those you really need a mouse and keyboard. Moving to a remote like some of the smartTVs use these days (touchpad and keyboards built in) would help a lot.

All of the extra functionality is great and the TS-451+ does a great job of the basics as well but you do need to keep in mind that picking up one is a big purchase. You are looking at $444 for the NAS plus you will need hard drives, you don’t even want to know what it would cost with four of the 8TB Seagate NAS drives I tested with. But I do think it is a good investment, moving your data storage off all of your PCs and hopefully using a redundant RAID configuration is a good decision. There is nothing like losing all of your data to motivate you to make sure it never happens again. If you have been lucky enough to not have a hard drive or SSD die on you, go pick up a lottery ticket on your way to picking up the TS-451+ and a few drives because it is bound to happen at some point, especially to power users with multiple drives. The TS-451+ is a lot like the Thecus NAS that I have reviewed in the past. It does cost a little more, but that cost is getting you easier to work with software and a LOT more in APP variety and quality. 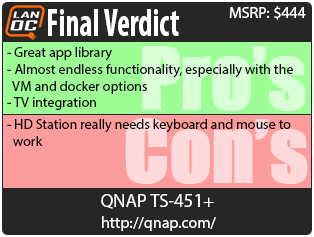 You might call him obsessed or just a hardcore geek. Wes's obsession with gaming hardware and gadgets isn't anything new, he could be found taking things apart even as a child. When not poking around in PC's he can be found playing League of Legends, Awesomenauts, or Civilization 5 or watching a wide variety of TV shows and Movies. A car guy at heart, the same things that draw him into tweaking cars apply when building good looking fast computers. If you are interested in writing for Wes here at LanOC you can reach out to him directly using our contact form.
Discuss this article
Log in to comment
Posts in discussion: QNAP TS-451+

We have 1467 guests and one member online