The hardware side of things with network drives is mostly cut and dry. Faster hardware translates to things like faster RAID rebuilding times and faster transfer speeds. So when you are looking for a NAS the biggest thing you need to look at if the software. You see, it can be slow and buggy or fast, filled with features or lacking any features or options, or it can even be too hard to navigate or way too dumbed down. Even just a few years ago a lot of the network drives I tested were still a little on the tough side to navigate through with wizards they were at least easy to setup. QNAP has been a big example of a company who has put software first for a long time and it shows. Getting the TS-451+ up and running consisted of getting it booted up and looking on our router to find its IP but they have even made that simpler with software to search your network for QNAP NAS. Once I was in, the first thing the software asked was what type of use it would be getting. Knowing I could go back later and install anything I needed I went the business route for a cleaner install. From there it asked a few simple questions like what name the NAS should have and then it set everything up. 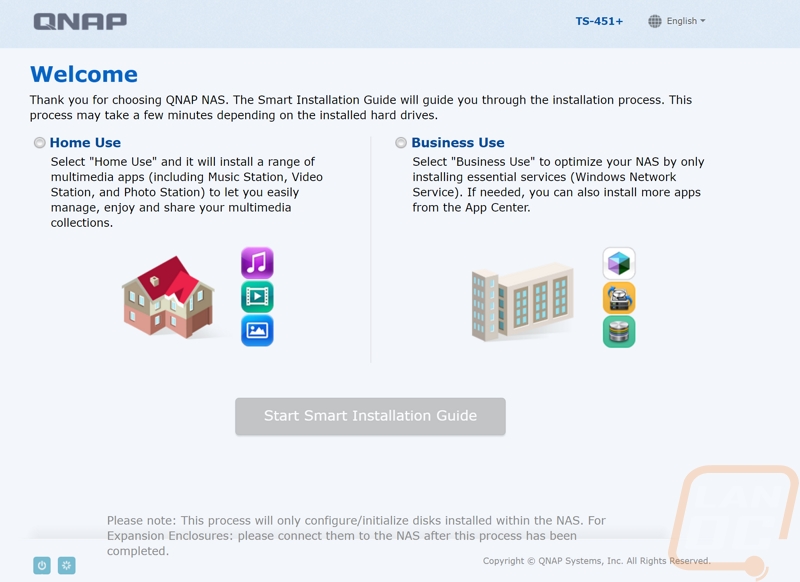 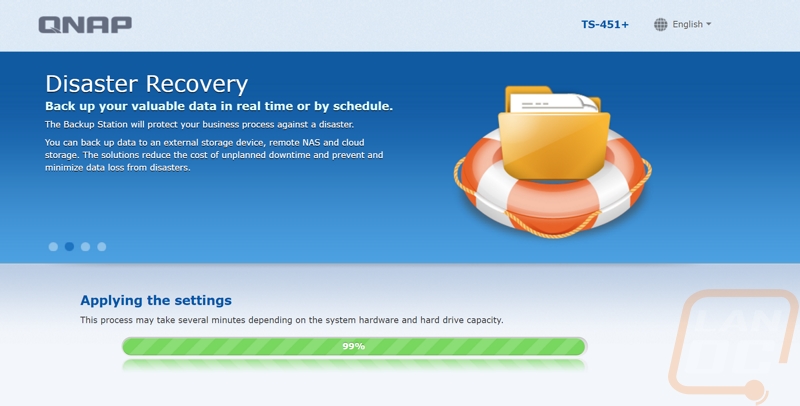 As soon as I got booted up it let me know that the firmware needed to be updated and with a couple clicks it downloaded and installed the new firmware. This did lead me to an issue. After it rebooted I couldn’t get back into the software and I fought with this for about 20 minutes, looking online at people with similar issues. I used Putty and SSHed into the NAS and couldn’t for the life of me figure it out. Then I decided to try to get in using https and I logged right in. Going back into the settings I saw that it defaulted to port 8080 for the non-secure page, flipping that back to port 80 fixed my issue and I was back up and running. 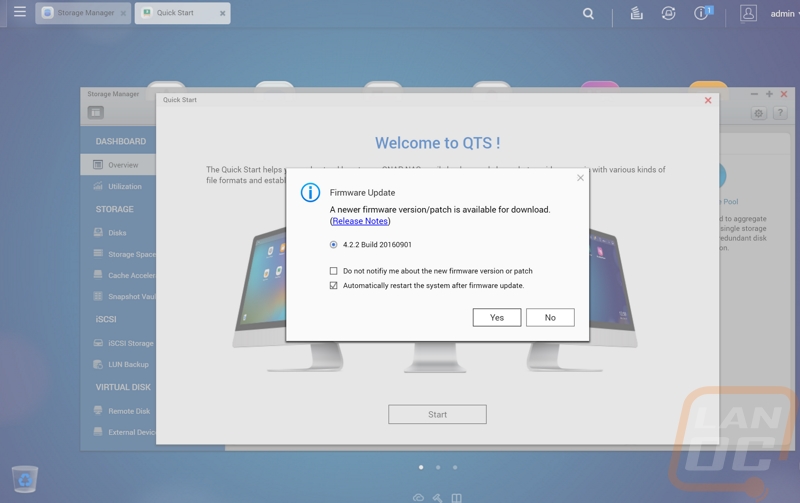 From there I started by setting up a single volume to start off my testing. I do love that QNAP offers a few other options like creating storage pools to allow for more flexibility later on, but for my testing, a single volume did the job. 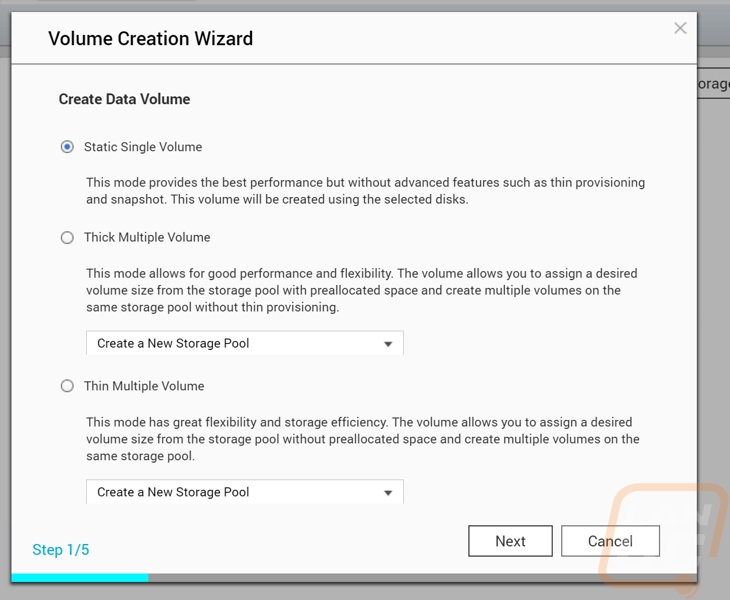 While waiting on the RIAD 0 to setup I started poking around, starting with the hardware. I wanted to see what the TS-451+ comes with and check out the temperatures. I found all of this together in the hardware information page under system status. The TS-451+ comes with an Intel Celeron J1900 BayTrail CPU. It is running at 1.99 GHz and it should burst up to 2.42 GHz if needed, assuming QNAP has allowed that. You get 2 gigs of RAM with 1.85GB of that being usable after the onboard takes its share. The CPU was running at a comfortable 46C while working at 32.2% and the motherboard was running at 42C. The hard drives while all formatting were a little warmer at 50C and the two middle drives ran warmer than the two outer drives by 3 degrees. 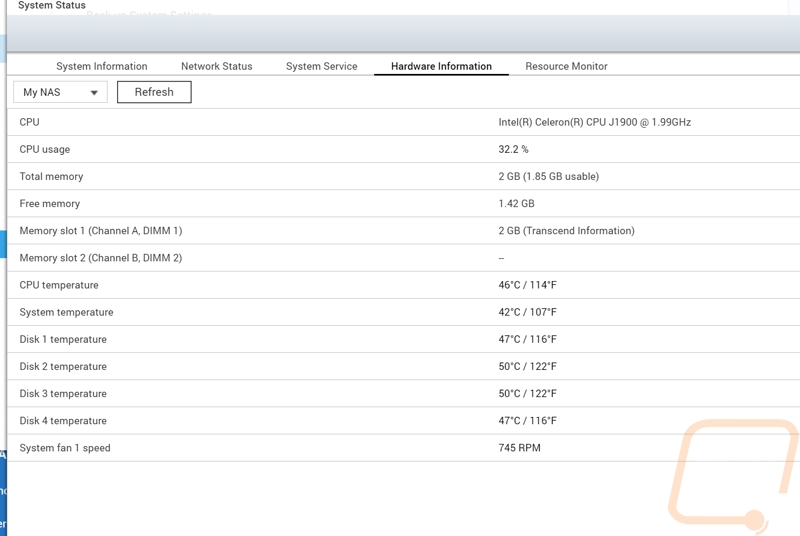 Beyond being able to setup RAIDs, JBOD, and even Virtual JBODs the TS_451+ can also bump up performance by swapping out a drive for an SSD to use as a Cache. You have the option to set it as a read only or a read and write cache. They also give you the option to pick between a least recently used algorithm or first in first out. On top of that, you can also setup a RAID 0 for the cache drives to bump the speed up even more. In my case, overall capacity and redundancy are most important, but the idea of running one or two storage drives and then running a RAID 0 cache is interesting if you need faster transfer speeds and access times. QNAP has a few higher end NAS that use this same tech but have support for M.2 drives for even better speeds. Considering our office NAS’s speeds, a NAS with an M.2 drive for cache sounds really appealing. 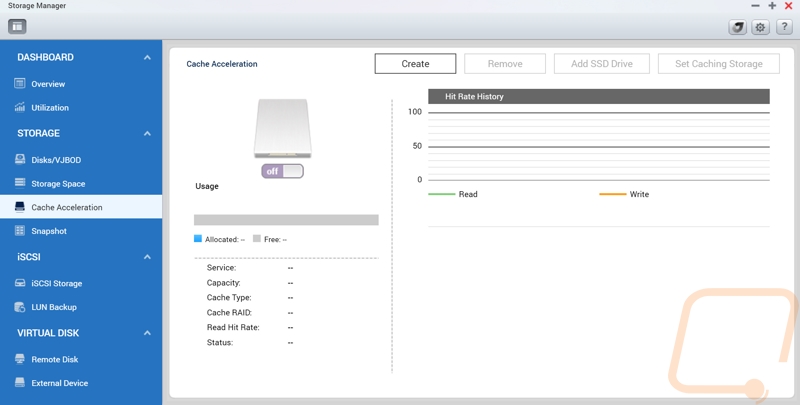 When doing your maintenance you can also go in one by one and take a look at each drives health and information. Each is labeled on a photo of the TS-451+ to help you find a drive if there is an issue. 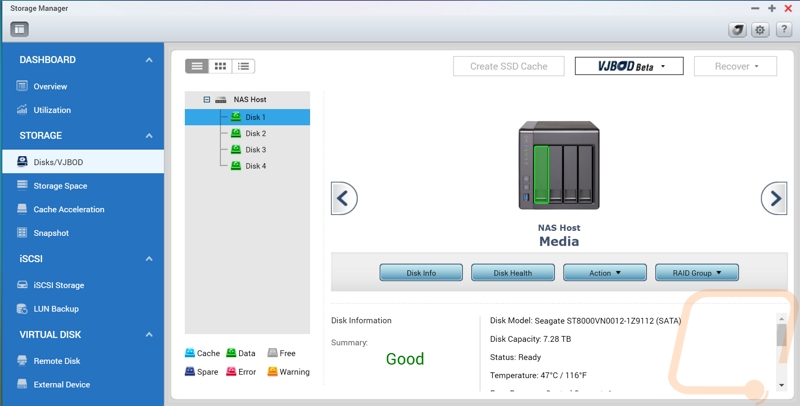 By default, even when setting the TS-451+ up with the business configuration that doesn’t install everything. You do still get a few interesting apps on the NAS. It sounds like a given, but I love that you get a file explorer right out of the hole. I’ve had a few NAS in the past that had horrible file browsers that basically didn’t work. There are also a huge amount of backup options build into QNAPs OS. These options are in the Backup Station app and cover both backing up PCs to your NAS as well as remote backup options for the NAS itself with things like Amazon S3, NAS to NAS, and even external backup options. At their core, NAS are heavily used for backing up home and office PCs so it's not a shocker that QNAP put a lot of focus on this, but even so I am impressed with all of the options available and there are even more available as apps as well. 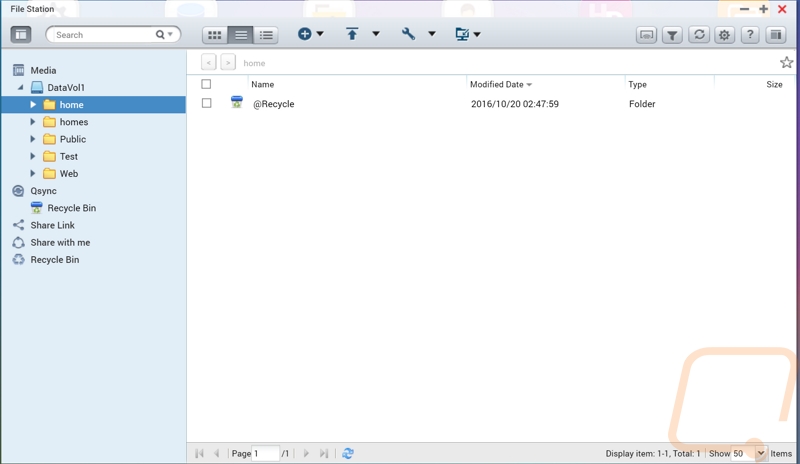 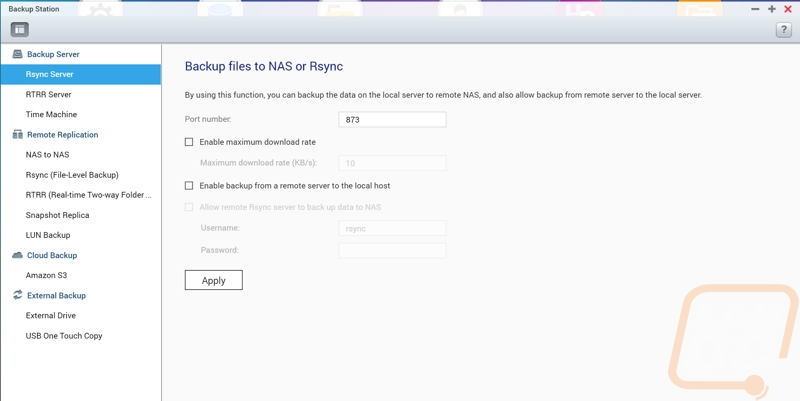 There is also the myQNAPcloud option that I touched on a little when we saw the sticker on the side of the NAS. Once you have everything on your TS-451+, you want to be able to access it even if you are away from home. To make this simple QNAP has iOS and Android apps that simplify syncing directly to your NAS. There are also a few different VPN options in the settings to get you directly into your network when traveling. As someone who works from a home office and travels from time to time, without a way to access the files on my network I would be SOL, in fact, that happened to me on my recent vacation when a scheduled power outage took down my internet and most of my network.

On top of the included apps and trust me I wasn’t able to touch on them all. QNAP also has their AppCenter. This is basically an app store a lot like the google play store or Apples App Store. They have broken all of the apps up into different categories and made it as simple as one click to install. Like the included apps, there is just no way I could cover everything but just know that basically anything you can think of is available. 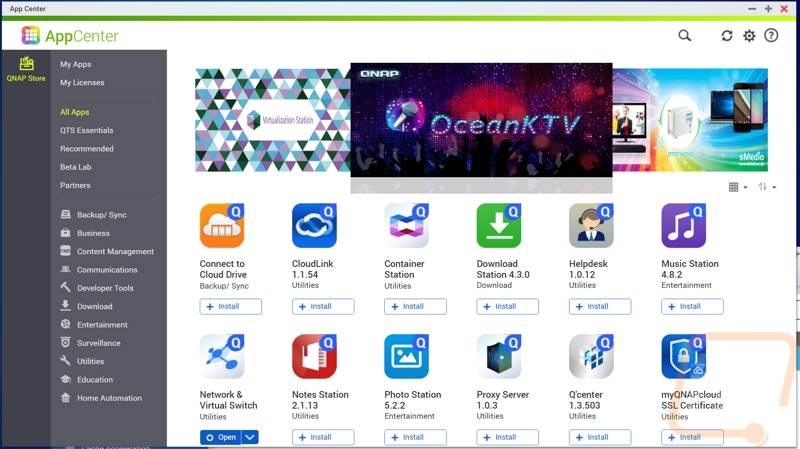 Two of the apps really caught my eye, not just because they are cool, but because they completely expand what I thought a NAS was even capable of. They have Virtualization Station and Container Station. The first one helps you actually run full VMs directly on the TS-451+. You have the option to set your own VMs up or you can use Bitnami and you have access to a whole selection of ready to go VMs with almost unlimited options available like different content management setups or infrastructure VMs. Container Station is similar but uses a docker style configuration with one click installation options for things as crazy as a Minecraft server. The Bitnami software, on the other hand, lets you search and find anything even other game servers like TF2 servers. Really the only limitation is the power of the NAS itself. 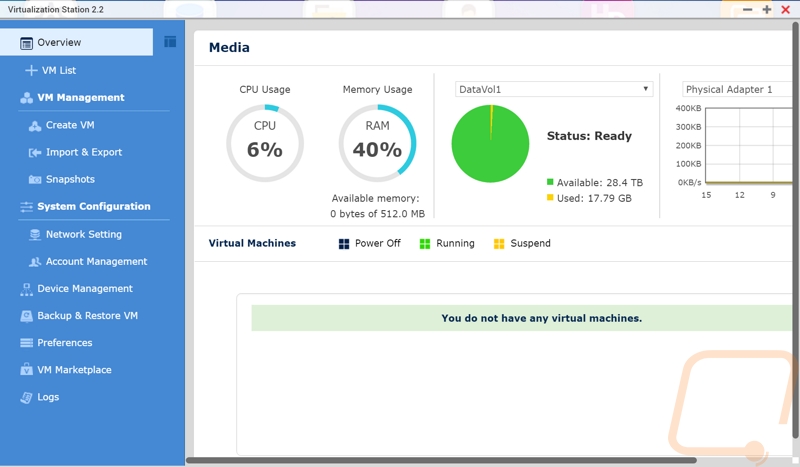 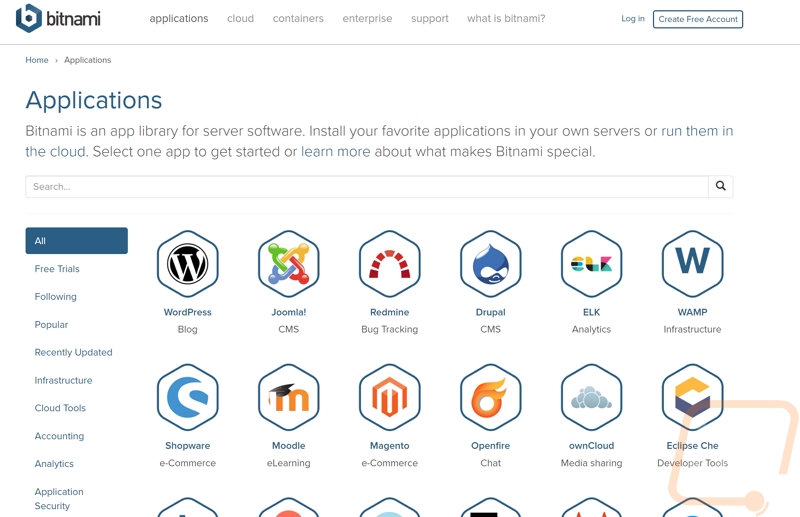 Of course, I couldn’t spend all of that time with the TS-451+ and not try out the whole TV-based interface. I hooked the NAS up via HDMI and after installing HD Station I was ready to go. You get access to a lot of the features you would find on a smart TV or an Android-based TV box as well as other features. Navigating the menu using the included remote was simple and it worked well with things like Plex. Getting into the browsers, LibraOffice, Facebook, etc on the other hand really requires a mouse and keyboard to do anything. I couldn’t do anything at all in them other than back out and even that took a lot of button mashing. If they had a controller with a small keyboard and a touchpad to act as a mouse this whole thing would be amazing. Even with the issues, it is a great way to get a TV on the network without adding another device and it also could give you direct access to all of the files stored on the NAS without having to stream them over the network. 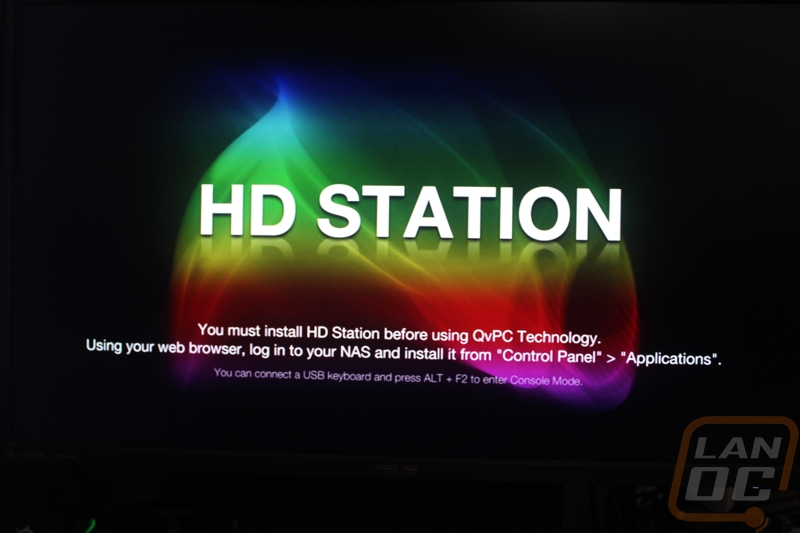 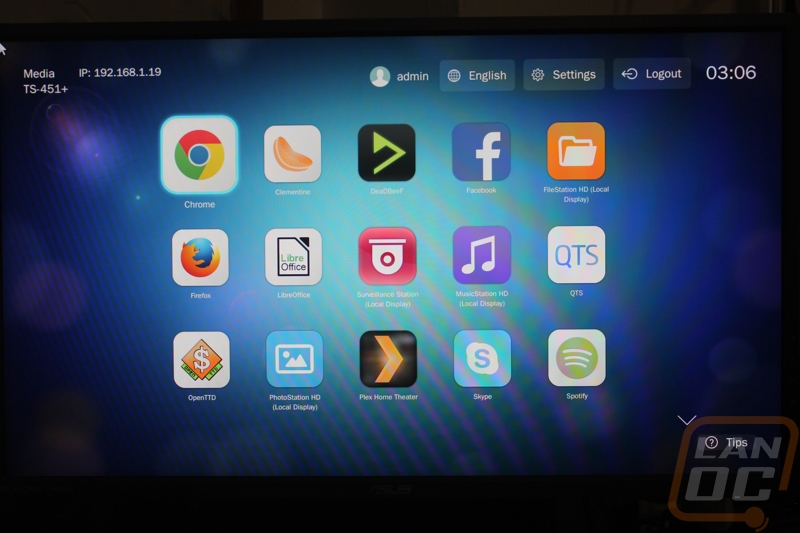 We have 1496 guests and one member online