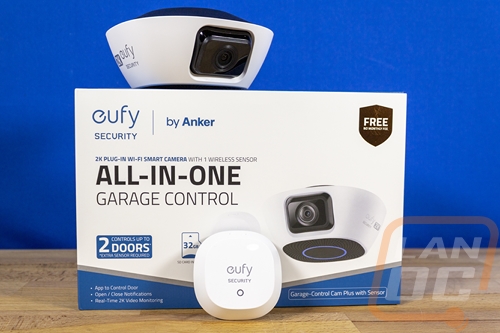 With eufy launching the Garage Control Cam Plus and the single door Garage Control Cam I was excited that I could potentially cut another app out of my smart home without losing the ability to remotely open and close our garage door. Combining that with the camera was a bonus as we did already have a camera in the garage. That said the differences in the camera ended up being what set the Garage Control Cam Plus apart from our old setup with MyQ and a separate camera. The 2K resolution was great and was a big improvement from our older camera, but it was the wider field of view that I like the most. Even with our older camera in the highest corner, it covers half of the area that the Garage Control Cam Plus does. The Garage Control Cam Plus has the same software that other eufy cameras have and I like how simple it is to set up and use. With the garage control, you do need to take a few extra steps and I would highly recommend attempting to do the wireless garage control before going wired like I did, but it is good to know that if your opener isn’t supported that wired is an option which our MyQ setup didn’t have.

A big feature that goes under the radar is the Garage Control Cam Plus does support RTSP which means if you run your own camera server you can add it. Eufy leaves that option as well as storage on the included MicroSD card as two options that avoid storing your video on the cloud or paying for cloud storage.

I did run into a few issues with the Garage Control Cam Plus in my testing and some of them should be easy to fix on the software side. A good example of this is not having the option to turn off the date and time overlay which becomes an issue when using RTSP which if your own software also adds the date and time you end up with two overlays. I also felt like the alarm when opening and closing was too loud which lead to me turning it off, having the option to adjust the volume on that would be helpful because I didn’t want to get rid of it altogether, I just didn’t like hearing it everywhere. I also wish that with the Garage Control Cam Plus model that you could turn off the second door, as it is right now if you aren’t using that second door you still have the button for it on every screen where the standard model doesn’t. With the Plus model including an SD card, I wouldn’t be surprised if others end up with it but only need the one door controlled currently. On the hardware side of things, I feel like the Plus model should come with the second sensor and not force you to buy it separately. On that same note, I’m surprised that the non-plus version has a different base at all. The base Garage Control Cam should have the option to add the second door and the plus model should give you the second sensor so you are good to go. I know I’m in the minority on this one, but I would also love to see a POE ethernet option, wired is always going to be a more reliable network connection and wireless cameras can quickly clog up your wireless bandwidth. POE would also make installation even easier. Beyond that, I did run into issues with our door sensor losing sync which I didn’t have issues with on our MyQ setup except on a few -10 degree days. I may have to RMA ours if the issue continues but it isn’t consistent enough to show anyone.

As for pricing, the Garage Control Cam Plus that I have tested today has an MSRP of $129.99 and the single door model without an SD card is $99. The second door sensor to get both doors up and running will cost you $29.99 but as of writing this, it does look like eufy has added a bundle on Amazon that gets you the Garage Control Cam Plus and the second sensor for $139.99. For comparison, the competition is all over the place. Wyze has a garage controller that comes paired up with one of their cameras which will cost $43.99. This doesn’t have wireless remote options at all and the camera is a standard 1080p Wyze Cam v3. On the other end of the spectrum, Chamberlain and Liftmaster have MyQ which you can get the controller itself for between $25 and $50 without a camera or spend $300+ for a new opener with it built in and then add their optional 1080p camera for $90. In other words, eufy’s two Garage Control Cam options aren’t the cheapest option but do have the best camera and with the plus model is the only option with support for two doors. 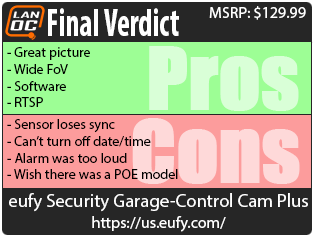 You might call him obsessed or just a hardcore geek. Wes's obsession with gaming hardware and gadgets isn't anything new, he could be found taking things apart even as a child. When not poking around in PC's he can be found playing League of Legends, Awesomenauts, or Civilization 5 or watching a wide variety of TV shows and Movies. A car guy at heart, the same things that draw him into tweaking cars apply when building good looking fast computers. If you are interested in writing for Wes here at LanOC you can reach out to him directly using our contact form.
Discuss this article
Log in to comment
Posts in discussion: eufy Security Garage-Control Cam Plus