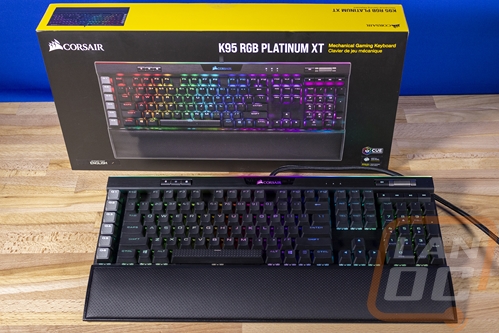 Well here it is, here is the K95 RGB Platinum XT. It actually looks exactly the same as the previous K95 RGB Platinum. That is because Corsair didn’t make any changes to the layout. This is still a full-sized keyboard which includes the weird bottom row that they like to use. This was one of my complaints with the last model so it was a bummer to see it still continue, but basically, this makes it very hard to get a new keycap set when it isn’t a fully standard layout. Thankfully Corsair did at least make some improvements to the keycaps that I will talk about later. The key layout other than the bottom row is standard which includes large legends on the keys with a slightly “gamer” font that isn’t too over the top and legends for modifiers all have their names spelled out, not the symbols. Full-sized also means a number pad over on the right, but the K95 RGB Platinum XT goes farther than that with the 6 G keys on the left and media keys on the right above the number pad. This isn’t the smallest keyboard either with a thick bezel up on the top, but Corsair does keep the side bezels thin at least. 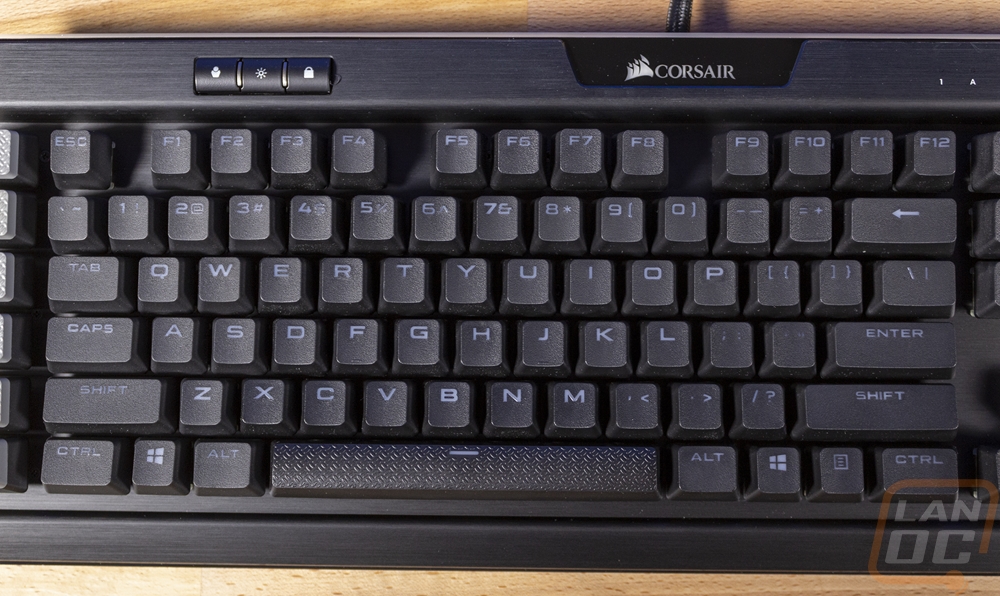 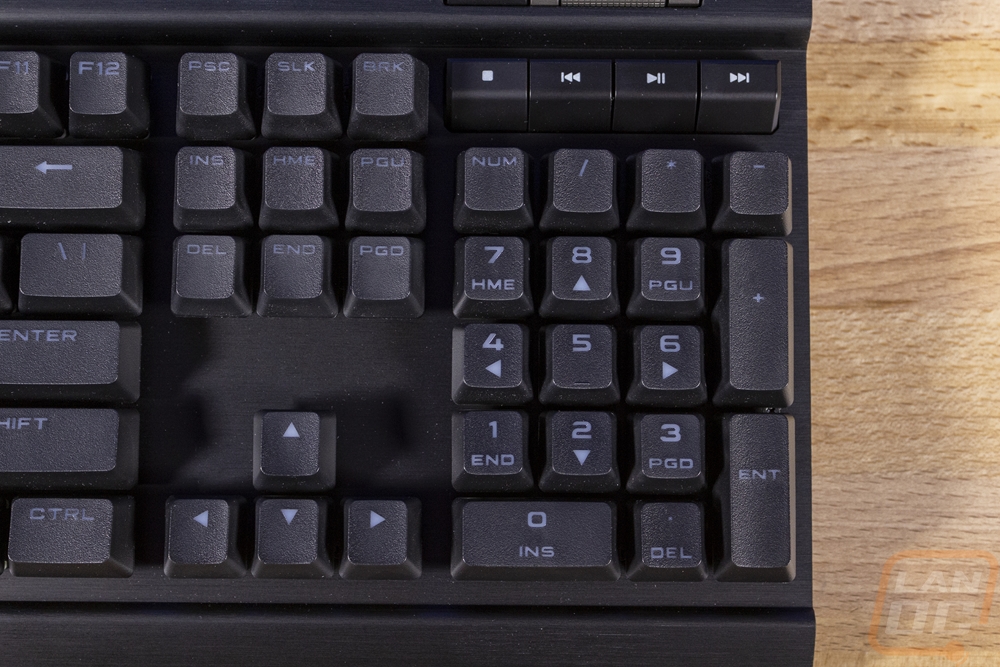 Speaking of the bottom row, here is a closer look at the spacebar which, like the G keys has more of a texture to it. 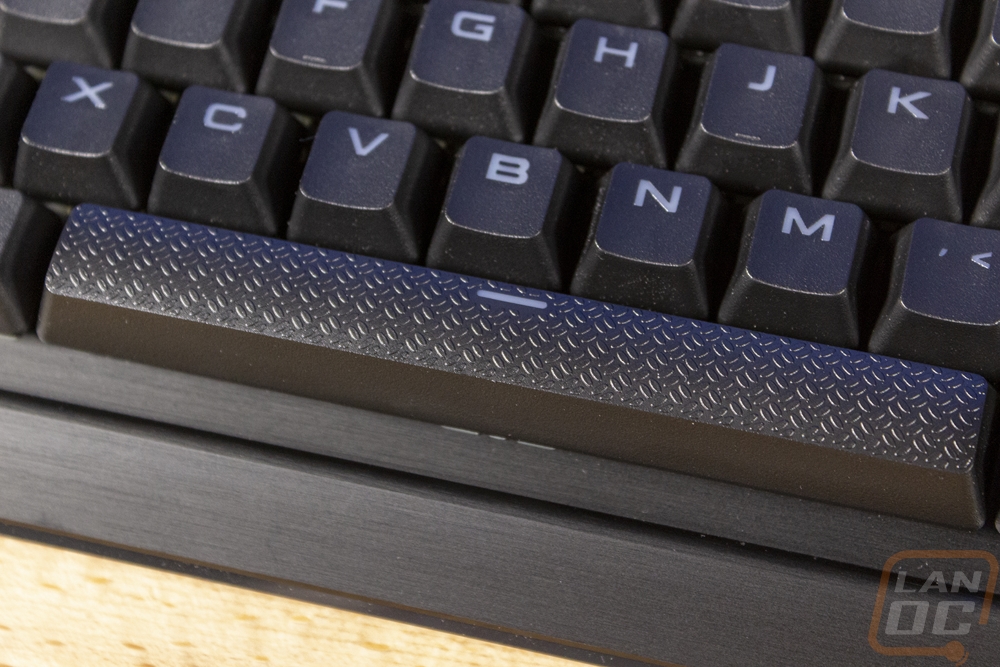 So the thick bezel up on top does house a few things. Starting on the left it has a three-button set which has a profile button on the left, a backlight brightness button in the middle, and a lock button on the right that locks your windows key to keep it from being bumped while in game. In the center, they have a glossy section with the Corsair logo including sails which is backlit like the rest of the board. Then just above the F12 key, there is a small pinhole indicator LED layout for the standard caps lock, scroll lock, and number lock indicators. It's interesting how small and subtle these are with the rest of the board being bright and big with everything else. The Status LEDs are normally up over the number pad but for the K95 keyboards, they are moved over to make room for the media controls. You get a nice metal scroll wheel for volume control which has a mute button next to it. Under that the media controls cover play/pause, stop, and forward and back buttons. 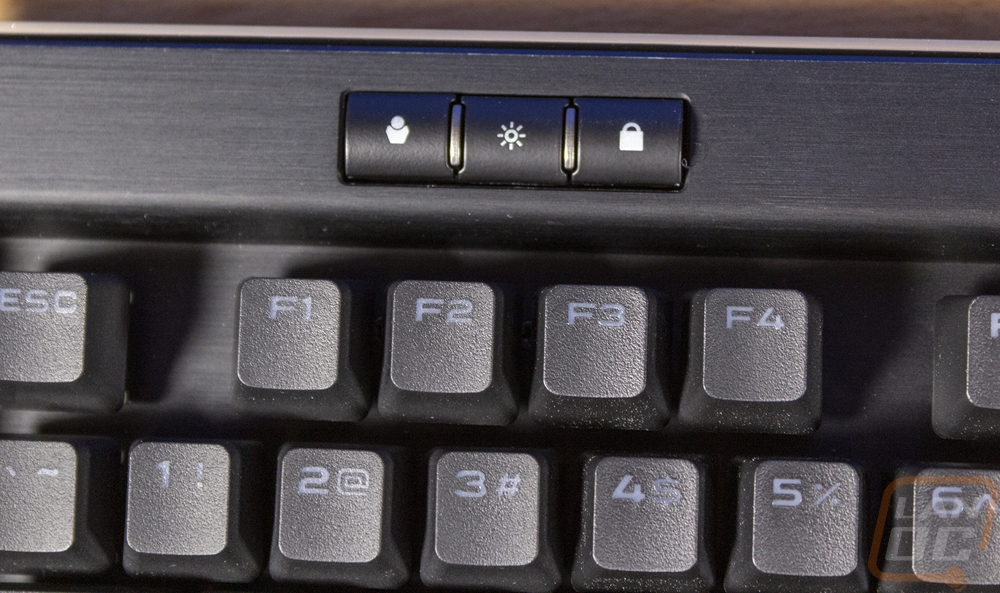 The other big difference between the K95 and a standard full-size keyboard are the gaming keys over on the left. These aren’t a new addition with the XT but Corsair did find a new way to use them. They come with a grey topped heavy textured keycap but the board also comes with a second set with a blue top that changes the key names from G keys to S keys for streaming keys. Sticking with Corsair’s purchase of Elgato, they have integrated the side buttons in with their stream deck software. I will mention it because it has been a while but normally I never use these macro keys, but the new streaming angle is an interesting take. I would personally prefer for them to be up above the number row but below the F keys for easier reach when gaming, I’m not sure why no one has ever done this. But now with the integration for streaming, up above the F keys could also work, which makes me have to wonder if Corsair will eventually slip in a few of the Stream Deck OLED screened keys into a keyboard. The angled shape to the G keys is interesting. They also have a flat profile when viewed from the side. Which by the way, the side profile gives us a great look at the no bezel design of the keyboard that allows dust and dirt to be blown right out the sides. 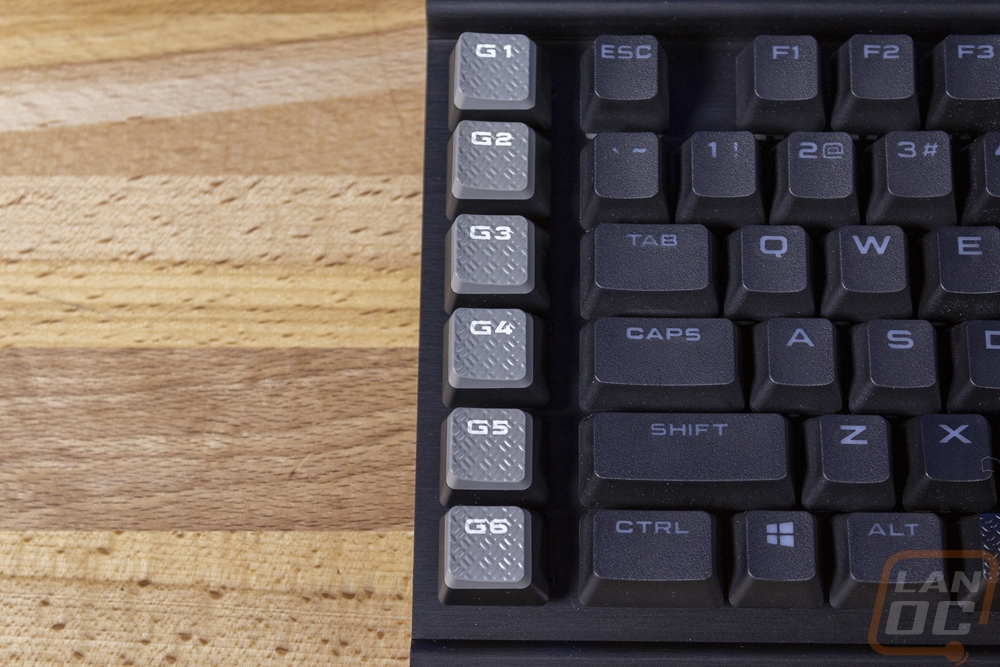 So the K95’s design includes an aluminum top plate which doubles as the backplate. The rest of the keyboard housing is plastic and it goes from thinner towards your wrist to thicker at the back to give a natural tilt even when not using the flip out feet. At the back, the cord comes out at the center and next to it there is one USB passthrough. Like the previous K95, the XT has the RGB diffuser along the back edge that also wraps around to the side for about an inch. This is thin but has addressable LEDs all the way around it to give a glow around the top. 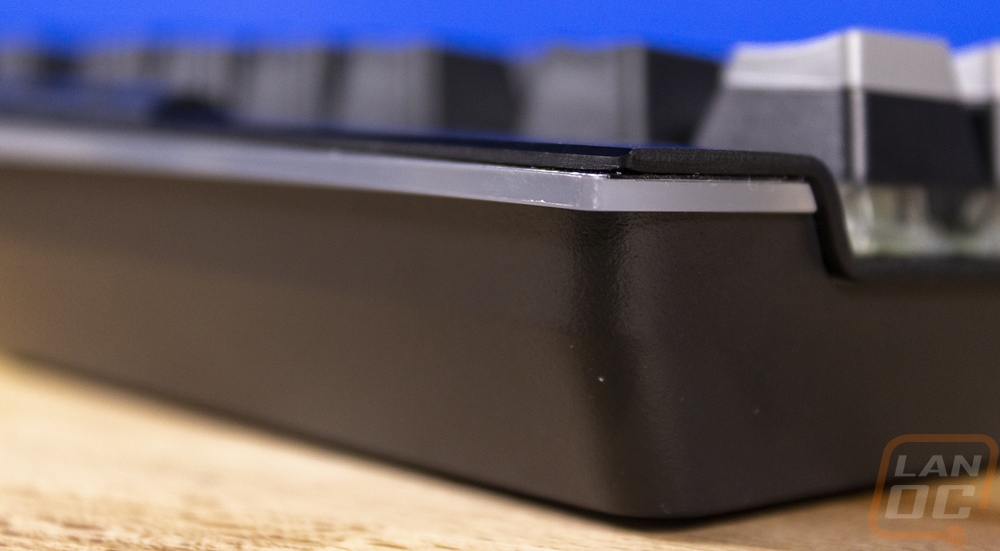 That thick cord that runs out of the center of the back is thick partially because the K95 does use two USB plugs. One of which powers and controls the keyboard and the other mostly handles USB passthrough for that USB port at the back of the board. That passthrough cord does seem to feed some extra power to the keyboard however, I noticed that the lighting turned on for a second when I plugged only that cord in. The cable comes with a heavy sleeving which then splits in half with the cords and it has the newer style Corsair plugs which are rounded with a knurled finish around the end. I love that the plugs do have a keyboard image and a passthrough image on them to show you which is which.

With the K96 RGB Platinum XT flipped over the casing does have an X shape carved in it for routing a headphone cable up under the keyboard. Then in each of the corners, there are large rubber feet. The rear feat also has a flip-out foot in the middle which also has rubber on the end to help keep the K95 in place. The X cable routing also pushes the one sticker on the back with all of the normal required information like regulatory logos up near the top. This also has your model information and a serial number should you need to RMA it as well. Then down on the bottom edge, you can see the wrist rest clip area. None of this is changed at all from the last K95 model.

Okay, so one of the big changes from the new XT model is the wrist rest itself. The previous K95 RGB Platinum had a plastic wrist rest with a flipable rubber pad on to the top with a slight texture (two textures depending on how you had it flipped). This time around they went with a much more traditional design which has a “Leatherette” finish with padding under it. This runs the length of the wrist rest and isn’t split in the middle like before. The fake leather does have small dents in it to get the same dotted look that one of the rubber designs had on the last K95. The wrist rest still attaches with plastic clips so you will want to be careful with it. It also adds three thin rubber feet to help with traction as well. It's interesting that from the bottom you can see the foam used for padding through the same windows that the previous K95 used to allow you to push up through to pop the rubber top off to flip it.

Here is a look at the K95 RGB Platinum XT with the wrist rests attached. Combined with the extra keys on the left and the thick top bezel this is a big keyboard, but it does look good with the new padded wrist rest. 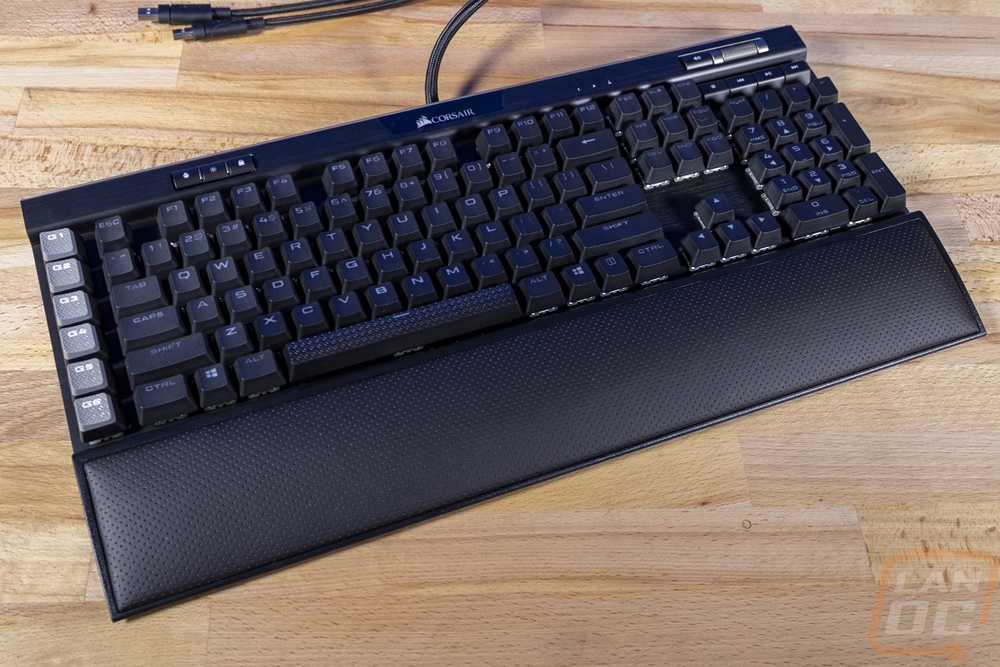 The other big hardware change was with the keycaps and frankly, this is the big change that got my attention. To most people, nothing will look changed, but Corsair went with a double shot PBT keycap design. This is significant in a few ways. For one PBT plastic is a much better material for keycaps because it doesn’t wear the same as ABS keycaps do. The reason you don’t see it used often is because of the big move to backlit keyboards with LED lighting. Normal ABS keycaps are just made in a translucent white and then they paint the keycaps. You can’t do that with PBT without losing the durability. So you have to double shoot them meaning you shoot two different plastic colors inside when making each key. This also means you have to have a mold for each and every key, not just a few designs that you laser etch the legend on to later. It is a lot more expensive. But double shot means that even if the key does wear, the color goes down into the plastic, as does the legend so they last a lot longer and will never wear through. PBT adds to that, meaning it is even harder to wear. You may have had keycaps that get a glossy finish, this is the wear I’m talking about. PBT also has more of a texture to it, you can see it in the picture below. Corsair also molded these thicker which in addition to making them better quality also changes the key sound. Basically, these are enthusiast-level keycaps which is good because of the non-standard bottom row which makes it nearly impossible to replace the keycaps. 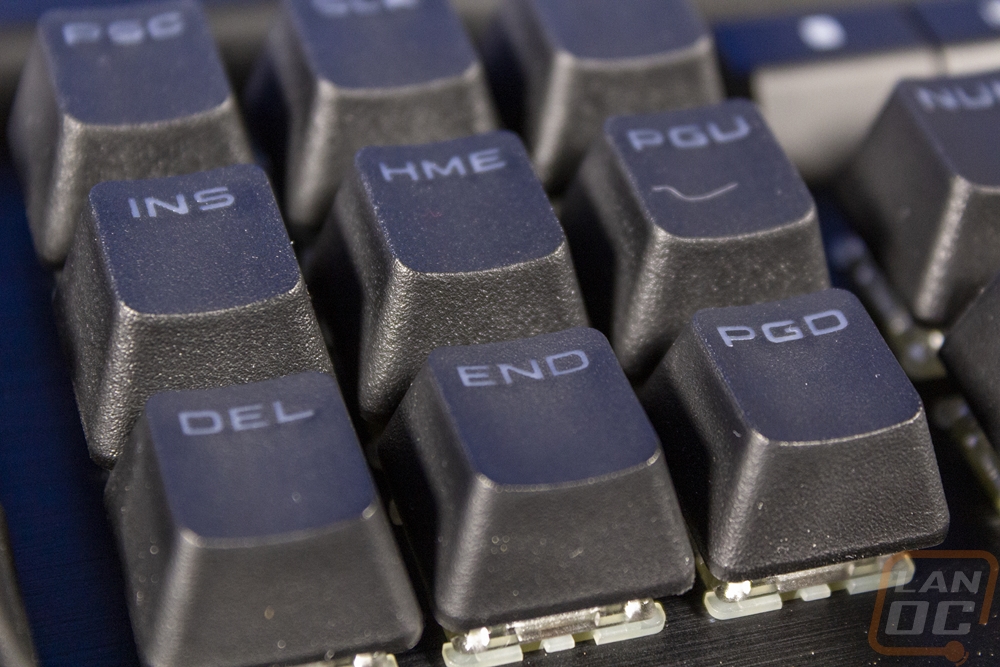 Up under the keycaps the K95 RGB Platinum XT has the same genuine Cherry MX switches that previous K95’s have had. For switches this board is available with three, you can get the MX Speed which is what we have here with the grey stem. There is also a blue and brown which give you a tactile and a clicky option as well. It is interesting that they dropped red all together for the silver speed switch. Both are linear, but the speed switch has a shorter actuation point which in the past I have found a little harder to type on but faster in gaming. I pulled one of the wider keys off as well to check the stabilizer type and Corsair is sticking with the Cherry theme with Cherry’s hidden stabilizer design. Ironically these are also the easiest to swap out keys on because you don’t have to fight with the stabilizer bars. 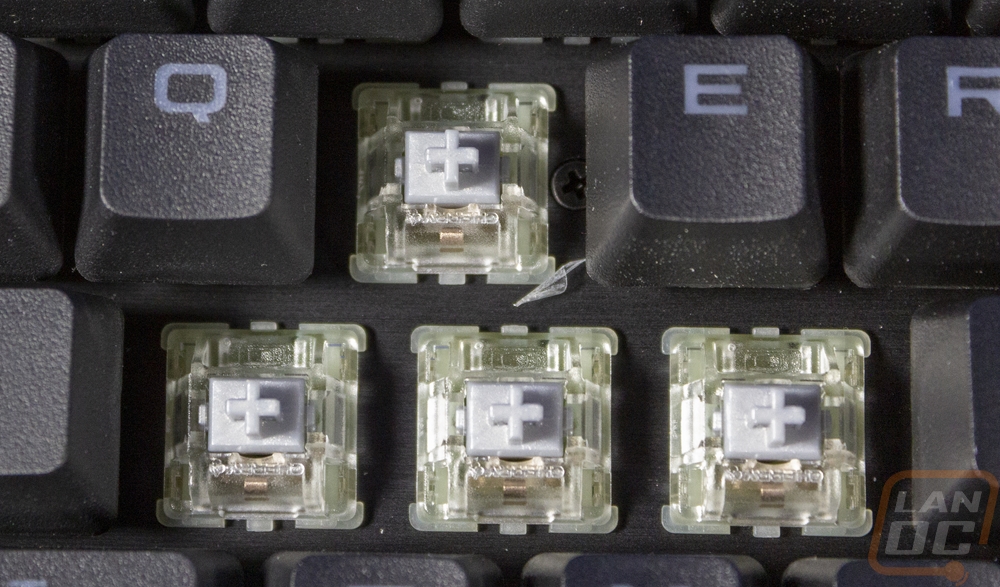 We have 815 guests and one member online