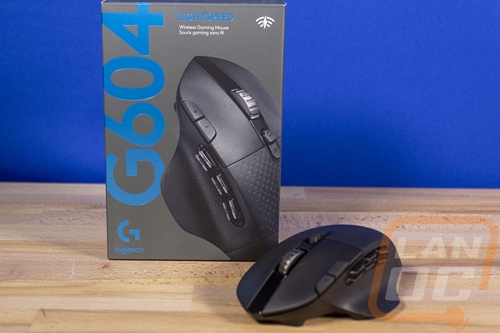 The G602/G603/G604 progression is a very weird one. The G604 actually pulls a little from both designs and frankly other than being a battery-powered wireless mouse the G603 and G602 don’t share too much in design. The shape of the G604 has some of the aggressive design of the G602 including down between the triggers where it comes to a point but they dropped a lot of the weird angular design of the G602 for a smooth design more like the G603. The design is without a doubt more like the G602 though. That said I see a lot of the MX Masters mice in the design as well. 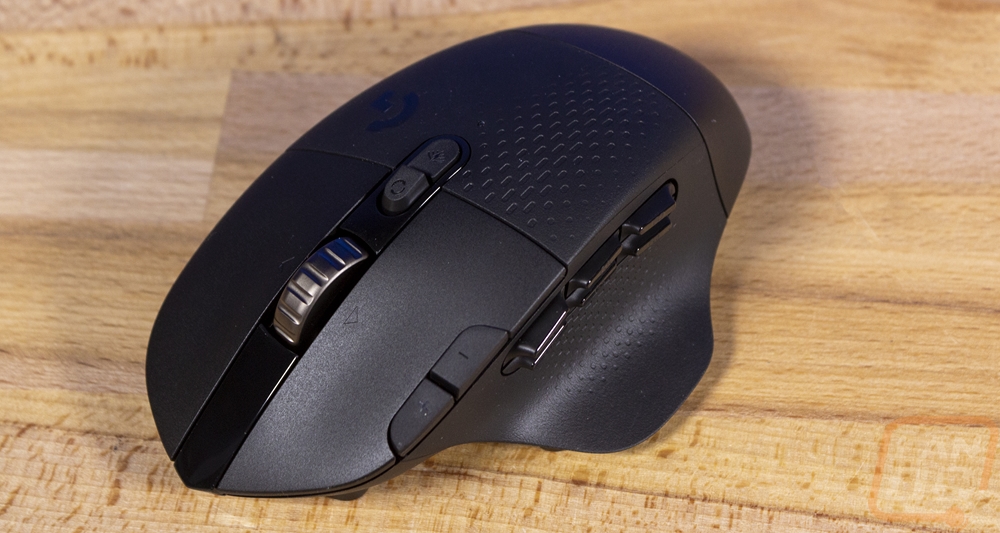 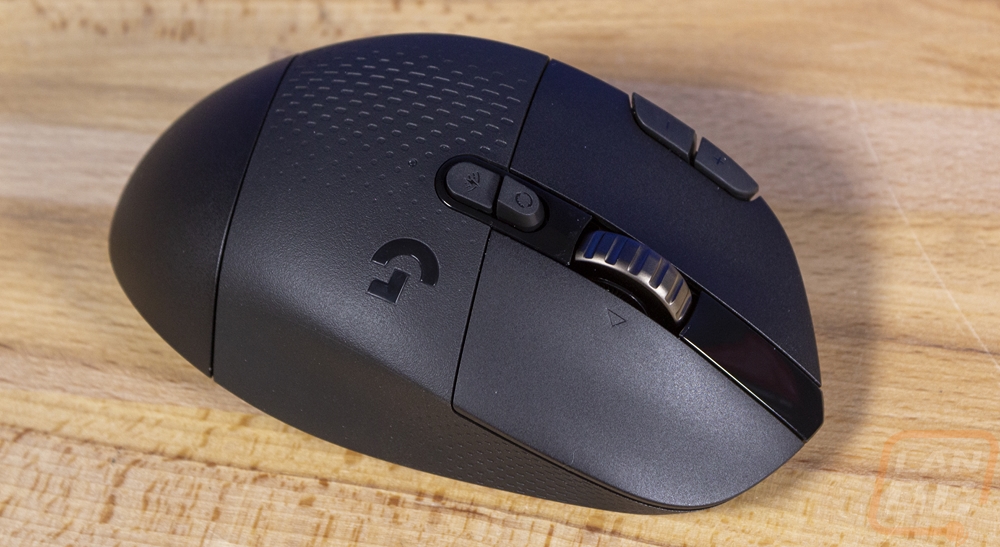 The right side of the G604 has a nice sized overhang for lifting with your pinky and if that wasn’t enough the front half also has a texture to it and the side is also coated in a textured rubber. That coating wraps up over the center of the mouse while not on the triggers or the door at the back of the mouse and is on the left side as well. There is an overhang on this side as well but it is less pronounced and it is completely unneeded because the side buttons themselves are the real overhang because the shape puts your thumb right up under them where the extra texture is molded into the rubber finish. The left side also has a large wing that curves out up under your thumb which is going to be a favorite for some people and hated by others. Especially if you are coming from the G603 which didn’t have that at all and had a much more traditional shape.

Getting a look at the shape from the rear you can really see the contorted shape that peaks on the far left and slowly ramps down. This view also shows the large overhand on the right side and just how much the left buttons do it as well. That contour is a lot more pronounced on the front where the left trigger (right in the photo) sits much higher than the left. You can also see the left side wing here as well.

So the G600 was Logitech’s MMO mouse and they carried the multi-button feature over to the G602 as well but they completely changed the layout. The G604 sticks very close to the G602 layout with six protruding buttons on the side for thumb access. They are all closer to the same size and shape this time for easier use. They also each have a label for easier programming as well. Also on the G604, the left trigger has two more buttons on the left edge with a plus and minus logo on them. By default these are set to DPI. This is a design feature I first saw years ago on the original Razer Mamba and it is a great way to slip in two more buttons and have them be easy to reach and out of the way at the same time. Because of the long length of the triggers the two DPI buttons are set back slightly just to the left of where you would put your index finger. Both can be reprogramed in the software as well along with the six G buttons on the thumb side giving the G604 that high button count for MMO use. 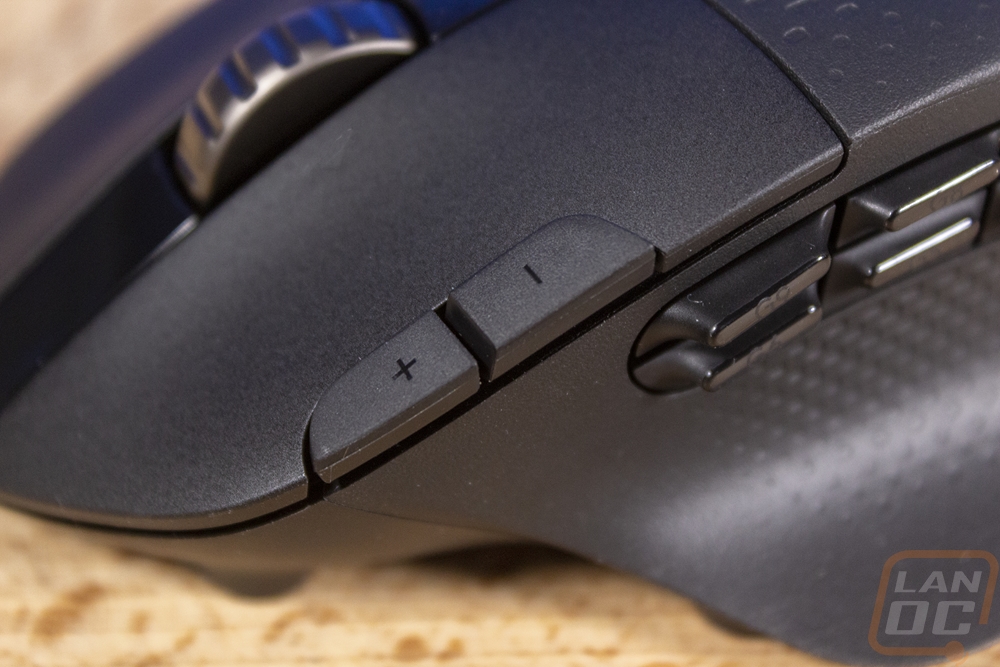 Remember me mentioning the MX Master hints earlier. When I saw the bottom of the G604 it was all I could think of. For gliders, the G604 has four V-shaped pads that all float away from the bottom shape of the mouse. In fact around the edges the whole mouse curves up for what I guess Logitech was going for is a floating look. Given the size of this mouse I was honestly hoping for larger gliders for better durability. There is a ring glider around the mostly center-mounted sensor. I have to mention mostly because you can see it is offset to the side slightly to make room for the power switch which seems like a silly mistake given how open the rest of the bottom is. Anyhow as the packaging hinted the biggest upgrade for the G604 is it has the same HERO 16K sensor that Logitech has been giving their entire lineup. For this specific mouse it is especially important. It does help with the weight a little, double A batteries are heavy and a lot less weight-efficient than a rechargeable pack so the soldered on sensor helps there. But its give improvement is in battery life on a mouse that can’t be recharged. So for reference, the G602 could last 250 hours in performance (HI) mode and 9 months in LO mode. The G603 increased things to 500 hours in HI mode and 18 in LO mode but they both use two AA batteries for those ratings. The G604 does 240 in Lightspeed mode and then 5.5 with Bluetooth. Dropping the HI and LO modes that changed wireless input lag and going with the full Lightspeed performance alongside Bluetooth with its dual wireless modes which BTW is yet another MX Master feature. 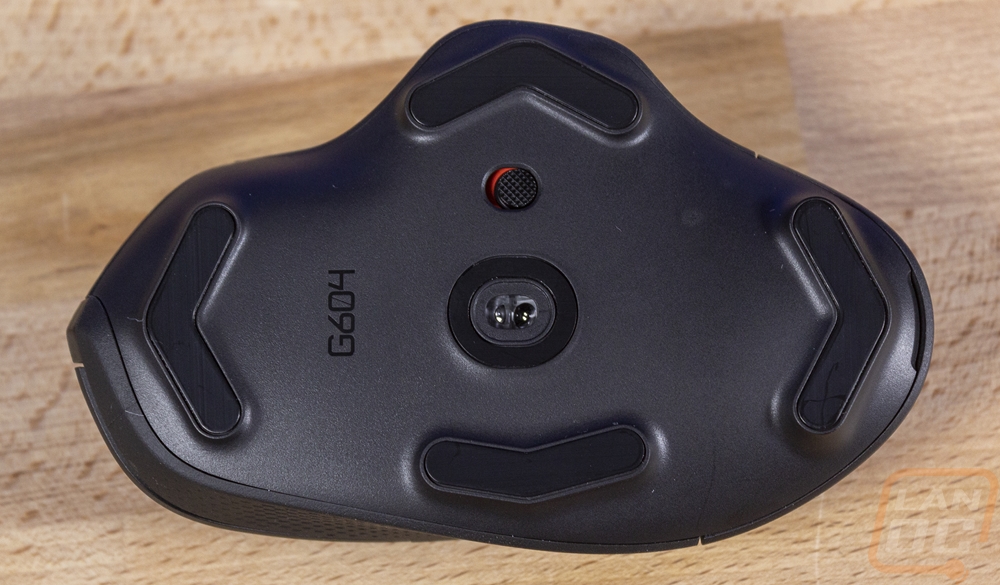 Installing the included battery requires pulling the butt of the mouse off. it is where the Lightspeed wireless dongle was hidden as well. Given the dual wireless modes, it is great that you can hide the dongle in here when not using it. Then the battery sits at an angle to avoid getting in the way of the sensor and everything inside. It is easy to swap out and to drop the magnetic butt back on the mouse for little downtime. The dongle itself is as standard as it gets from Logitech with just a small exposed area and the USB plug. It does have the model name on it should you lose it and mix it up with any other devices. 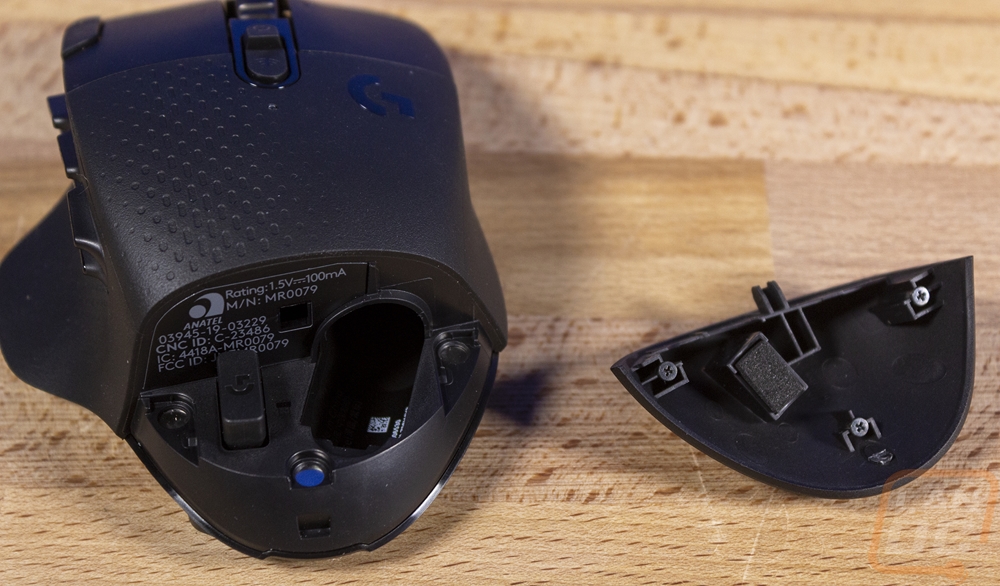 Up on the top of the G604, there are a few things going on. For starters, I was REALLY shocked to see that Logitech brought back the metal scroll wheel that the G502 had. I love the design, it looks amazing, and in my experience it is the only scroll wheel design that doesn’t get nasty from dirt and skin. But given that none of the previous mise had it and none of their new mice have it including the new G502 Wireless itself. The scroll wheel has side buttons in addition to the normal one at the bottom of the wheel and I’m guessing they didn’t want to redesign a new gaming scroll wheel with the side buttons they wanted to stack even more programmability to the G604. Behind that the tall button is a manual unlock that turns the click off on the wheel for ultra-fast and long scrolls. Logitech mentioned this is the best fidget spinner on my call with them about the 604 and I can completely agree. Behind that the button has a wireless logo on it, this is for switching between the Lightspeed dongle and Bluetooth. It is also for setting up Bluetooth. The LED behind that also helps with that and funny enough that is the only LED on the entire mouse.

The G604 came in at 136 grams which is actually really heavy for a modern mouse. This was without the wireless dongle but it did have the AA battery in it. The battery and all of the casing that holds the battery in is a lot heavier than a rechargeable. The G604 also doesn’t take advantage of some of Logitech’s new tech for lowering mouse weight like the endoskeleton. Going with a traditional internal structure and it shows. Both the G602 and G603 were actually lighter weight when running just one battery but to get similar performance to the G604 they need both batteries and the G6604 ends up being about 20 grams less than the G602 and the same as the G603. 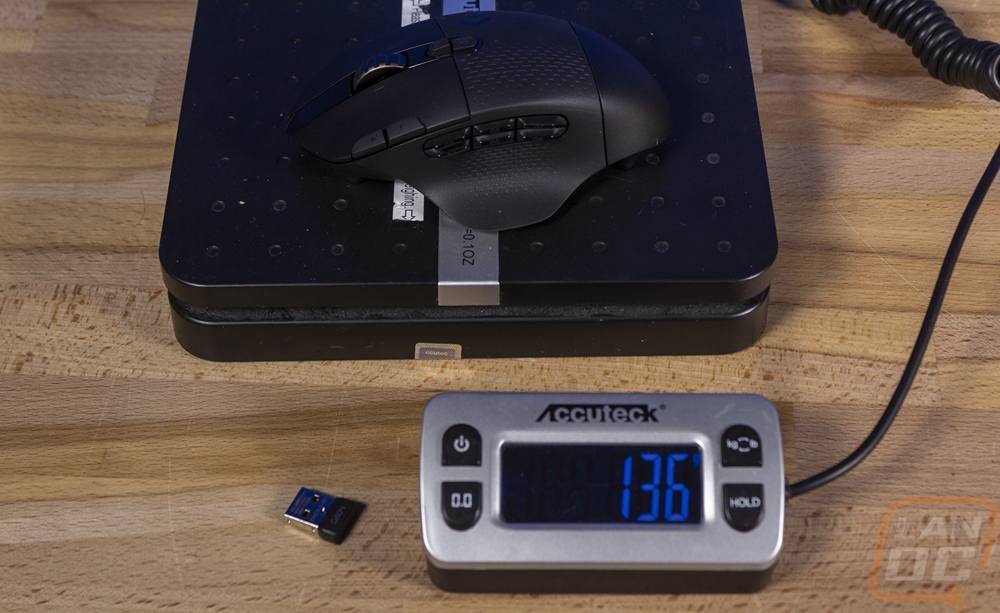 We have 942 guests and one member online