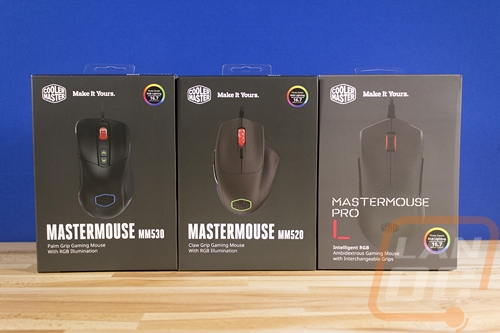 So after spending the last month and a half messing around with both of Cooler Masters new mice as well as the MasterMouse Pro L I had a lot to say about them good and bad. I love that on all three of the mice they went with the Pixart 3360 optical sensor and Omron switches. They all seem to have a really solid construction as well, even banging them around I didn’t have any weird noises and they don’t bend or flex. The MM520 brought me right back to using the Spawn mouse with its great shape for claw grips and I like the MasterMouse Pro L for its ambidextrous shape. The two new mice also have split triggers, something that people are looking for these days. The customization of the Pro L was interesting, though I ended up preferring the basic shape. I also like the new flexible cords on the MM520 and MM530.

Across all three mice, I felt like they should have attempted to cut down on the weight more. I understand why the Pro L with its three different replacement panels was a little heavy but why were the MM520 and MM530 heavy? I’m also not a fan of the new half backlit logo on the two new mice. The MM520 had a great shape but it didn’t really work for me long term, giving me cramps when trying to use it day to day. The MM530 could have been a nice compromise in shape but the rubber grips on both sides got greasy. I also didn’t like the side button placement on it very much and a small nitpick was that this is the only mouse of the three that didn’t have notches cut out to make it easy to replace the gliders in the future.

As for the MasterMouse Pro L, this was the mouse that I thought would be perfect for me and it was really close. The main issue I has was with the finish of the mouse. It was really slippery and when combined with the peak of the mouse being too far forward for me the mouse would like to slip forward out of my hand when I was holding it. The DPI button on the bottom was a little weird as well and I think if they are going to include replacement panels like they did you should get some sort of bag or container to keep them in so you don’t lose them.

Overall none of the mice ended up being that silver bullet for me, but most of my complaints were specific to the shape relative to my hands. Given the popularity of the Spawn mouse in the past, I know a lot of people are going to love the MM520 with its good sensor, solid construction, and Omron switches. Same goes for the MM530, it has the same switches and sensor and is similar in shape to the extremely popular Rival. If you don’t mind the rubber grips on the side you are good to go. The MasterMouse Pro L is still a solid ambidextrous mouse though if Cooler Master looks at an updated version in the future a new finish would be good and dropping the customization and with it, the weight would be awesome.

The best part though is that Cooler Master has a variety of shapes and sizes in their current lineup. They all have a great sensor and switches so you just have to focus on picking what fits you. The two new mice have an MSRP of $49.99 and the Pro L has an MSRP of $59.99 but is currently selling for the same price as the MM520 and MM530. That means all three mice aren’t going to break the bank. 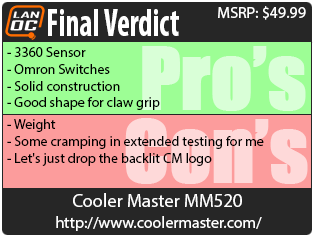 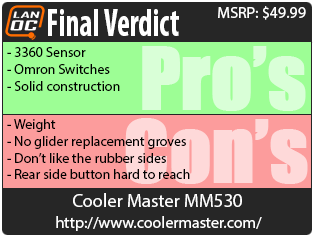 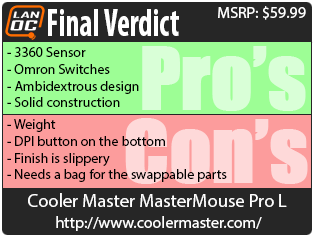 We have 1081 guests and one member online