Everyone pushes their CPU to the limits doing different things. For example, my personal rig is a 16 core monster but when it comes to clock speed it leaves something to be desired with a base clock of 2.0GHz. Although I do game, I also spend a lot of time multitasking to an extreme and at times video editing and running various VM’s as well.  You might push your CPU the most when gaming, ripping movies from your Blu-Rays, or photoshopping your latest Meme to get Karma on Reddit. Because of that we have put the i7-4770 through our entire test suite that touches on various ways you might use your PC. I have split things up slightly to help pinpoint what might interest you the most. 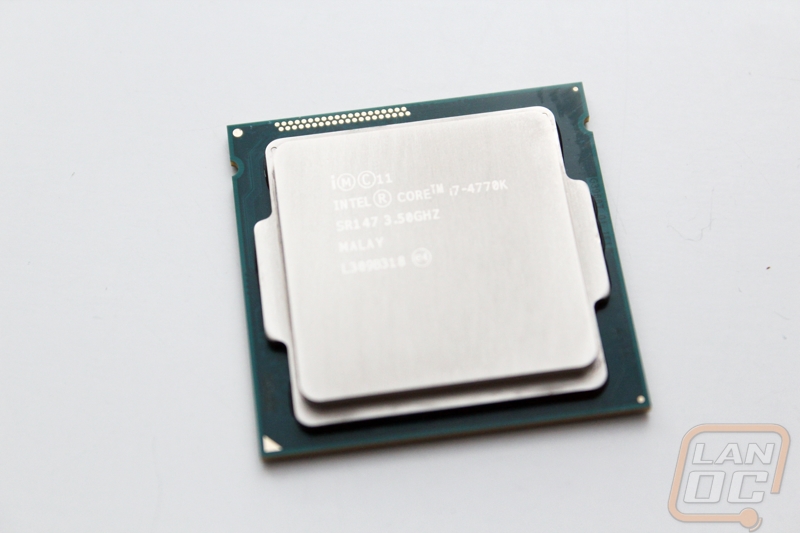 Our 3D specific benchmarks all take advantage of the two GTX 580’s that we use in SLI. Our On Board specific testing is later in this review. This shows what kind of performance improvement you can expect to see without changing your video card or cards out. Starting with the in game performance numbers It is really interesting to see the performance jumps we saw going from Sandy Bridge to Ivy and Sandy Bridge E. Going to Haswell the difference in Battlefield Bad Company 2 was null but we did see a nice bump in Dirt 3. In game performance improvements will be limited more to games that require a lot of CPU like Civilization V. For most games on the market you will be limited more by your video card with only slight improvements from CPU to CPU, unless you running something extremely slow of course. A good reference to this would be our i3, i5, and i7 write-up from a while back. The one exception to this comes into play with the 2011 socket CPU’s, they have more PCI Express lanes available and this is especially important when you are looking at running multiple GPU’s.

When taking a look at our results from 3DMark 11 and Vantage we ignore the GPU score and the overall and focus on the CPU and PhysX scores. These are CPU specific and are a much better representation of the performance from CPU to CPU. It is very interesting to see the difference in the two tests. The Vantage results favor more cores over overall compute power like the 3DMark 11 scores. This is why we see the 980X up higher in Vantage. 3DMark 11 is a little more accurate to what you should expect day to day as most programs are still struggling to really take advantage of all of the cores on 6+ core CPU’s. The 3960 still dominates though because of its additional memory bandwidth as well as extra cores. The difference between the 3770K and 4770K is considerable with the i7-3820 sitting in the middle due to its extra memory bandwidth. 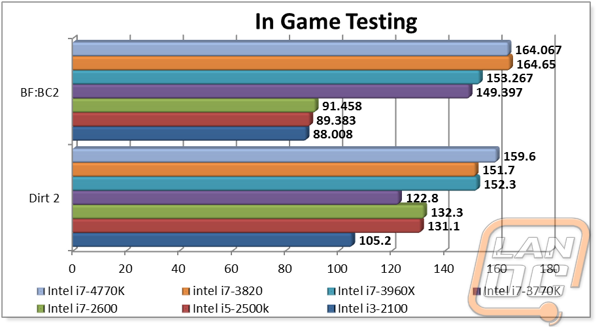 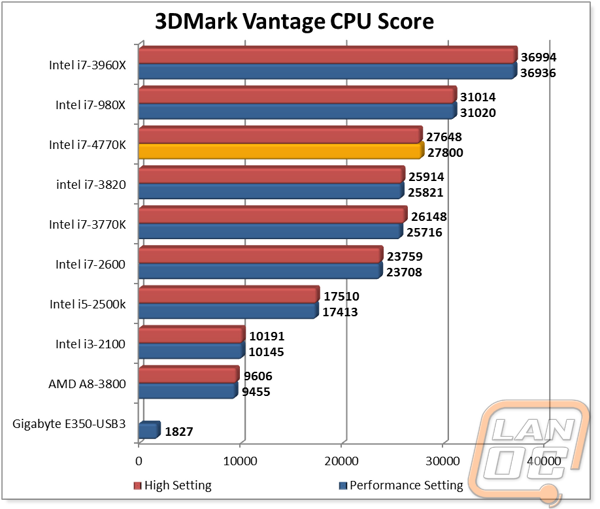 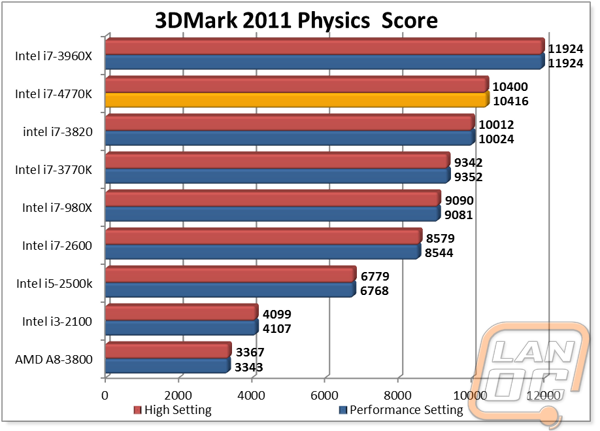 Various Specialty Benchmarks doesn’t really describe this section the best, but basically here we have all of the benchmarks that don’t fall into the other groups. Most of these focus on compute power from different angles. Here we will get a better idea of how the 4770K compares to everything else in things like encoding, math, ect. 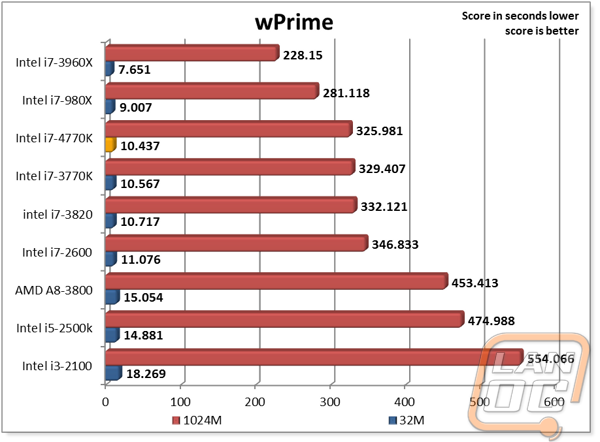 Starting with one of the most basic benchmarks we have wPrime. This is a timed benchmark for prime number calculations. It does favor the additional cores of the 980X and 3960X for good reason really. When it comes to a quad core CPU though, the 4770K pulls ahead of the 3770K slightly and is the top dog in our charts as far as quad cores go.  Remember that a lower score is better on this one as well. 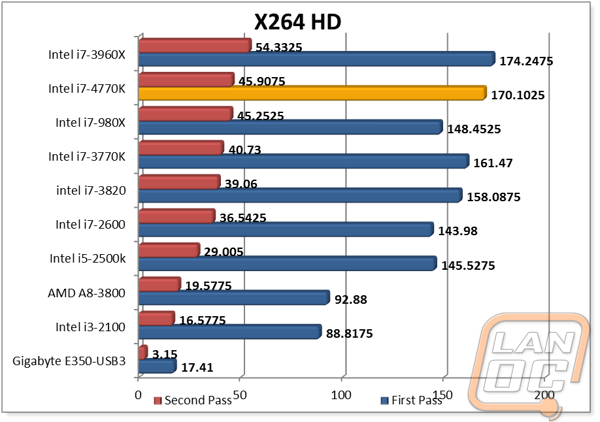 X264 HD Benchmark is an encoding benchmark that helps point you in the right direction for what CPU’s to look at for ripping your HD movies. The 4770K really pulled ahead of the 3770K and got very close to the 3960X. This is impressive considering its two extra cores and additional memory bandwidth. 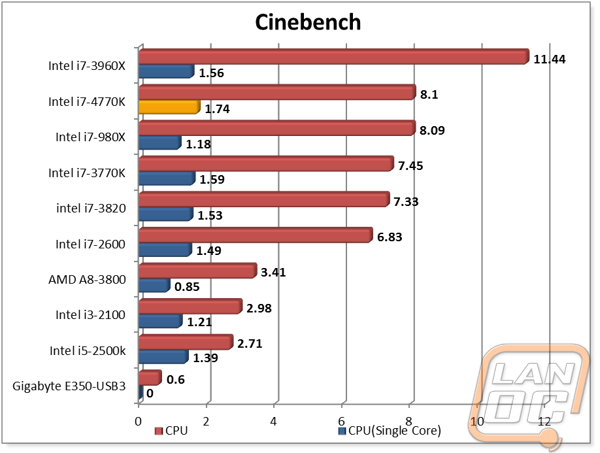 Cinebench has to be my favorite CPU benchmark simply because it runs through the test using all of the cores and then once again on a single core. This gives us the best idea of the performance to expect when a program actually takes advantage of all of your CPU cores as well as with single threaded applications. This also helps us see the improvements in architecture overall, even when comparing CPU’s with different core counts. In this case the 3960X still sits at the top by a good margin because of its two extra cores and memory bandwidth, but when it comes to single threaded performance the 4770K completely dominated everything on our charts. It’s also important to point out the difference between the 2600K and the 3770K was much smaller than the difference between the 3770K to the 4770 showing how big of a jump we are really experiencing.

Passmark hits a wide selection of results. Here we can see where the extra memory bandwidth of the Sandy Bridge E CPU’s helps like in String Sorting while in floating point math the 4770K stomped all over everything. As a whole though, the 4770K came in just below the much more expensive 3960X in most of the benchmarks. 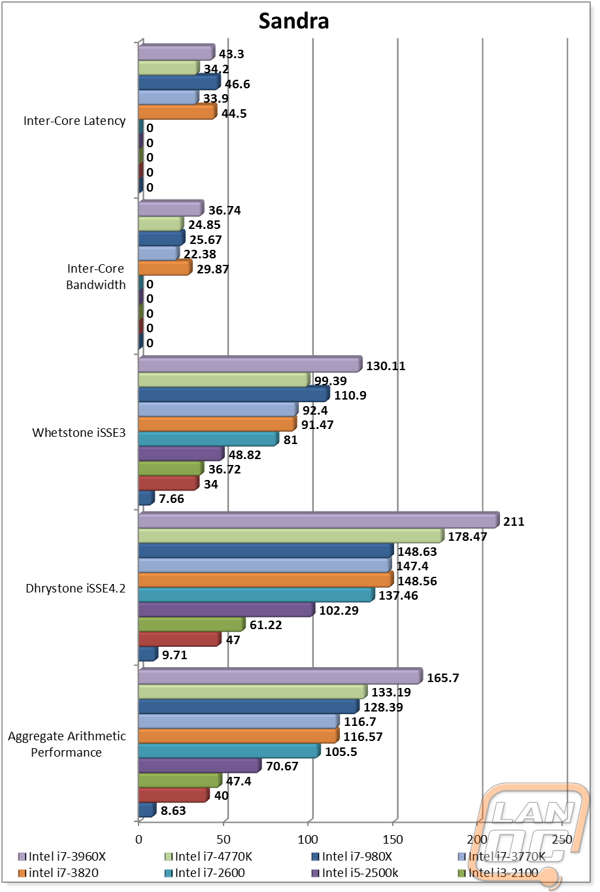 Sandra takes a similar approach as well, but with an even bigger variety of focused benchmarks. We use a couple of their arithmetic benchmarks that really show how far ahead of the other quad core CPU’s the 4770K is when it comes to arithmetic computation. Of course the monster 3860X still tops these benchmarks simply from a pure cores standpoint. 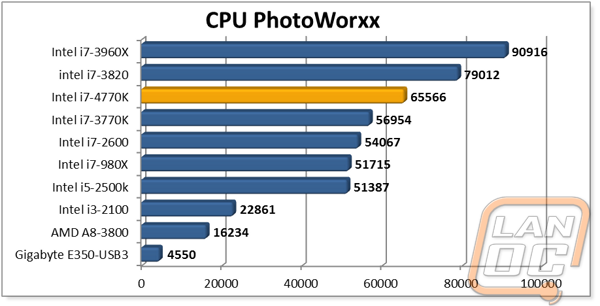 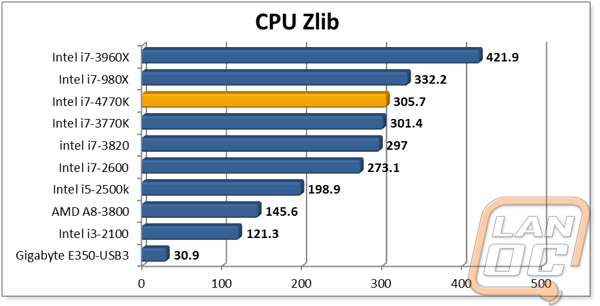 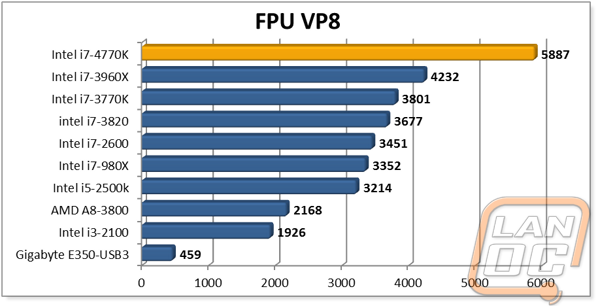 These last three results are from AIDA64 but we have put them in their own graphs to better show the performance differences. With the results from benchmark to benchmark varying so much, some of the results would be lost if we didn’t. As you can see though in CPU PhotoWorxx the memory bandwidth of the 3820 and 3960X pull them ahead, but it’s still impressive to see the difference between the 4770K and the 3770K. In the CPU Zlib benchmark the 6 core CPU’s pull ahead considerably and the difference between the quad core CPU’s is minimal at best. The last benchmark is FPU VP8 and here we see that overall single core performance helps pull the 4770K ahead a whopping 55% ahead of the 3770K!

Our last set of benchmarks generally show the overall performance of the complete package. In some cases things like additional memory bandwidth and more PCI Express lanes show up better in this kind of benchmark as they are more overall representations of what to expect in day to day situations. In the case of the 4770K though, it completely dominated every single test we tossed at it. These get me the most excited because overall benchmarks like PCMark and Wordbench show how a fast CPU like the 4770K will improve your productivity and give your PC a little quicker feeling. 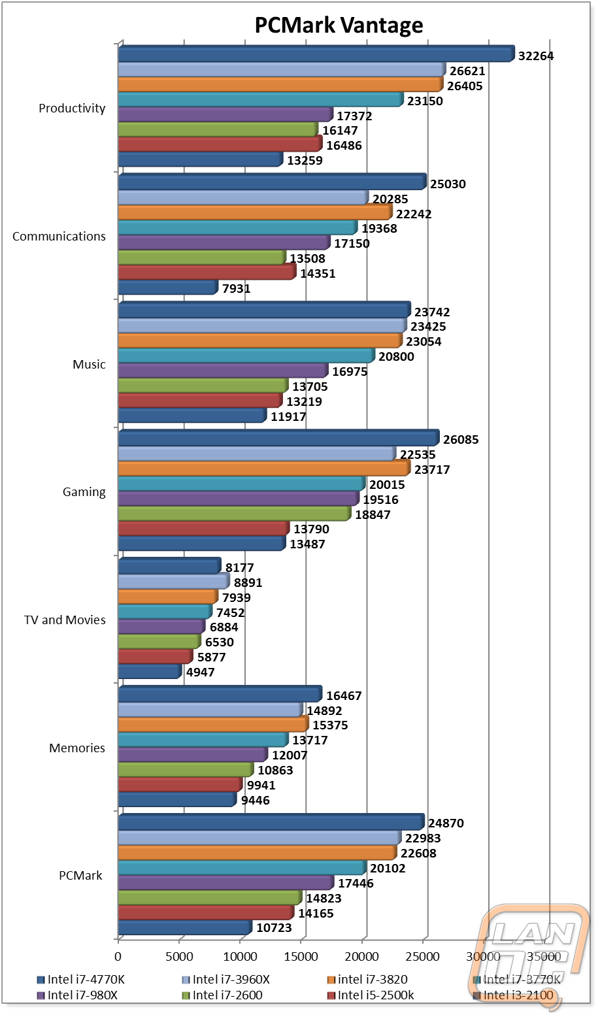 We have 2256 guests and one member online