A new CPU and socket mean new motherboards right? Well the first board we get to take a look at of course is the DZ87KLT-75K from Intel themselves. Some of you might remember an announcement this past January about Intel slowly dropping out of the motherboard market to focus on their CPU manufacturing as well as other projects like their NUC. That means that this is actually the last generation of boards from Intel, this DZ87KLT-75K may be rare someday right?!

Let’s start off first with a look at its packaging and what it comes with in the box before we dive into its details. The box itself still has a small skull up in the corner showing that this is what used to be considered an extreme board but they have now moved to a K at the end of the naming just like Intel’s CPUs to show its overclock ability. I love that they slipped a photo of the board on the front along with a little of the old Extreme styling with the dark/black theme. Around back the box has a better photo of the board that has lines going to each of the boards key features with a short description to help teach you a little about the DZ87KLT-75K. Along with that they have more information up the right side about things like the software that you can’t point out on the board itself. 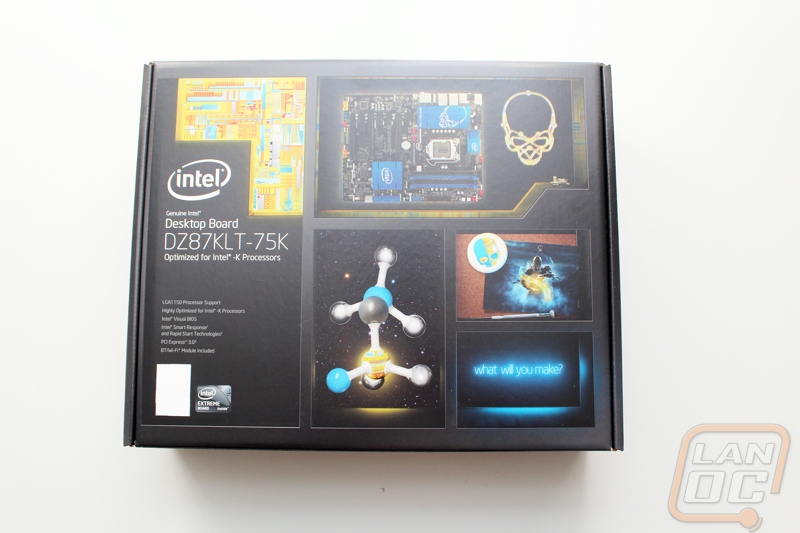 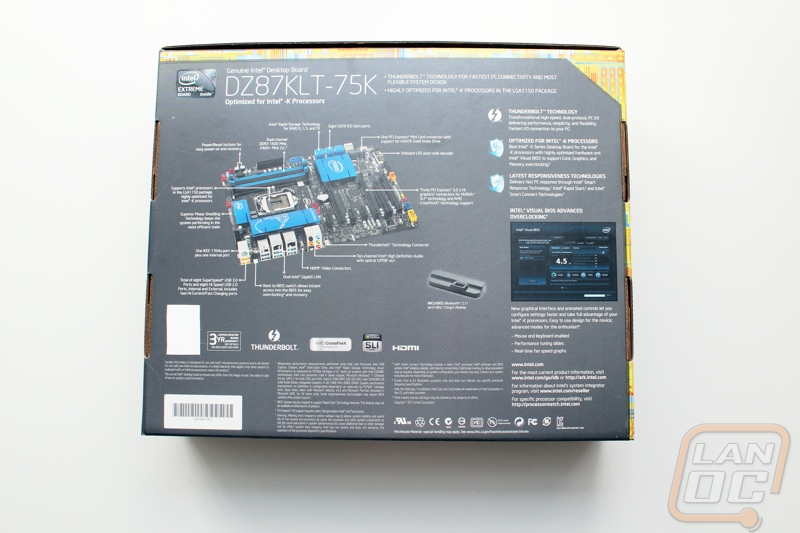 Inside up under the board we have just a couple accessories with the first being the Skull mouse pad that we have come to love with all of these boards. Along with it there is a single width SLI bridge, the integration guide, rear IO panel, and an internal USB based wireless/Bluetooth adapter. The rear I/O panel cover is color coded to help users know where to plug their devices in at and to match the color coding on the board itself. 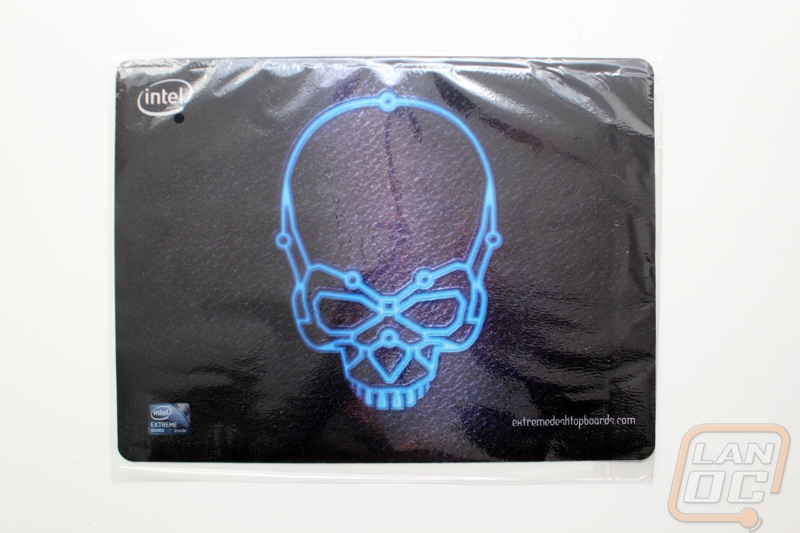 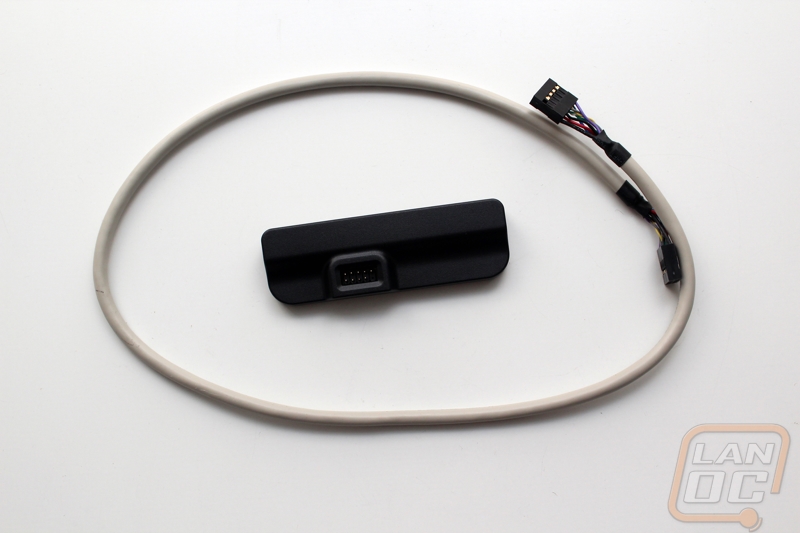 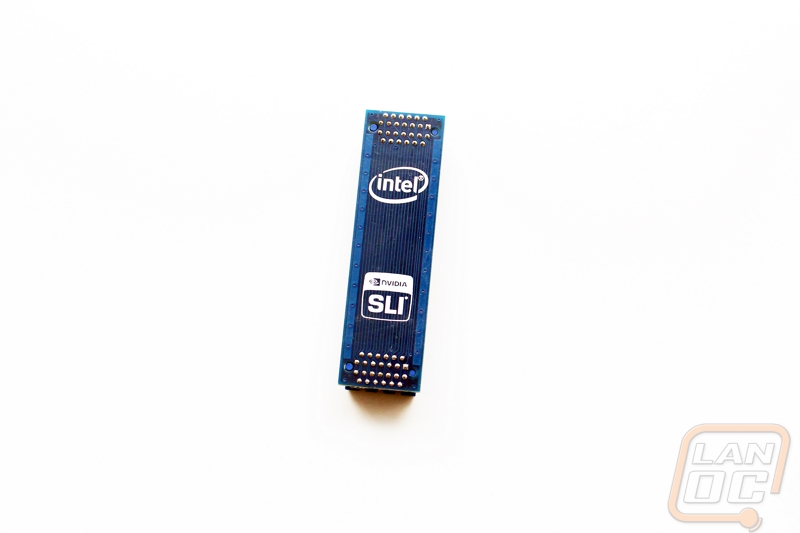 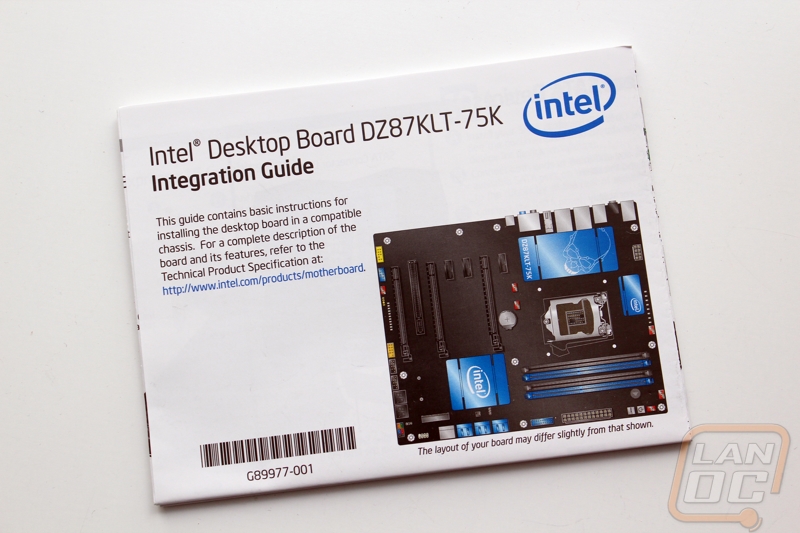 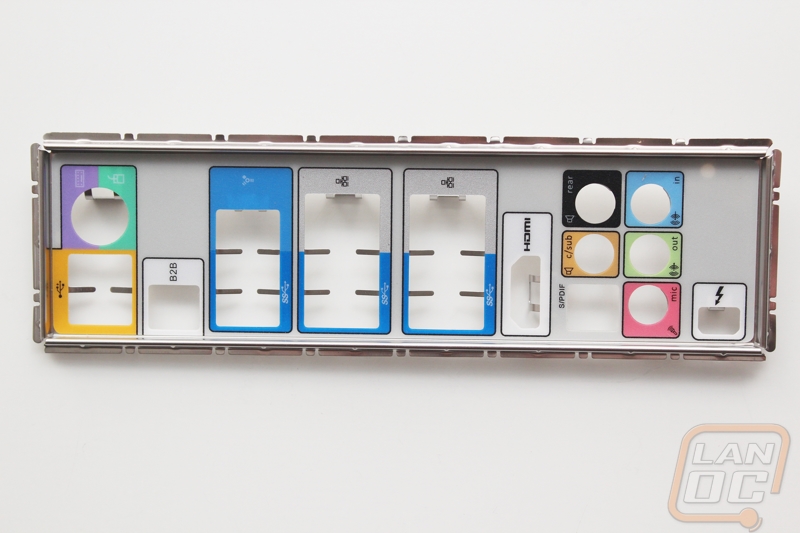 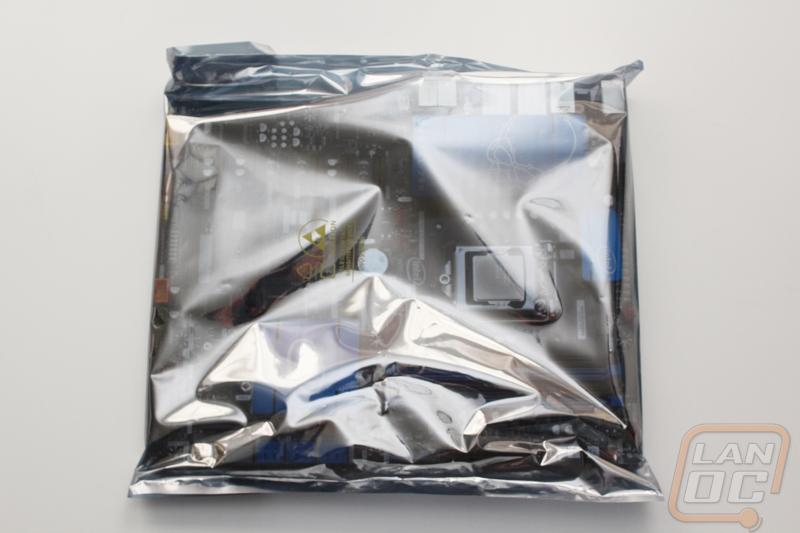 Intel stuck with their skull and blue theme but I have to say the overall look of the DZ87KLT-75K is MUCH better than the last few models, not that they were bad at all. The clean look of the bright blue heatsinks really catch your eye and draw you into the Intel logos or the Skull/DZ87KLT-75K branding. 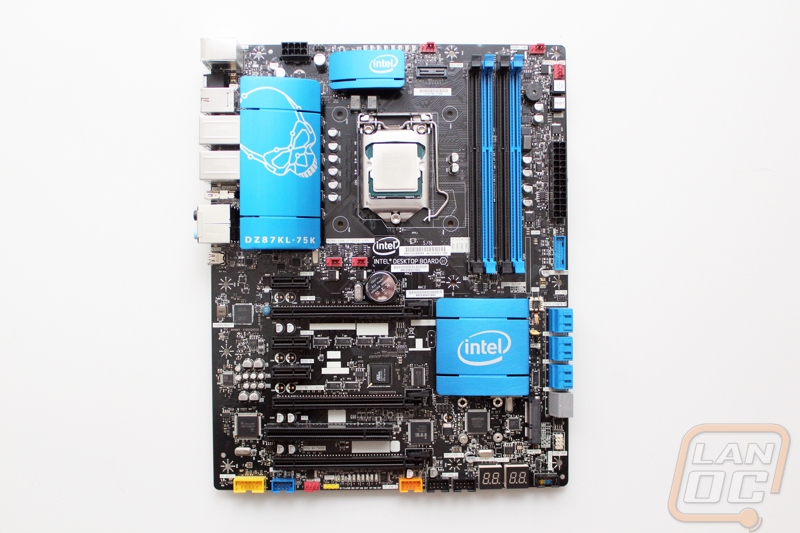 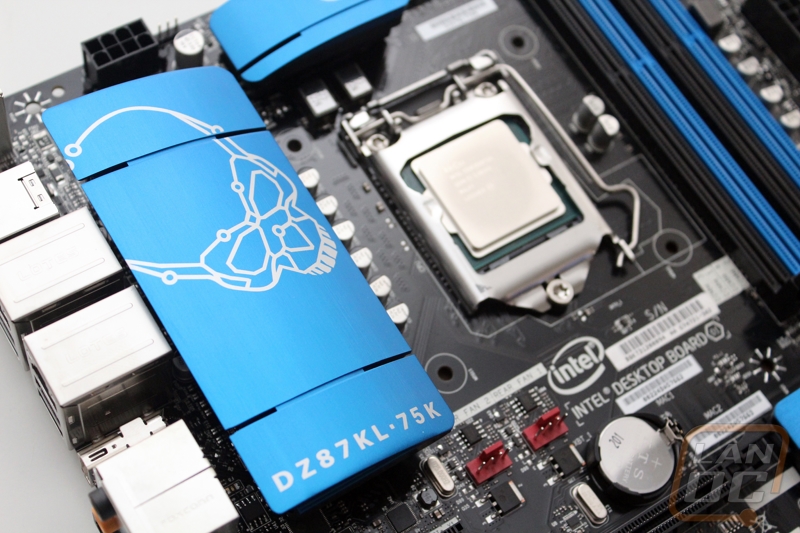 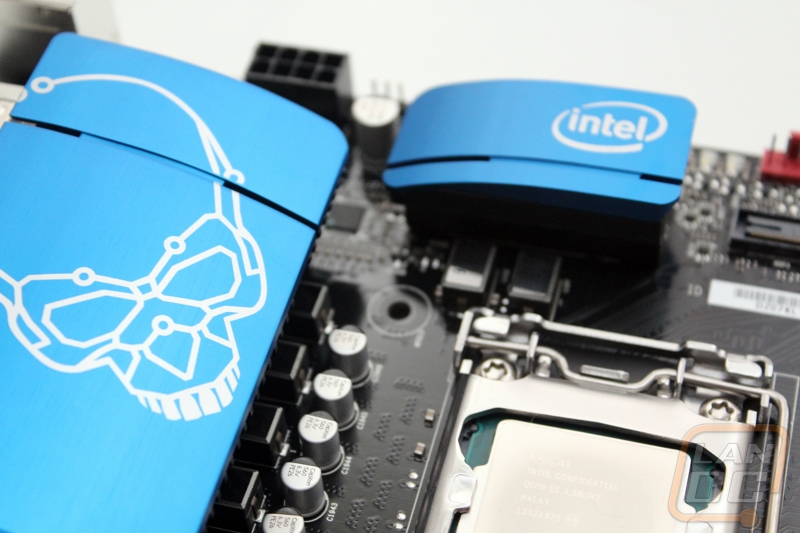 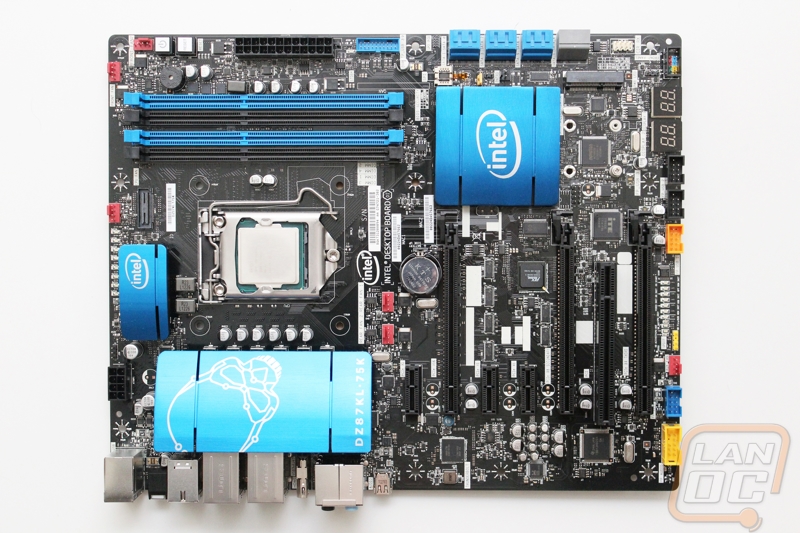 Starting up in the top left corner we have the single 8 pin CPU power connection as well as the four pin PWM CPU fan header. Intel made the fan header red in color to make it easier to spot on the dark board. 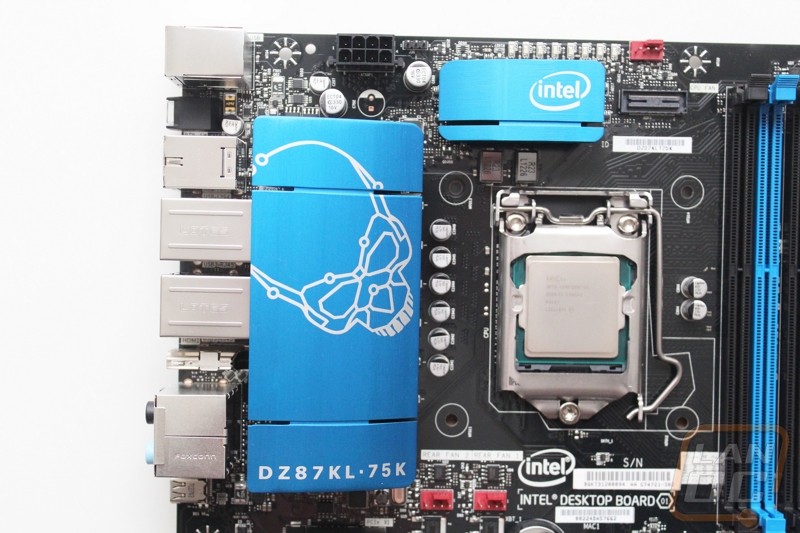 The top right corner of the DZ87KLT-75K has two more PWM fan headers, again in red. Here you will also see the small speaker just next to the DDR3 slots. Speaking of the ram slots we have four DIMM slots that are black and blue in color to match the rest of the board. In the top right corner we also have the 24 pin power connection and just above it two silver backlit buttons. These buttons are for power and reset, something you won’t need with this board in a case but if you ever need to hook everything up out of your case you will be very happy that you have the two buttons. Lastly tucked just under the power connection is a blue internal USB 3.0 header for cases that have USB 3.0 ports on the front (aka most new cases). 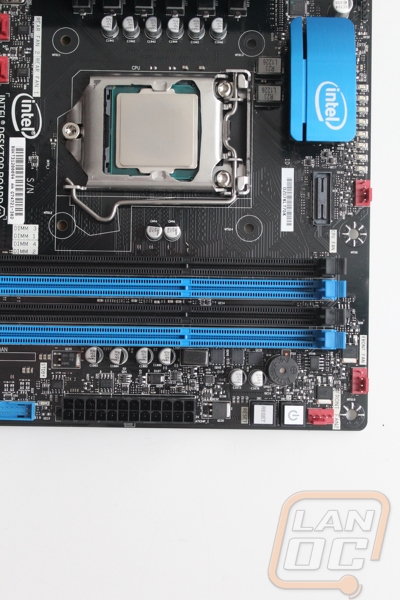 Just under the Chipset cooler, there is a full/half PCI Express Mini slot. In the farthest right corner there is a color coded front I/O connection header. The color coding may seem small but when hooking up those small connections it’s great to be able to see what you are plugging into easily. Next to that header are two LED diagnostic readouts, normally we would only see one; I’m not sure why they need more than one really. Lastly we have three USB 2.0 headers, two black and one yellow (orange to Intel). The yellow header is a high powered header for more power to charge your mobile devices. 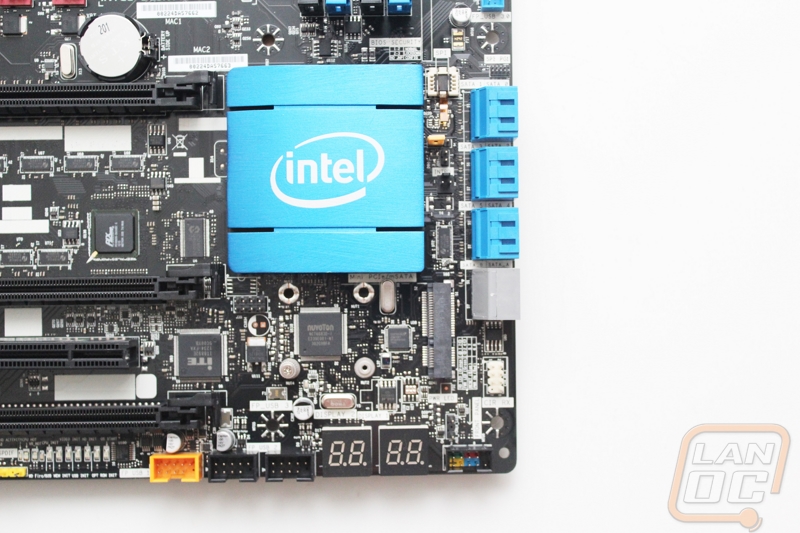 In the bottom left corner we have the front panel audio header on the far left, a 1394 Firewire header and yet another red four pin PWM fan header that makes a total of six. There is a small yellow SPDIF header and tucked up next to it is a row of various LED’s. Each LED has a tag above or below it, these will help pin point a problem if your PC isn’t completing is boot. The LED’s correspond to things like RAM, CPU, and whatnot and will help tell you where to look for the problem. 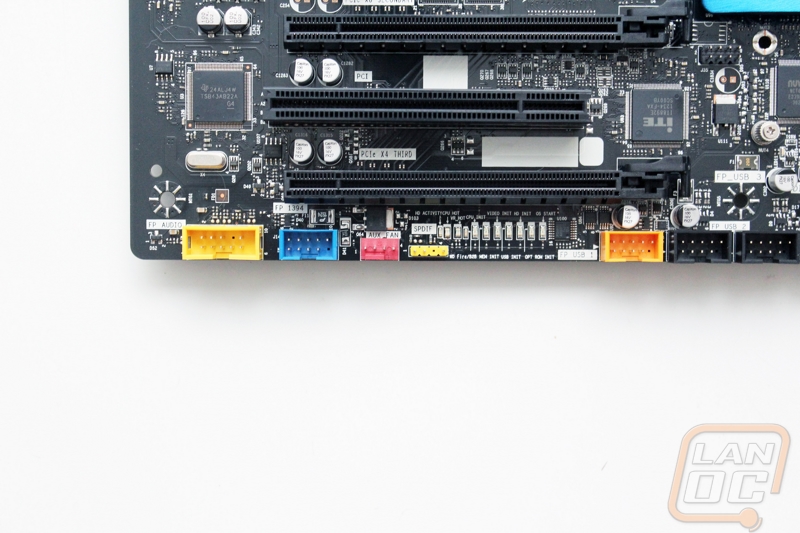 Here we have the PCI lot breakdown. You end up with three PCI Express x1 slots, one legacy PCI slot, and three PCI x16 slots. Electrically only the top slot is x16, and that is only if you aren’t running anything in the other x16 slots. If you are running two cards the top two x16 slots will run in x8 and the third x16 slot is limited electrically to x4. 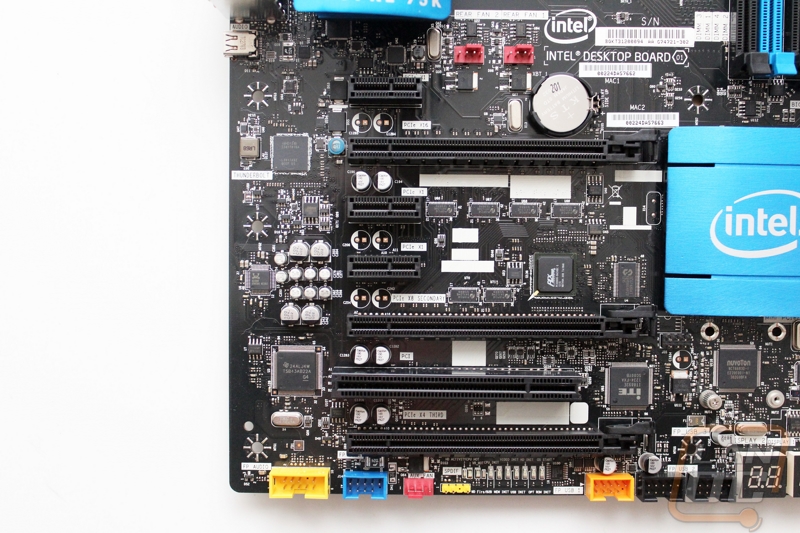 For SATA connections on the DZ87KLT-75K there are six SATA 3 6 Gb/s ports that are blue in color. These all run directly off the Z87 chipset. The two grey ports are also SATA 3 but these run through a Marvel 88SE9172 controller. It’s great to finally be rid of SATA 2 ports, it’s nice to not have to stress as much over what port to plug into. There are two more PWM fan headers just below of the CPU as well for case fans as well as a second CPU heatsink fan. While we are looking at this, I also wanted to point out that although the pin count is slightly different, there is no noticeable difference in the CPU hold down and socket. Your old Sandy Bridge and Ivy Bridge cooling solutions will still fit. 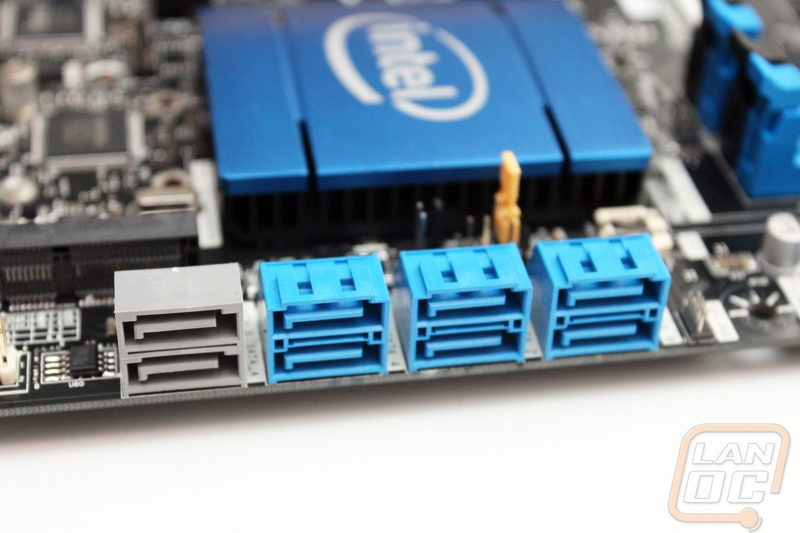 I mentioned the color coded connection on the back before, but here we have a good look at them finally. You get six USB 3.0 connections all running on the Z87 chipset as well as the two yellow (intel calls them orange) USB 2.0 plugs for your mouse and keyboard use. The two USB 2.0 ports also are high current charging ports as well. Speaking of those, you even get a rare legacy PS2 port; fans of some of the old clicky keyboard will especially like this. The DZ87KLT-75K also has two gigabit NIC’s and a firewire connection there in the middle. The HDMI port for the onboard is standing on its side and it is interesting to not see at least one DVI connection that will allow people to convert to VGA if needed. This is an enthusiast board so it shouldn’t affect many but it is an interesting observation. Over on the right side you have your standard audio connections and then down on the bottom a thunderbolt port! 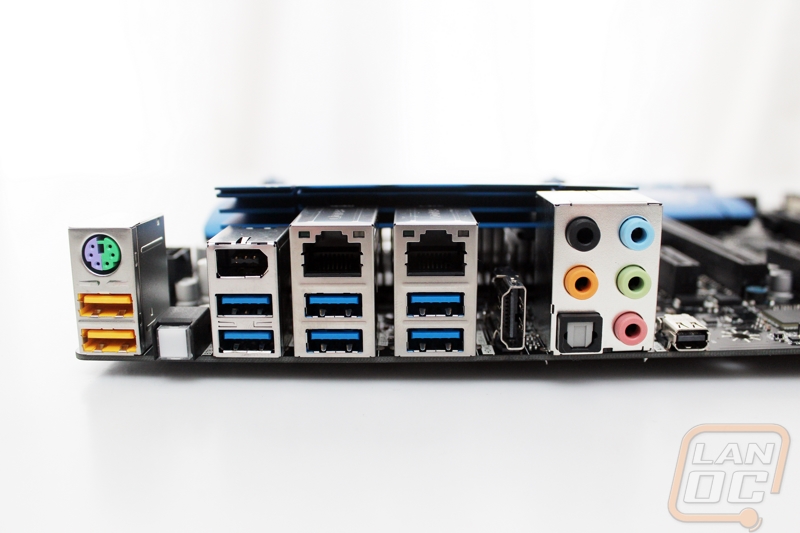 Flipped over we can better see the all black PCB on the DZ87KLT-75K. It’s crazy that even Intel gets that enthusiasts what this, but we still see boards here and there that don’t have PCB’s that can blend into tricked out builds. 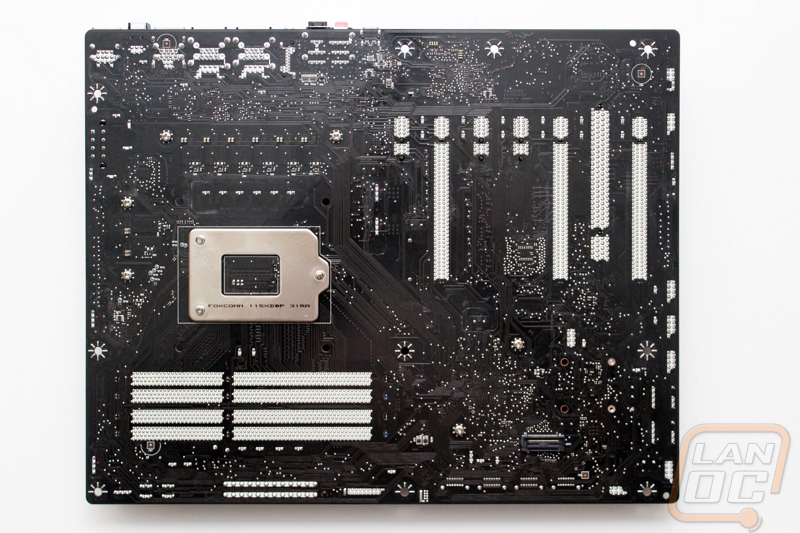 For those who are wondering, here is a full DZ87KLT-75K diagram to show how everything breaks down. 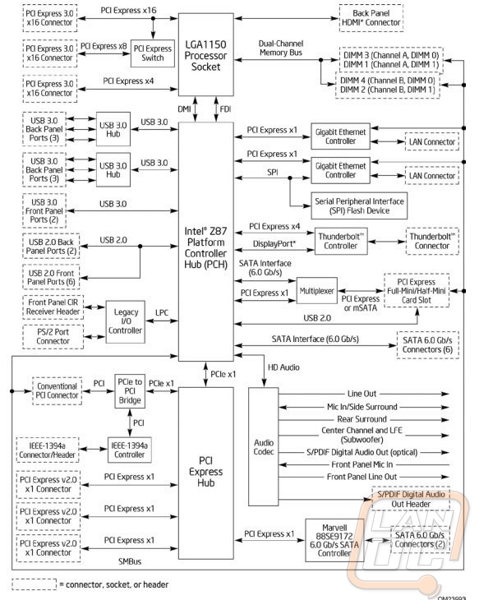