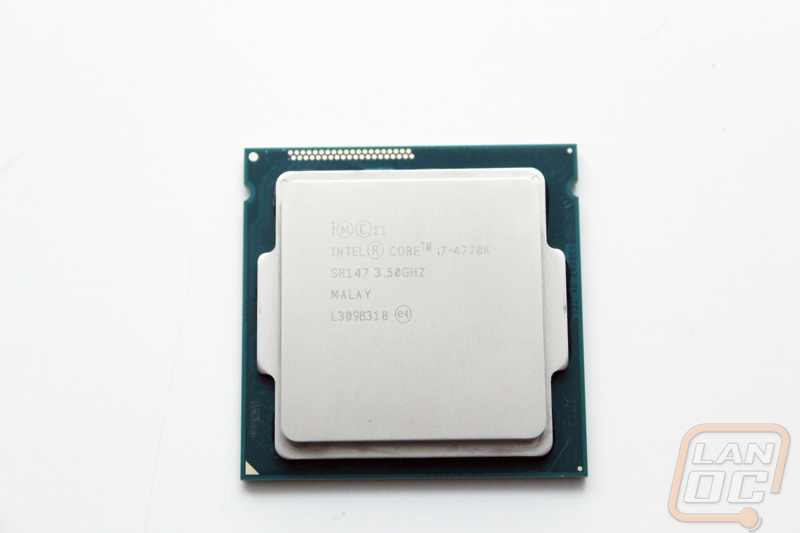 It’s hard to hate on a new CPU launch really. We always get an improvement in performance both on the CPU and GPU side of things. There are a couple downsides to the launch though. First we have a new socket this time around meaning your old boards aren’t going to work at all with this one. Even more interesting, and something that we experienced is the need for a power supply that supports the new 0 wattage power states. Our test bench had been running with the same power supply for years now and we did have to swap it out for a new model to get everything up and running. This is something that I have a feeling a lot of people are going to experience. A lot of people upgrade but keep the same power supply and if it’s not fairly new this will be an issue. Those of you who are building all new PC’s won’t have this problem at all though.

My only other completes are really fairly trivial. I would love to see Intel introduce 6 core CPU’s into their mainstream line, but we know that this is still an enthusiast line exclusive still. The same goes for the limited PCI Express lanes, Intel puts more on their enthusiast boards for people who are looking to run multi card setups. Even though the i7-4770K is very fast, it is still not designed to be the end all enthusiast CPU and Intel makes this clear when it comes to the number of cores, memory bandwidth, and the PCI Express lanes.

As long as those features aren’t important to you though, the i7-4770K is an absolute monster when it comes to performance. Especially when you look at something like its single core processing power in Cinebench, the improvement is substantial. Even more impressive was the performance jumps we saw when testing the onboard GPU. The HD 4600 GPU isn’t going to replace your desktops dedicated video card anytime soon for gamers, but if you found yourself stuck with one in your parents PC for example. You could easily get in a few games of LoL or install a few games from steam and have a great time.

Although you might not be able to bring your power supply or motherboard with you when upgrading to a Haswell based CPU, there is still a good chance your current heatsink or water cooling might fit. The new LGA 1150 socket still fits the same cooling as LGA 1155 and LGA 1156 did. I keep hoping to see Intel move to a design similar to the LGA 2011 socket on mainstream boards because it would mean no more CPU backplates, but until then sticking with the same design will do the trick.

So at the end of the day, the million dollar question is should you be considering an upgrade to Haswell? Well if you haven’t given in to the allure of Sandy Bridge and are still running a Nehalem or Core based CPU, without a doubt jump all over one. When it comes to upgrading from Sandy or Ivy Bridge the question is a little trickier as they are still great CPU’s. If it was me, as an enthusiast I would be looking to jump if I still had a Sandy Bridge CPU but Ivy Bridge CPU’s I would stick with what I have. In fact I am planning to move to this on my LAN rig once I get my hands on a Mini ITX motherboard that will fit. As I mentioned before, if you are planning on going crazy with multiple video cards I would keep my ear to the ground waiting on a Haswell based enthusiast CPU that is going to accommodate your needs a little better. Until then, all hail our new CPU overloard! 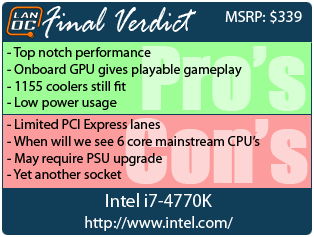 You might call him obsessed or just a hardcore geek. Wes's obsession with gaming hardware and gadgets isn't anything new, he could be found taking things apart even as a child. When not poking around in PC's he can be found playing League of Legends, Awesomenauts, or Civilization 5 or watching a wide variety of TV shows and Movies. A car guy at heart, the same things that draw him into tweaking cars apply when building good looking fast computers. If you are interested in writing for Wes here at LanOC you can reach out to him directly using our contact form.
Discuss this article
Log in to comment
Posts in discussion: Intel i7-4770 Haswell