One of the most exciting parts of the year as enthusiasts is a new platform launch from Intel. For months now people have been talking about Intel’s Haswell processors and rumors and benchmarks have been flying all over the internet for weeks now. That must mean it’s finally time for us to dig into the latest Intel CPU and Chipset and see what it’s all about and put to rest all of the speculation. Today we are going to take a look at the new Intel i7-4770 and DZ87KLT-75K motherboard. Let’s find out how the 4770 compares to the 3770 as well as the Sandy Bridge E CPU’s as well. 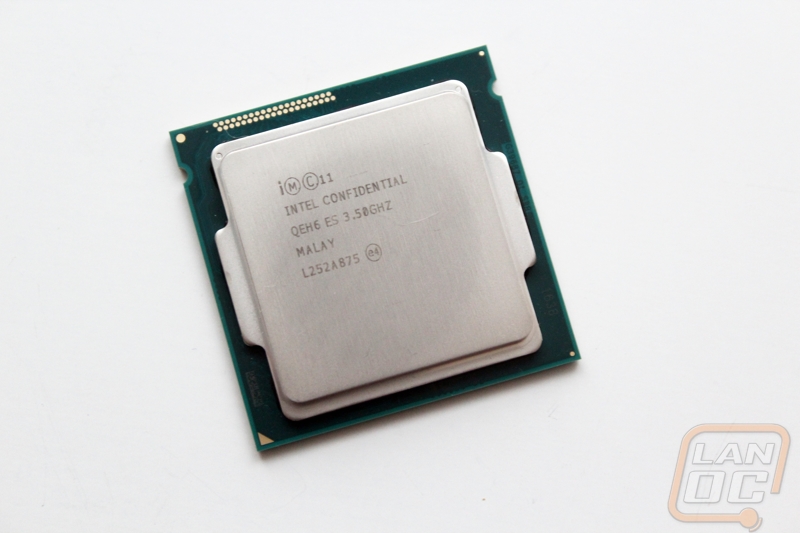 Once the excitement of a new CPU being launched starts to wear off, you then start to wonder more about what it is all about. To Start things off, to prevent Haswell CPU’s from being jammed into older incompatible motherboard they have changed the pin count to 1150 and moved the notches in the side of the CPU up a little higher. The CPU itself is the same size as an Ivy Bridge or Sandy Bridge CPU. Next to each other you have to look very closely to really see major differences, beyond the different transistors on the bottom of course. In the photo below the 4770K is on the left and the 3770K is on the right. 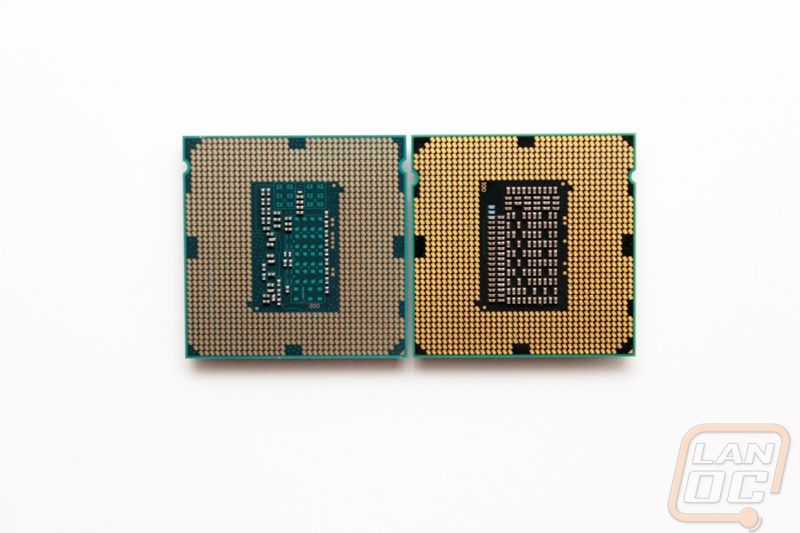 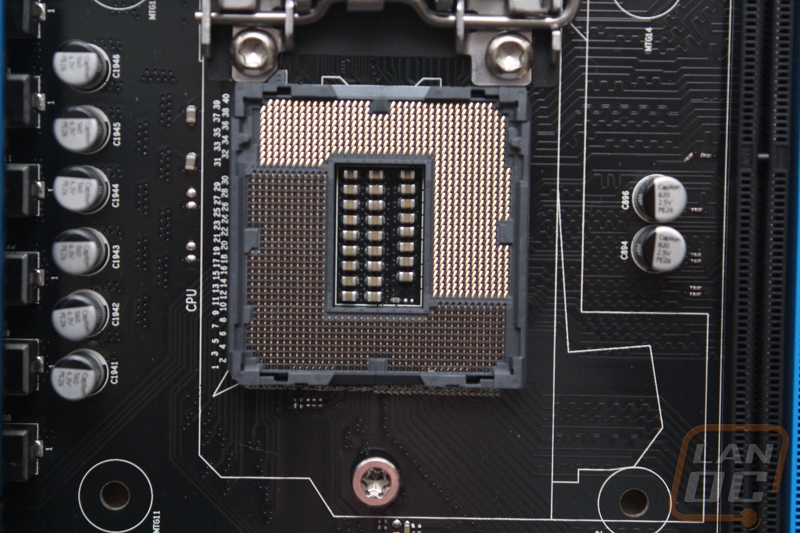 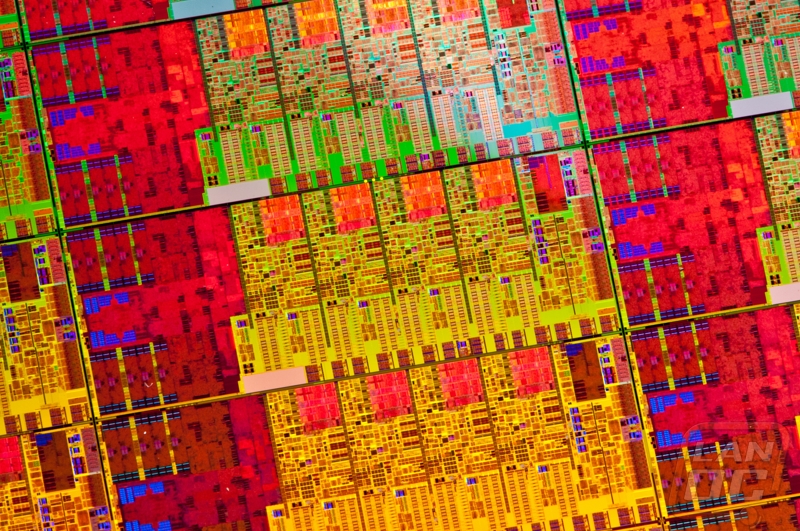 Much like Sandy Bridge based CPU’s, the LGA115x CPU’s are being introduced with up-to 4 cores leaving higher core counts for business focused Xeon CPU’s and enthusiast focused –E CPU’s.  That is what we will be testing out today, their top of the line consumer class i7-4770K. Intel has gone with the same naming scheme as Ivy Bridge where the 4770 is their top of the line CPU and the K means the CPU is unlocked. Today they are also introducing an i5-4670 CPU that is also available in a K version for those looking to overclock. The difference between and i5 and i7 CPU is hyper threading, a small bump in clock speed, and more l3 cache on the i7 models. They all have the same HD 4600 integrated GPU but the i7 models do have a slightly higher maximum clock speed on the GPU (1200MHz to 1300MHz). 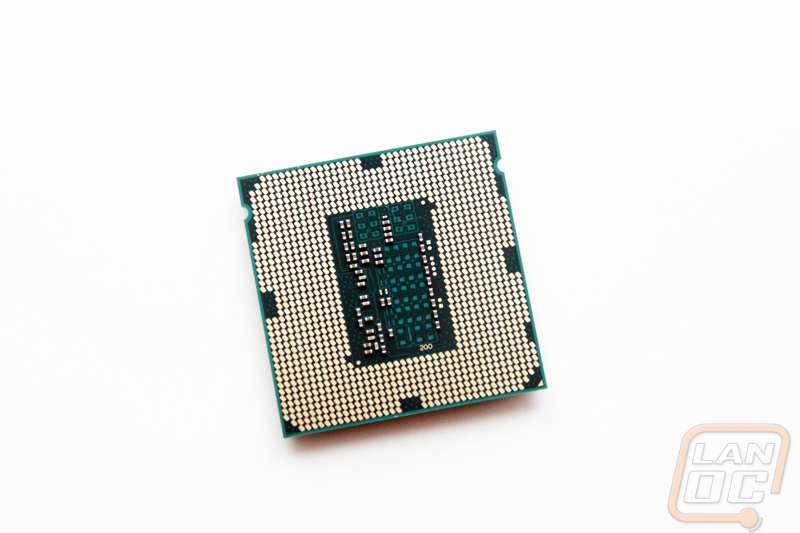 I7 Processors being introduced

I5 Processors being introduced

As you can see Intel is introducing a nice variety of CPU’s at launch for desktop use. At less than $200 for some of the i5’s I feel they are priced competitively.

The biggest change to the microarchitecture of the Haswell CPU’s is the inclusion of the iVR integrated voltage regulators directly on the CPU. Intel went with this to help introduce new idle power states and to give them more control over the voltage to keep power usage low, especially on mobile devices. Beyond that when looking at a Die Map the layout is very similar to what we have seen in the past with the Sandy Bridge microarchitecture. 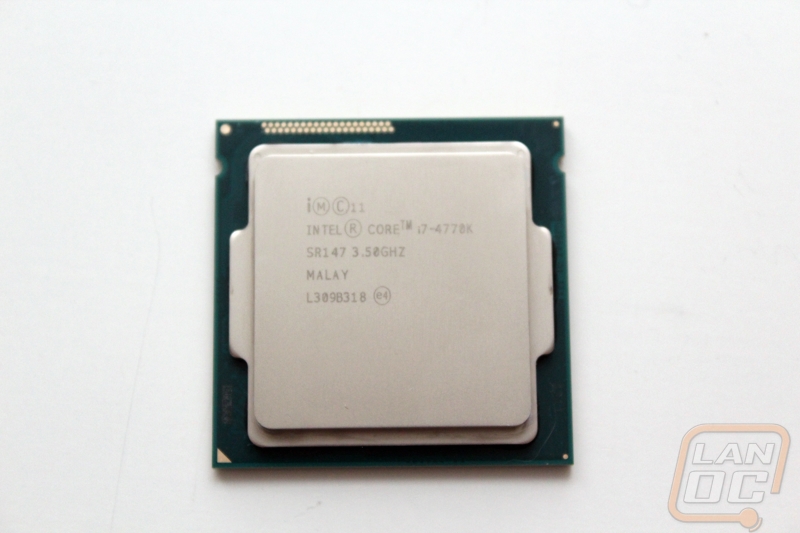 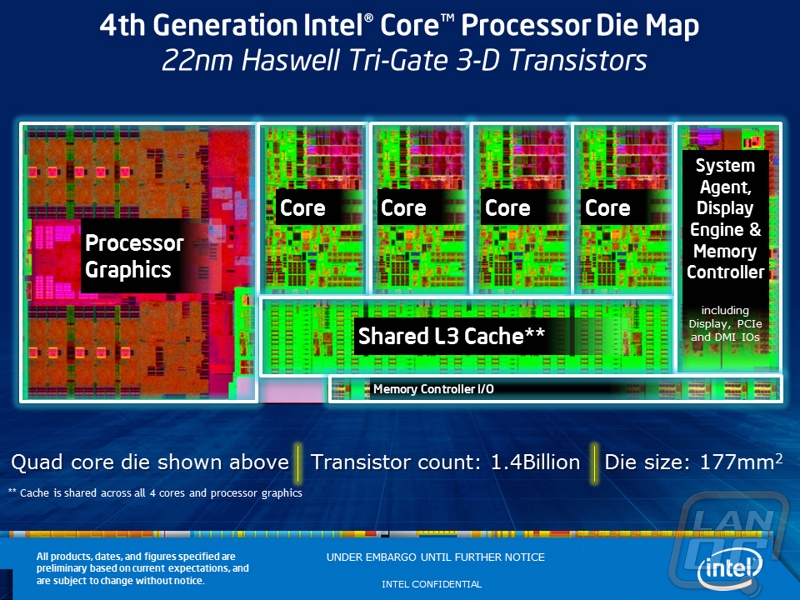 When it comes to retail versions the 4770K actually comes in two variations, with and without a fan. As you can see the without fan packaging is much smaller while the with-fan packaging is what we have gotten used to for packaging. We just happened to get our hands on a retail CPU with a fan, so we have a heatsink to take a look at as well. As you can see the heatsink design hasn’t changed at all over the past two generations. Why change something that works. The Intel heatsink is short enough for use in most low profile situations and easy to install with the push pin clip design. The heatsink ships with thermal paste directly on it for an even easier installation. Basically drop it on top of your installed CPU and push the four push pin clips in until they click then plug in the fan and you are good to go. 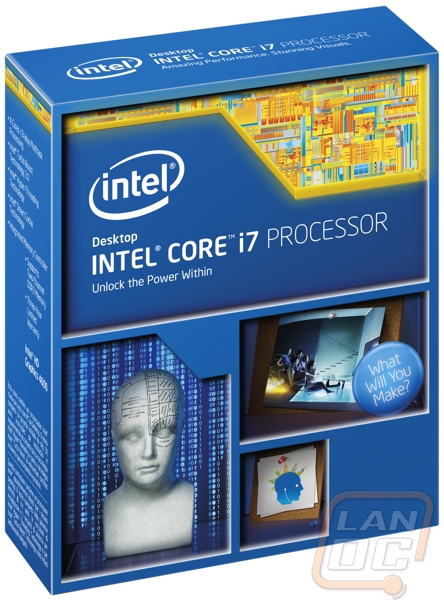 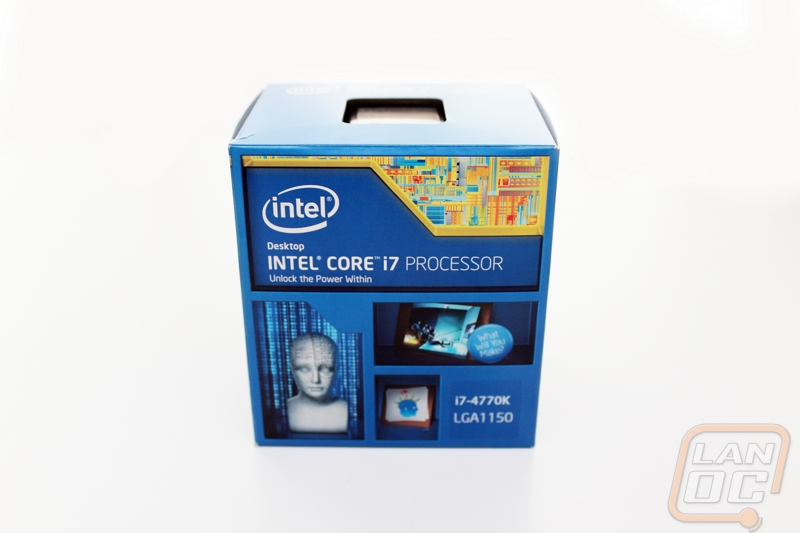 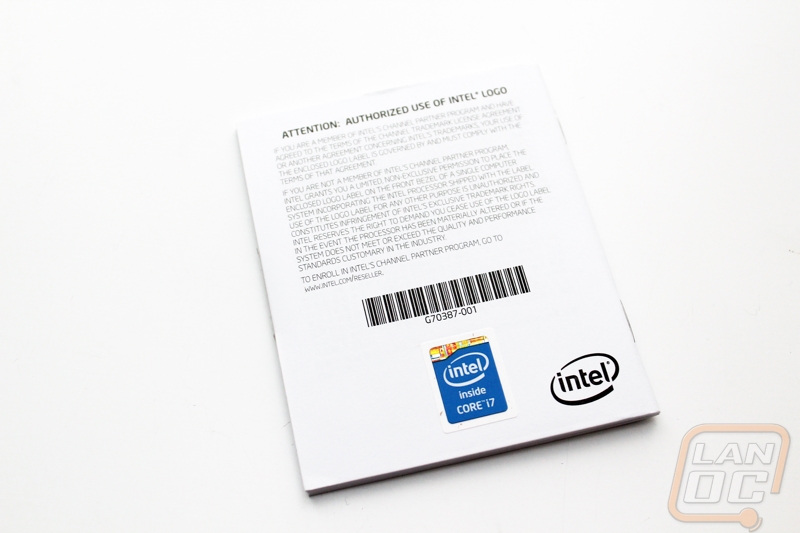 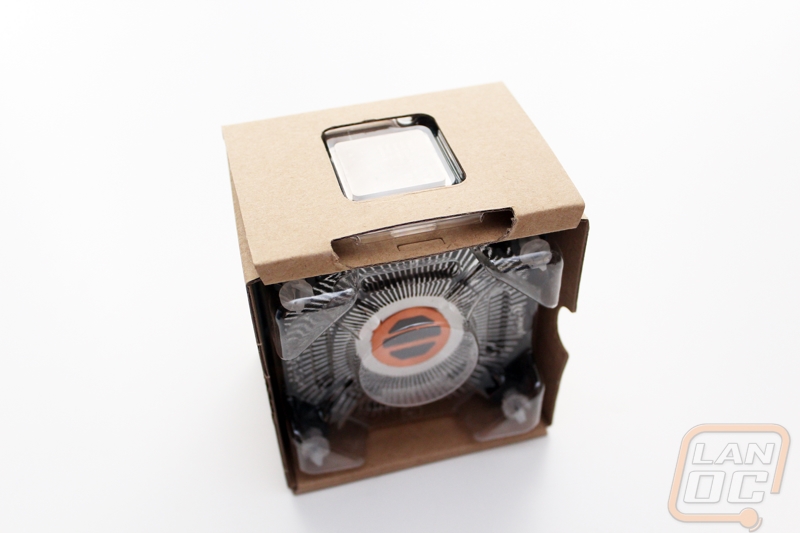 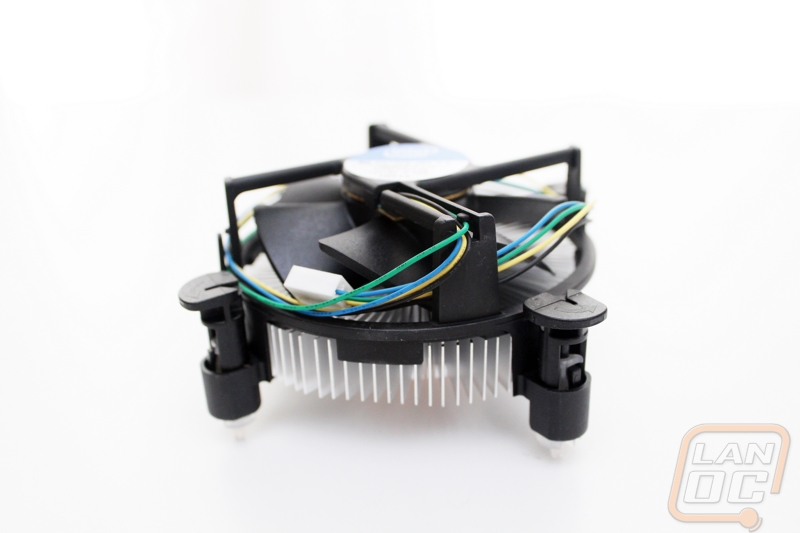 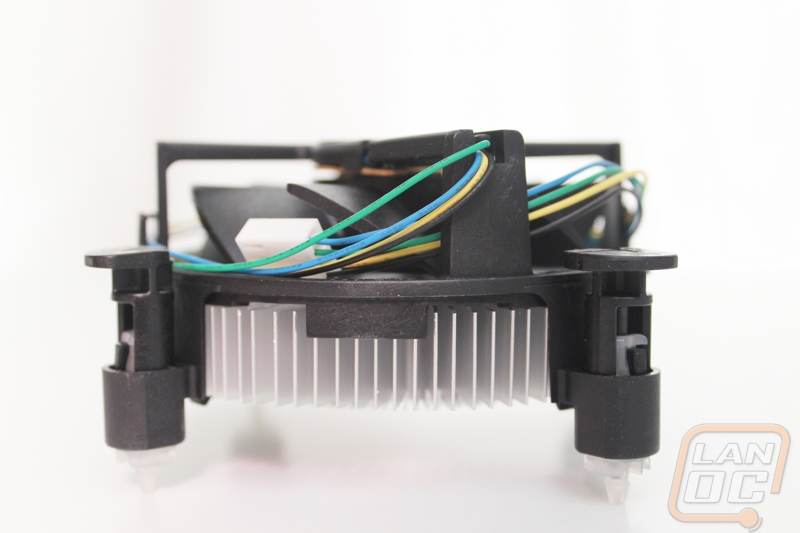 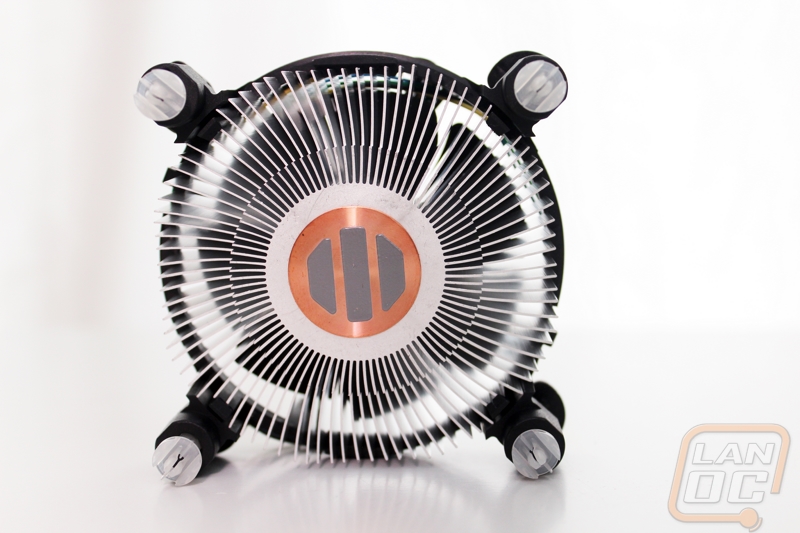 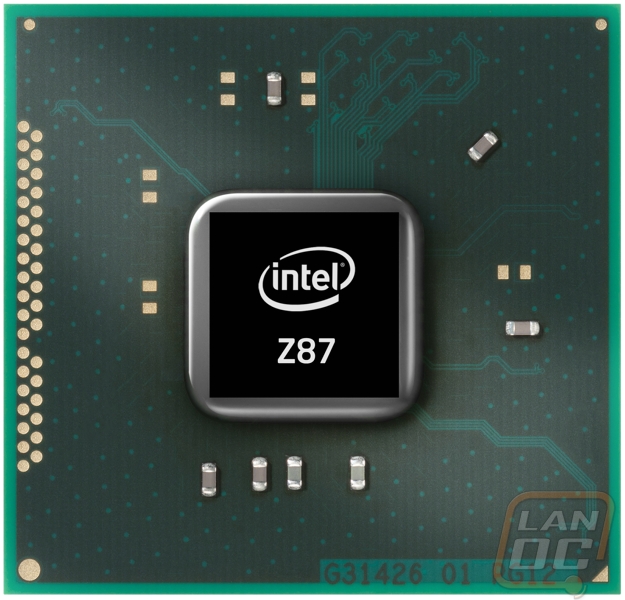 With a new CPU means a new chipset and motherboards. I introduce to you the Z87 chipset. Beyond the new LGA 1150 socket that is needed to support the Haswell CPU’s the chipset is very similar to what we saw with the Ivy Bridge/Panther Point launch. There are a few slight differences if we take a look at the block diagram though. In the USB ports for example Intel has increased the support for USB 3.0 ports from 4 to 6 to add additional USB 3.0 ports as they grow in popularity. Along with that the support for USB 2.0 ports also went up from 10 now to 14 as well. Over on the SATA side of things previously the chipset supported 6 ports total with only two of them being SATA 3, now the overall number is the same at six but all six ports are SATA 3 capable meaning you won’t have to worry as much about what ports to plug your fast SSD’s into, before you had to figure out what ports were SATA 2 and SATA3 then sort out the ports running on the chipset as well as a secondary controller. 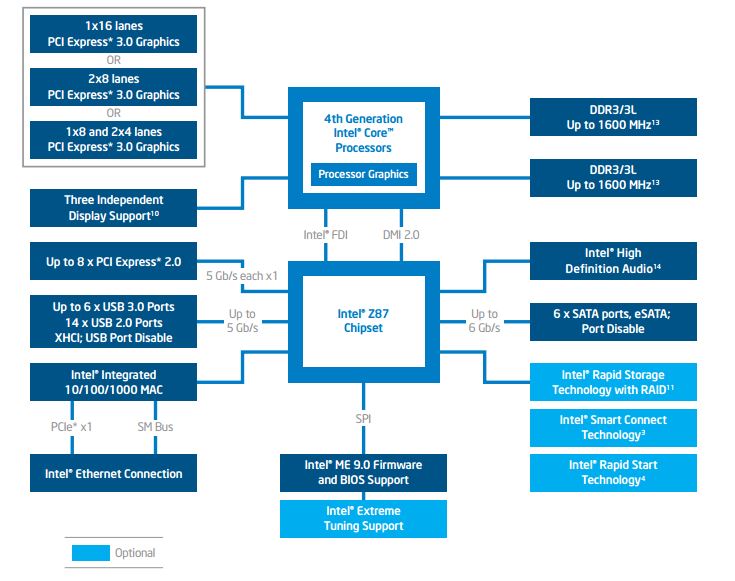 When it comes to actual PCI Express lanes, nothing has changed from the Z77 platform; we still have 8 PCI Express 2.0 lanes as well as the 16 PCI Express 3.0 lanes that can be divided up in a x16 x8+x8 or other variations. This means that things will still be tight when it comes to multi GPU configurations on this platform. This isn’t a big shock as Intel still does not consider the Z87/LGA1150 platform to be their enthusiast products. 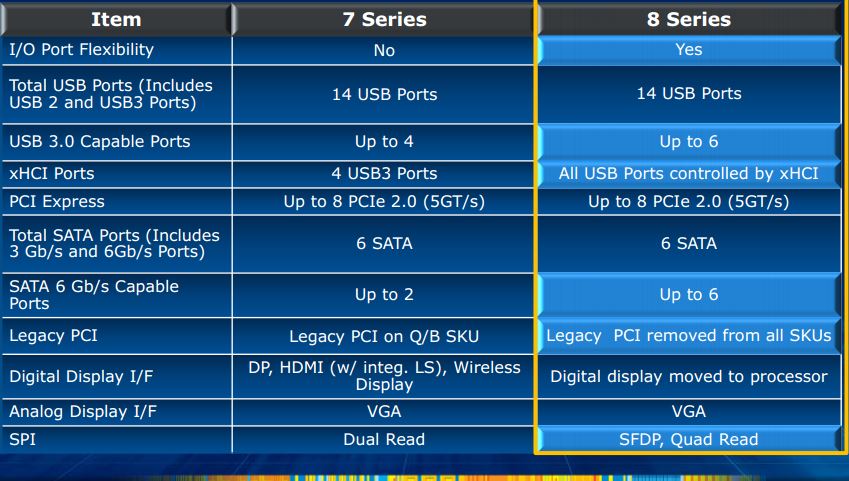