It seemed like the virtual ink hadn’t even dried on our Sandy Bridge review and people were already talking about waiting for Ivy Bridge to come out. The same goes for our Sandy Bridge E write-up, a lot of people on the forums and at our events spoke about waiting for Ivy before making a decision. Well I can finally say that today is that day. We are going to take a look at Intel’s new Ivy Bridge CPUs, specifically the i7-3770K. We will put it up against all that Sandy Bridge had to offer along with a few Sandy Bridge E CPUs, including the competitively priced i7-3820. At the end of the day you will know what it’s all about and we will hopefully help give you the facts in your buying decision.

By now most of you should understand Intel’s Tick and Tock system. Basically Intel has two product releases for each manufacturing process size. Take 32nm for example. When they first introduced 32nm with Westmere, it was still based on the Nehalem Microarchitecture, only smaller. Then in 2011 they introduced Sandy Bridge, still on 32nm but a new microarchitecture. Today we are going over Ivy Bridge, Intel’s 22nm CPU based on the Sandy Bridge Microarchitecture. So this is the "tick" to the Sandy Bridge “tock”. To go along with the 22nm manufacturing process, this is also the first use of the 3D Transistor, the 3D design allows for a smaller design. They have integrated power aware interrupt routing for better performance and power efficiency. 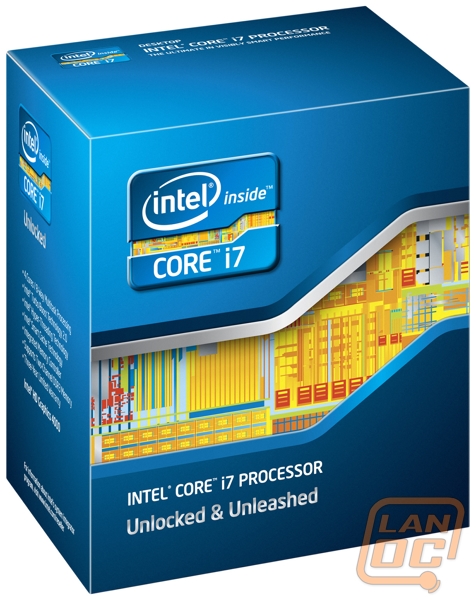 As we spoke about during the Sandy Bridge E launch and even the original Sandy Bridge, Intel maintains two different proccessor lines: one being mainstream and one enthusiast. You need to remember that Ivy Bridge/Sandy Bridge is designed to be a mainstream architecture. You can and will see amazing performance, but there are a few areas where you are still going to want to look at Sandy Bridge E CPUs, a CPU designed for the enthusiast and power user. A few good examples of that would be in the number of cores you can expect to see on them, memory bandwidth, and PCIe lanes. Ivy Bridge will get you 4 cores while Sandy Bridge E will get you 6 and someday 8. The same goes for memory bandwidth: Sandy Bridge E supports quad channel memory where you have dual channel on Ivy Bridge. Last you have a limited number of PCI lanes on Sandy Bridge/Ivy Bridge limiting you when running multiple video cards. Please keep in mind that we are not putting Ivy/Sandy Bridge down at all. But you have to remember that as a mainstream product, it does have its limitations. That is why today we will also be putting it up against the Sandy Bridge E CPUs. 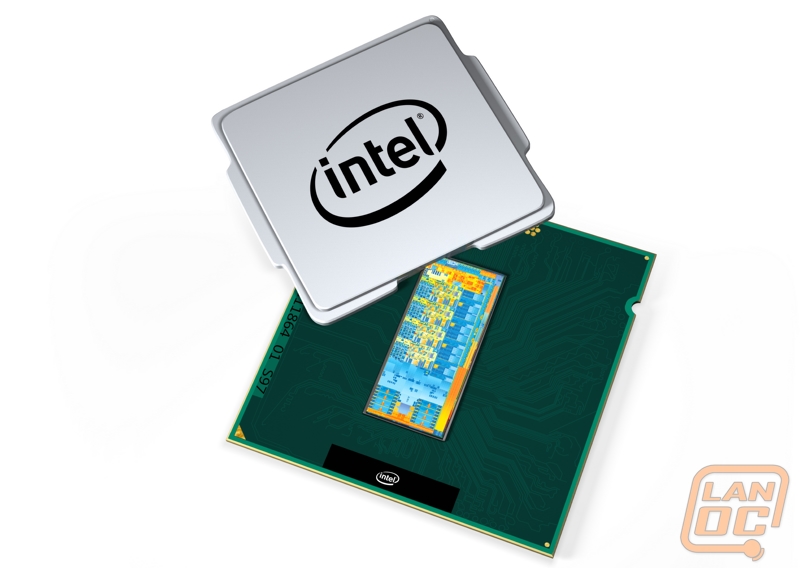 Although we will only be taking a look at one processor today, Intel is actually launching a full line of Ivy Bridge based  I7 and I5 processors. As with Sandy bridge they have tried to make the naming scheme as easy as possible. You have to break it down by three things.  Using our test CPU as an example. 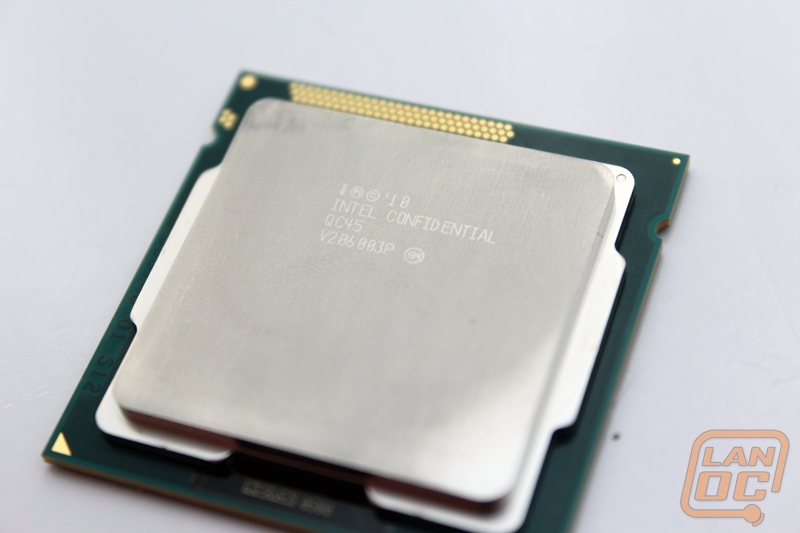 3770 - is the model number, these numbers do go higher as you get better performance

K – In this case the CPU is unlocked and able to be overclocked. But you will also see S and T in the low power line and sometimes nothing at all. Nothing means it’s a standard CPU that is locked. S processors are performance optimized lifestyle SKUs, while the T are power optimized. You will also see M for mobile and XM for an Extreme edition Mobile, this leads us to the assumption that we could also see X labeled Extreme CPUs on the desktop side also.

I’m sure you are wondering by now what is different about Ivy Bridge beyond just the manufacturing process. They did make a few changes to the CPU side beyond just lowering the CPU’s power usage with the smaller manufacturing process. One of the memory side improvements is support for DDR3 frequencies up to 2800MHz now, up from 2133MHz previously. Along with that there is now support for XMP 1.3, something we saw compatibility with when Sandy Bridge E launched but Sandy Bridge only supported 1.2. Data structures that used to be statically shared between threads can now be dynamically shared giving improved performance in single core performance. Together that may not seem like very much, but combined with increased turbo frequencies it all adds up to more performance. 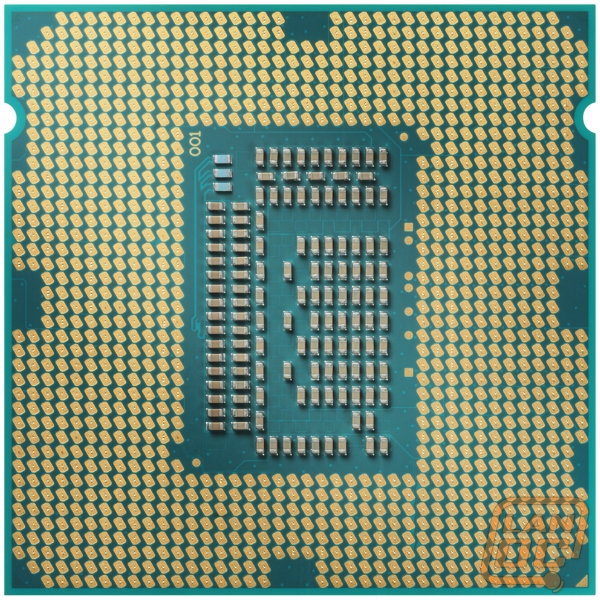 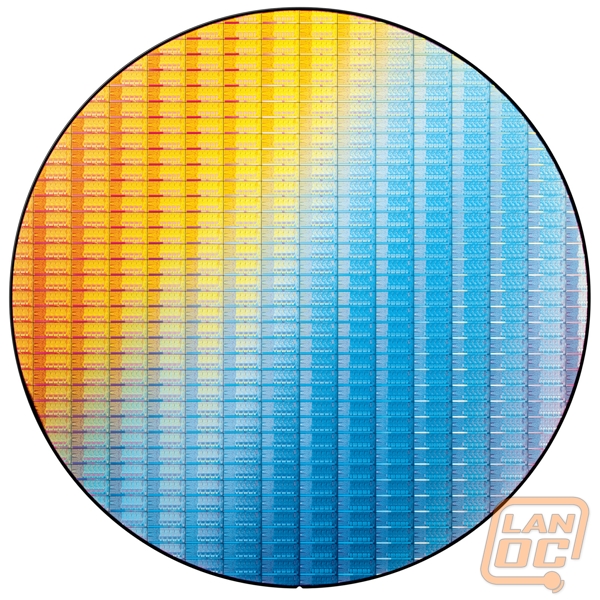 On the integrated GPU side of things Intel has spent a little more time. In fact it looks more like a tick than a tock, we would normally see improvements like this with a new architecture. First and foremost, there is finally support for Direct X 11. They have also added support for the first time with on processor graphics for three displays. For performance, they have added more execution units going from 12 on Sandy Bridge to 16 now on the Intel HD 4000 GPU (the one we will be testing).  It will be interesting to see how this affects performance. According to Intel Sandy bridge had 50 new games playable out of the box and Ivy Bridge with the HD 4000 will play 100. They are also promising twice the performance when using Intel Quick Sync Video; it’s obvious that the GPU was the focus this time around! 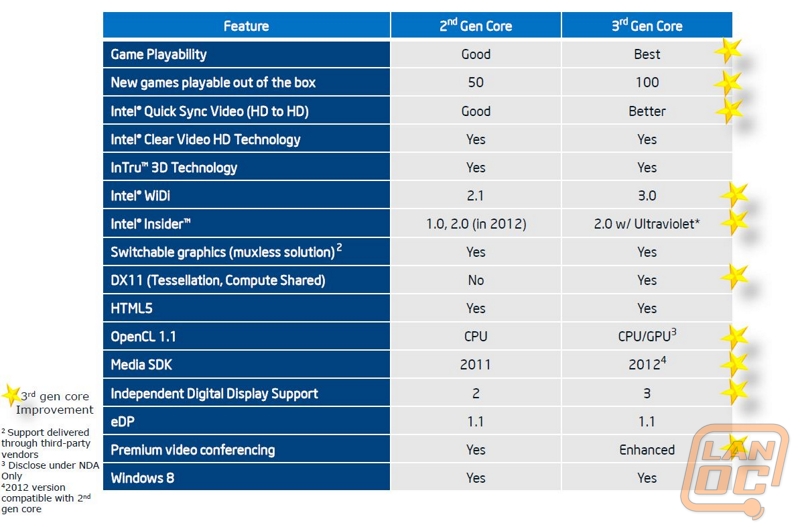 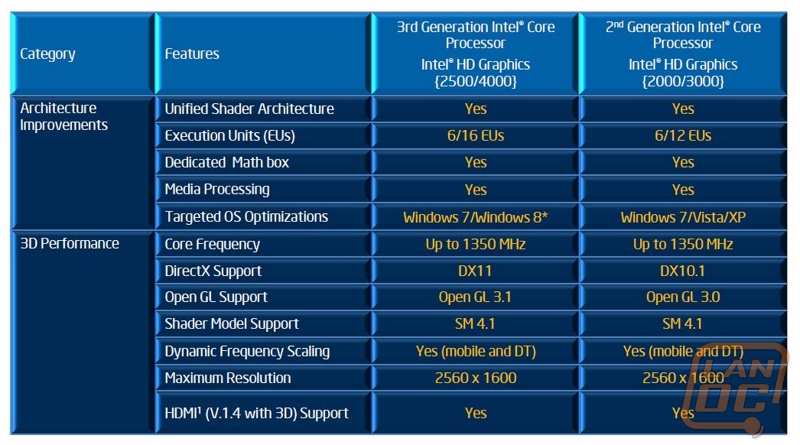 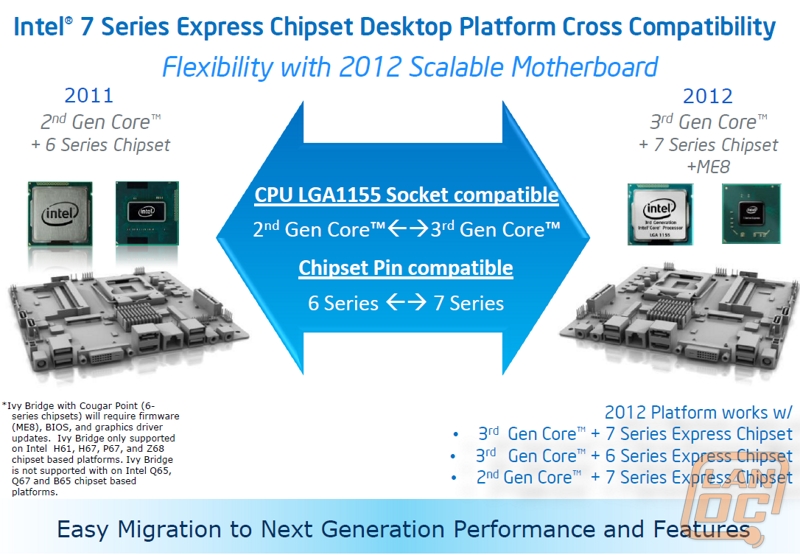