I’ve been working with Noctua for 12 years now with reviews and various projects and while I have grown to love that tan and brown look I couldn’t be happier that they now have their chromax.black cooler lineup. For years in order for you to get to benefit from the low noise and great cooling performance that Noctua always offers, you had to settle with fans that wouldn’t always match your build and recently with everyone going black on their coolers Noctua looked a little dated. They did eventually bring out covers which I do like, I even have one on the U12S on our GPU test bench currently while we wait for parts to come in to repair the custom water cooling. But none of that is a problem now. When Noctua asked which model I wanted to check out, I couldn’t pick just one. I’ve had all three coolers in the office in the past and loved them. I just had to check out how they look with the blacked-out design. Especially with the LTT partnership which includes orange anti-vibration pads, something I have been begging for. I just wish the orange would stick around. 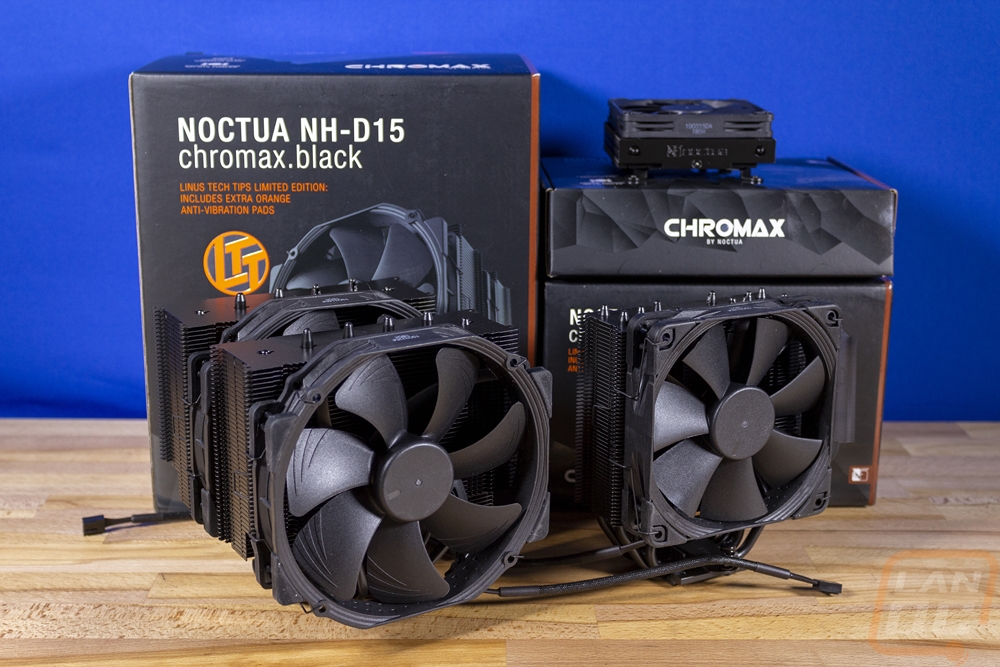 So when it came to testing, I wasn’t able to test the NH-L9i on our Ryzen testbench, but having used it in the past I know exactly what to expect from it. It isn’t a cooling monster, but it does offer enough cooling capacity to run mid-range CPUs without taking up any space at all in your system. I run these on multiple SFF systems and being blacked out now just makes things even better. Noctua’s only real competition in the sub 32mm tall cooler market has a blacked-out model as well with the Cryorig C7 G so it is much needed. But now Noctua SFF fans can now enjoy the same good looks.

The NH-D15 just dominated our cooling testing, showing why going with the largest cooler you can fit is always helpful. Especially now with both AMD and Intel CPUs creating enough heat for it to be a real concern. The D15 was even capable in a one fan configuration on the off chance you can’t fit it with the second fan installed. With the D15 and the U12S Noctua showed their attention to detail with all of the hardware including screws and springs being blacked out. In addition, like always, you get things like a full tube of thermal paste and even a screwdriver to do the install. Things like the spilt up instructions are also helpful to keep the installation simple and the heavy-duty metal case badge is cool as well even though I don’t use case badges. Speaking of installation, that is where Noctua stands out the most. Especially after checking out how Cooler Master and Be Quiet! do their brackets. Going back to a Noctua cooler is just noticeably easier. There is a reason I use them on our test benches any time we aren’t doing water cooling, they are quick and easy to remove and reinstall.

The NH-U12S is just a workhorse. Noctua could really use a second 120mm cooler option that is thicker and potentially with dual towers or dual fans. But the U12S is basically your completely standard tower cooler. Except it runs quieter. The other main reason I have used the U12S for so long on our test benches is because size and cooler performance are as middle of the road as you can go. It isn’t a huge cooler like the D15 that might not fit in every system and it isn’t an SFF focused cooler. It fits in any traditional case, it is quiet, and it cools well.

I didn’t touch on it earlier, but I did also get pictures of all three coolers together just to put their sizes into perspective. As you can see below, once you get the three together it shows you just how big the D15 is and how small the L9i is as well. But one thing is for sure, all three look amazing. 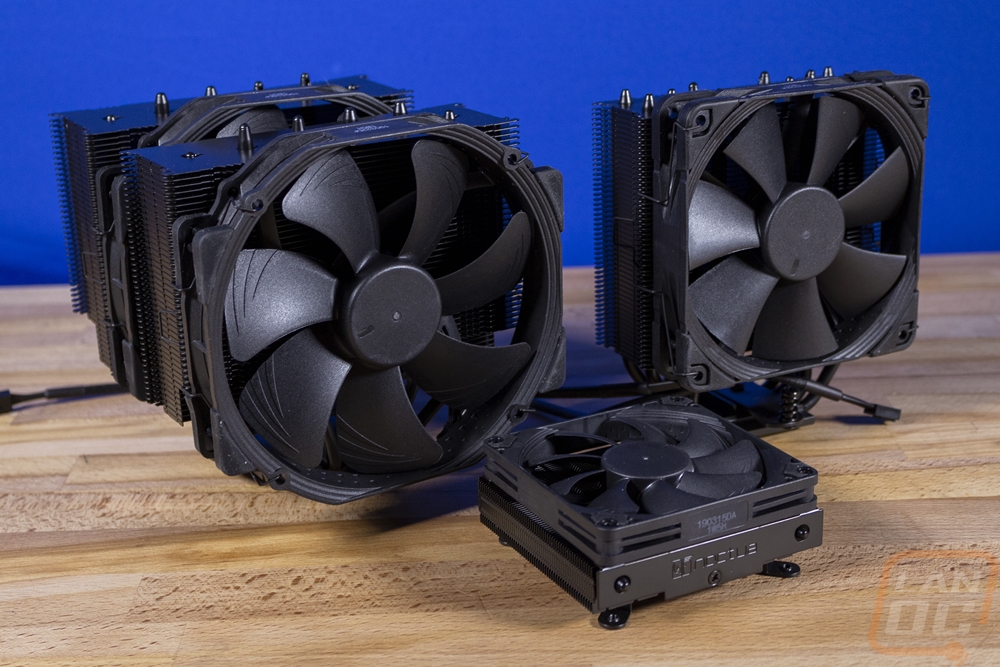 Now Noctua isn’t known for being a value cooler company. They take their time in development, seriously they spend YEARS bringing out just a single fan or cooler. Seeing something new at Computex might mean you will see it in about a year to a year and a half. This is because they don’t rush things to market or compromise and that is also shown with details like in the accessories you get. So when it comes to pricing, you will pay for the quality that they offer. The full tub of thermal paste that is always included does help things though. On its own, it would run you around $13 on Amazon. So I was worried that the new chromax.black models might take their prices up to levels that couldn’t be justified by the performance. Now they do go up in price. The L9i, for example, is currently $39.99 but the chromax.black model is $49.99 on Amazon. The U12S goes from $59.99 to $69.99 and the D15 goes from $89.99 to $99.99. This ends up putting the chromax.black models a touch above the prices that Be Quiet! has their comparable coolers. But I don’t think Noctua priced them out of reach overall. 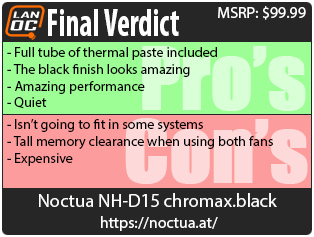 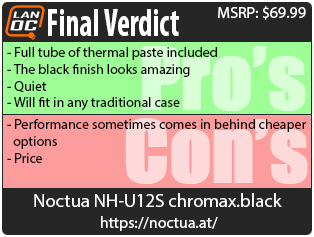 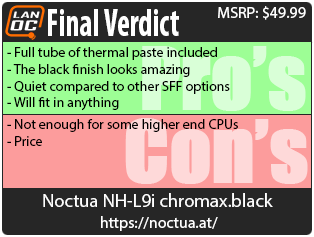 You might call him obsessed or just a hardcore geek. Wes's obsession with gaming hardware and gadgets isn't anything new, he could be found taking things apart even as a child. When not poking around in PC's he can be found playing League of Legends, Awesomenauts, or Civilization 5 or watching a wide variety of TV shows and Movies. A car guy at heart, the same things that draw him into tweaking cars apply when building good looking fast computers. If you are interested in writing for Wes here at LanOC you can reach out to him directly using our contact form.
Discuss this article
Log in to comment
Posts in discussion: Noctua chromax.black Coolers

We have 1336 guests and no members online