Cooling is only part of the picture when picking out a heatsink. You also have to make sure it is going to fit in your system and for me, noise is important as well as aesthetics. All of the chromax.black coolers have the looks. Blacking out the already good looking Noctua coolers really makes them look good but will they fit in your system? I do keep track of the overall size of each of the coolers including their fans. With that, I also check on if they will support tall memory. The NH-D15 doesn’t support tall memory if you are running both fans. But if that is a significant issue, my previous testing did show that even with one fan it is better than the other coolers and it does support tall memory with just one fan. It is 6/7mm taller than the other coolers, but not completely out of the possibility of fitting into most standard sized cases. SFF is its own thing and that is were the NH-L9i comes into play, it is the same height as standard memory so its height isn’t an issue at all.

Below I have pictures of the D15 installed on our test system. You can see how when installed it sits right up to the edge of the I/O cover on our motherboard and the second fan sits over the memory. Even with just one fan, the memory clearance is tight, you can only run dual channel memory in the 2 and 4 slots.

The U12S is a LOT better with room for tall memory in all slots and room on the other side if you are using this on an X299 board for example that might have memory slots on both sides. 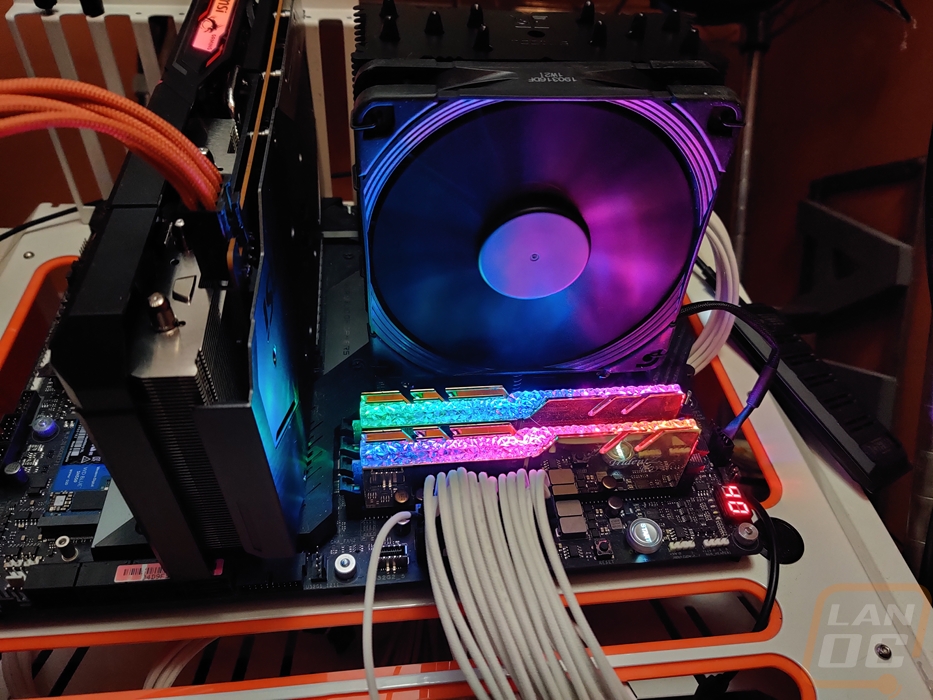 I didn’t forget about noise testing as well. For this, on each of the coolers, I run three tests. I setup our decibel meter 18 inches away and test fan noise at 50% and 100% fan speeds. Then I test the noise level while doing the AIDA64 CPU Stress Test after temperatures have leveled off and are consistent. All of the coolers tested didn’t do to bad here really. The D15 did run louder when both fans were cranked up but under load, it was quiet just like the others. This is where the Hyper 212 does fall off though when compared to the other 120mm coolers, it was the noisiest tested when the fan was cranked up.

We have 1356 guests and no members online