Because I am taking a look at all three coolers, I have split the photo/features sections up by each cooler starting with the smallest, the NH-L9i. I should point out that the L9i is one of two models that Noctua makes in their standard lineup designed for extremely small form factor builds. They are basically the same cooler, but the I designates this as their Intel model which is designed for the square mounting of Intel’s mainstream lineup. You can use this cooler on AMD but you need an AM4 bracket where the L9a model is designed for the longer AMD mounting with a slightly larger cooler and of course it comes with the correct brackets. I have to point this out because the Chromax black model is only available in the L9i version right now even though AMD currently is the more popular CPU current with Ryzen.

Before checking out the cooler I did want to take a quick look at the packaging. Especially with Noctua actually changing things up here as well. The box itself isn’t really any different from the other L9i’s, but the Chromax black model does have a blacked out box and they feature a photo of the cooler right up the top which I love. They have the model name all listed out and right under that, they highlight the coolers' main features. Its 37mm height, it having perfect ram compatibility, and that because of its small size it also doesn’t have any issues with any PCIe cards. They also show what you get inside, the NH-L9i cooler and the NF-A9x14 fan, both in their Chromax black version. The back of the box goes into more detail with the main features mentioned on the top as well as having another photo of the cooler and fan. I also like that they slip in a specification listing on the side which has all of the info you might need as well as their 6-year warranty. The only thing missing is telling you what TDP the cooler is used for, but that is because it is complicated and depending on the brand and generation it might support a higher or lower TDP. 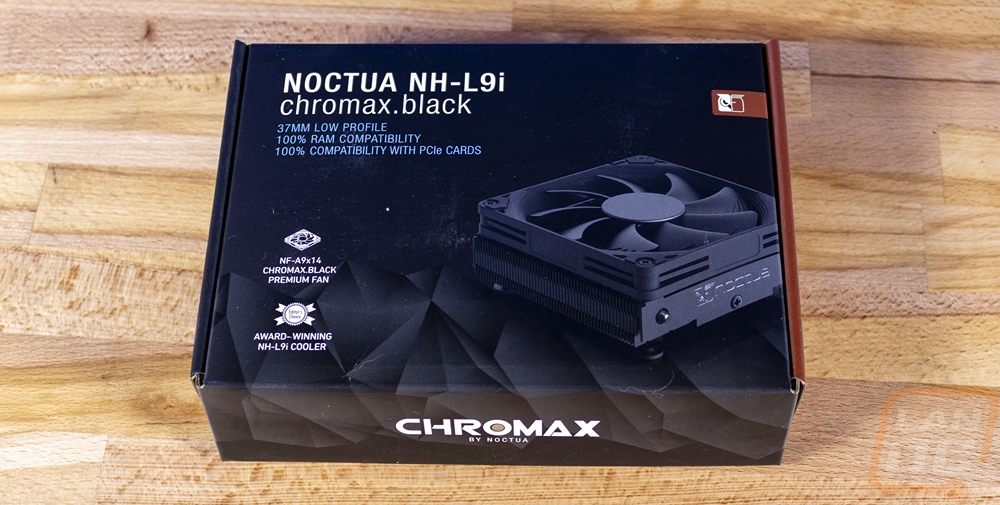 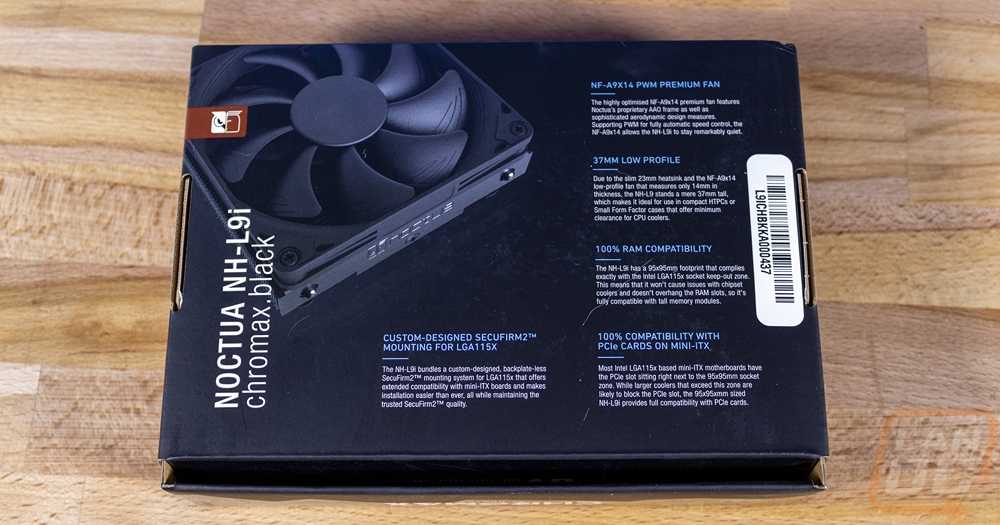 Inside of the box, everything comes wrapped up in foam with two foam trays. One that holes the heatsink and then one on top that goes around the heatsink as well but has cutouts for the accessories. This includes the four mounting screws, the LNA adapter which slows down the fan speed for better noise levels, the all-metal (and thick) case badge, and a full tube of thermal paste. Noctua includes a full tube of thermal paste with every cooler and it alone adds a lot of value to their coolers in my opinion. Thermal Paste is expensive when picked up independently, especially if you need to buy it locally. 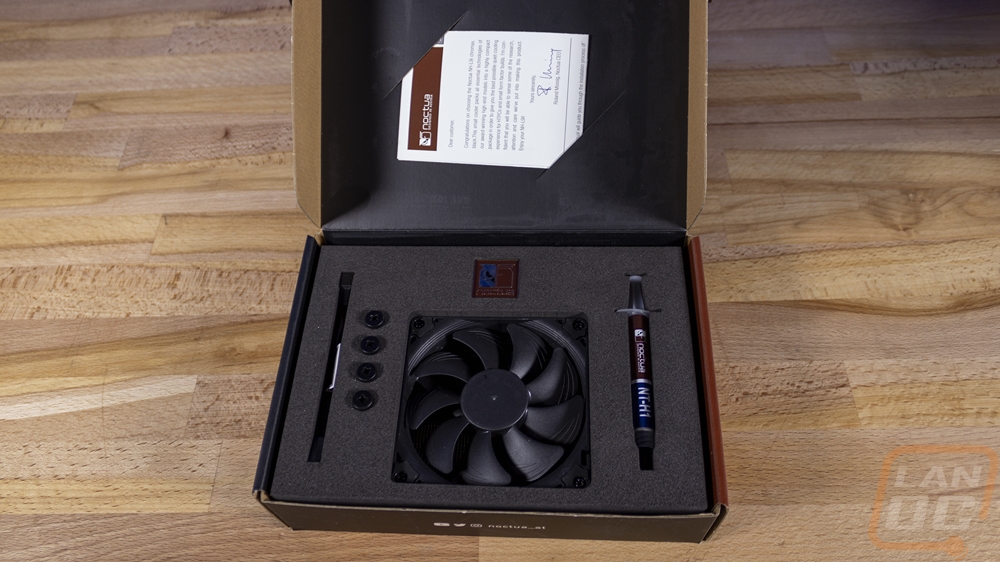 The NH-L9i has been one of my favorite cooler designs for years now. I’ve used them in multiple builds using both the L9i which is the Intel design here and the L9a which is the AMD design which used to just come with AMD brackets but now the AM4 model drops the squared off shape for a slightly longer design that matches the longer shape of the AMD mounting. The reason I like this design so much isn’t because it is a monster heatsink with cooling for days. It is because it is extremely compact. It has the exact same size and shape as the Intel mounting pattern that has been used with all of Intel’s mainstream CPUs for years now and it is short. It is a lot like Intel’s stock cooler, but with improved cooling. The cooler is 37mm tall with the fan and 23mm without the cooler. This puts it right at the same height as a standard memory stick and under the overall IO as well. This is important because with some cases, like the Sentry 2.0 for example that are trying to be extremely compact they basically set the space by the top height of the rear I/O. There aren’t many coolers that even attempt to fit in that form factor. Intel’s stock coolers in this size are aluminum extruded designs which aren’t as efficient where the L9i here has a traditional heatsink design. I like that on the ends Noctua also uses plates that clean up the look to mount the fan on top. 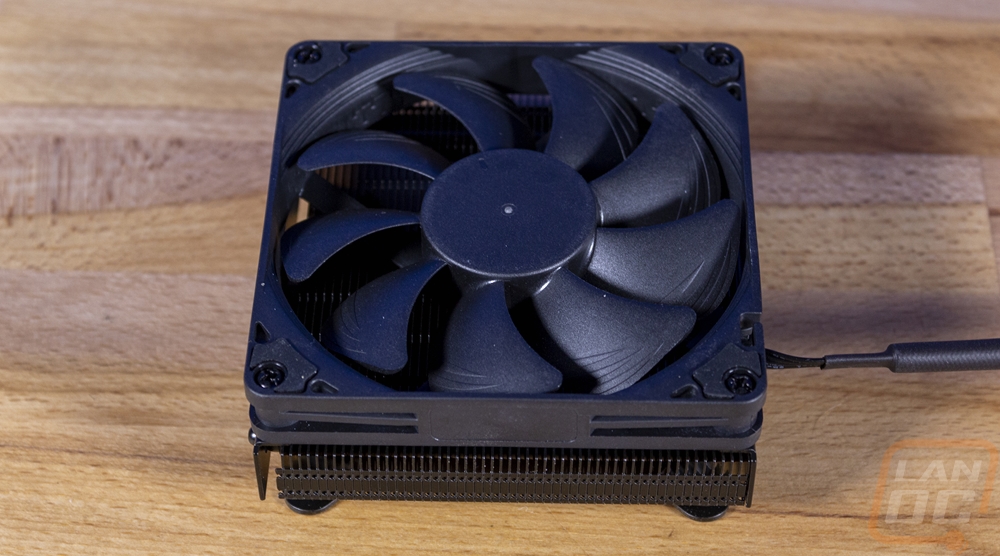 The NF-A9x14 HS-PWM fan that they use is also important in the design as well. It is a 92mm fan but the thin design is what makes this cooler possible. For the new Chromax Black design, they didn’t change anything on the design. They just changed the tan shell and the brown fan for black and went with black for the normally brown rubber vibration mounts as well. The fan still has the same small ribs on each blade, the step down effect around the housing, and the rubber vibration mounts. It is still 12mm thick as well. The cable is still sleeved in black and this time around it better matches the fan. Honestly, I wish I had a stack of these, all of the other L9i/a coolers I have in use would look better with this blacked-out fan. In fact, in one build I even designed a fan cover that I 3D printed in black to cover up the brown when it didn’t match the rest of the build. 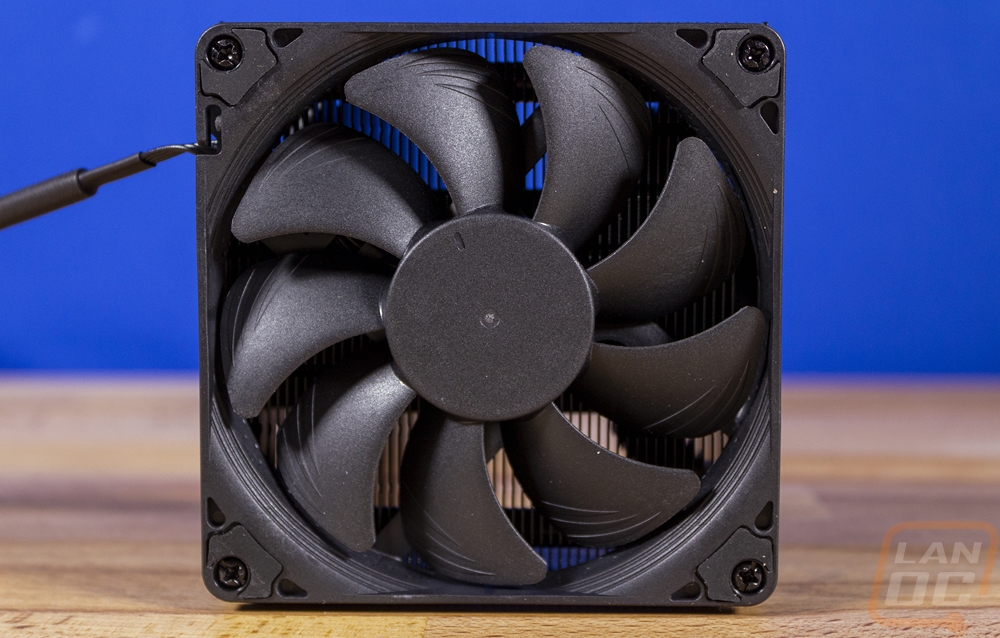 In addition to the thin fan design, the other half of the magic for this cooler is the mounting. Traditionally cooler installation includes installing the mount then screwing the heatsink down to that. This cooler drops all of that and just ahs the two brackets. You get four thin thumbscrews that install from the back of the motherboard and that is all you have to do to install the cooler. Other than using the included thermal paste. They also give you a set of long fan screws as well if you have room and would like a thicker 92mm fan. I will say though that the contact surface could be improved on, there is a record like swirl that keeps this from being a mirror-like finish. 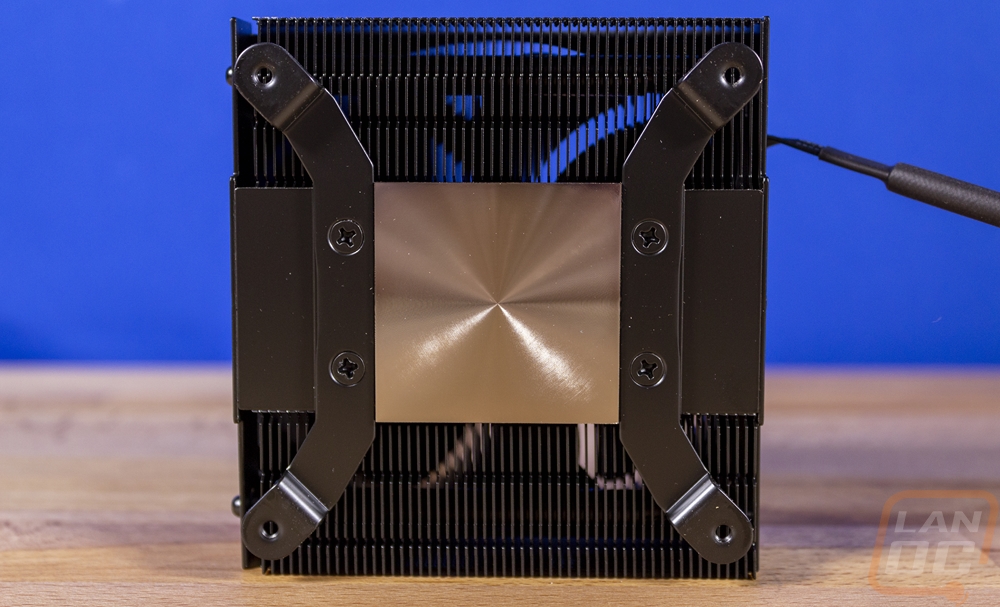 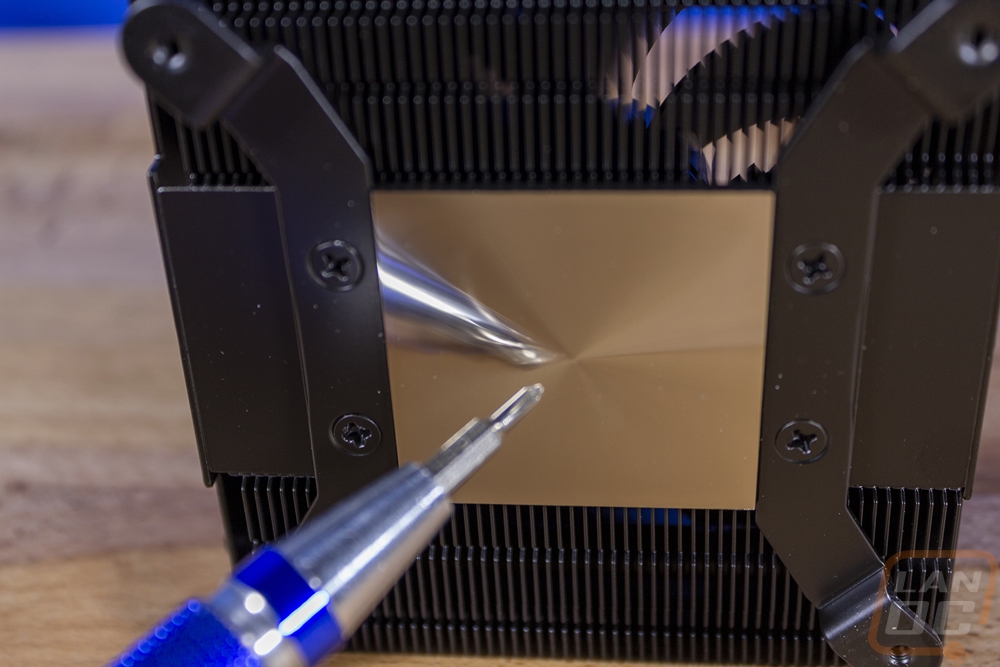 We have 1161 guests and no members online