The Noctua NH-D15 is Noctua’s big mambajamba and I originally took a look at it all the way back in 2015. This chromax.black version does have a few changes in the packaging just like the other Chromax coolers. The box is blacked out with that angular design down on the bottom of the front. There is still a touch of brown over on the right edge along with the small Noctua logo. I like that they have a large photo of the cooler on the front so you know exactly what you are getting and the model name is the biggest font visible and right up on top so it is easy to find. Like the U12S, the D15 that we received is the LTT version so it does have their logo on the front to let you know that it comes with the orange vibration pads as well, which aren’t included in the picture. The size of this box is hard to see with these pictures, but this is HUGE. Noctua used that extra space to break down a lot of the features on the back along with a picture of the side of the cooler. Each feature has a description with it. Then around on the side, they included a full specification listing for both the heatsink and the included NF-A15 HS-PWM fan and a list of everything that comes in the box. 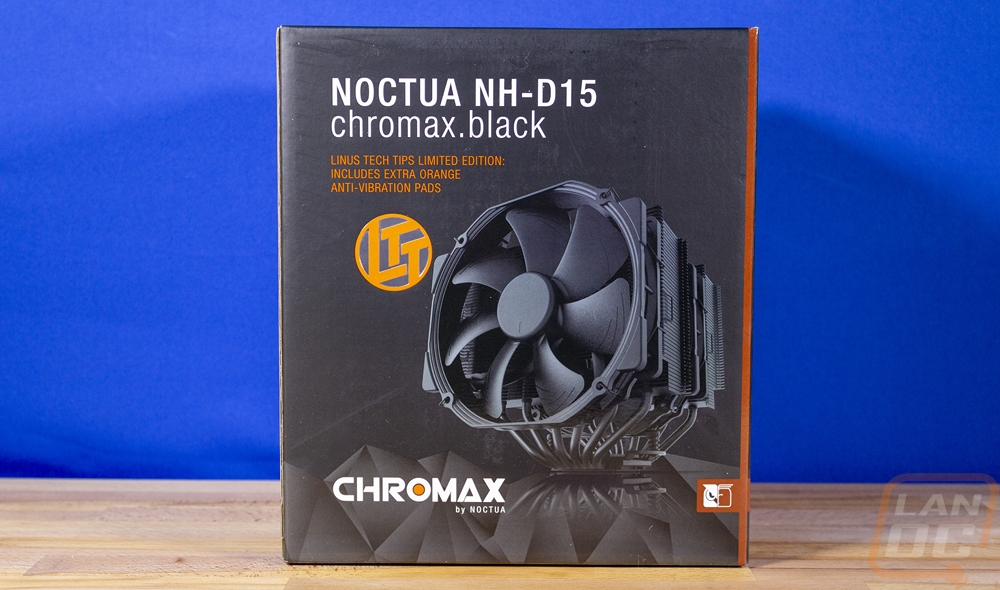 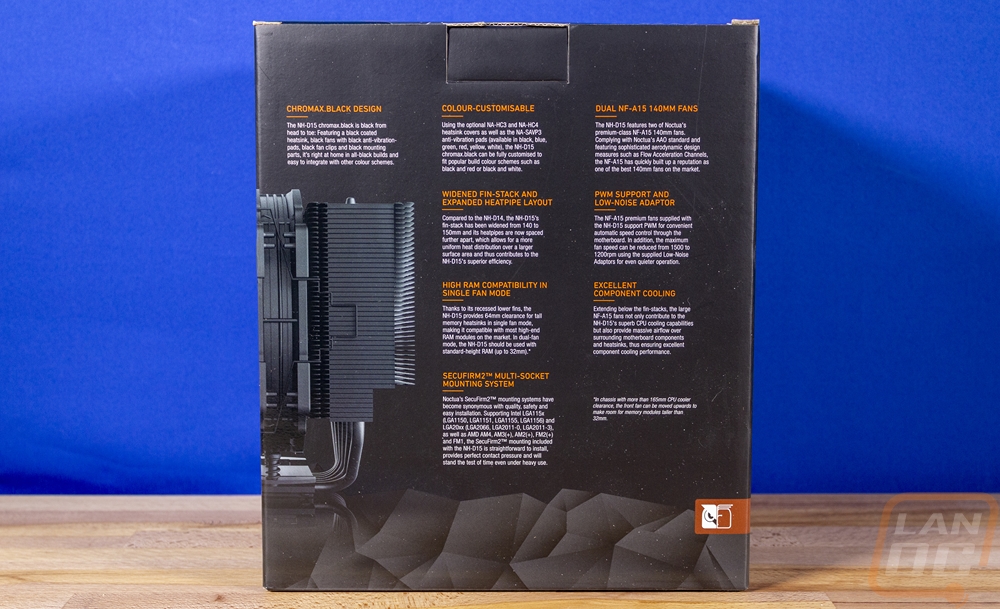 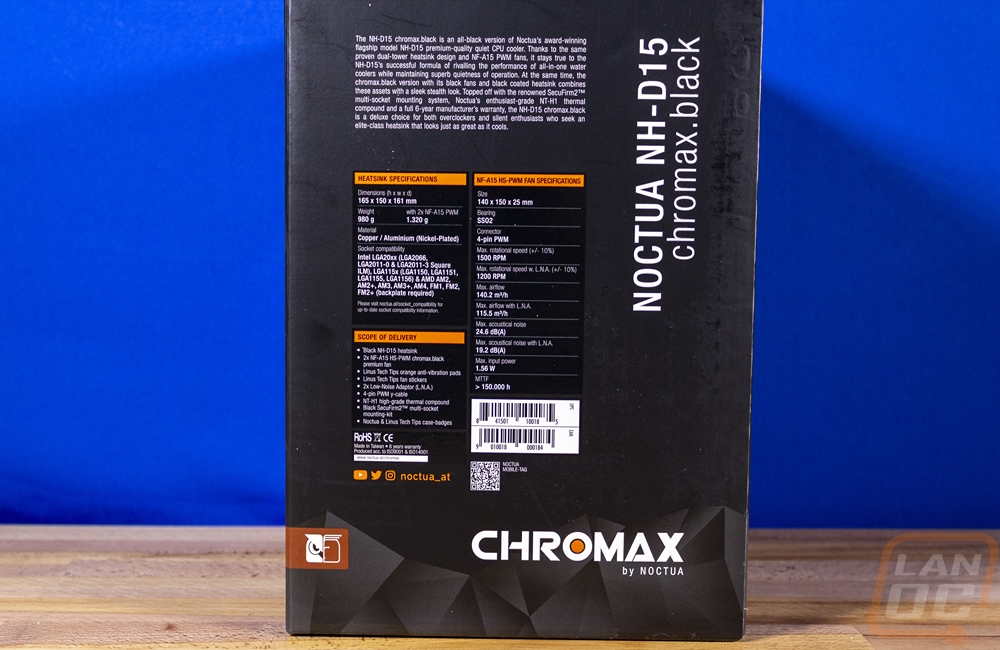 When you open the box up you will find a box right on top that comes with all of the accessories. Noctua even includes a list on top with pictures so you know what to expect as well and it has the LTT branding to indicate they also slipped the orange pads inside. The D15 is unique in its packaging because it does use foam where Noctua was ahead of the game years ago in being sustainable with cardboard packaging (they even ship using shredded cardboard as well) but this cooler is large enough they must have had to step up the protection. You can see that the cooler, as well as the second fan, come in their own boxes with everything printed on them as well. 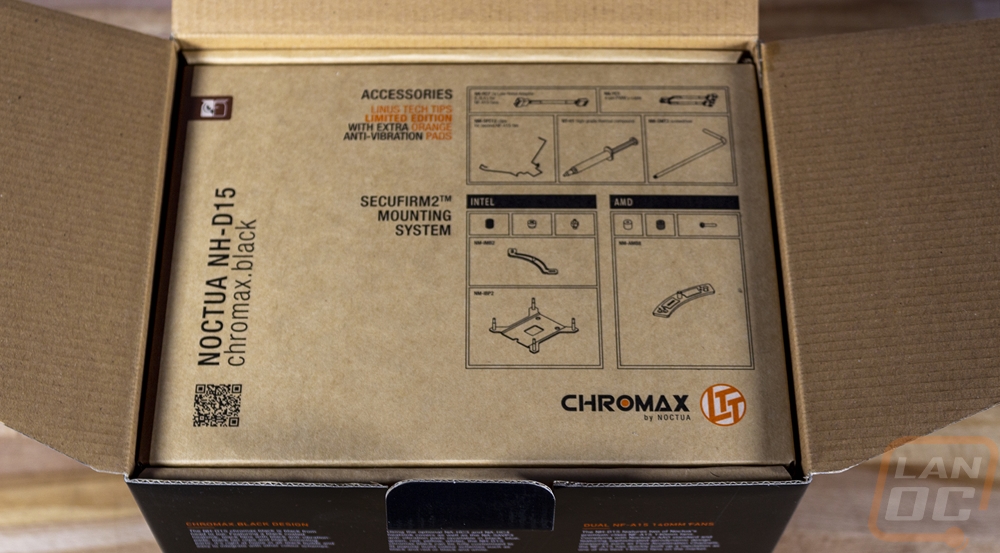 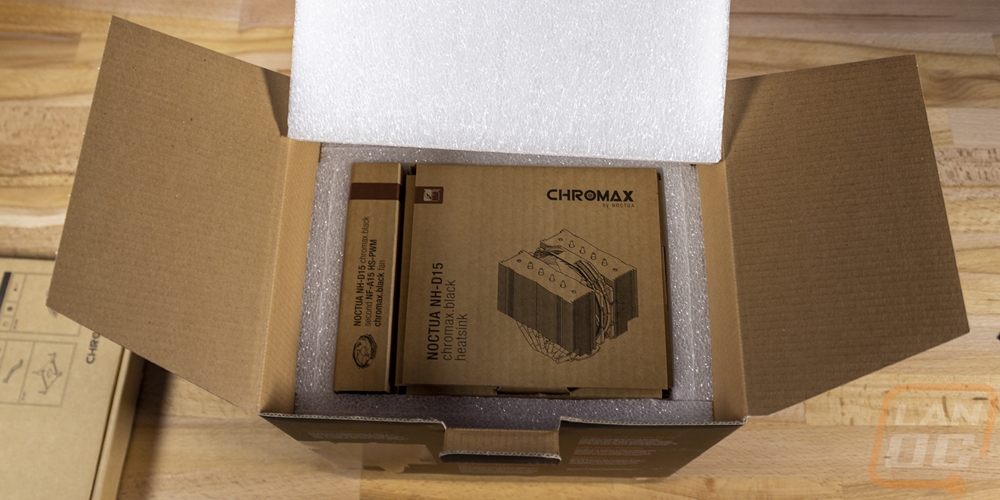 So when you dive into the accessory box the first thing you will find is the card with a letter from Linus from LTT talking about their partnership. Along with that, you get a bag with two sets of orange vibration pads for the two included fans. You get an LTT case badge and two stickers to put on the back of your fan to convert them to LTT editions. From there you get the standard NH-D15 accessory layout which includes the three different instruction manuals depending on what platform you are installing the cooler on. This splits up Intel’s mainstream lineup and their LGA2011 platform then one for AMD. This helps keep the instructions a little easier to read. Then the box has all of the mounting hardware split up. Intel is on the left and AMD on the right with the common parts in the bag on the bottom. That common bag is where you will find part of what sets Noctua apart from other companies. You get a full tube of thermal paste for one and they include a Noctua case bad that is thick and made of real metal and looks almost hand painted. You get an LNA or low noise adapter for both fans that slow down the fan speed and a splitter for the dual fan setup. They also even include a long screwdriver so you get everything you need for the installation. The only thing different with all of this compared to the standard D15 is that the brackets and the screws are all blacked out just like the cooler. 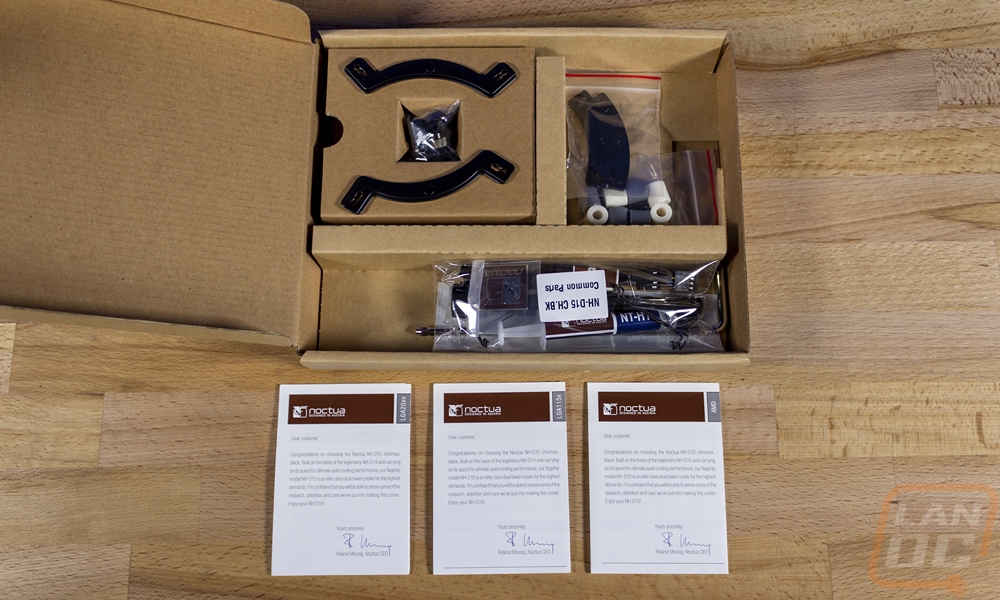 Now the NH-D15 is a tower configuration and the D15 name indicates that it is a 150mm cooler but most of you may already know that isn’t a common fan size. The two fans included with the cooler are Noctua NF-A15 PWM fans in the chromax.black configuration. The NF-A15 fans are a unique design from Noctua that actually uses 120mm fan mounting holes. It is 150mm wide and that is where you will see the four black mounting pads (orange is also included with the LTT version). Then the height is the standard 140mm height which you can see they pack the blades in as tight as possible in that height, so really this is a 140mm fan but the wide design allows it to push air out to that extra width to fit the 150mm cooler design. Like the other Noctua fans, each blade does have three raised strips on them to cut down turbulence and the back mount arms have a twisted shape and are sculpted to keep turbulence and noise as well. The A15 also has the SSO2 bearing which combined with the solid construction is always the first things I notice when I handle Noctua fans, they spin so smoothly. The cable is your standard Noctua cable with that wax-like sleeving that they use and the black finish is standard for them. The black on the fan, on the other hand, is the big change here and Noctua also didn’t slip in their brown with the vibration pads this time around. 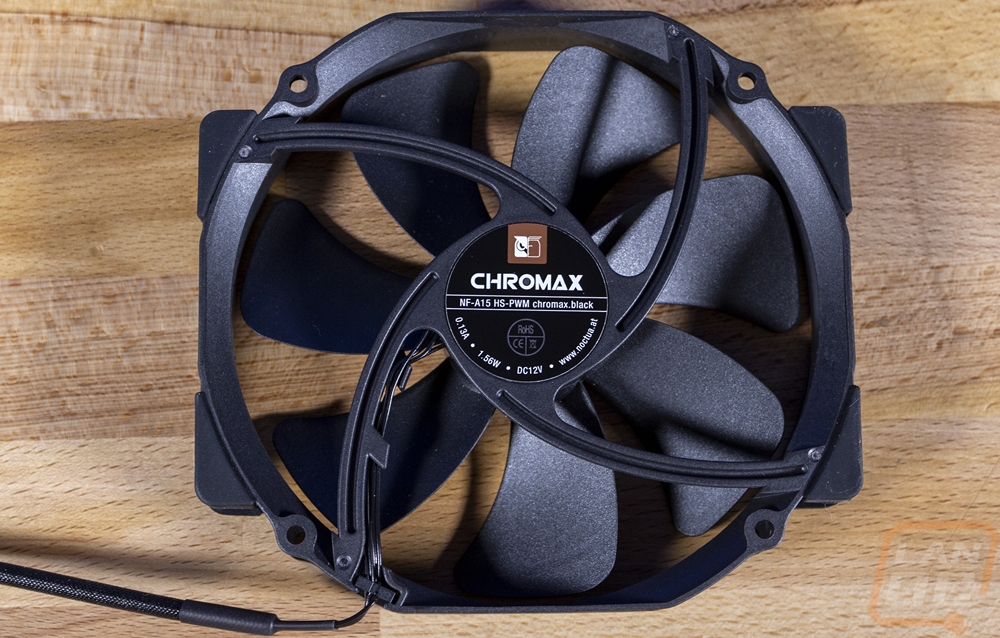 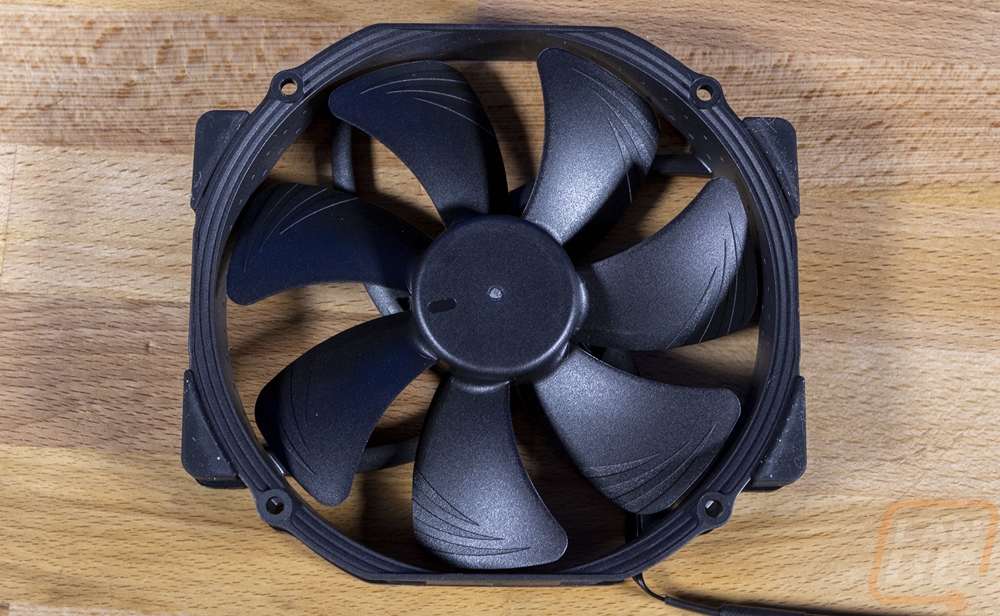 Even just looking at the bottom of the NH-D15 in comparison to the NH-U12S that we just took a look at you can see the difference in size and cooling capacity. The D15 has 6 heatpipes which pull double duty by having the CPU contact surface in the middle. You can see that you can’t fit anymore heatpipes over this size contact surface. All of the brackets and heatpipes, as well as even the bottom of the cooler with the exception of the machined contact surface, is all finished in black. The six heatpipes then all spread apart before getting into the heatsink. The contact surface does have some blur to it, Noctua isn’t known for going for a perfect mirror finish on their coolers, they leave a slight machined surface. 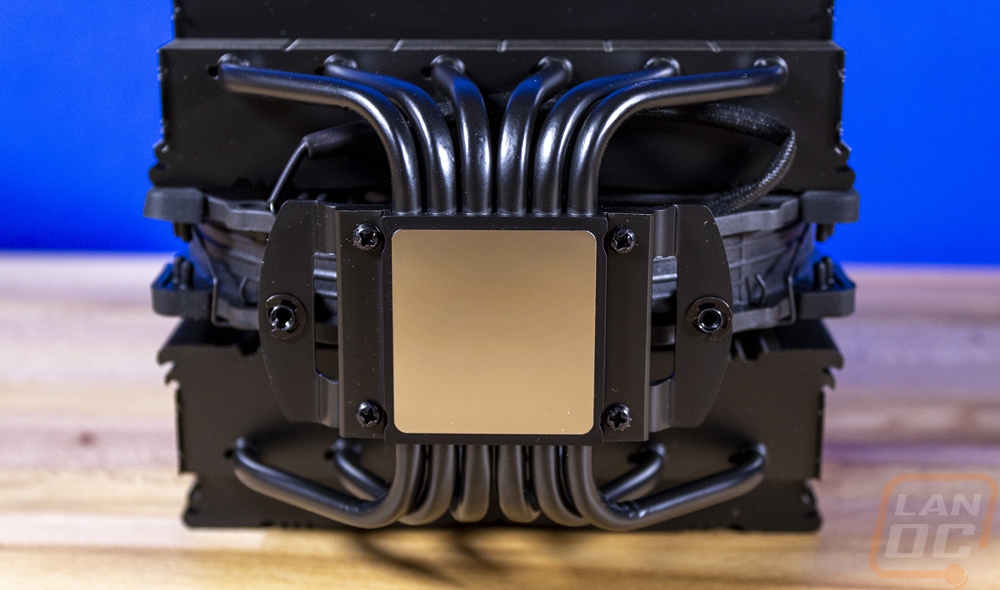 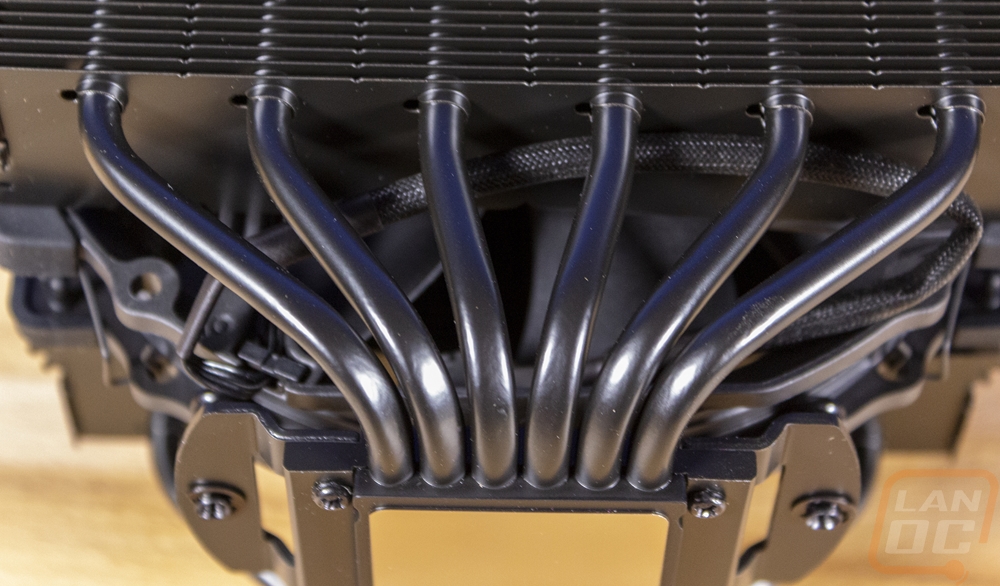 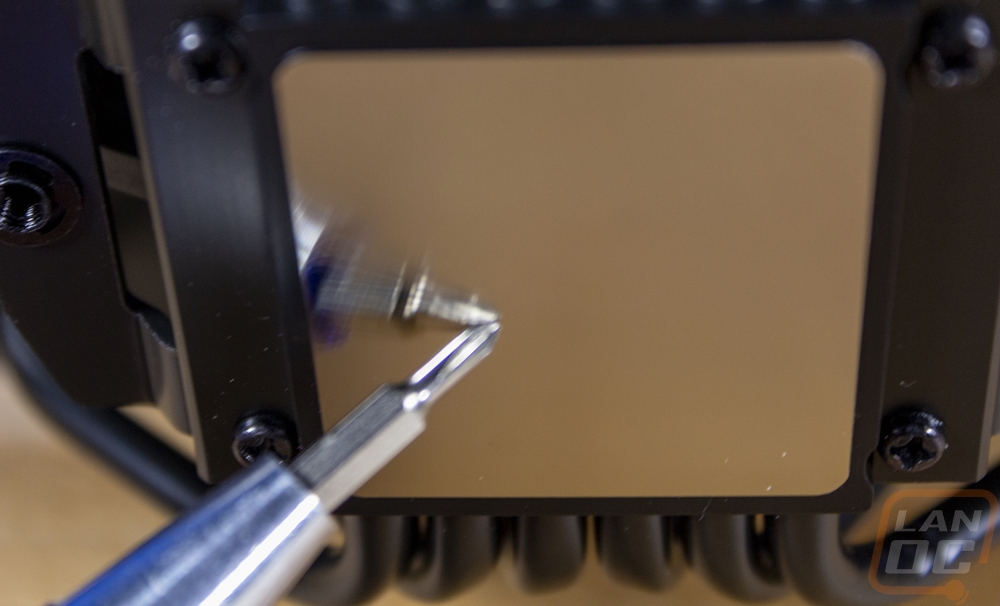 Like I said before, the D15 is a monster and changing everything to the Chromax.black finish doesn’t change that. It does, however, clean up the look of the cooler significantly. Every detail is black and it looks amazing. So the D15 is a dual tower cooler, each of its towers are nearly the same thickness as the U12S and they are wider and slightly taller as well. The towers are split apart with room for a fan in the middle as well as a gap between the fan and the second tower. Both fans are attached with Noctua’s easy to use metal clips. I don’t know how it is their design works so well, but any other company that uses a wire mount like this ends up being a complete pain to install or remove the fans. Both fans are taller than the heatsink, even with their wide and short design. So you can see them sticking up to the peak of the heatpipes on top and then down well below the bottom as well. 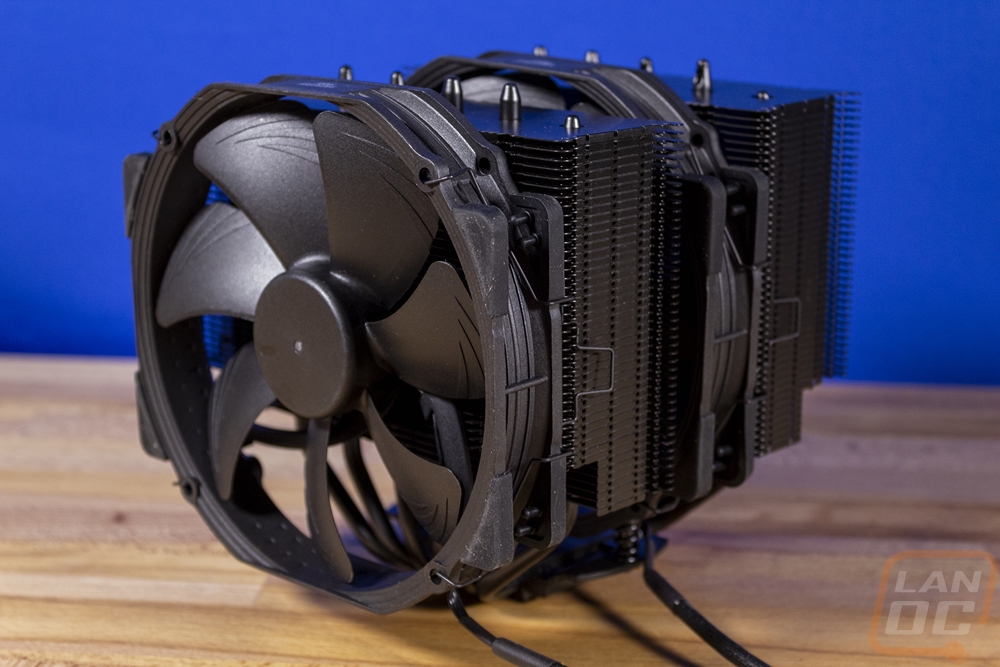 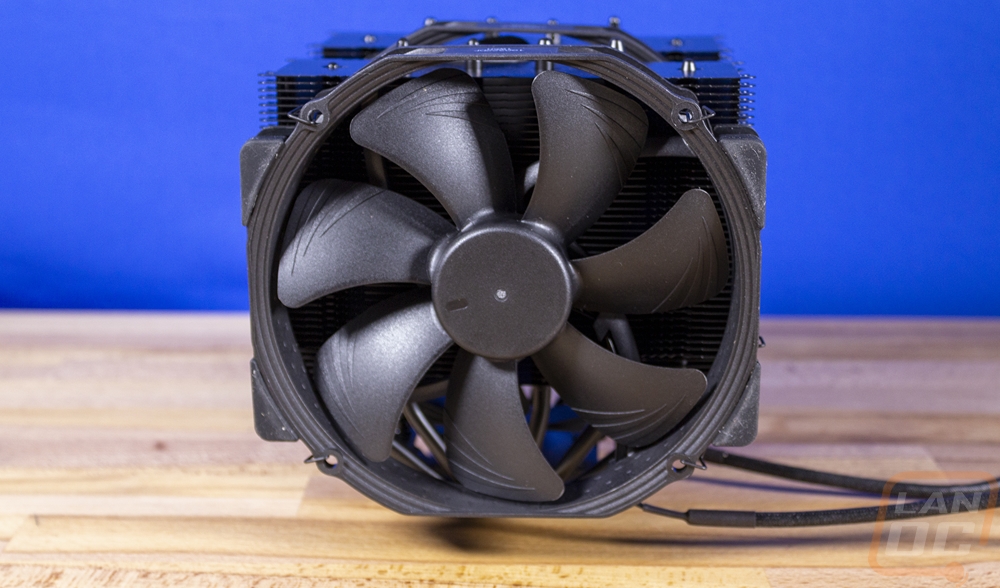 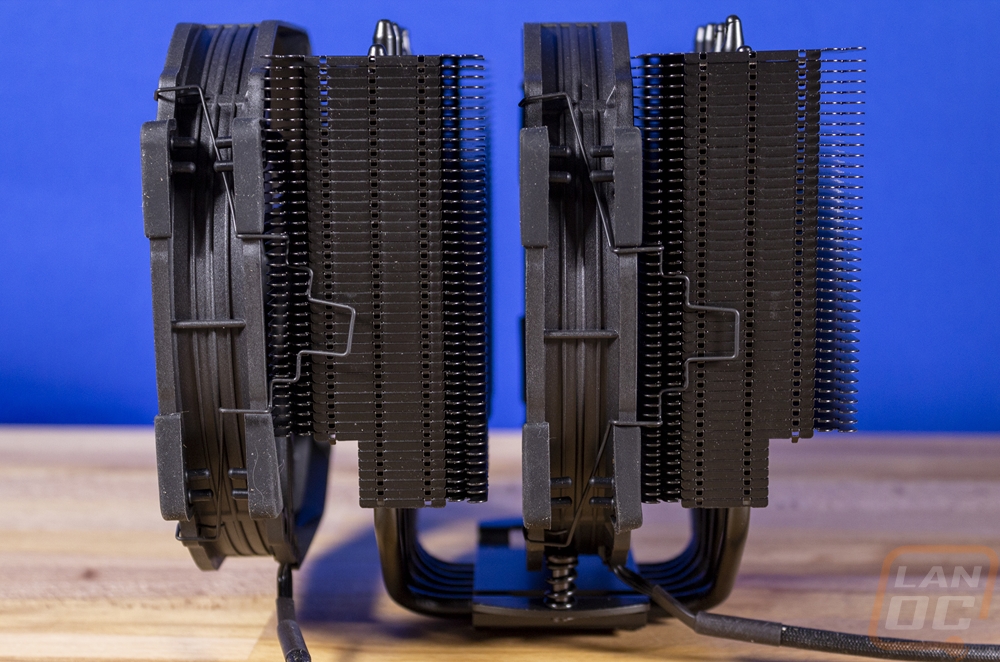 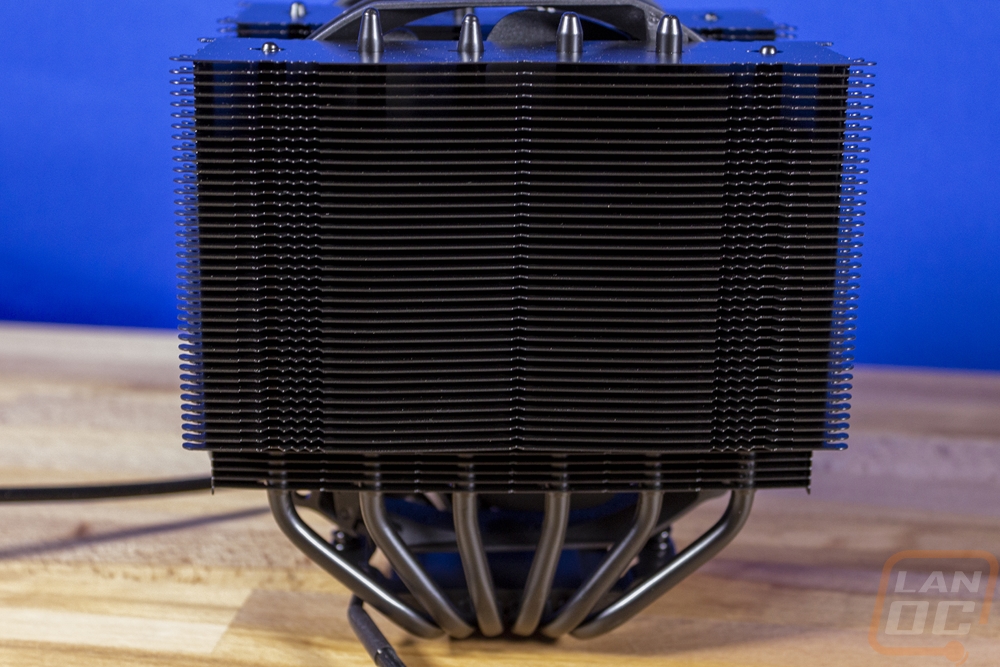 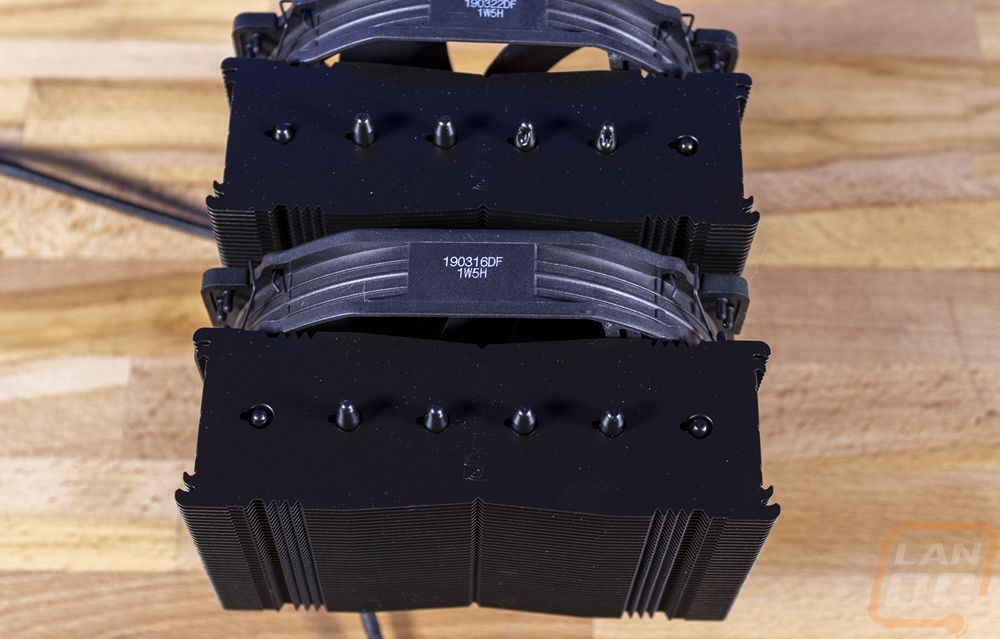