Like the L9i, the NU-U12S chromax.black has its box all decked out in black. There is still a sliver of that Noctua brown with a stripe on the right. I love that the box has a full photo of the heatsink right on the front to let you know what you are getting and to show that this one is a little different with its black finish. The model name is the prominent font with the Chromax black branding just under it. This is one of the early LTT edition models as well which gets the orange trim as well so that is highlighted under the name in text and with the LTT logo. Around on the back, the box does have a specification breakdown for both the heatsink and the fan which includes the dimensions which is great for anyone shopping in retail. They mention ram compatibility and the classic tower design on the back as well right next to another photo of the U12S. 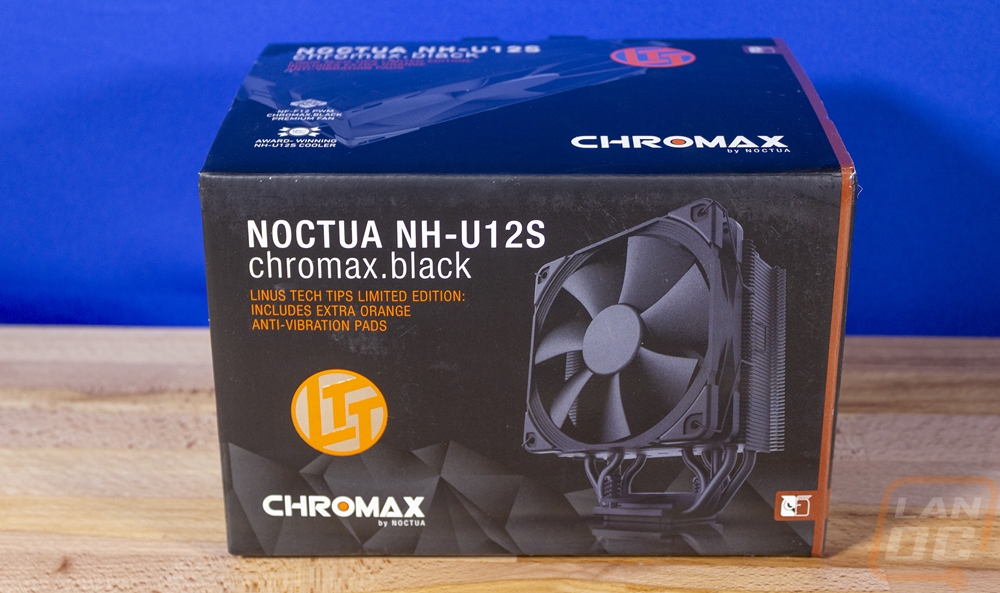 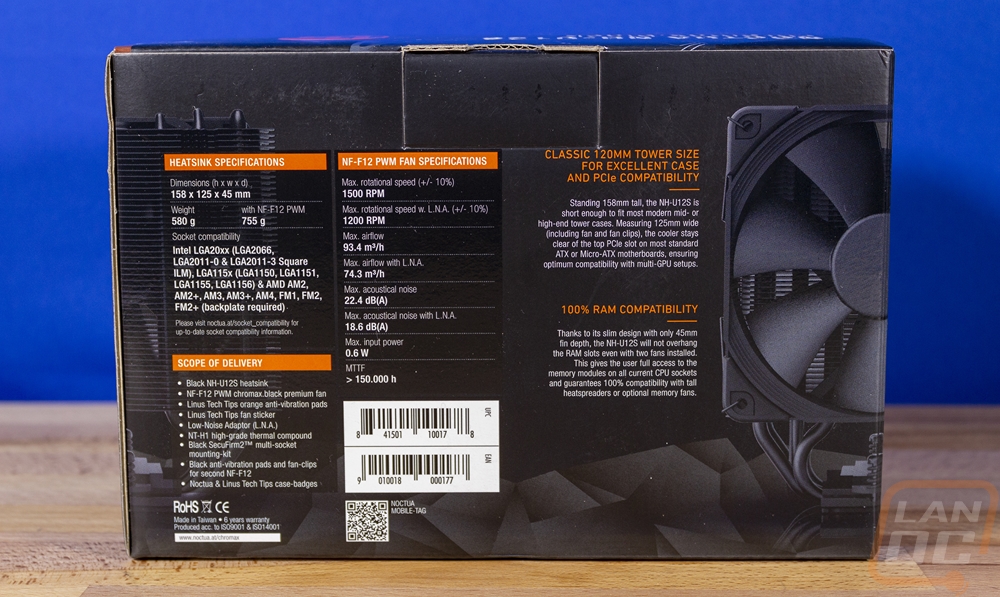 When you open the box up, right up on top they have a smaller box for all of the brackets and accessories. Noctua does this on all of their full-sized coolers and it is needed considering how much they include with every cooler. 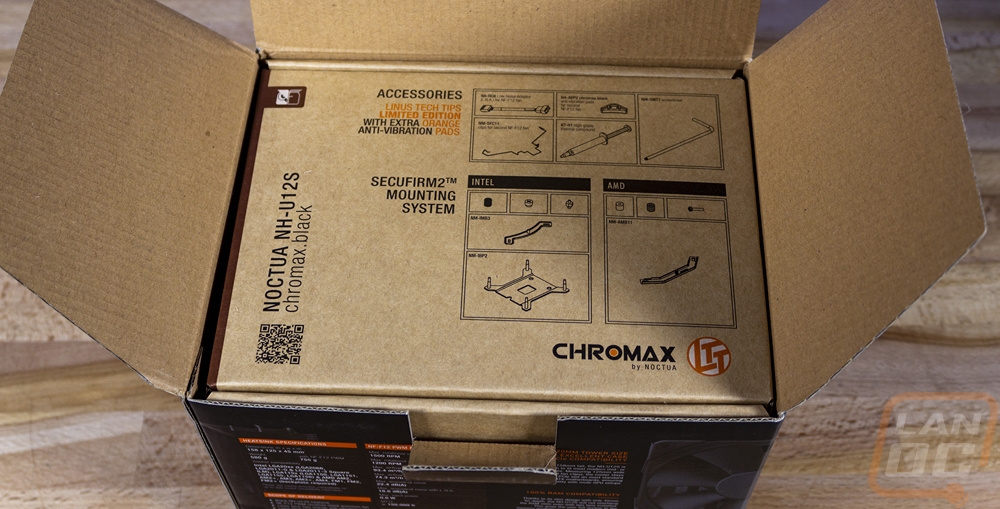 Here is everything extra you get when you get an LTT edition. It comes with a nice color printed card with Linus’s signature and a bag with the orange vibration pads to replace all of the black pads that come on the fan. I really wish orange was one of the normal Chromax colors, I’ve wanted/needed orange pads for years now. So if you want them, snatch them up while you can! You also get an LTT sticker and an LTT edition sticker to put on the fan as well.

So what else does the U12S come with? Well for documentation there are three folded up installation instructions. One for AMD, and then one for each of Intel’s platforms. Keeping the instructions split up like this does help keep the instructions clear. You get a backplate for Intel's mainstream platform. Then there are two top brackets, one for Intel and another for AMD. Both cover more than one size including 2011 for Intel and AM3 and AM4 for the AMD bracket. I love that Noctua also blacked these out as well, they are normally chrome so this is a nice touch. The smaller bags have the plastic standoffs and thumbscrews for the installation as well. There are also a few more black rubber pads. Then the common parts bag gets you another set of fan mounts for setting up a push-pull configuration and the LNA or low noise adapter that slows the fan down. They also include a full-sized tube of thermal paste which is a LOT more than almost any other cooler comes with. You will be able to install this cooler multiple times. The third picture below is everything I need for our AM4 testing configuration, AM4 uses the stock backplate. Notice the screws are also black as well.

So the NH-U12S design is very familiar for me. I’ve been using multiple U12S’s on our test benches and in a few builds as well. This is about as average tower cooler as it gets from Noctua. That includes their Noctua NF-F12 PWM fan which has also gotten the chromax.black treatment here. This is their standard 120mm fan, which average by Noctua standards is a big step above most other fans. That includes their SSO2 bearings and a more solid construction that combined makes a really smooth vibration-free feel when you pull the fan off and spin it. The NH-U12S is as I mentioned a tower design and to match the 120mm fan the entire layout is set to match those dimensions. It has 5 heatpipes that pull double duty running up into the cooler on both sides to pull the heat from right over the contact surface (over not directly on) and then up both sides. Those five are bent to spread them out as well with a 2-1-2 layout on both sides. The big change here is obviously the black finish. Noctua didn’t miss anything with every detail in black. All the way down to the mounting screws/springs and the top of the contact surface as well as the heatpipes as well. 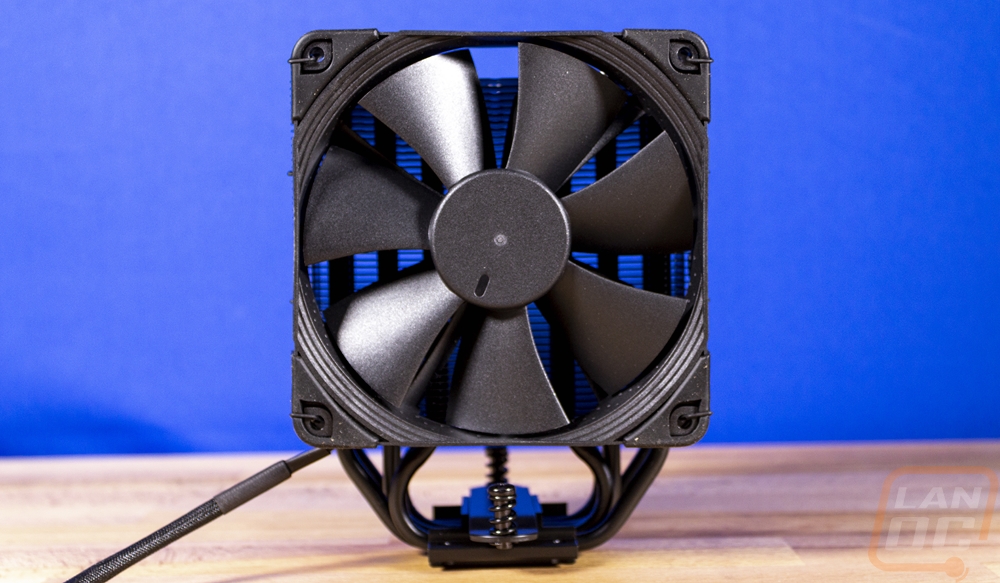 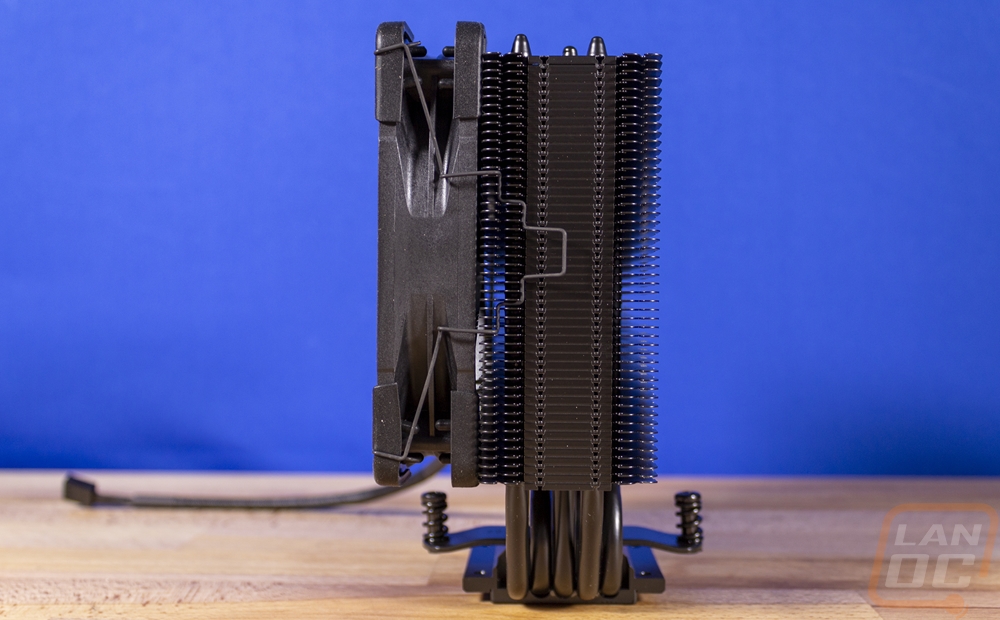 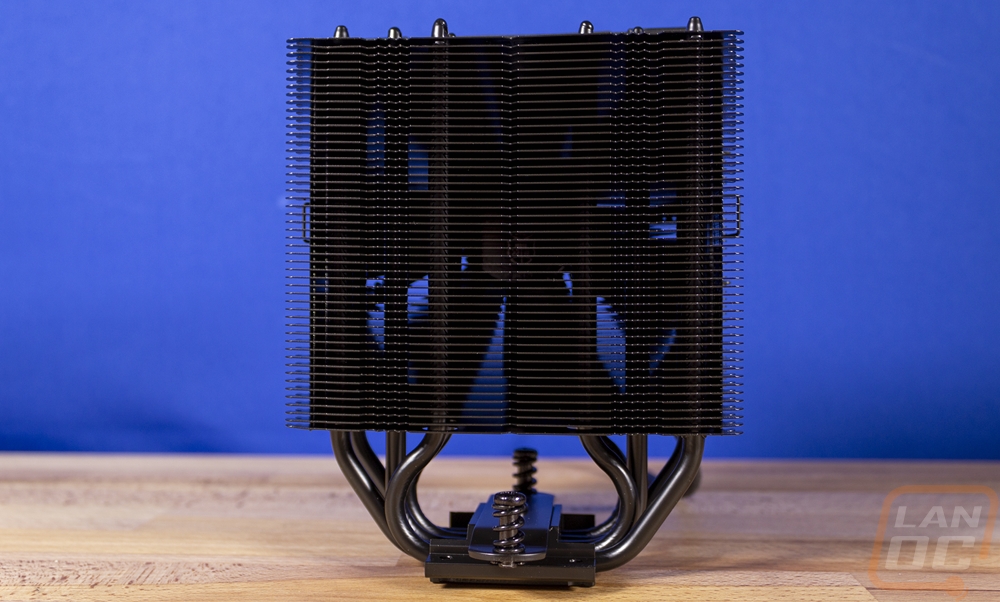 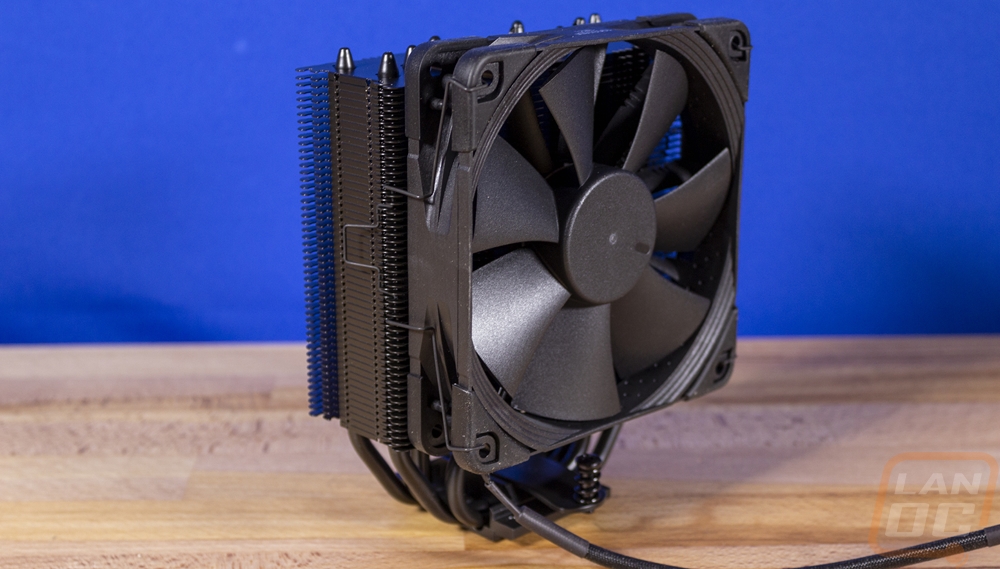 Here is a good look at that heatpipe configuration and you can see that the new finish looks amazing. 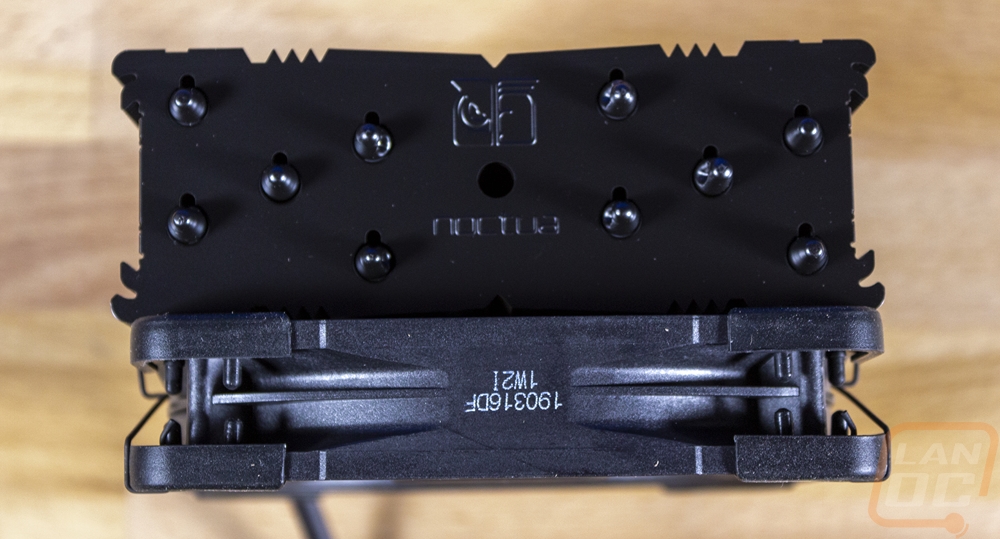 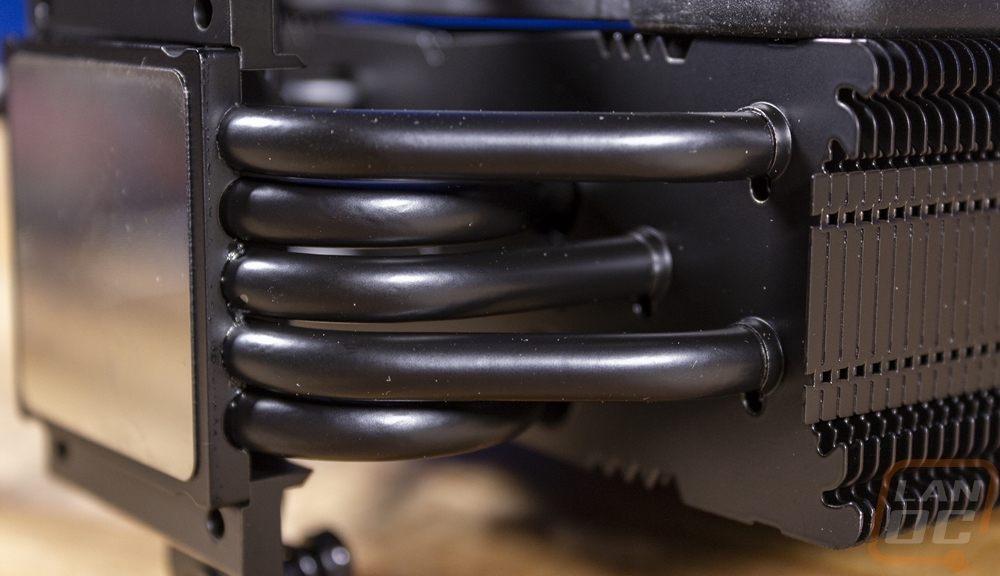 The contact surface is better than on the L9i with a little more of a mirror finish here and the tool marks aren’t as visible. But Noctua doesn’t go with a full mirror-like finish on any of their coolers, you can see some haziness in the reflection and some tool marks up in the top left corner. I do like how the black chromax finish does wrap around on the base here other than the actual contact surface. 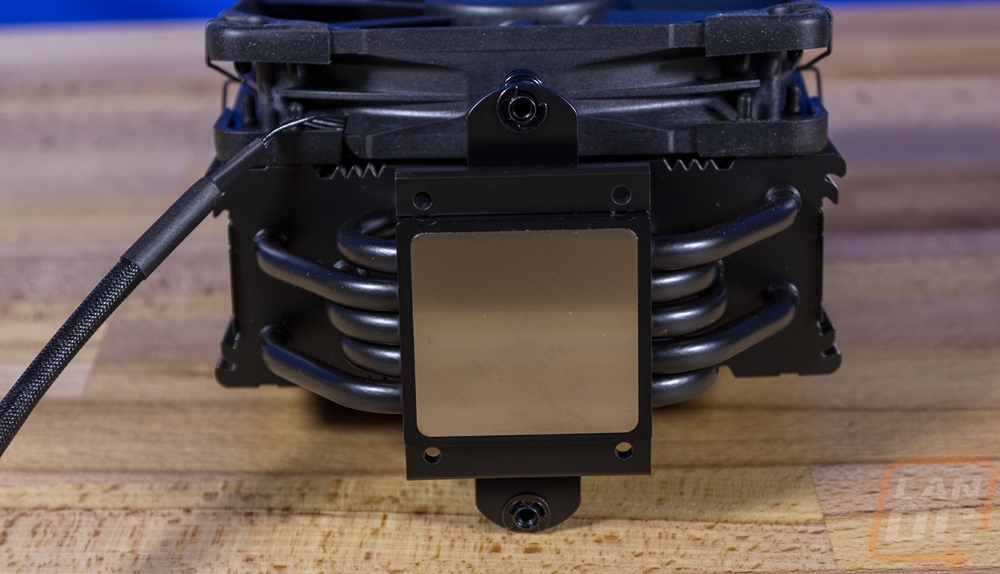 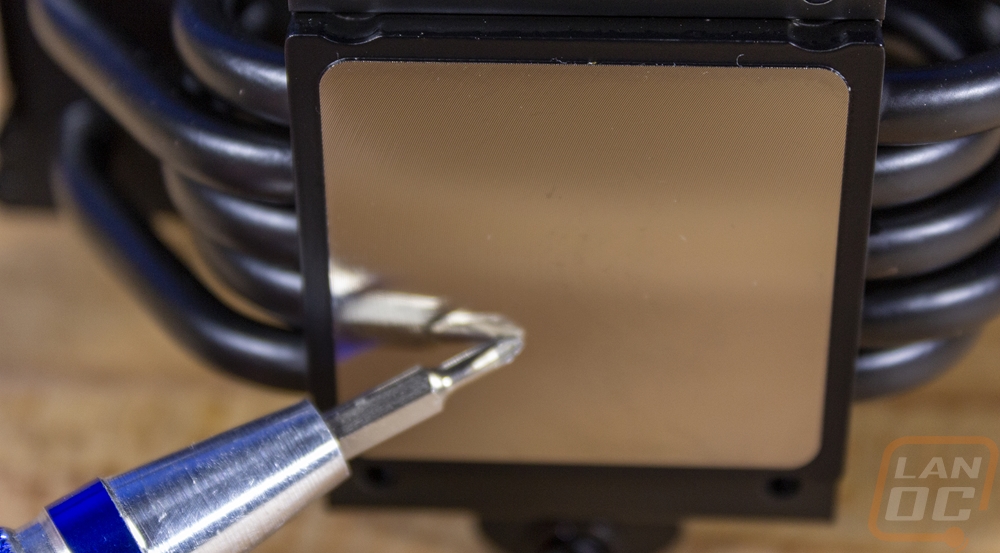 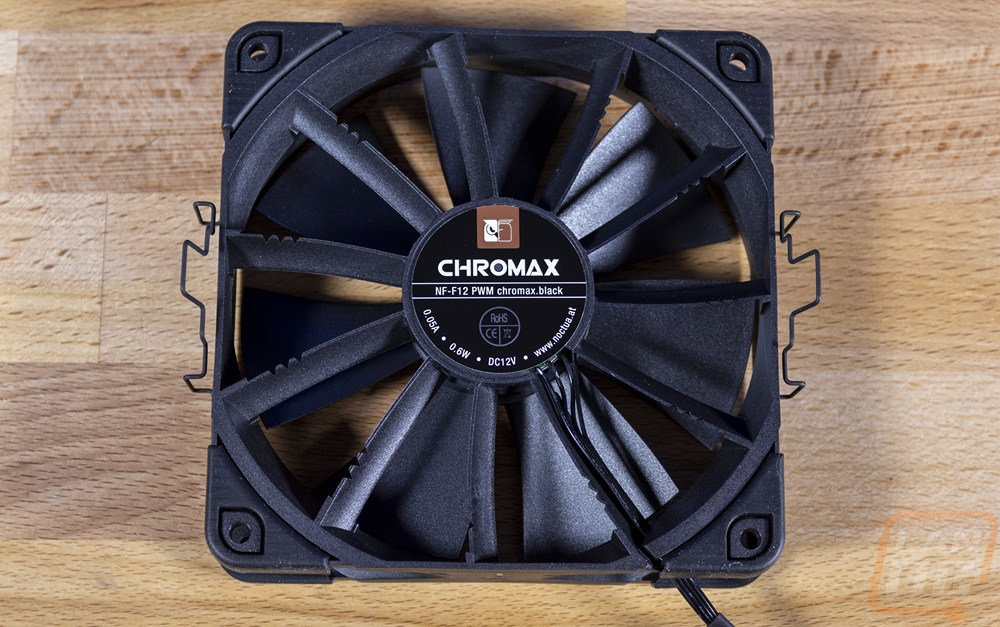 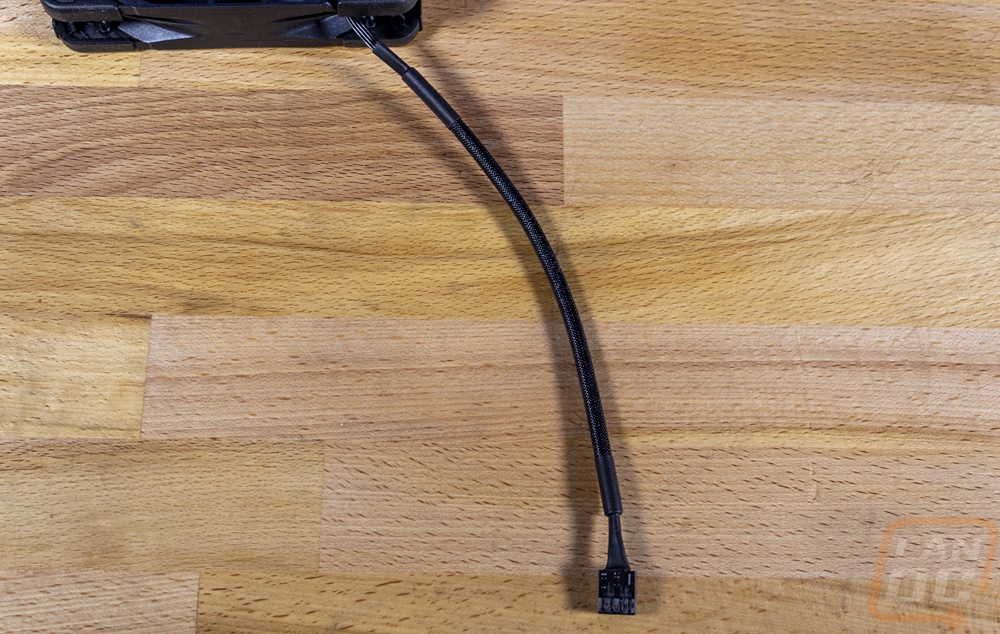 We have 1139 guests and no members online