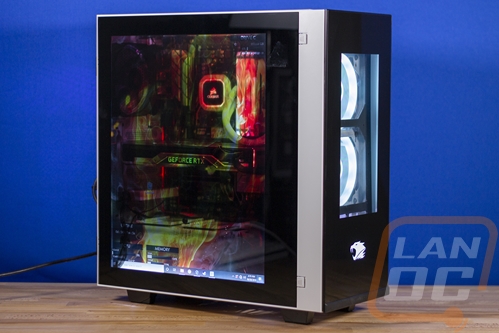 If the Snowblind name wasn’t any indication, the main housing for the Snowblind Element is bright white but this angle that shows the left side panel and the front doesn’t really show it that well. These are the two sides of the case that have tempered glass panels. Both of which are trimmed out in black. The left side panel is set up like a traditional case which is a pleasant change from other cases with a tempered side panel. What I mean by that is the case doesn’t use four thumbscrews to hold the glass panel on. In fact this side doesn’t use any thumb screws at all. There are two plastic clips towards the front of the case that have to be held at the same time to open the side panel up. Now the side panel window is the key feature in the Snowblind Element but when it isn’t powered up you would never know that. It has an LCD screen built into it which without the lighting turned on gives the side a tinted look. iBuypower also trimmed this panel out with the black to help cover up all of the areas you wouldn’t want to see when looking in. This is a don’t mind the man behind the curtain trick that you are starting to see on cases where the original tempered glass side panels on cases would show EVERYTHING. This included wiring and also even the edge of the inside of the case used for mounting. I’ll take this cleaner look every time.

Now the Snowblind Element with its glass front and side panels is clearly not a big airflow case. This was one of the downsides to the move to tempered glass, back in the “old days” acrylic side panels could get ventilation or even fan mounts. But you wouldn’t want to cut into that fancy LCD screen either. The look that the glass and the black and white theme gives is a simple and clean one. There is just the one white iBuypower logo on the front which is backlit and the two fans are visible as well. I actually think the case might look better with the front panel still slightly tinted, you get full view of the fans as well as the fan mouse and the magnetic mesh fan filter that sits in front of the fans. But I do like the simple look. 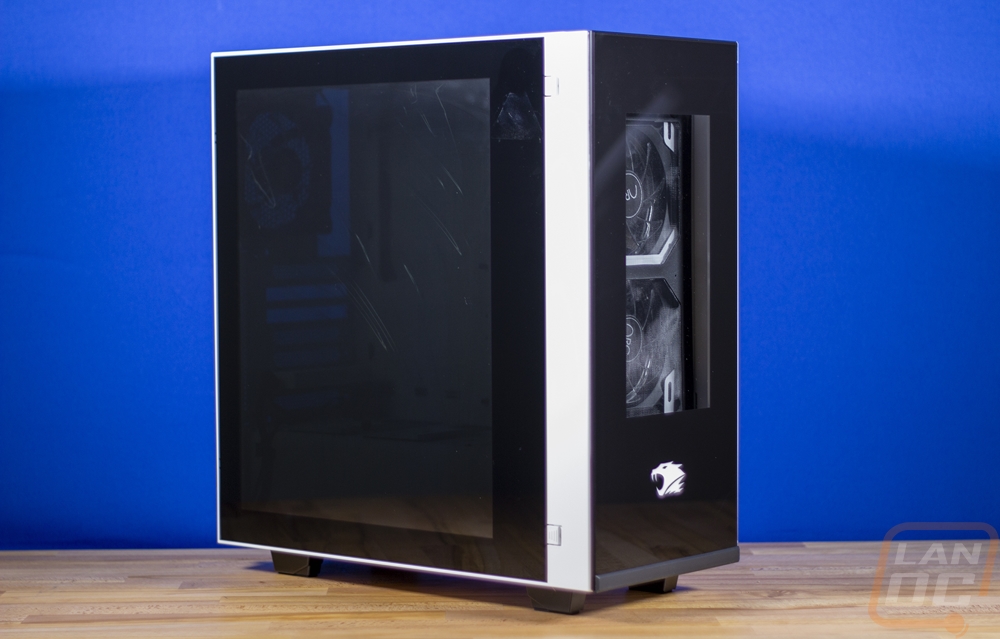 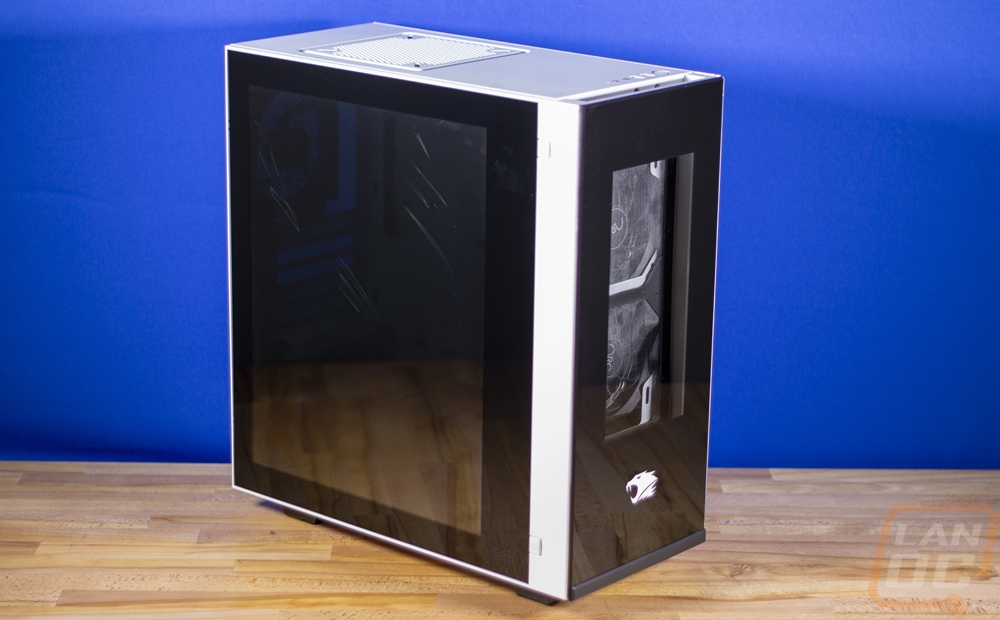 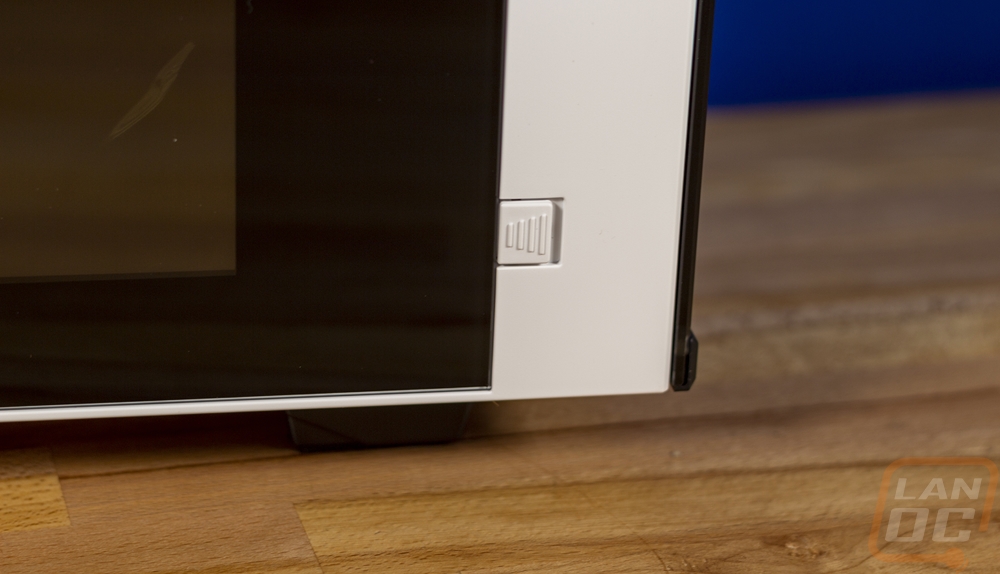 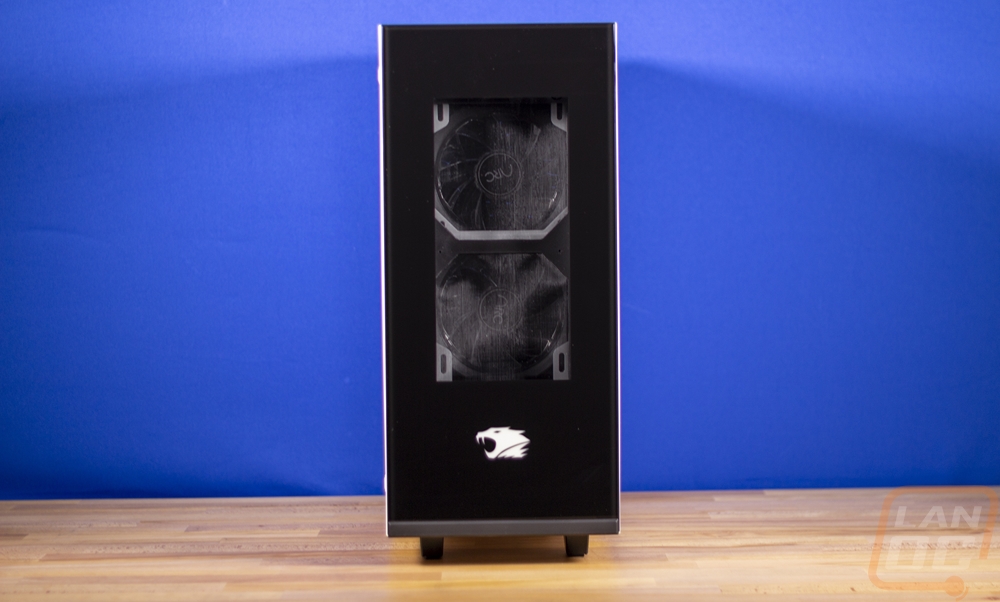 Around on the back of the case, we can finally see more of the white. The case is actually made out of SECC steel and that carries on around to the back. Back here we can see that it is a mid-tower case with its full ATX support. There are a total of 7 PCI slots but you will have to work around the LCD screen controller already using one of the slots as you can see with the DVI and VGA ports. I was surprised that our case came missing two slot covers, I mentioned earlier that the packaging looked disturbed so it could be that our sample had been used previously or it was tested before being shipped out. Both happen often, sadly this means you couldn’t consider our experience with the case as any sort of indication of reliability because if used or tested before the chances of there being an issue as much smaller.

Anyhow the back of the case has your normal rear I/O on the top left and a 120mm fan mount for the included exhaust fan just next to that. All of the PCI brackets are vented for a little extra airflow and the case also has holes above the brackets as well. Each slot comes with a black thumbscrew with a Philips head on top to give you the option to go it by hand or to use a tool. The brackets also have a slide up cover above them as well that will need to be moved or removed to install PCI/PCIe cards. Then down at the bottom is the bottom mounted PSU hole. The PSU is a bracket and is also held in with thumbscrews, which is similar to what I saw on the NZXT H400i. This isn’t a huge surprise, it is really clear that iBuypower worked with NZXT on this case and it is a variation of the NZXT S340 Elite with a few changes. One of the big changes is that the entire back panel is all white to match the rest of the case. Up at the top there is also a small black button that has been added. This is a manual shutoff for the LED lighting inside of the case. 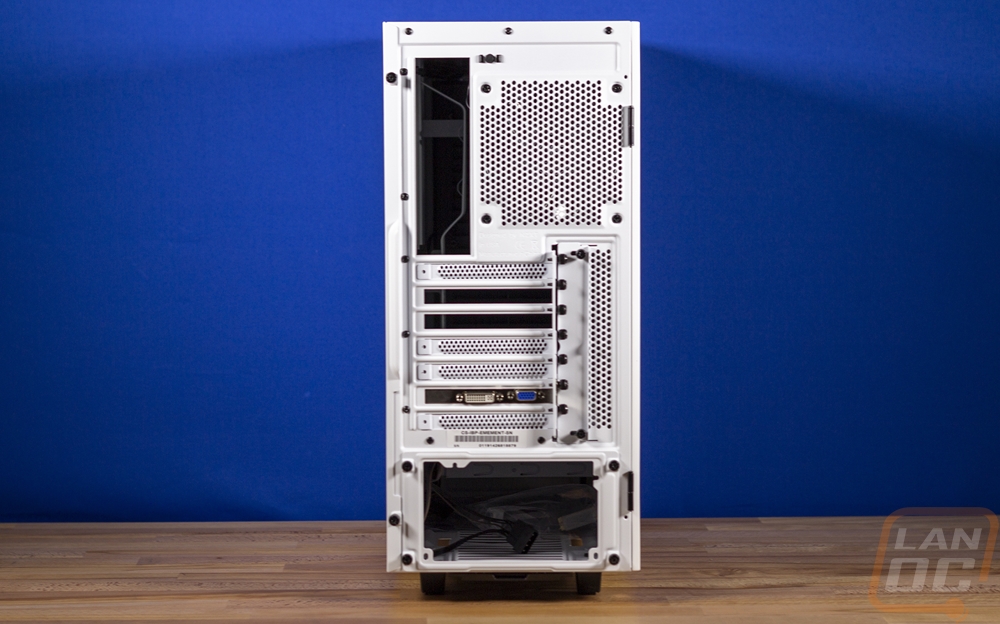 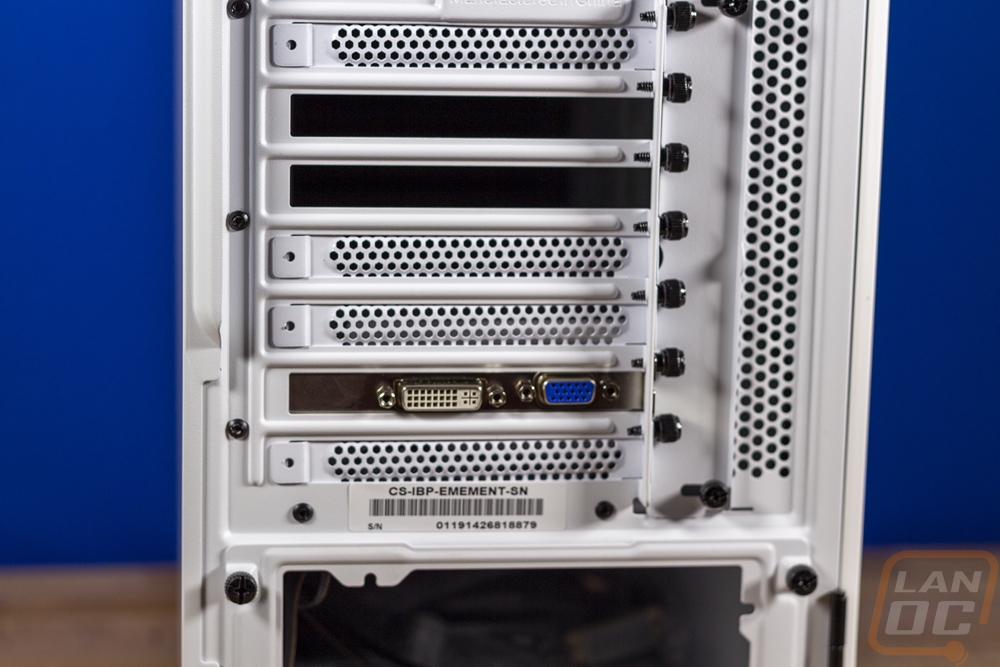 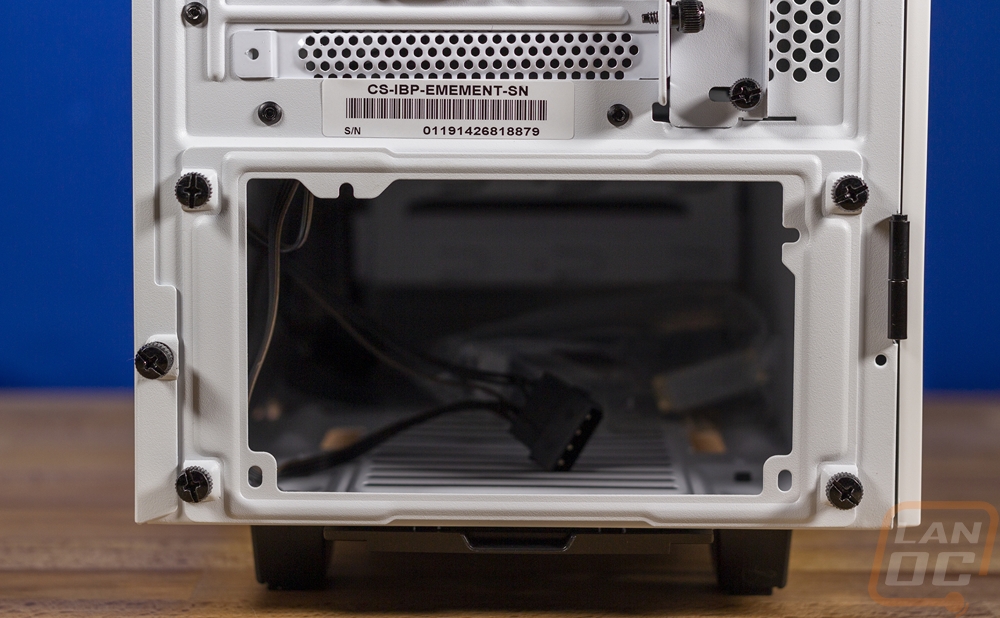 The right side of the case is about as different as it could possible be from the left side. Where the other side is black with tempered glass and an LCD screen. This side is bright white and all steel. It also doesn’t mount like the other side does. The left side is mounted like a car door where this is old school two thumbscrews and all of the clips on the side panel. You slide it on and off which is helped by the handle at the back. 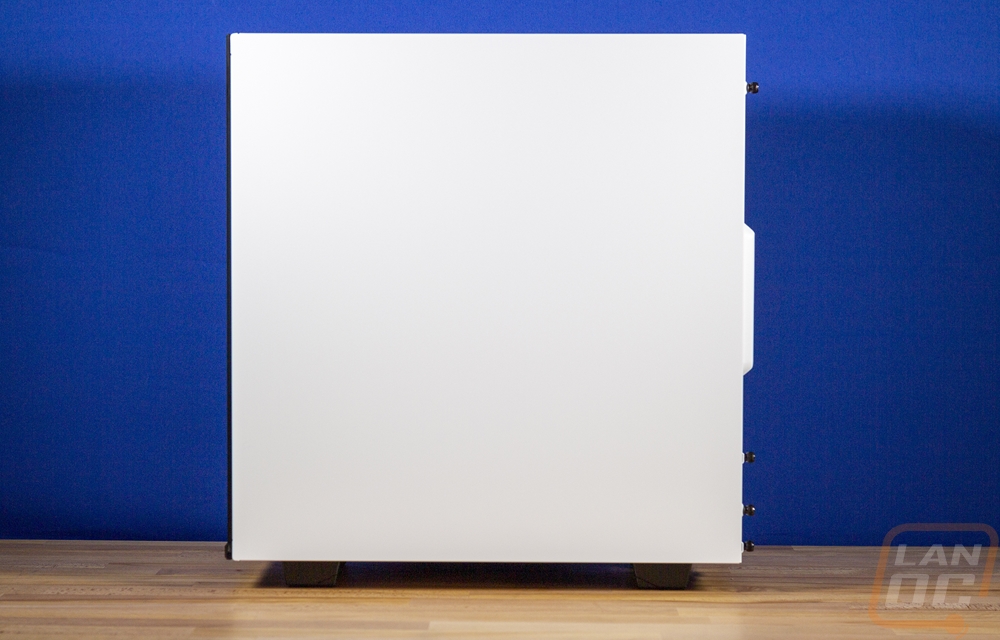 So up on top of the case, the front I/O is all the way as forward as you can go and it is also offset to the right as well. You get a white power button with an LED around it, then a hard drive status LED over on the other end. Between those, you have both microphone and headphone jacks and two USB 3.0 plugs. All of the jacks and the hard drive LED have legends under them in a light grey. The top of the case does give us some more clues to some of the ventilation of the case.  For starter there is a top fan mount that is slotted for 120mm or 140mm use. Then at the front we can see that the front glass panel does offer some way for the two front fans to breath. There is an inch deep gap between the front and the fans that run up to the top here where they can pull in air from. Of course, there better be a matching vent on the bottom and even then it isn’t really enough surface area if you are running two 140mm fans, but maybe it is closer if you have two 120mm fans which by the way is what comes with the case. 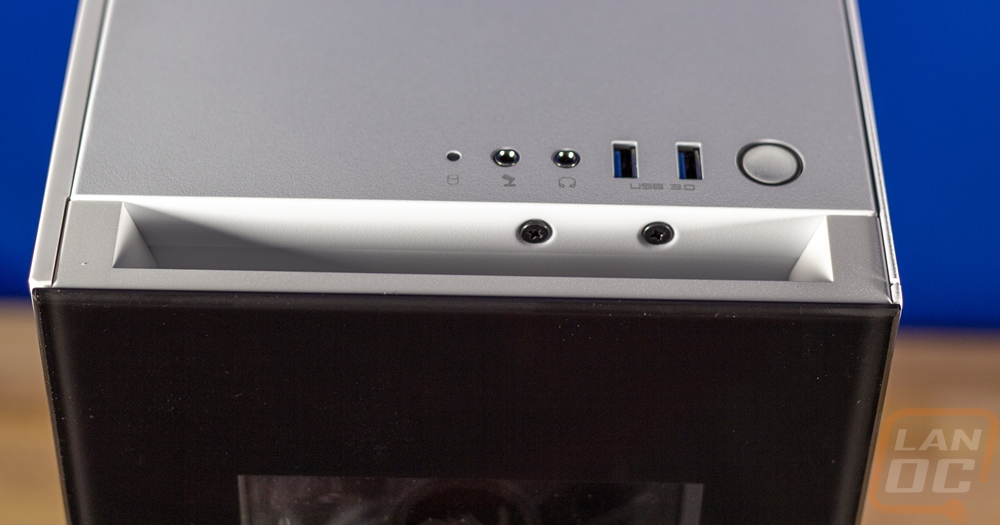 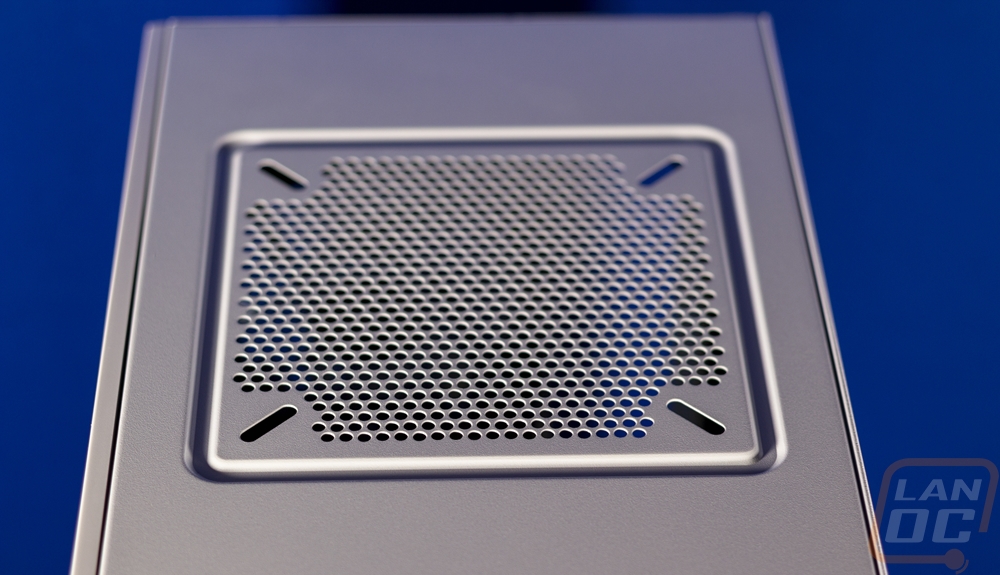 Okay, the bottom view of the Snowblind Element does show that slot at the bottom of the front panel but it is smaller than the one up on top both in width of the slit and depth. While down here we can see the PSU ventilation slots and the slide in plastic fan filter as well. You can access that from the back of the case. Which by the way, the front filter is held in with magnets and can be accessed from the top without pulling the front off. I like the feet, the case is rectangle-shaped feet that hold the case up a little higher than normal, which I'm sure your PSU will thank you for that. They are almost two inches long as well and have rubber on them so they should grip decently. 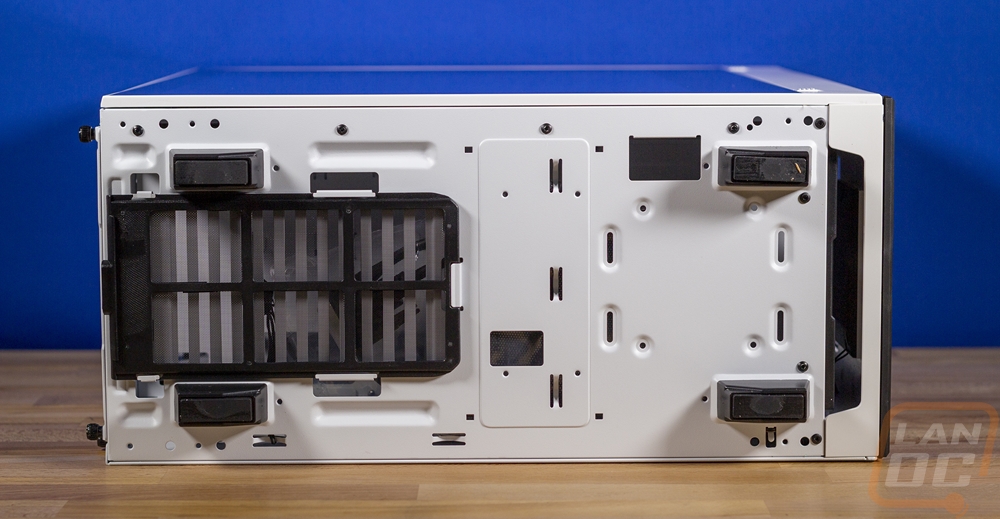 We have 780 guests and one member online