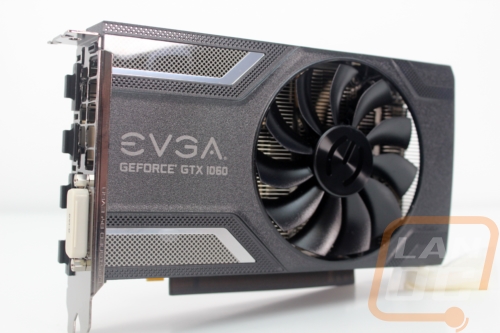 Well, immediately it is clear the EVGA GTX 1060 SC is nothing like the Founders Edition GTX 1060 or the Zotac 1060. EVGA went with a shorter ITX form factor for this card. It also doesn’t really pull too much from the EVGA 1070 and 1080 designs that had a lot of metal attached on their fan shrouds. This design is actually very close to previous generations with the black shroud with a curved up lip around the fan. They did, however, slip in two small metal grills over on the left. The silver grills are a small but nice touch that doesn't take away from the clean design. Even the fan itself is a little simpler than normal. In the center where most companies put their logo in bright colors EVGA has just etched their E and it is only visible from an angle. The single fan is a little smaller than the Zotac and because of that, the card is also a standard height where most of the cards are getting taller and taller. Given the ITX length and the normal height, this card should work really well in the extremely small form factor cases that have trouble with the “ITX” cards that use height to fit cooling. 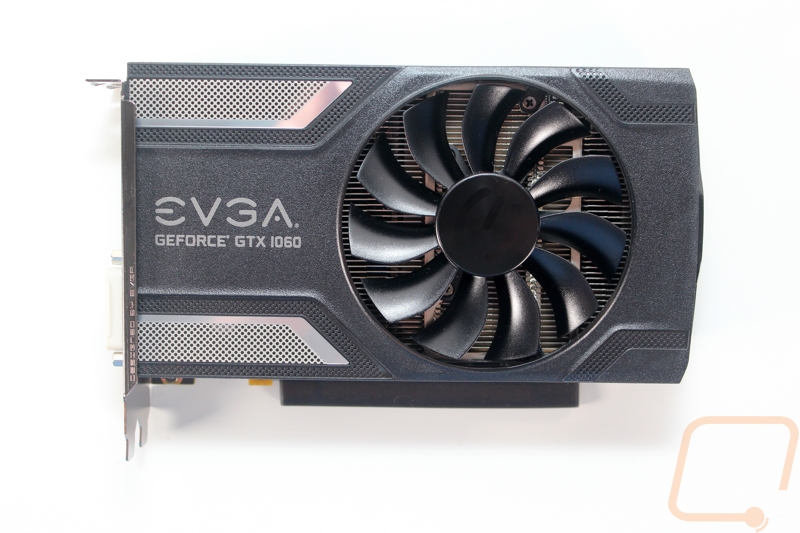 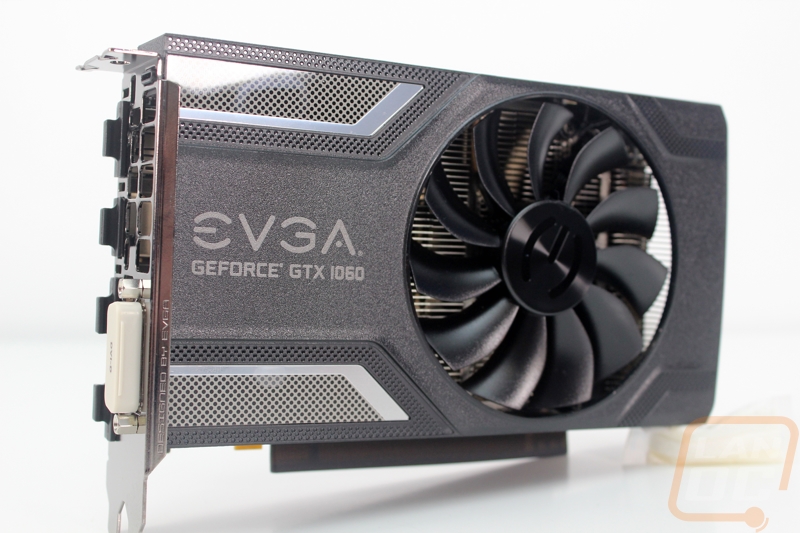 The cooler design on the GTX 1060 SC uses two copper heatpipes that run from over the GPU out towards your motherboard and then over to pull heat out into the left and right sides of the heatsink. The end view of the card shows us that the heatsink runs the full thickness of the card from the PCB all the way to the fan shroud. This might sound obvious, but a lot of cards don’t do this because they use universal coolers to fit across multiple products. You see this a lot with AMD and Nvidia cards using the same cooling solution but EVGA has no need to do that because they are exclusive to Nvidia. So while the card is short EVGA does seem to take advantage of all of the space they have. The single fan blows down onto part of the heatsink and out across the rest. The fan shroud is open on three sides for some of that warmed air to vent out in each direction. So while this is an ITX card remember it isn’t a blower design and some of the heat will vent into the case. 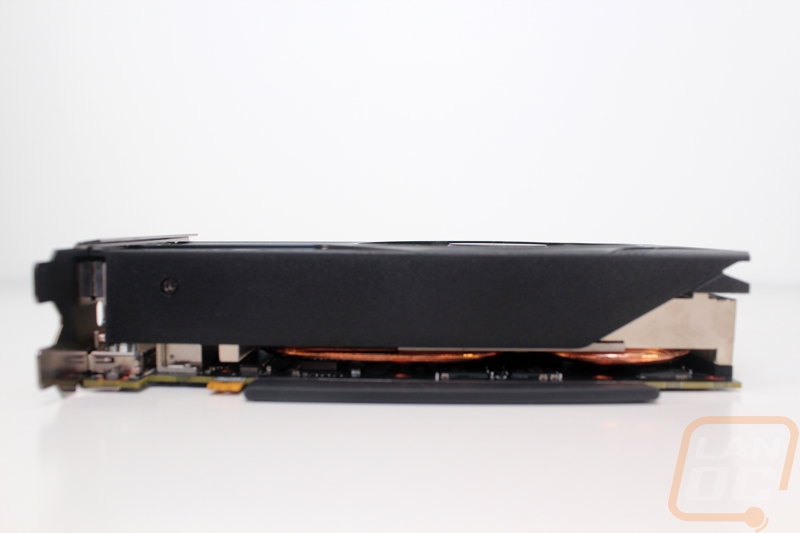 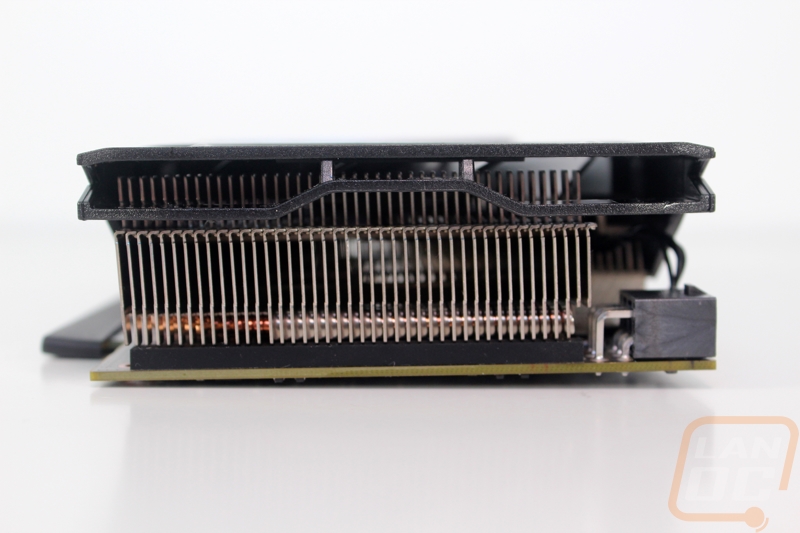 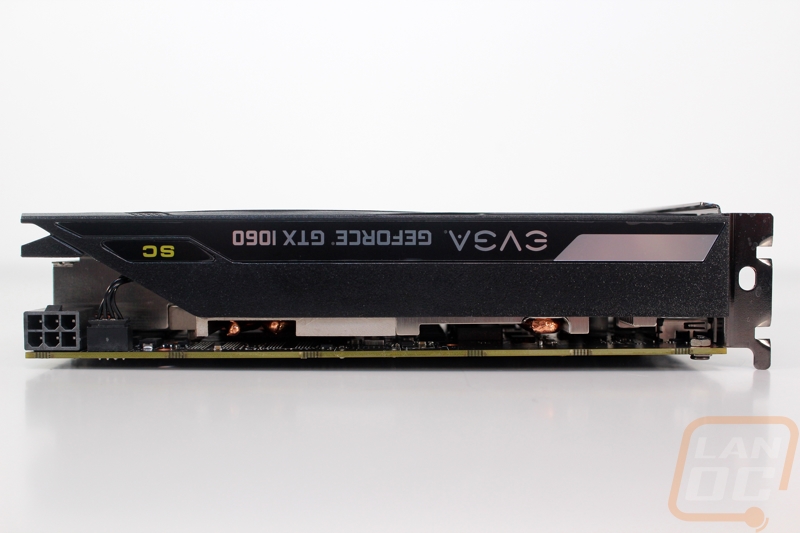 Up on the top edge of the card, EVGA did something that I really wish I would see more. Along with the EVGA logo, they actually put the entire model name up on the top edge. You used to see this more but now it seems companies avoid it to bring out multiple models with different overclocks without changing tooling. Well EVGA has two models of this card, one stock clocked and then this Superclocked card. The SC down at the end represents that. 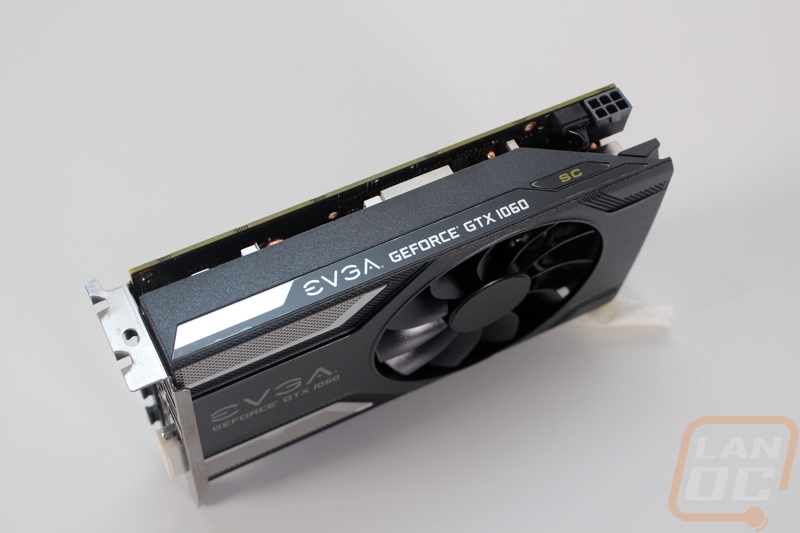 For power, the GTX 1060 SC has the same 6-pin power connection that the other two GTX 1060’s I’ve tested have. Even being the highest overclocked of the three shouldn’t be enough reason to need more than a 6-pin on the 120 watt TDP GTX 1060 GPU. EVGA also tucked their fan connection up next to the power connection as well. Unlike everyone else they did keep the plug in the traditional orientation and because of that their fan shroud and heatsink have been designed to leave room for fingers to get in around the plug to disconnect it. 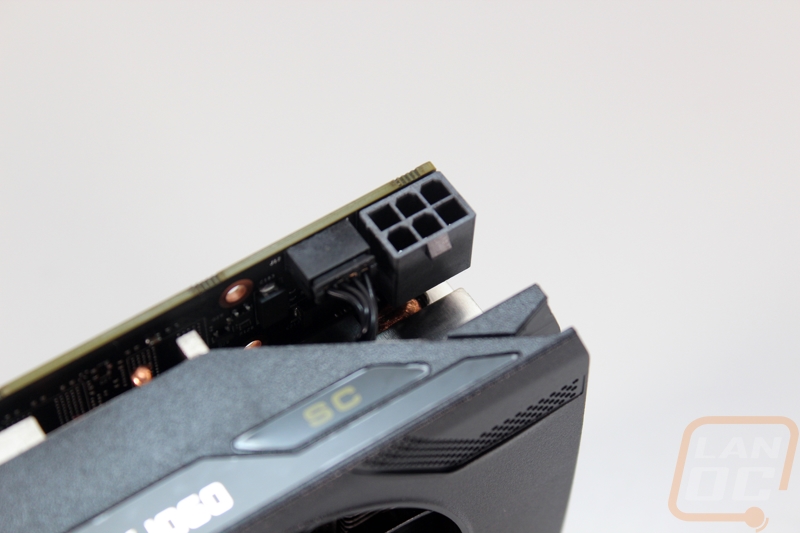 For the PCI slot cover, Zotac just used the same cover as the FE card, but EVGA went their own way. The card still has the same five connections. You get a DVI port, three DisplayPorts, and an HDMI connection. But for air ventilation, EVGA goes out of their way to cut much larger holes for more air flow. 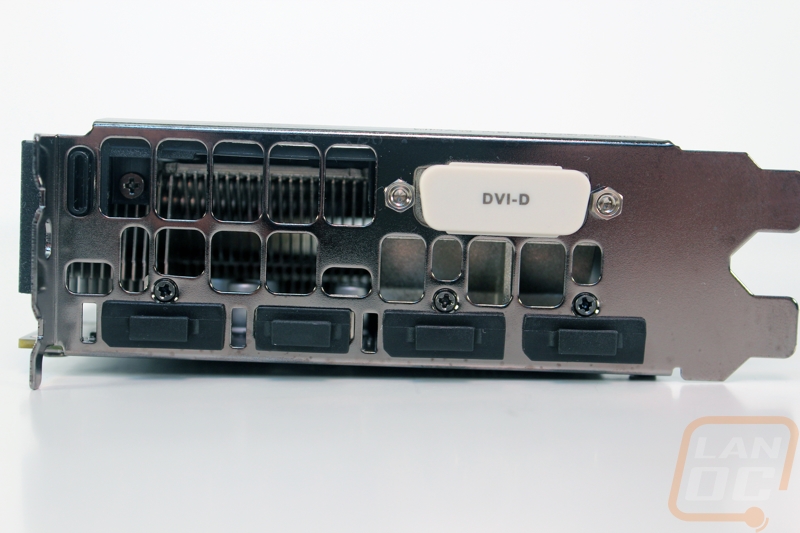 With the 1069 SC flipped around we have a good look at the black PCB. Unlike the Zotac and even the Founders Edition EVGAs PCB and cooler end up being the same length. Unlike the Zotac card the EVGA PCB actually looks to be almost a spot on match with the Founders Edition card with the exception of the PCB mounted power connection up in the top left corner. It even has the same large mounting points around the GPU that are unused here but were used on the FE card. 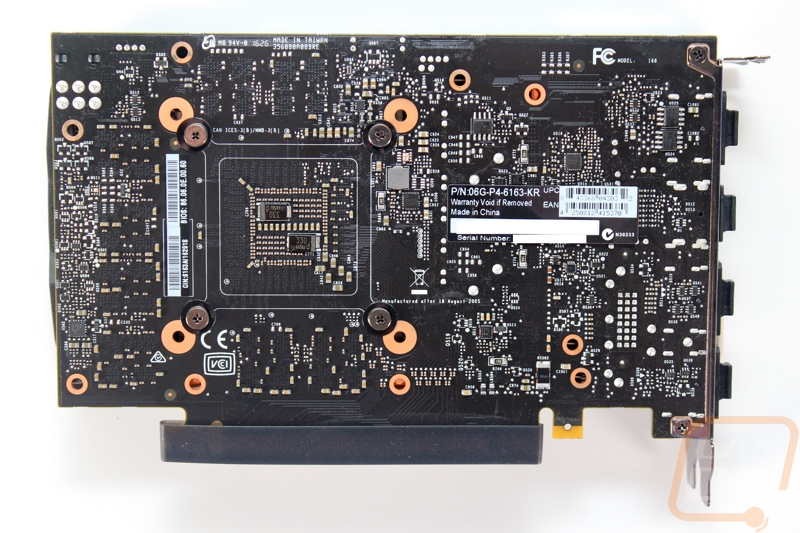 Like in my review of the Zotac 1060 I also got a photo of the EVGA GTX 1060 SC with the GTX 1060 Founders Edition. Here we can see that the PCB is the same length and height as Nvidia’s card but the cooler is considerably smaller. The blower fan on the Founders Edition card looks normal when you see it on its own but it looks tiny when you have these two cards next to each other. 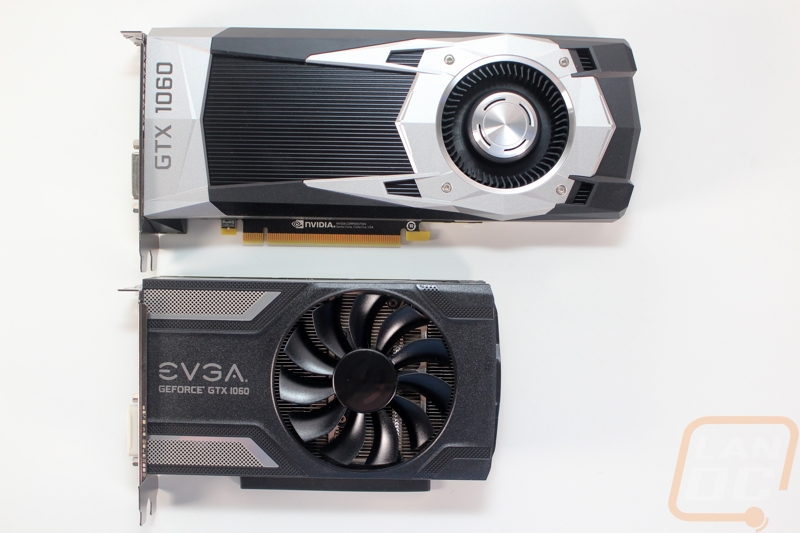 We have 970 guests and one member online