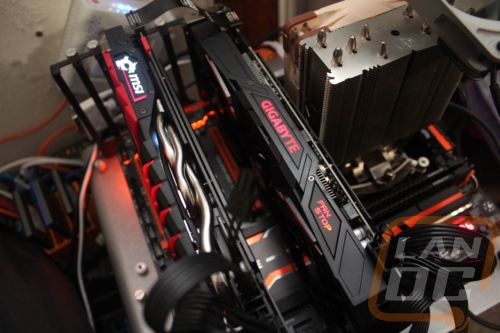 Well, I finally got my hands on two GTX 1070’s and you guys know what that means. As soon as I finished up writing about the second card, I jumped right into SLI testing. With the card availability being tough getting two matching cards might be tough, so before you do that I thought it would be good to see just how much you can benefit from running two cards. On top of that, I wanted to find out if you are better off getting a single GTX 1080 over the GTX 1070 pair. So I ran the cards through our normal benchmark suite. Unlike a card review, though, I jump right into the testing and for the most part I let the numbers speak for themselves. So hang on.


Our Test Rig and Procedures

Like I said in the opening, with SLI testing I don’t really go into detail with most of the results. That said I did want to address a few things. Unlike in the past, I didn’t include any SLI results where it was obvious that SLI wasn’t supported. I may regret this one and read the results in the future but my concern was that when I compare those results in the near future to other cards I didn’t want it to be confusing (aka lower performing cards looking faster than they are when you see a broken SLI result below it). That said here are the games and programs that didn’t support SLI or in some cases, SLI gave slower results than a single card.

-Unigine’s Valley Benchmark 1.0 supported SLI in the past, but with the GTX 1070’s it actually performed slower than a single card

-Catzilla 4k wouldn’t even open up at all when I had SLI turned on. I’m unsure if this was an SLI issue or a Catzilla issue, but I tried reinstalling drivers and the program as well. One time I thought I got it to work but it turned out I forgot to turn SLI back on.

-The weirdest of all of my tests was Ashes of the Singularity. In DX11, SLI was exactly the same as a single card. When testing DX12 I did see a performance increase with SLI turned on when also running the DX12 Multiple GPU setting to 62.0 FPS in 1080p and 45.7 FPS in 1440p. But turning off SLI and running the same setting yielded much better results as you will see in the graphs below. 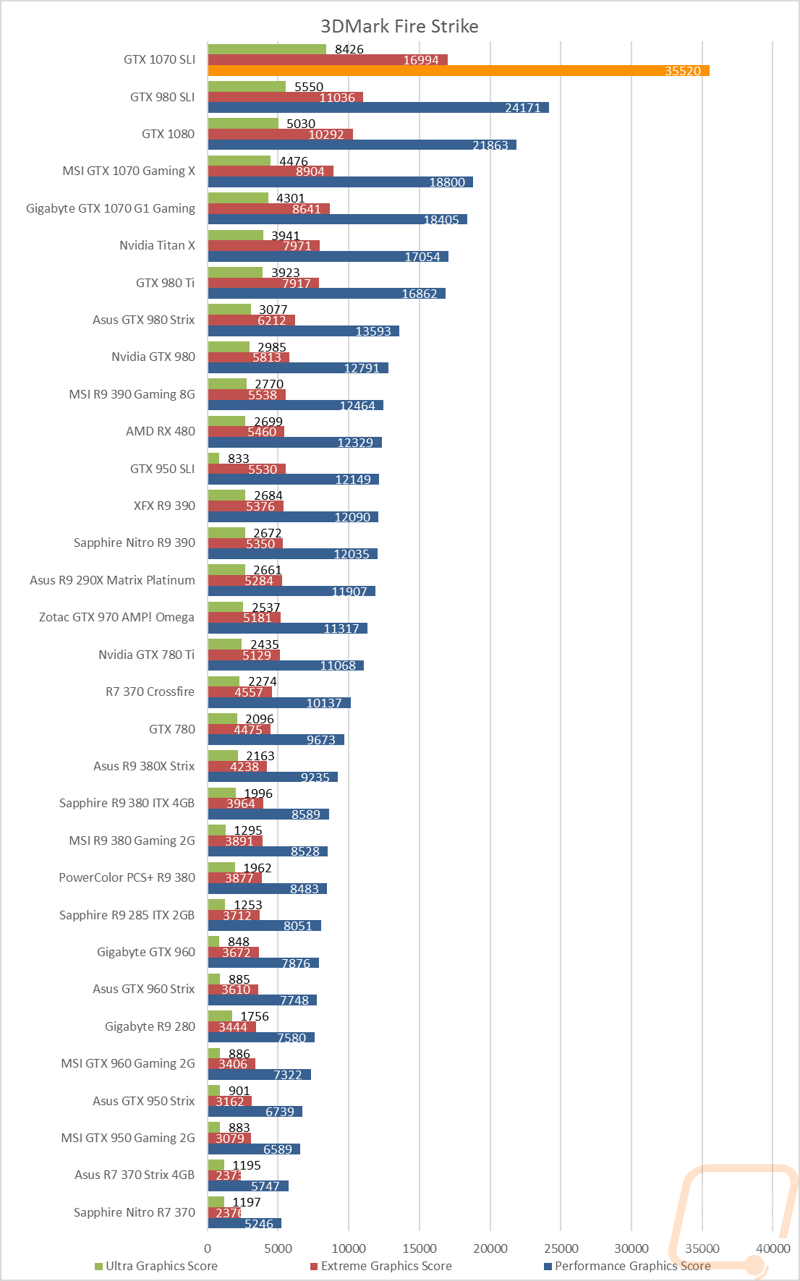 If you didn’t look at any of the benchmarks on the previous page, a quick look back at least at the 3DMark results of the GTX 1070’s in SLI should be a good indication of what you missed. The two overclocked GTX 1070’s stomped everything I have tested previously, especially in the 1080p and 1440p testing. So I was especially curious where it would fall in our power testing. The 1070’s only have a TDP of 150 watts, similar to the recently introduced RX 480. Paired up they did top our refreshed chart with a peak of 346 watts but if you look, the two cards actually come in very close to the GTX 980 Ti and not far from the older GTX 780 as well. I was a little concerned that the issues I had with Valley Benchmark in performance testing also caused problems here as well, but even though the results weren’t very good both cards were under load when I checked. Another good indication is that this result is about 100 watts more than a single GTX 1070. All in all the 1070’s aren’t going to need a monster power supply, but you are going to put down crazy numbers.

So is going SLI on a pair of GTX 1070’s a good decision? Well, there is no doubt that pairing two GTX 1070’s up is going to perform really well, well above the performance of a single GTX 1080, especially in 3DMark. Currently, the cheapest you can pick up a GTX 1070 for on Newegg is $430, so you would be looking at $860 plus taxes and shipping to double up. Most of our in-game performance numbers with the GTX 1070’s in SLI though aren’t really reaching that level of performance. A single GTX 1080 is going to get you very close in game and leave you open for the SLI upgrade in the future when card prices go down.

That said I do think that GTX 1070’s in SLI is a good option for people who are currently running 1440p but plan on going to an ultrawide, 4k, or multi-monitor configuration down the line. In that situation, you can save money now but you won’t have to sell off your card in the future. Plus, I’m sure the GTX 1070 will be cheaper at that point as well.

You might call him obsessed or just a hardcore geek. Wes's obsession with gaming hardware and gadgets isn't anything new, he could be found taking things apart even as a child. When not poking around in PC's he can be found playing League of Legends, Awesomenauts, or Civilization 5 or watching a wide variety of TV shows and Movies. A car guy at heart, the same things that draw him into tweaking cars apply when building good looking fast computers. If you are interested in writing for Wes here at LanOC you can reach out to him directly using our contact form.
Discuss this article
Log in to comment
Posts in discussion: GTX 1070 SLI Testing