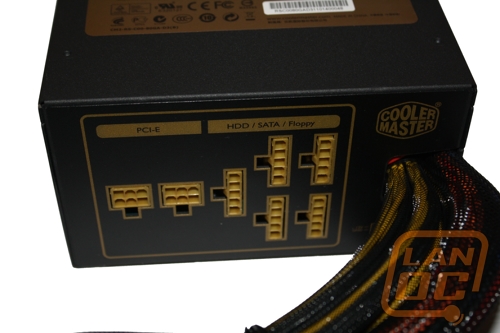 At Computex two weeks ago it seemed like everyone was announcing their new 80+Gold high wattage power supplies, apparently gold is the new black. We already took a look at Sparkles offering recently, today we have a chance to put Cooler Masters Silent PRO Gold 1200 watt to the test. With 1200 watts and an 80+ Gold rating we know this will be a monster, but will it maintain the silent performance that we have come to expect from their Silent Pro line up? 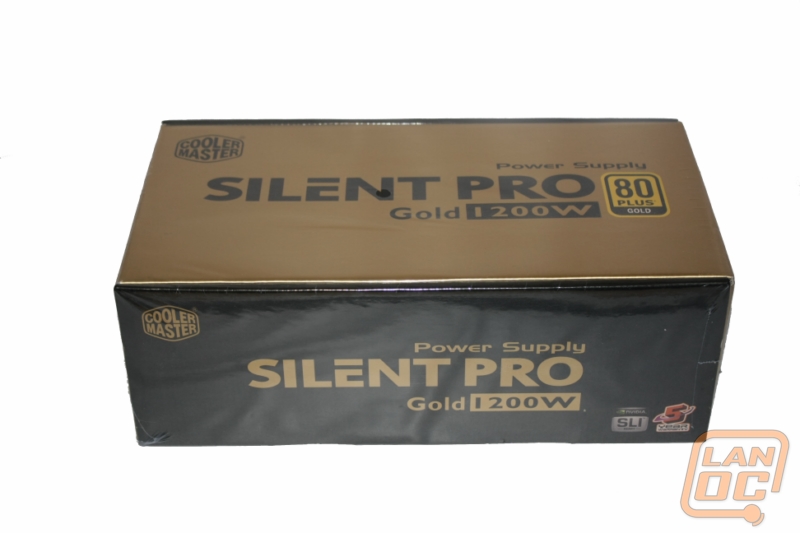 The Silent PRO Gold came in a wide box with a gold and black finish. The front was lacking any photos and information other than the product name, wattage, and a large 80+ gold logo. Around back there is a full specification listing, graphs of both the efficiency curve and noise curve, and pictures of a few of the power supply’s patented components with descriptions of what they do. Oddly enough, still no photos of the power supply, they obviously know that gold rating they have is something special, no need for photos to get your attention. With a box that looks suspiciously like the golden ticket from Willy Wonka I was expecting to find a magical place inside filled with Umpa Lumpa’s, or at least some chocolate. Instead you will find the PSU packed away with an inch of foam on all sides. The manual and warranty card are both slipped inside of a nice folder with the Silent PRO Gold logo on it. Along with the power supply they packed all of the extra cables, power cord, and screws into a nylon bag. The bag has Velcro to keep everything secure; I also love the Silent PRO Gold logo being included on the bag. Not only is it a nice touch, but it will help you keep track of bags if you have more than one modular power supply in the future. 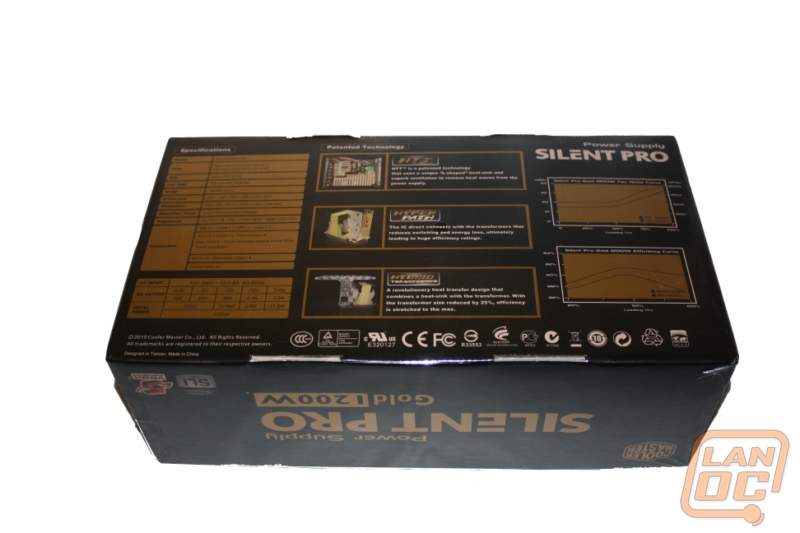 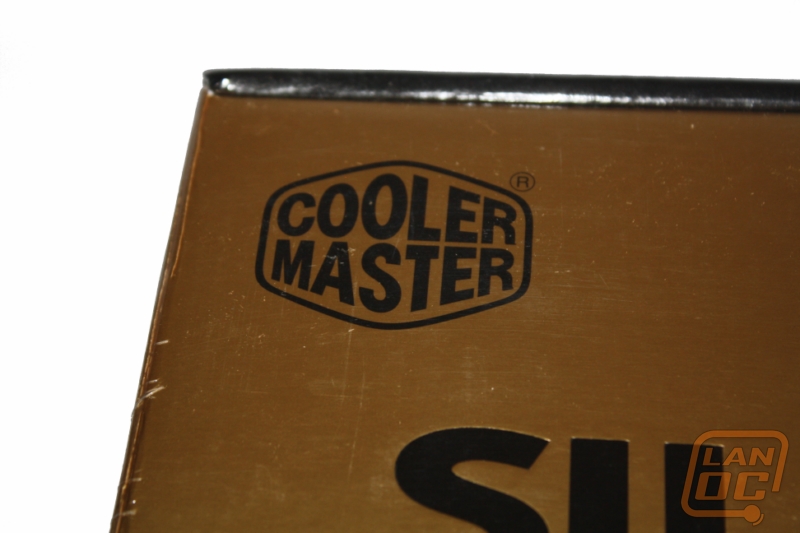 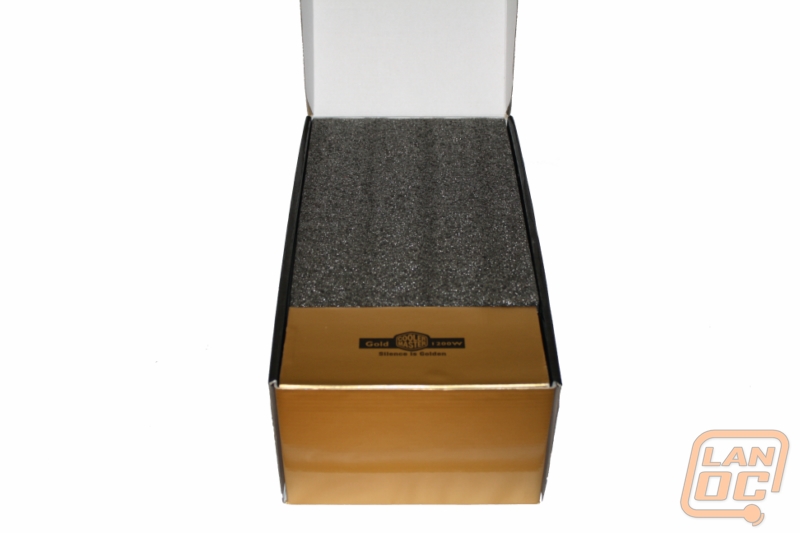 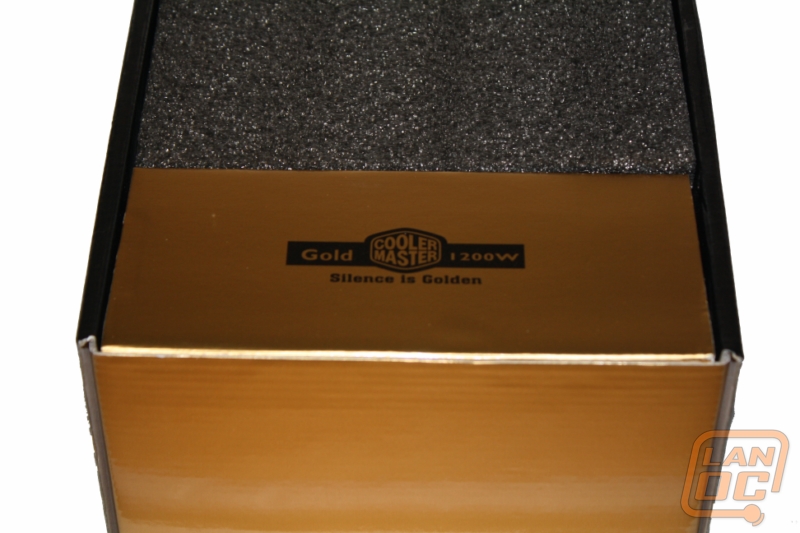 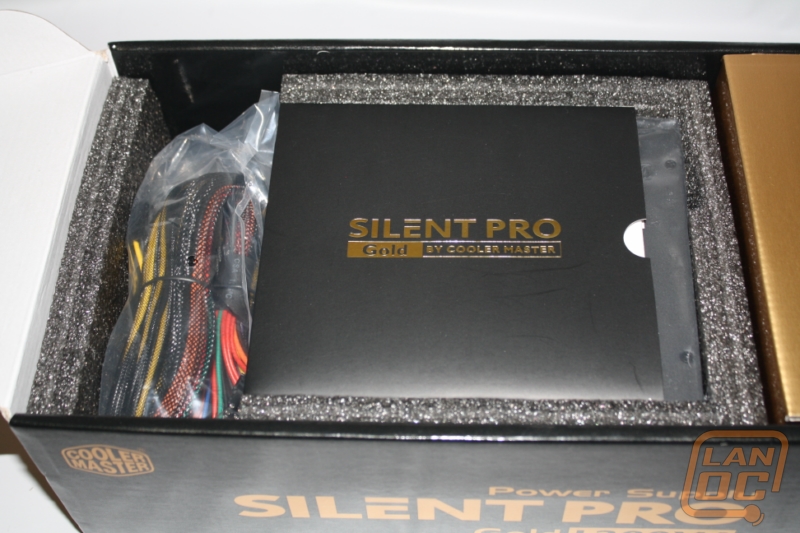 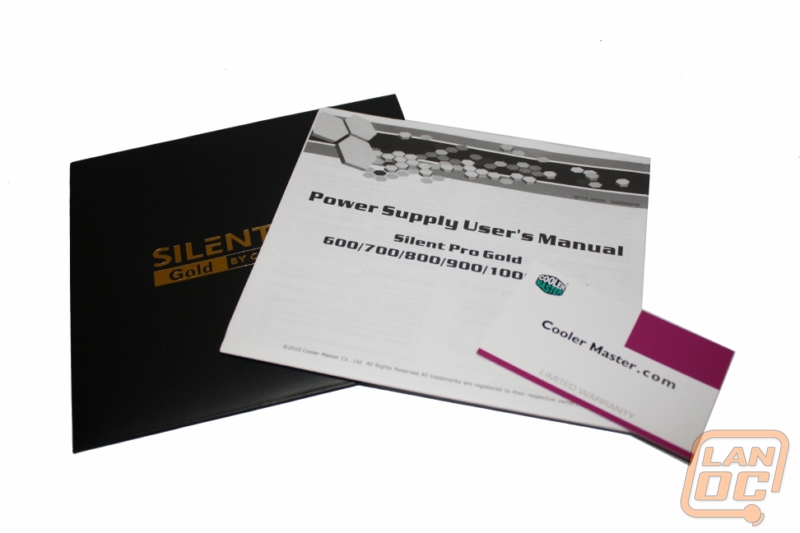 Installing the Silent PRO Gold went just as smoothly as the installation of its less efficient little brother. I was disappointed to see that two PCI express and two 8/4 pin motherboard cables (not counting the normal 24 pin) are attached and not modular. What that means is if you don’t need both 8/4 motherboard cables you will have to hide them, kind of defeats the purpose of a modular design doesn’t it? I was impressed with each of the PCI cables having an 8/6 pin plug along with a 2nd 6 pin. Video cards requiring two 6 pin connections or an 8 and a 6 will only need one cable. All of the modular cables come in the same flexible thin design that I am always praising. The two PCI modular PCI cables also have 8/6 pin connections along with a 2nd 6 pin, together you can hook up four high end video cards! With the thin cabling, routing everything cleanly was easy, the only trouble I had was with keeping the thicker cabling routed nicely. 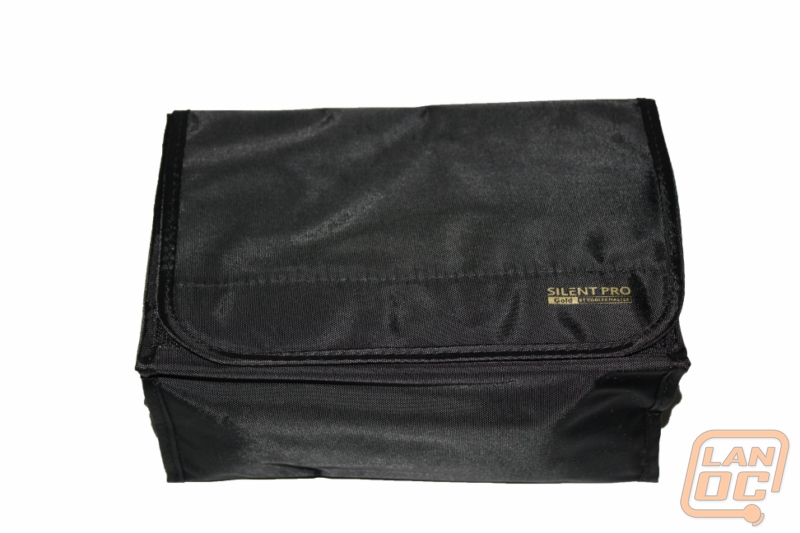 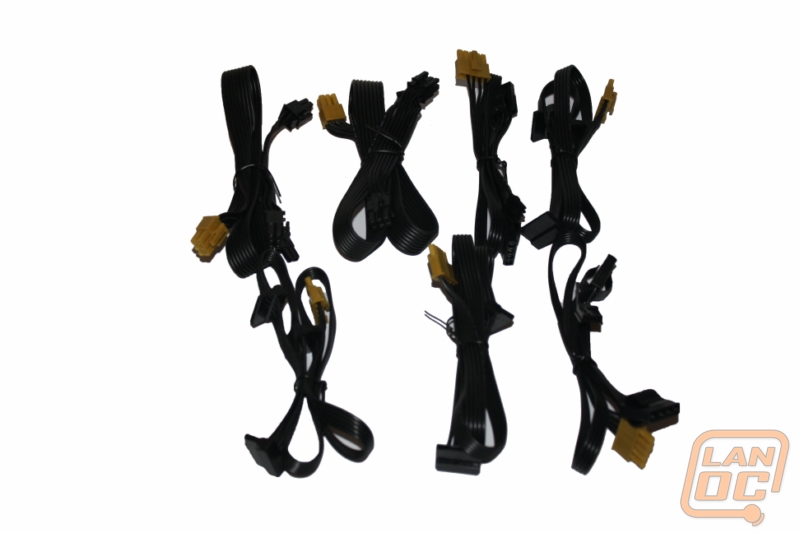 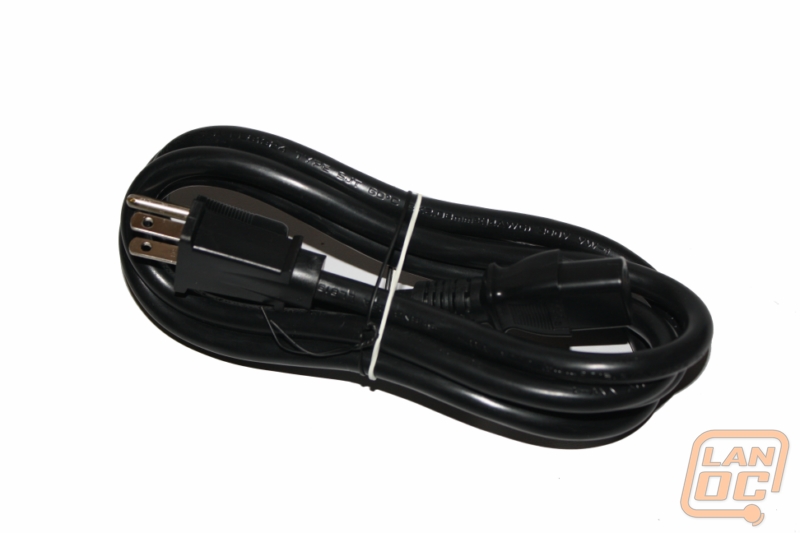 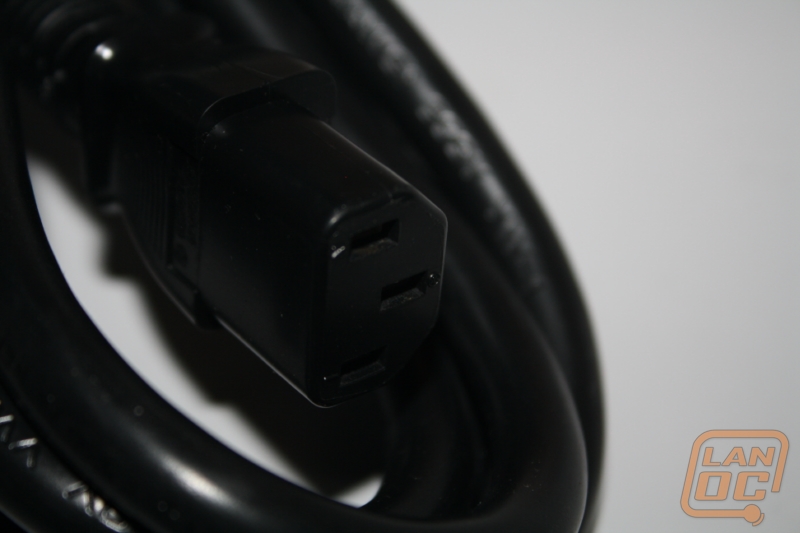 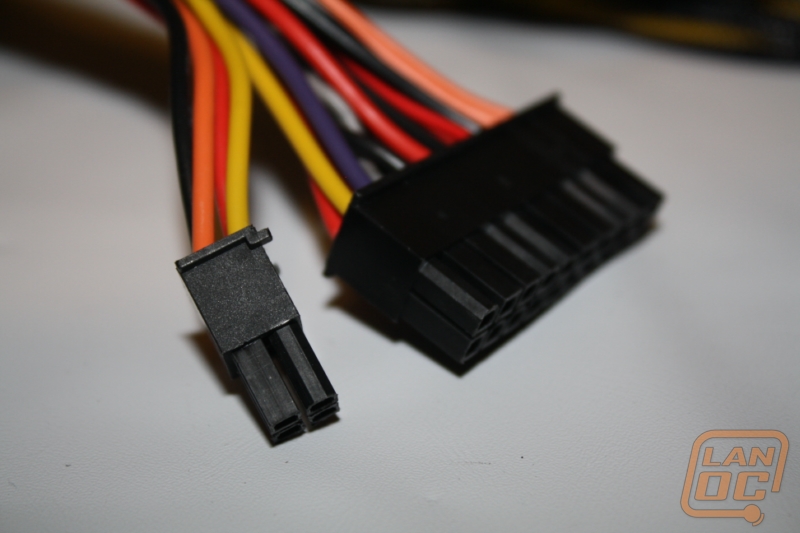 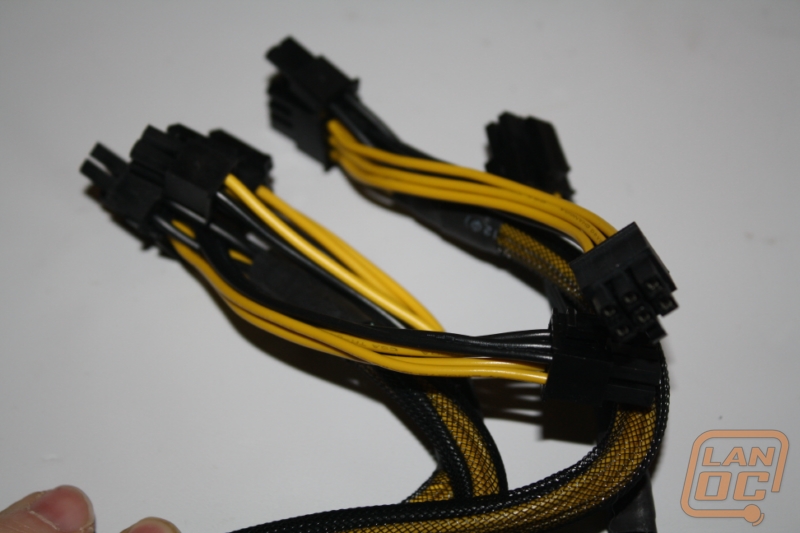 As I have said before, it’s nearly impossible to put these 1200 watt power supplies under a load. Tossing our PSU test bench’s two power hungry 4870’s today will put the Silent PRO Gold under a mid range load. We will take a look to see how much the voltage drops when putting both cards to the test using 3DMark Vantage. Here are our results. 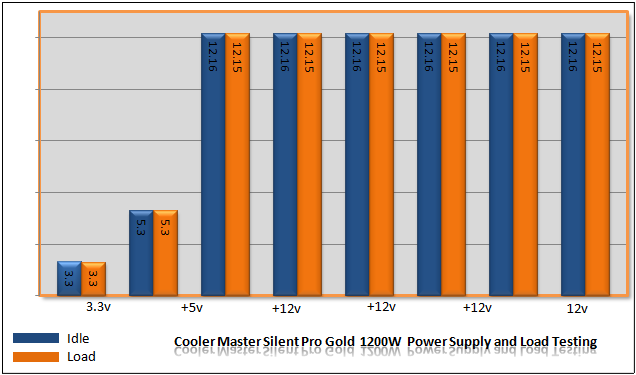 As you can see this beast hardly even noticed the load of the 4870’s and our test rig. I didn’t see any fluctuation in voltage before, during, and after our testing. The numbers speak for themselves, but the most impressive part is the 80+ gold rating. That means this power supply at a load of near 800 watts will be running at just over 90% efficiency. This is perfect for those of you who are watching how much power you use but also still want a high end gaming PC. 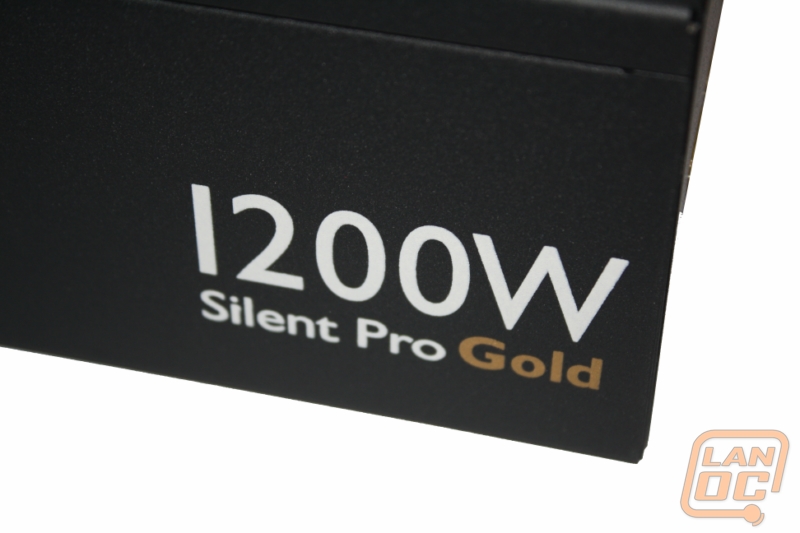 So did it live up to the reputation that its smaller brother has developed when it comes to noise levels? Frankly, I was never able to put the Silent Pro under enough of a load to get the fan really going. That made all of our testing near silent. Even when the fan did start to spool up you won’t notice it. The lack of noise was impressive. 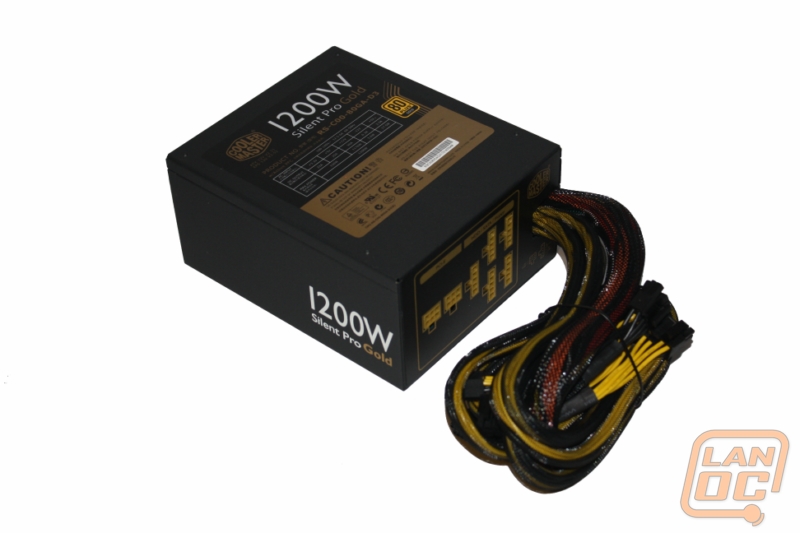 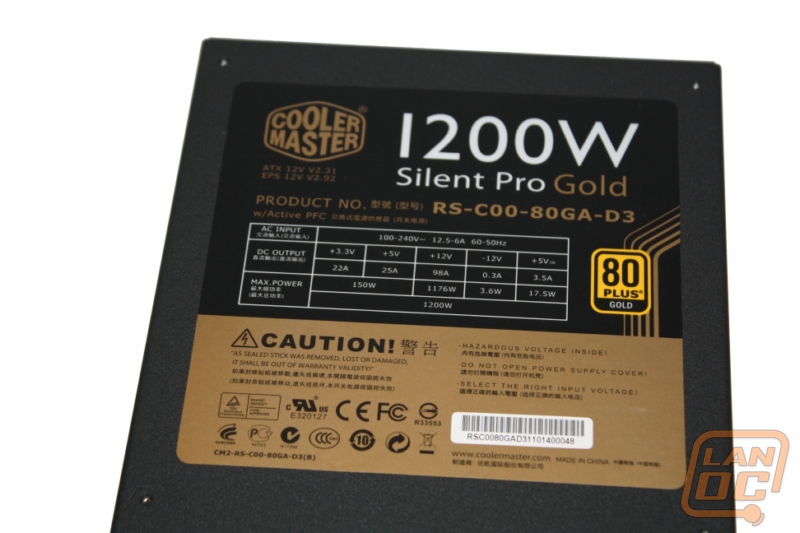 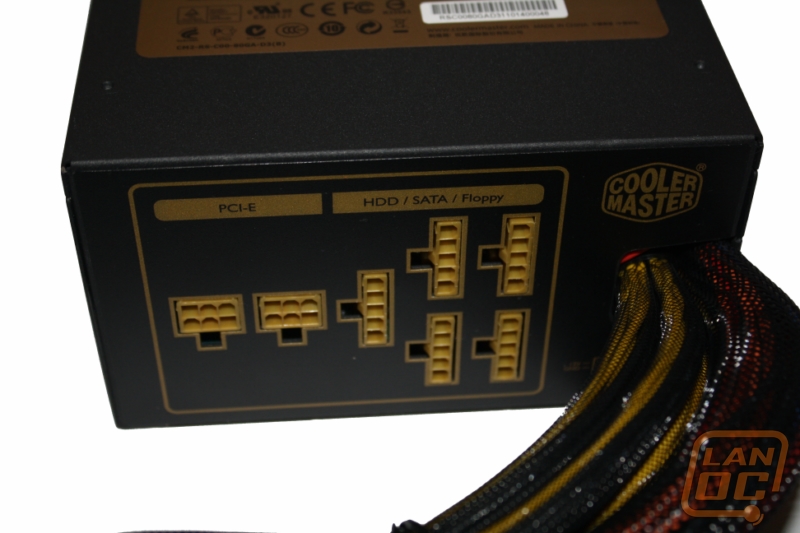 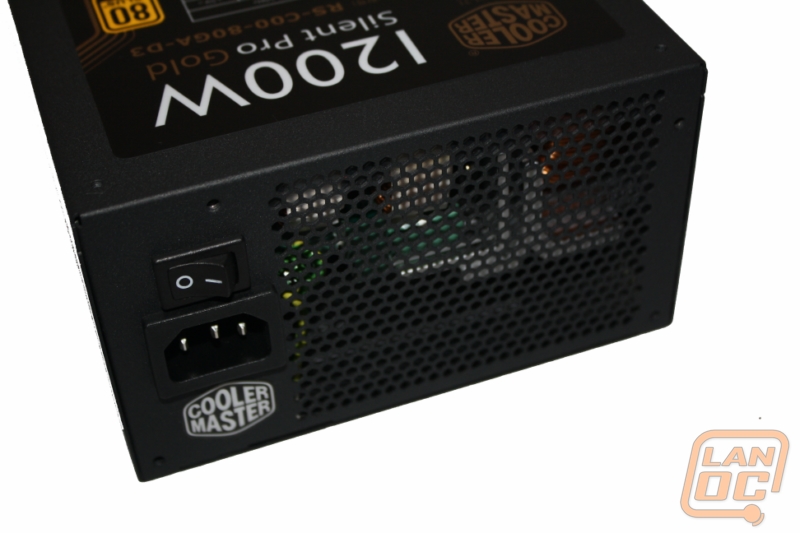 Cooler Master hit one out of the park with this monster. Without two or three 480’s you won’t be able to make the Silent PRO Gold work up a sweat. Sporting the wonderful 80+ gold logo is also impressive at this wattage. During my testing, the PSU performed with a noise level that at its loudest point was only noticeable if you tried to find it. When compared to most other power supplies this is especially impressive. If you are looking for a power supply that does it all you have found the right one for you. I highly recommend Cooler Masters Silent PRO gold. 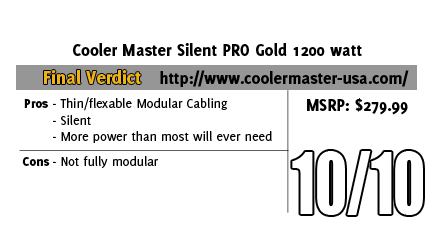 You might call him obsessed or just a hardcore geek. Wes's obsession with gaming hardware and gadgets isn't anything new, he could be found taking things apart even as a child. When not poking around in PC's he can be found playing League of Legends, Awesomenauts, or Civilization 5 or watching a wide variety of TV shows and Movies. A car guy at heart, the same things that draw him into tweaking cars apply when building good looking fast computers. If you are interested in writing for Wes here at LanOC you can reach out to him directly using our contact form.
Discuss this article
Log in to comment
Posts in discussion: Cooler Master Silent PRO Gold1200w