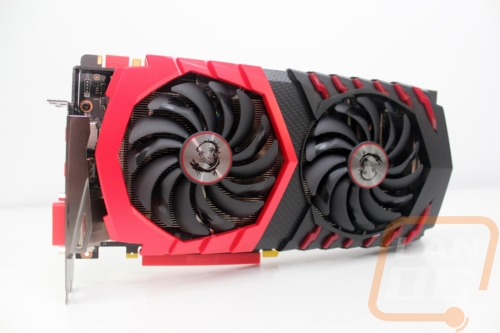 So we have put the MSI GTX 1070 Gaming X through all of our testing, taken a closer look at its design, checked out the software, and even spent a little time talking about the whole review firmware drama. In the end, I have found the GTX 1070 Gaming X to be a great performing card in every single test I put it through. In the synthetic benchmarks and in-game it performed better than the Titan X with just the GTX 1080 performing better in a single card configuration. It ran really cool in my tests and didn’t really break the bank for power consumption as well. The same goes for its noise, the card turns off the fans at low loads, was quiet compared to the FE and Reference coolers at 100% fan speed and wasn’t too bad at 50% fan speed.

The new cooler design looks good as well and I love that they moved to an RGB logo up on the edge of the card. The Gaming App they include isn’t too bad as well, adding a few nice in-game overlays if you would like and letting you get a small overclock with a single click. But there were a few downsides as well. For one, they added that nice RGB light for the logo, but then the rest of the lighting is only red. I think if you are going to go RGB you should go all the way. People might want to match the lighting to the rest of their PC and the if it’s not red you are going to have to turn off the other lights.  That’s a relatively small design issue, though. My big complaint was with the overall size of the Gaming X. Cards have been getting larger and larger but at an inch and a half over the top of the PCI slot the GTX 1070 Gaming X is a little bigger than I would like. This is compounded with the power connections sitting at the top of the PCB facing up. So be careful to check to make sure you won’t have any fitment issues.

So is the MSI GTX 1070 Gaming X the card to get? Well currently it is selling for $459, this is a little higher than the original $379 MSRP that was announced for the GTX 1070 but it is in line with what other GTX 1070’s are selling for. In fact, it is selling for the same amount as the Founders Edition cards when you can even find them in stock. I think compared to a Founders Edition card that the MSI is going to get you a little extra performance for free and its cooling is clearly much better as well. Really the only reason not to jump on one would be if it’s not going to fit in your build. The large size is a problem, but not a deal killer in most “cases”. I think the GTX 1070 overall is a much better card to aim for over the GTX 1080 unless you are planning on running a surround monitor setup or 4K. With 1080p and 1440p still being the more popular choices, the GTX 1070 Gaming X should hit the sweet spot for high-end gaming at those resolutions. 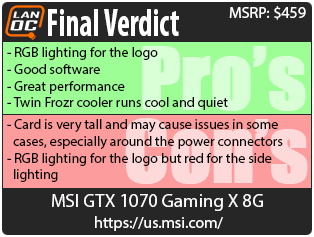 You might call him obsessed or just a hardcore geek. Wes's obsession with gaming hardware and gadgets isn't anything new, he could be found taking things apart even as a child. When not poking around in PC's he can be found playing League of Legends, Awesomenauts, or Civilization 5 or watching a wide variety of TV shows and Movies. A car guy at heart, the same things that draw him into tweaking cars apply when building good looking fast computers. If you are interested in writing for Wes here at LanOC you can reach out to him directly using our contact form.
Discuss this article
Log in to comment
Posts in discussion: MSI GTX 1070 Gaming X 8G

We have 1054 guests and one member online