Looking at an overclocked card is always interesting. I mean after seeing the performance of the reference card we already have our expectations set. Because of this sometimes checking out a card like the GTX 760 Superclocked w/ACX can be underwhelming, but I can say without a doubt that this isn’t one of those times. The reference GTX 760 left a little to be desired both in its cooling as well as styling. EVGA did a great job improving on both of those things. I think the ACX cooling of the EVGA GTX 760 Superclocked w/ACX is going to look great in any build without drawing to much attention as well. Even better yet was the boost in performance that I saw over the stock speeds with the GTX 760 Superclocked w/ACX’s overclock. The overclocked numbers inched close and sometimes beyond the performance of the GTX 670, at a considerably lower cost. Speaking of cost, this card is going to run you $259.99 at launch, $10 more than the reference card. For $10 you are getting much better cooling, styling, and a big boost in performance.

My only complaint about the card at all was that my overclocking results didn’t live up to the expectations that I saw with the reference card, but this is unrelated to the GTX 760 Superclocked w/ACX. The GTX 760 is just going to be hit and miss for overclocking. Anyhow, if you are on the market for a GTX 760, I would highly recommend picking up this card, considering the price over a stock card you really can’t ask for anything more. 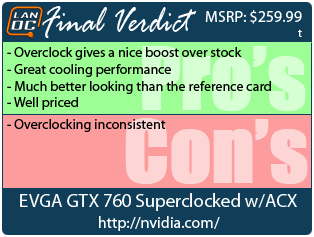 You might call him obsessed or just a hardcore geek. Wes's obsession with gaming hardware and gadgets isn't anything new, he could be found taking things apart even as a child. When not poking around in PC's he can be found playing League of Legends, Awesomenauts, or Civilization 5 or watching a wide variety of TV shows and Movies. A car guy at heart, the same things that draw him into tweaking cars apply when building good looking fast computers. If you are interested in writing for Wes here at LanOC you can reach out to him directly using our contact form.
Discuss this article
Log in to comment
Posts in discussion: EVGA GTX 760 Superclocked w/ACX