Just this past week I was away on vacation, I came back to a stack of boxes with most of them being video cards. This time, most of them are a new model from Nvidia. Just like with other big launches, the Nvidia GTX 780 was quickly followed up by the GTX 770. To continue filling in gaps in their product line that the GTX 780 launch created Nvidia is launching the GTX 760 that will replace the GTX 660 Ti. Today we are going to take a look at the new GTX 760 and see what it is all about as well as seeing what it is capable in our test suite. The GTX 780 and GTX 770’s were both impressive, I am very curious to see what they will be following them up with.

As Nvidia went over the details of the GTX 760 I was sitting comfortably with a nice view of the ocean while on vacation. They went over some of the details that we spoke about on our forums a few weeks ago with PC gaming being a big focus for a lot of the developers at GDC this year. They also showed us where the GTX 760 will fit in their product lineup. As you can see below the GTX 760 is replacing the GTX 660 Ti and we will still have the GTX 660 and below. Something they don’t normally show us is their product lineup for the future, as you can see below this will be the last launch until at least the fall. I would guess that Nvidia would like to see AMD bring out its new cards before they continue bringing out the 700 series. All of the GTX 600 series cards have adjusted in price to fit their new placement in the product line as well. 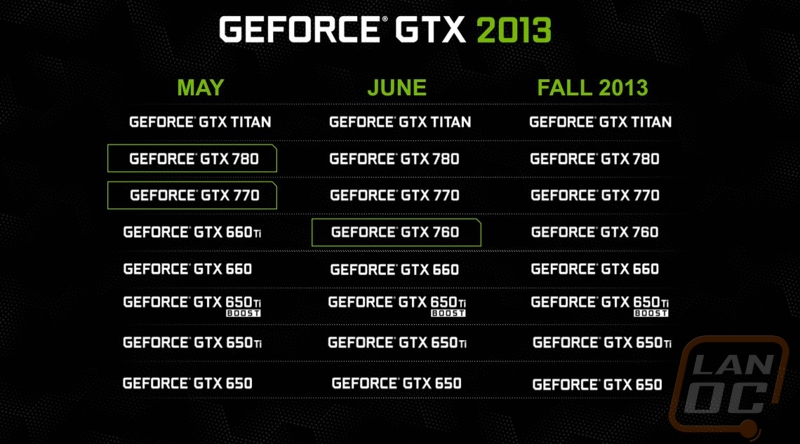 Now that we know where the GTX 760 goes in the product lineup, let’s take a look at its specifications. As you can see below the GTX 760 is very similar to the GTX 660 Ti. I put together a table showing the specifications between the GTX 660, GTX 660 Ti, and the new GTX 760. As you can see the GTX 660 Ti actually had more CUDA cores than the card that replaces it. They did however bump up the clock speeds as well as give the GTX 760 more voltage to support those clock speeds as well. On the memory side of things they have moved from a 192 bit interface to a 256 bit interface for a little more bandwidth. It will be interesting to see in our performance sections how the improved clock speed and memory bandwidth will perform against the lower CUDA cores. 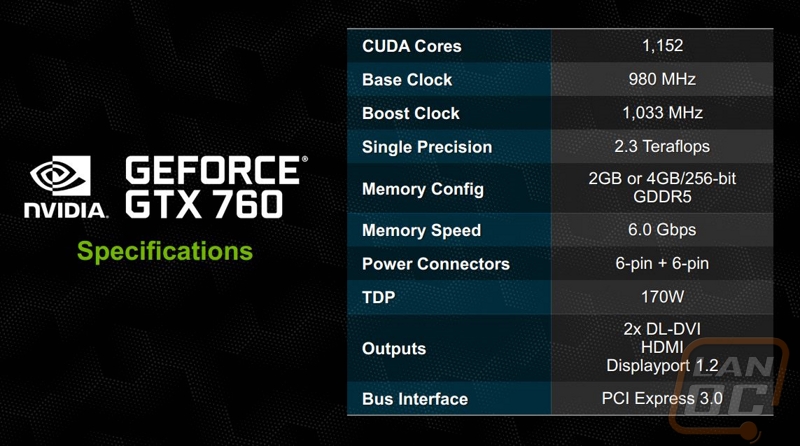 Just like the GTX 770 and GTX 780 the GTX 760 does still have Boost 2.0 and along with that the new adaptive temperature controller that eliminates a lot of the quick fan speed adjustments that end up making a lot of noise. Nvidia has figured out that it is the big changes in fan speed that make fan noise so noticeable, slower more controlled fan speed changes will still keep things cool while being less noticeable to the end user. 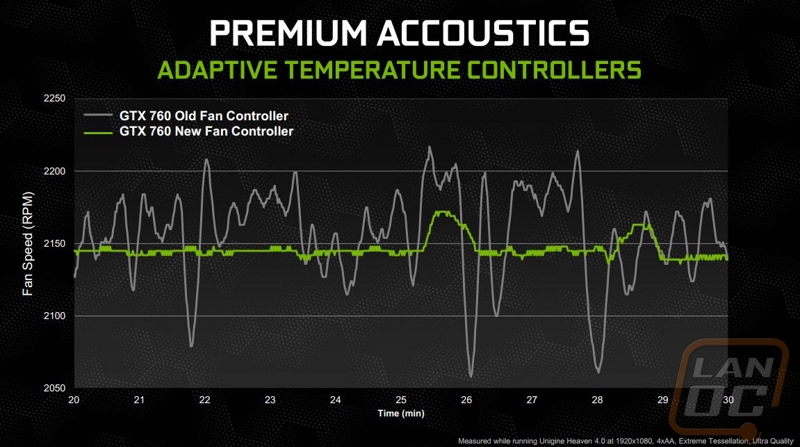 We have 1167 guests and no members online