The GTX 770 ACX that I took a look at recently was my first experience with EVGA’s new ACX designs. After getting it on the test bench I was extremely impressed, my only complaint at the time was that I was also very fond of the GTX 770’s all metal fan shroud as well. Well here on the GTX 760 that isn’t a worry at all. Going from the reference GTX 760 to this card its night and day aesthetically. As a car guy the design reminds me of an all blacked out car with large rims. Everything on the card is black other than the metal trimming along the top edge and on the side where they keep all of the branding. This gives it a very clean and discrete look that a lot of people are into. 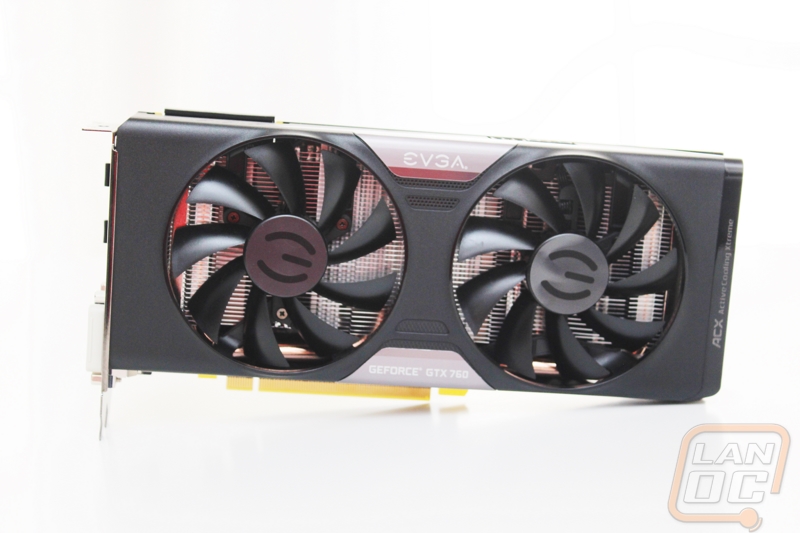 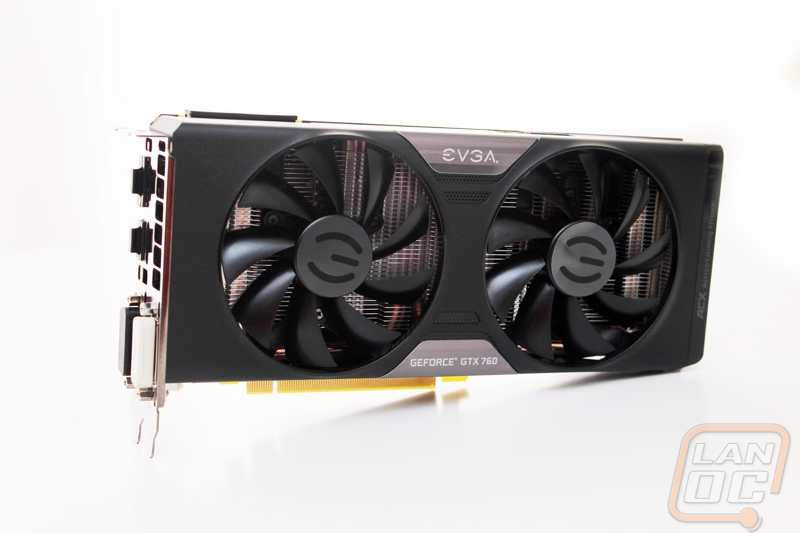 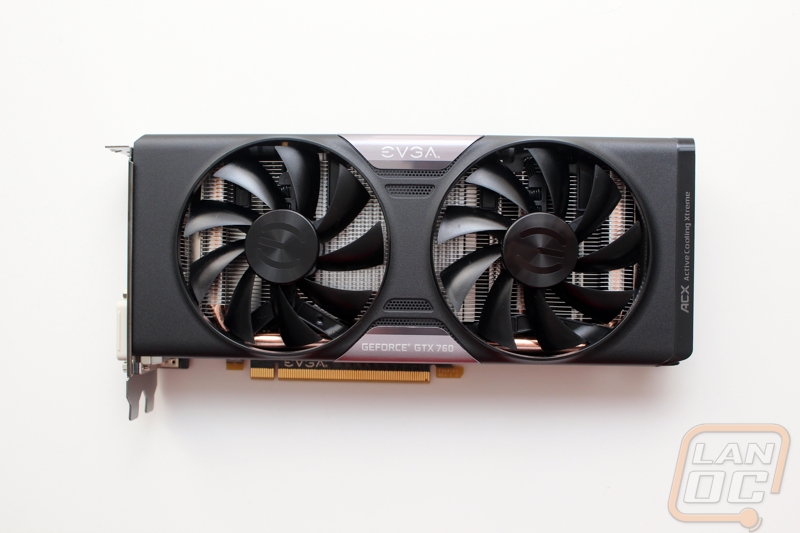 Here is a nice breakdown of what ACX is all about. As you can see, EVGA designed the ACX cooling with a small wall of heatsink fins in between the two fans to keep turbulence down. This should help keep noise down as well as make for more efficient cooling. Another key feature is the double ball bearing design in each of the fans. This is important again for keeping the noise as low as possible while extending the life of the fans as well.

EVGA also did a good job of making sure you can look and see what card you have as well. A lot of companies don’t include any markings on the top edge or when they do it’s something general like their brand. It’s nice to be able to show off the specific card. In this case everything can be found on the top edge as well as on the middle of the side of the card. Both locations are easy to see when looking but don’t stand out to much that it might take away from the look of the card in your pc. 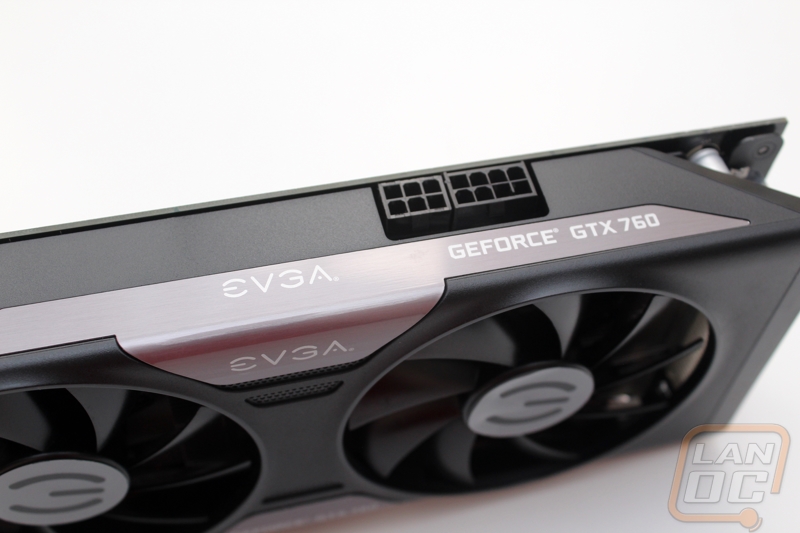 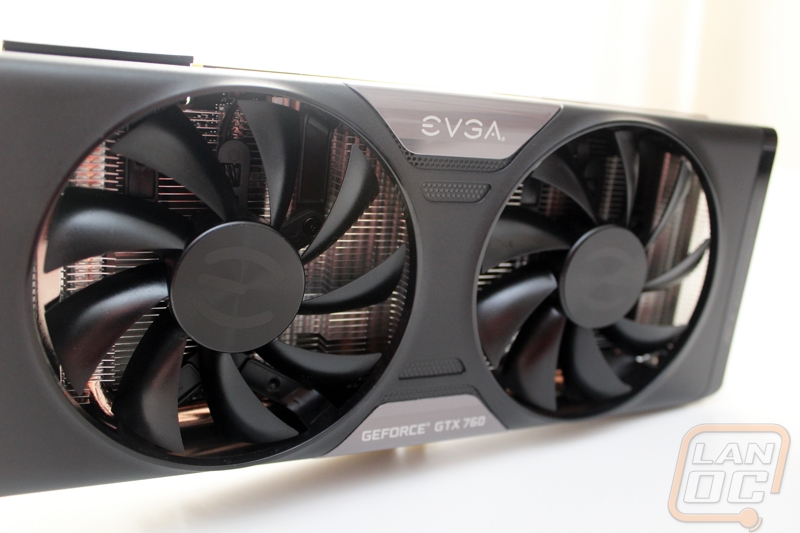 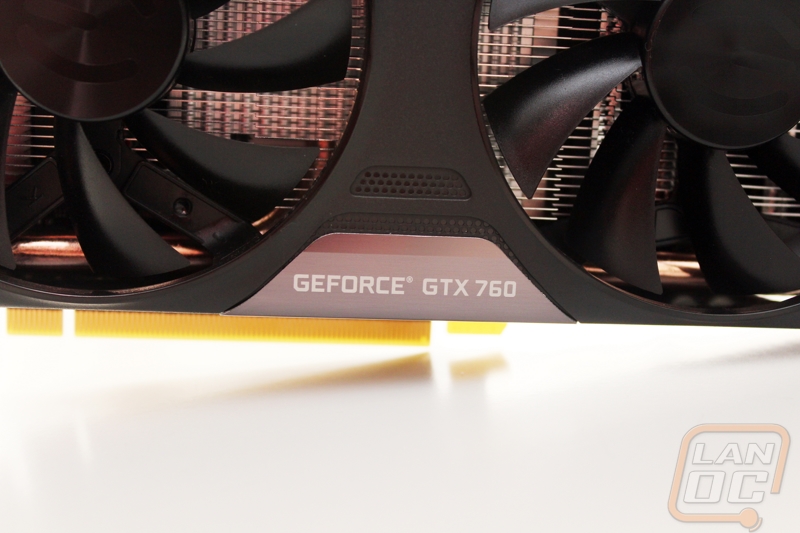 Just like the GTX 770 ACX, the EVGA GTX 760 Superclocked w/ACX is an open air design. Its most obvious on the end where it is completely open but there are also openings along the bottom of the card as well. This mean that hot air being blown off the card will be pushed into your case not all out the back like the reference design. This leaves more room for better cooling, but if your case hardly has any cooling this will add to the heat on your motherboard, cpu, and hard drives. 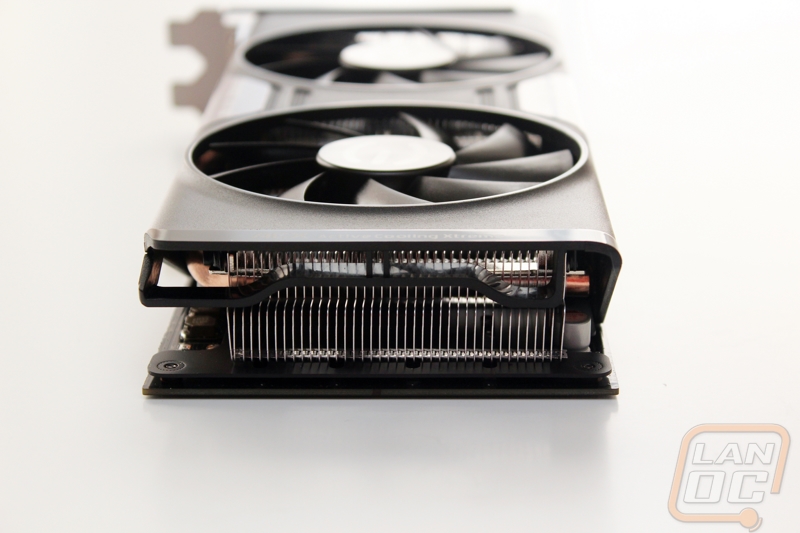 On the flip side, things are equally as interesting. If you remember, the reference card uses a short PCB design while this card has a full length PCB. If you look closely you can see that the power connections are basically in the same spot, they just used the additional PCB space to spread things out a little and most importantly they did this to include support mounting holes for the ACX cooling. 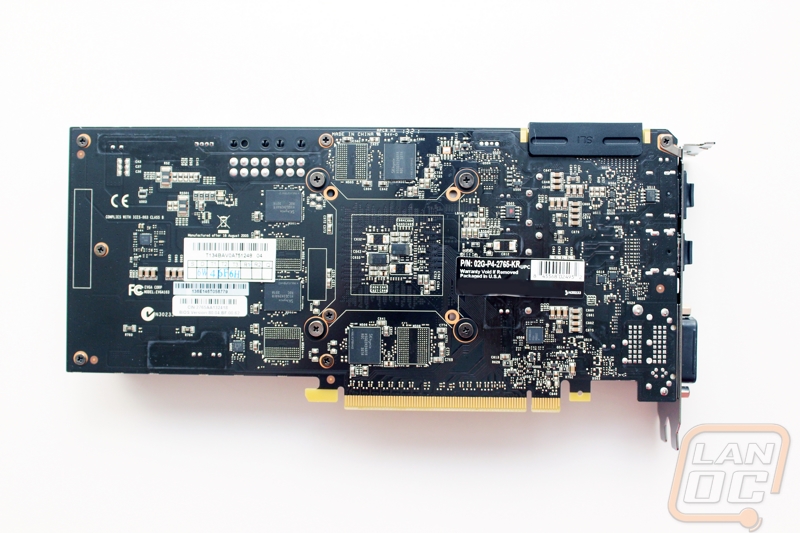 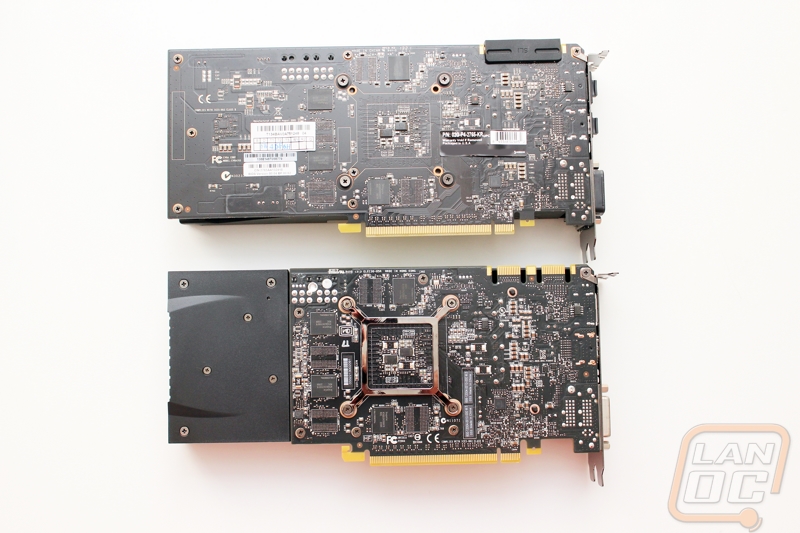 Just like the reference card the EVGA GTX 760 Superclocked w/ACX does have two SLI bridge connections; this means the cards support triple SLI if you need to expand in the future. 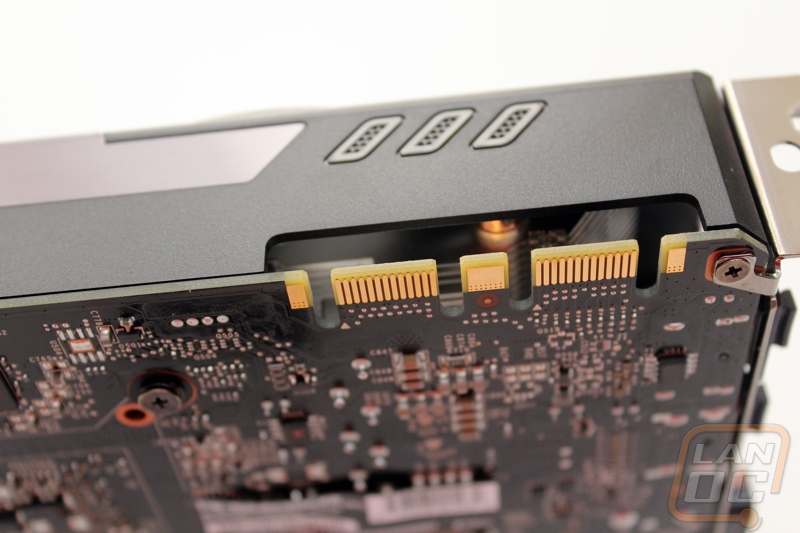 The rear slot of the EVGA GTX 760 Superclocked w/ACX does have the high flow bracket that flows a lot more air than the stock slot cover. They were able to do that by opening up every vent even larger with small sections of metal between them. They also added slots above the DVI slots and around the DisplayPort and HDMI connections. Speaking of, for connections you still get the same dual DVI, HDMI, and Displayport connections that we have seen for the past few years. Only one of the DVI ports will support a DVI to VGA adapter as well. 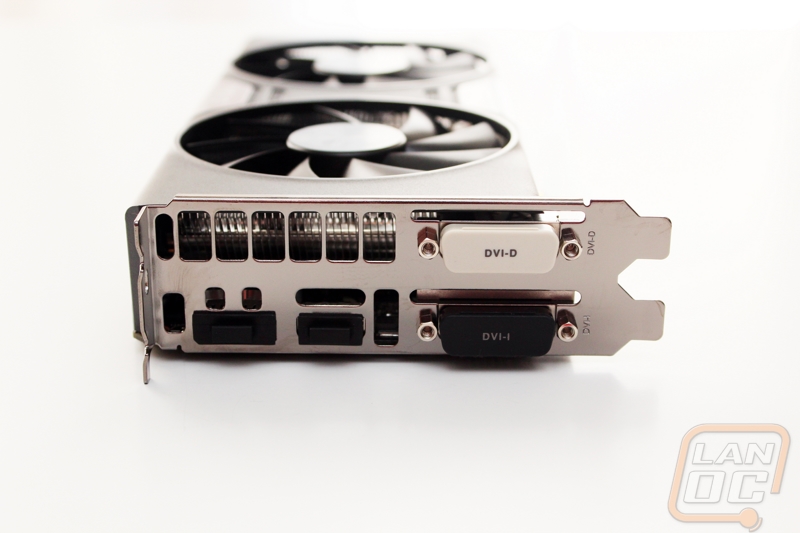 For power connections the reference card required two six pin cables while this card needs a six pin and an eight pin, I would guess that the 170 TDP of the reference card was pushing things a little and EVGA wanted to make sure there was enough power for the overclocked card. 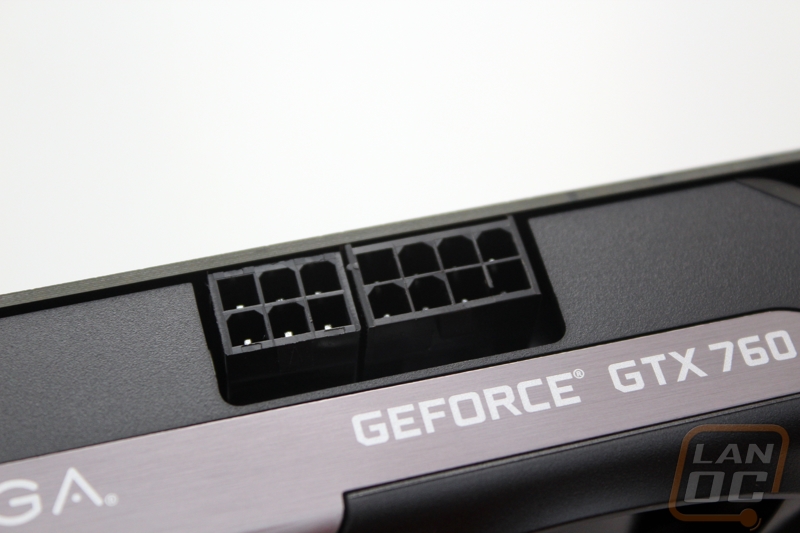 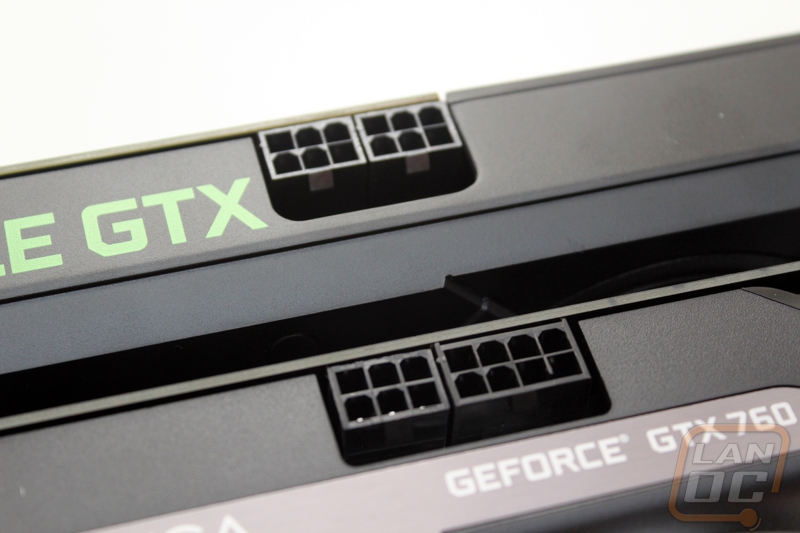 When you put the reference card next to the EVGA GTX 760 SC ACX we can really see how much better it looks. This is a great looking card and the two large fans help both with its performance and its styling. Size wise the EVGA card takes up the same amount of space although as we saw before the PCB is considerably longer than the reference design. 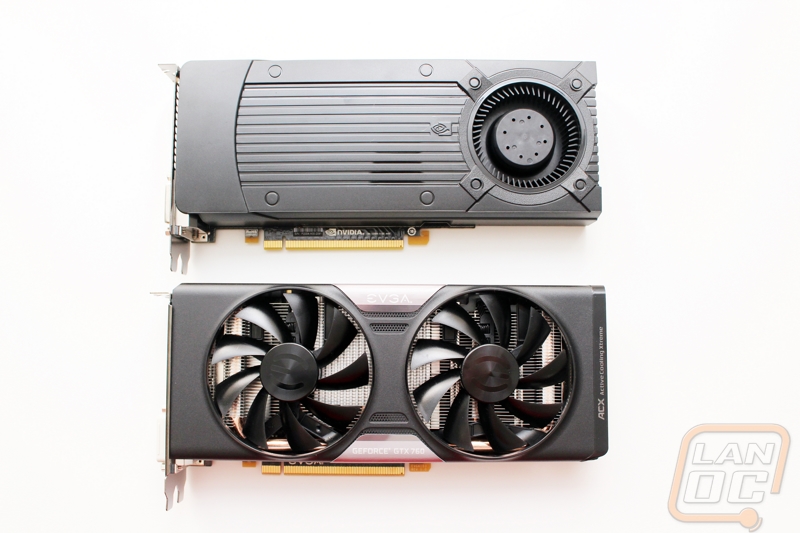