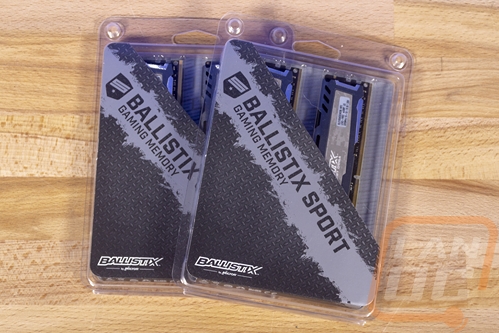 This isn’t the first 3200MHz design that Crucial has brought out in their Ballistix lineup. But I am happy to see them finally bringing 3200MHz into their cheaper Sport LT lineup. I think most people are looking in the 3200MHz range for mid-range to budget builds, especially with Ryzen being so dependent on memory clock speeds for performance. The two kits that they sent over performed as you would expect for a 3200MHz kit with a CAS Latency of 16. I was also happy to see that there is some room left for overclocking, even at our modest test setting of 1.35 volts.

My only complaint with the kits was more with the overall design of the Sport LT lineup in that their cooler design is starting to feel a little dated. Specifically wrapping the heatspreader around on to the top would be nice, most builds that is the only part you can even see. I also don’t particularly like the digital camo. But I do like that they have grey and also white kits. The red I don’t care as much about, but bringing in a nice black heatspreader version would be a nice addition that stays color neutral to match most of today's hardware.

While I think the aesthetics are starting to get a little dated. They do still have a cleaner look than any of the other kits on the low end of pricing when it comes to both the 2x16GB and 2x8GB kits that I tested. Kits like the Ripjaws are a little too aggressive with their heatspreader designs.

As for pricing, well the 2x8GB kit is listed for $124.99 which is a good price. There are a few kits that are cheaper, but most are in the $119/$125 range. Funny enough when I’m shopping for a budget build, once I decide on the speed and capacity that I want. I normally go for the cheapest good looking kit that is from one of the few companies I trust. This would be that kit, all of the kits that are cheaper aren’t all that good looking in my opinion. 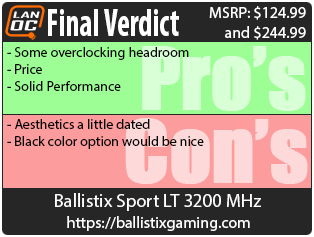 You might call him obsessed or just a hardcore geek. Wes's obsession with gaming hardware and gadgets isn't anything new, he could be found taking things apart even as a child. When not poking around in PC's he can be found playing League of Legends, Awesomenauts, or Civilization 5 or watching a wide variety of TV shows and Movies. A car guy at heart, the same things that draw him into tweaking cars apply when building good looking fast computers. If you are interested in writing for Wes here at LanOC you can reach out to him directly using our contact form.
Discuss this article
Log in to comment
Posts in discussion: Ballistix Sport LT 3200 MHz

We have 1538 guests and one member online