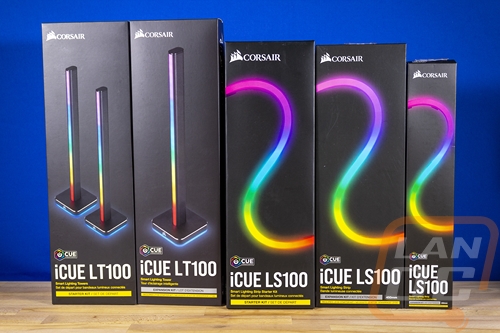 Well, I can’t test the iCUE LT100 and iCUE LS100 without taking a look at the iCUE software right? At this point checking out iCUE is a weekly occurrence around here simply because Corsair has it integrated across the board with their products. The benefit to this is you only need one program if you buy in big to the one brand and Corsair covers such a big range of products from lighting and fans, PSUs, memory, peripherals, cases, and everything in between. So when you open up iCUE it will list off all of the supported products you have hooked up at the time with a picture of the device and you can click on each to make changes.

So when you get started with the LS100 and any addressable LED product you do need to set things up. For iCUE to know your lights you need to tell them which LS100 strips you are using and in what configuration. My use was to light up shelving, so I went with the external LED strip setting and then let it know I have two long and two shorts, I then split our starter kit and expansion kits up. If you use the LS100 as backlighting for your monitor you should switch it to a monitor setup, you can then select the direction you have them hooked up rotation wise. 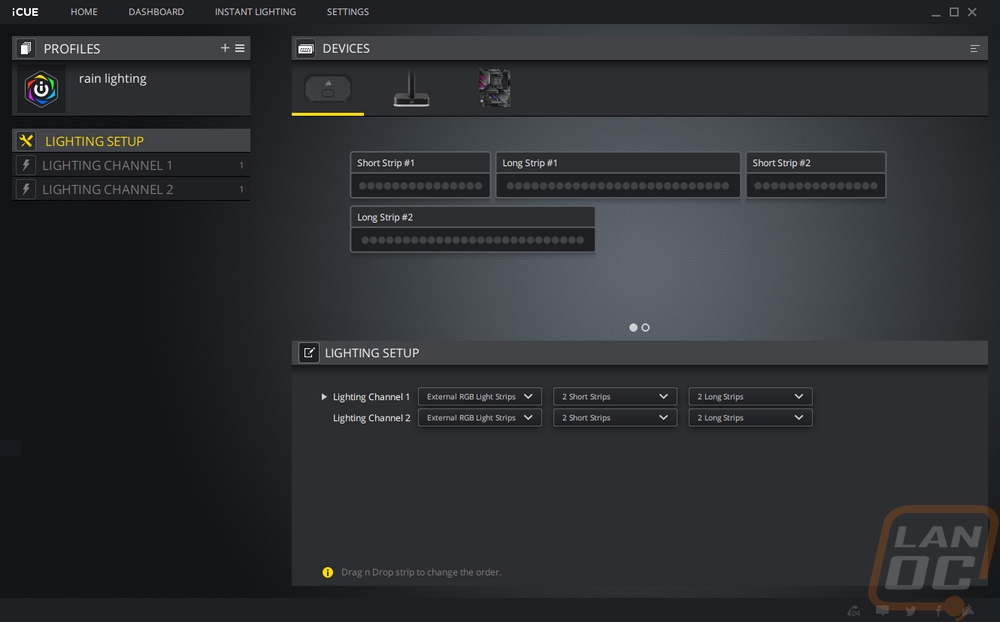 Once set up you can control each of the two lighting channels independently. Which is great, especially if you decide to use one as a lighting accent and the other as a monitor accent for example. All of the individually addressable LEDs are all laid out no matter which mode you are running. You can highlight groups or even individual lights and then set those to any of the available lighting effects. The effects range from simple things like breathing or solid colors to different strobing, visor, and other ambient effects like fireplace lighting and Borealis which gives you norther lights lighting. Everything on the far right list called lighting link is repeated from the other lists, but picking from these link the lighting with other iCUE devices that also have link turned on. So you can color shift and have your PC, desk, and peripherals all match at the same time or do a cool visor effect that runs the light around. Anything you have selected has additional settings. For the basic options that may mean picking a specific color or picking multiple colors to flip between. You can change speeds and direction as well when it applies. 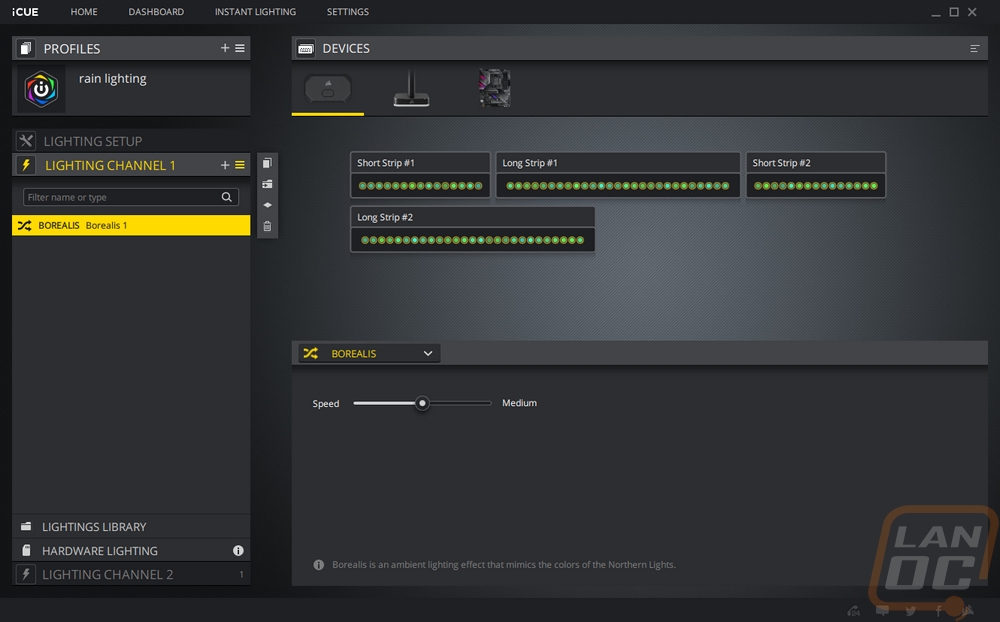 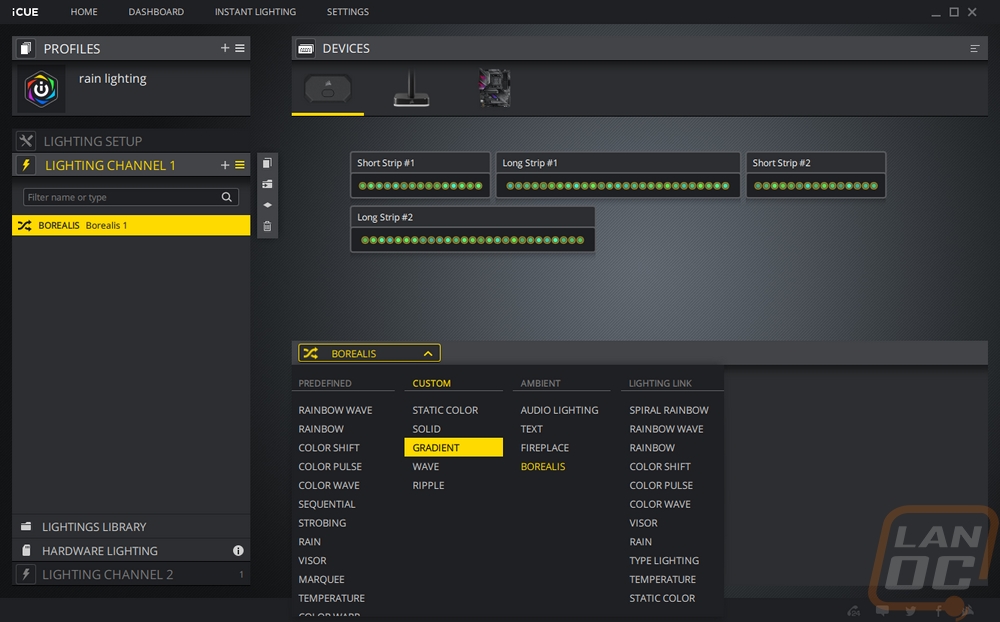 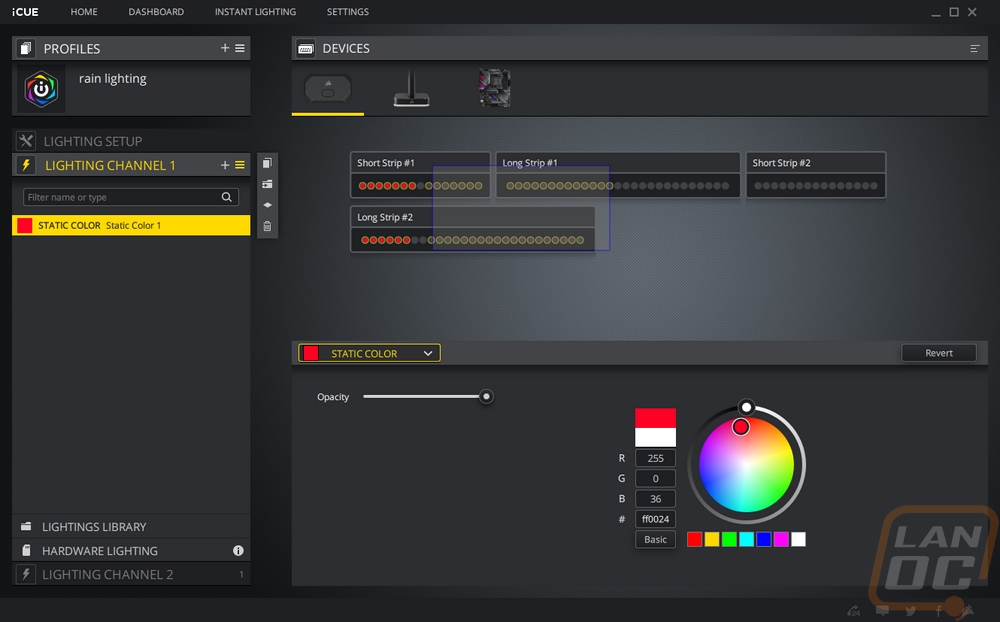 Now if you are running the monitor background lighting configuration there is a new lighting option that pops up which is interesting. You can do video lighting and if you have multiple monitors it lets you select which monitor you have the lighting on. This mode picks up the colors near the edge of the monitor and matches the LED lighting to them. So when you watch a movie it makes things feel larger. 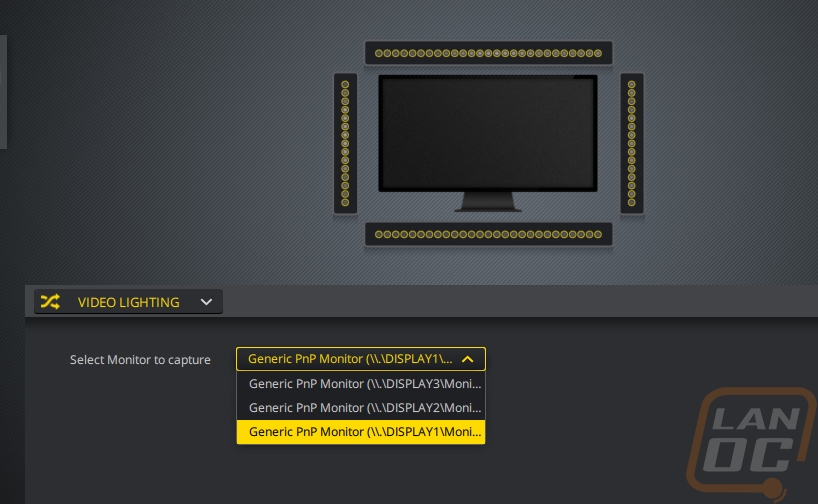 The LT100 starter kit and expansion get us three lighting towers. Out of the box, it will work with just two towers, but adding the third tower into the mix means you do need to run the lighting setup so it knows you have more LEDs and you can put the towers in order. All of the same lighting effects from the LS100 and all of the iCUE supported lighting products are all available for the LT100. The only unique thing is the LT100 has the same video lighting option as the LS100 when set as a monitor backlight which makes sense because Corsair does advertise the LT100 as being used on both sides of your monitor. It is a little different though, allowing you to pick the areas where each tower screen captures as well as which monitor to capture in the first place. 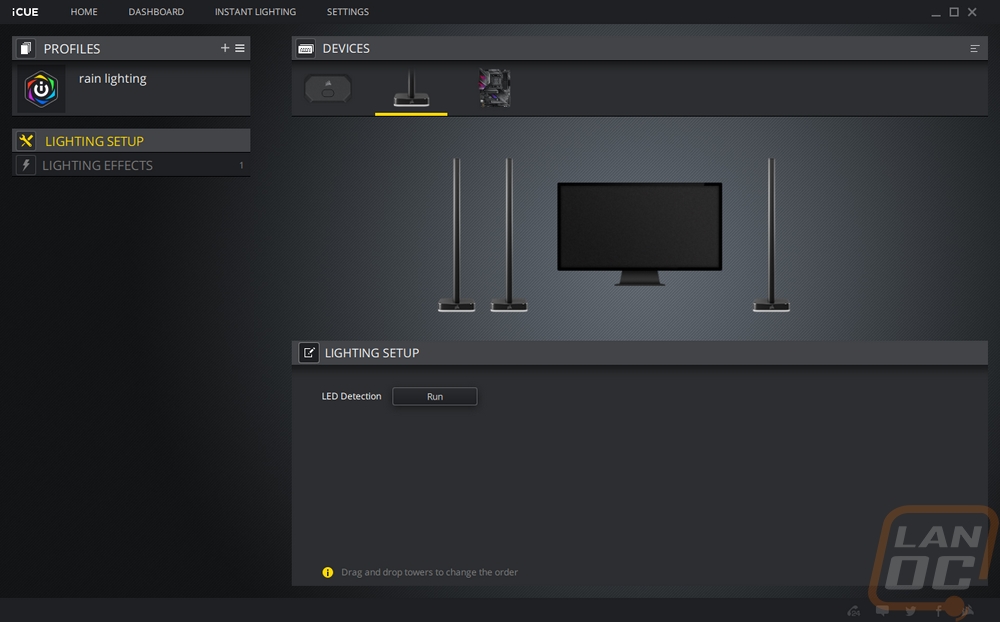 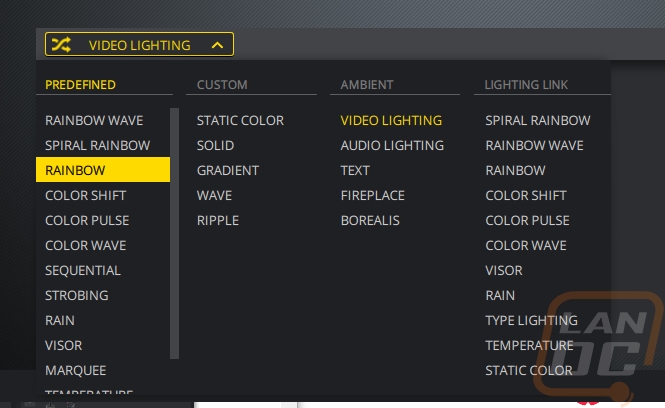 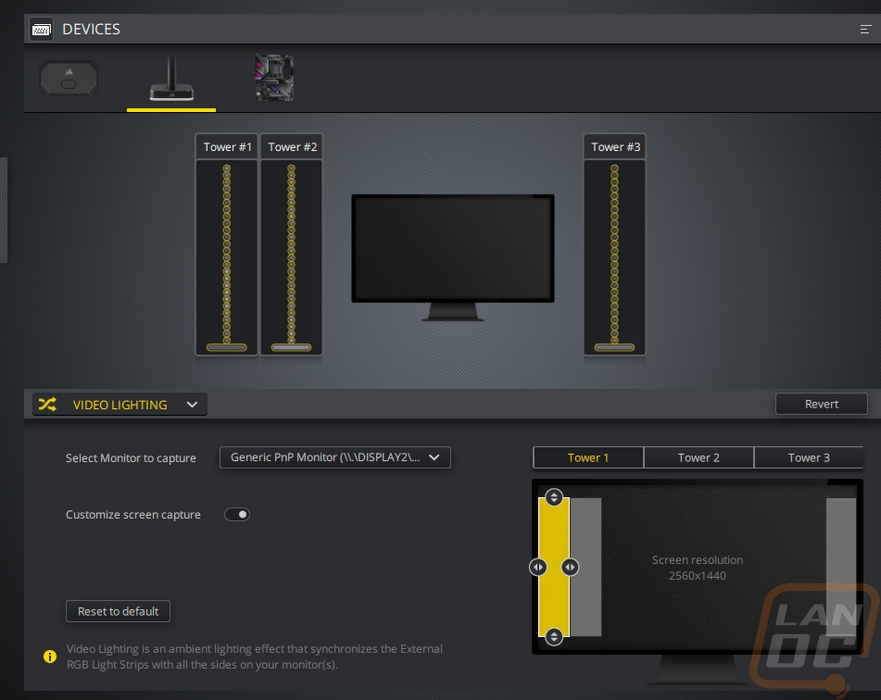 So for performance testing, both the LS100 and LT100 kits are all lighting so there isn’t a LOT of specific testing that can be done. It is all subjective. I was curious though how bright the lighting would be and with the LT100 towers, where would they fit in. What I mean by that, is they show them being used sitting next to your monitor facing out to you which looks interesting in pictures. But having lighting facing directly out at my face is always weird. There is a reason why lighting is normally hidden and used more ambiently. Not to mention I had planned on trying to use the LT100 towers in a unique way behind my multi-monitor setup. Rather than putting an LS100 on each of the four monitors I wanted to play with using the towers to bounce lighting off the wall. First, though I did test them in our photo area and they are bright, but most importantly the diffusion is great making for really cool looking transition effects between colors. The lighting on the bases is a little less useful to me, but if you are using the LT100 next to your monitors it can work. 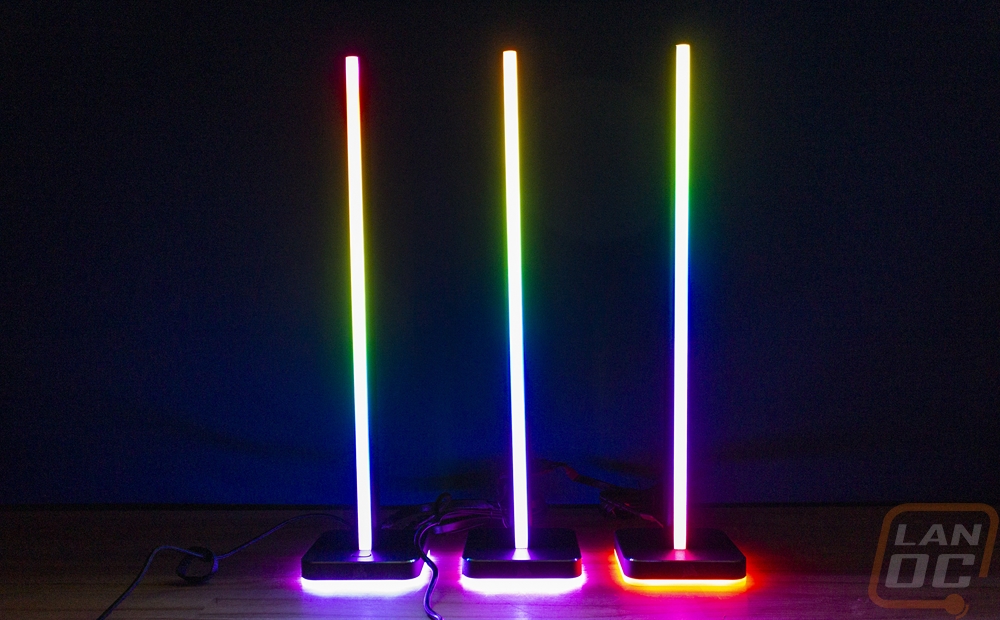 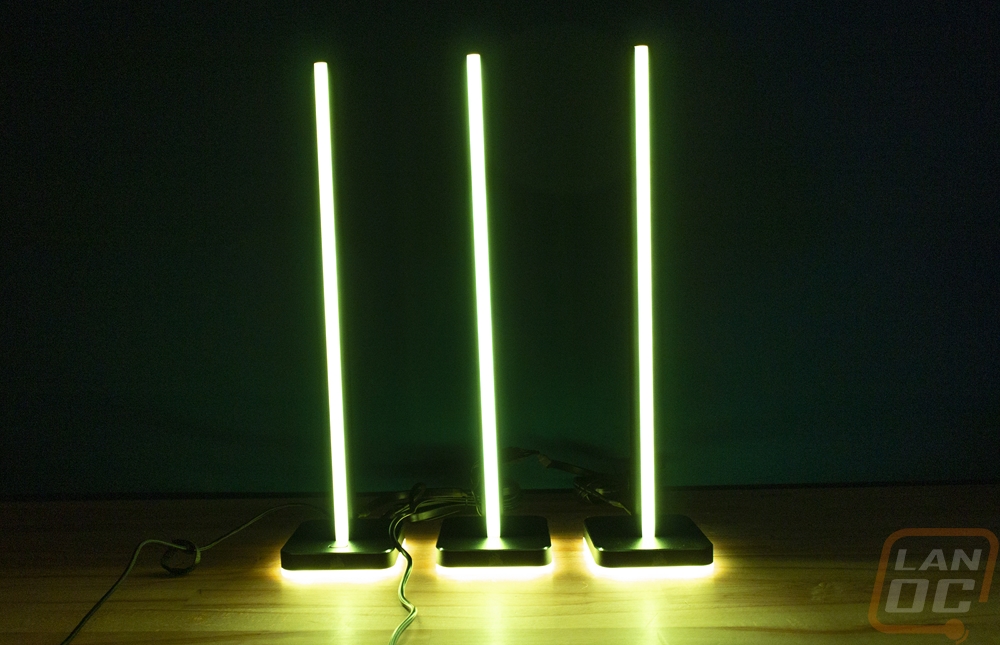 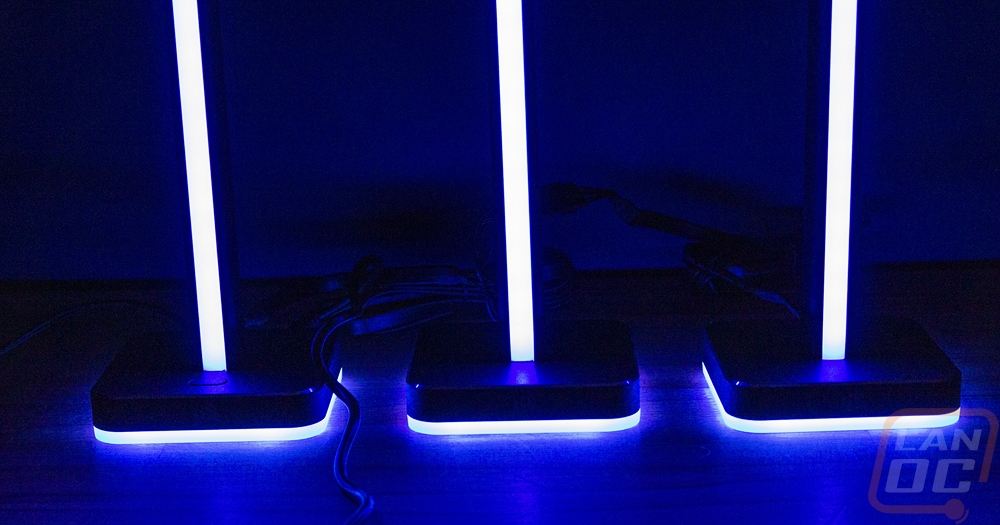 Before installing the LS100 lighting I also took a few pictures in the photo room as well and I think these better show the really good transitions between LEDs that the thick white diffuser layer over top of the LEDs. You can still see some hot spots from the LEDs in the pictures, but in person, you don’t see them at all.

Well, the real question that comes in is the LT100 and LS100 kits ended up lighting up my office the way I wanted? Well yes and no. I’ve been putting off painting my office for a long time now, even with the paint and roller sitting in the room. The biggest issue I ran into using these as ambient lighting was trying to bounce lighting off of the weird orange that my office was painted by the previous owners. A more neutral color, especially a light grey (like is planned) or a white would let the ambient lighting work better. But with the LT100 towers being designed for sitting next to your monitor they did a great job of lighting up behind my 3+1 monitor layout. Only two of the three towers were really needed and I currently have them sitting on top of my speakers which makes them a little too tall. But in the future when I move things around, mounting my speakers up higher will drop the LT100’s down lower. Using LS100’s for this use would still be a better idea, but I wanted to avoid needing 16 strips for the four monitors, not to mention using the LS100’s on my shelving as well. 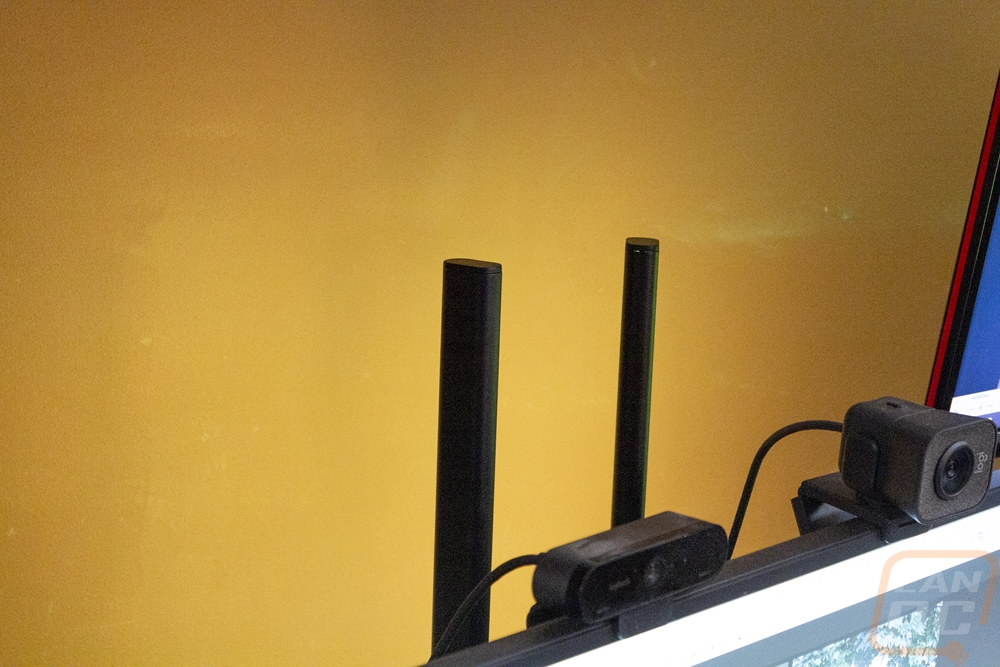 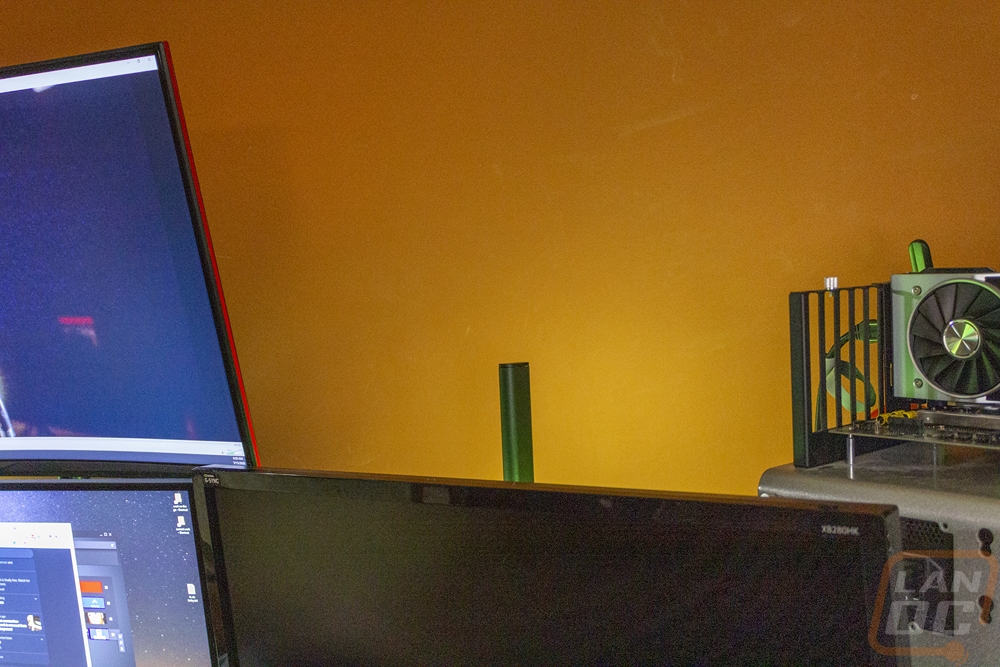 Speaking of the shelving, the LS100 lighting worked extremely well for this. I use these shelves to store video cards in between testing and the addressable lighting makes me want to toy around and make sure all of the AMD cards have red lighting behind them and the Nvidia cards green. But even just simpler solid color effects look great. Of course, getting rid of the wall color will still help even more. I ended up only using one of the LS100 kits for this, so I may still use the expansion kit on the back of my top monitor which I use to watch youtube, tv, and movies. The video lighting effects just work too well. I don’t need more lighting behind the monitors, but getting the lighting around the monitor to match what I’m watching may still be worth the additional lighting. 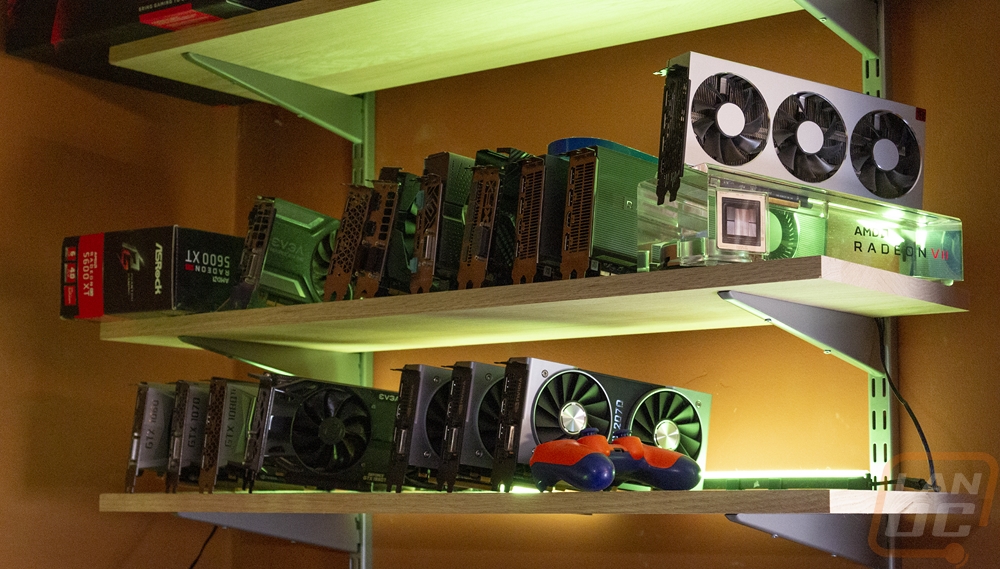 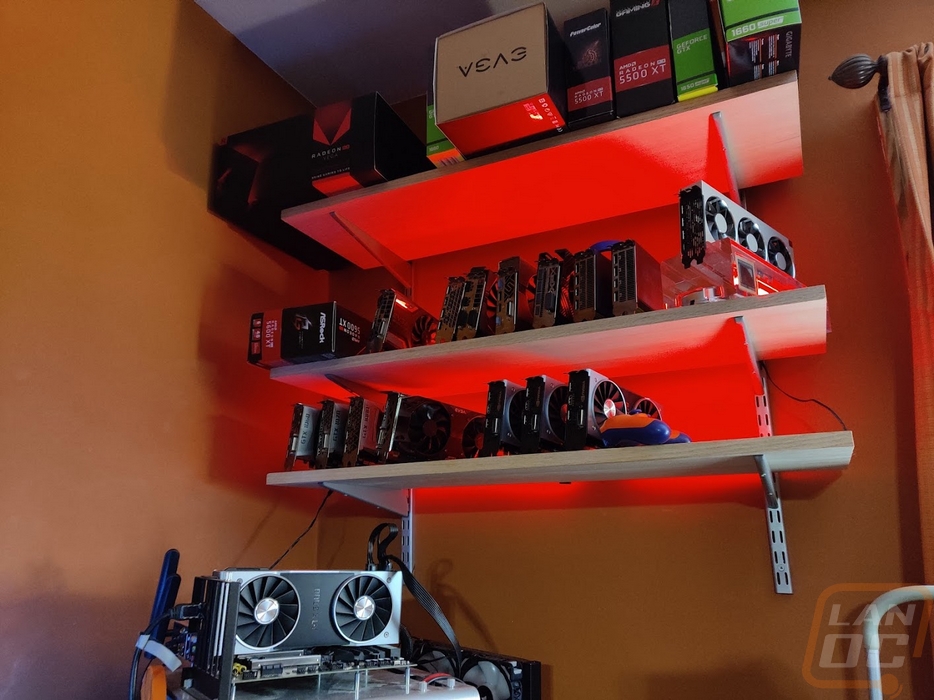 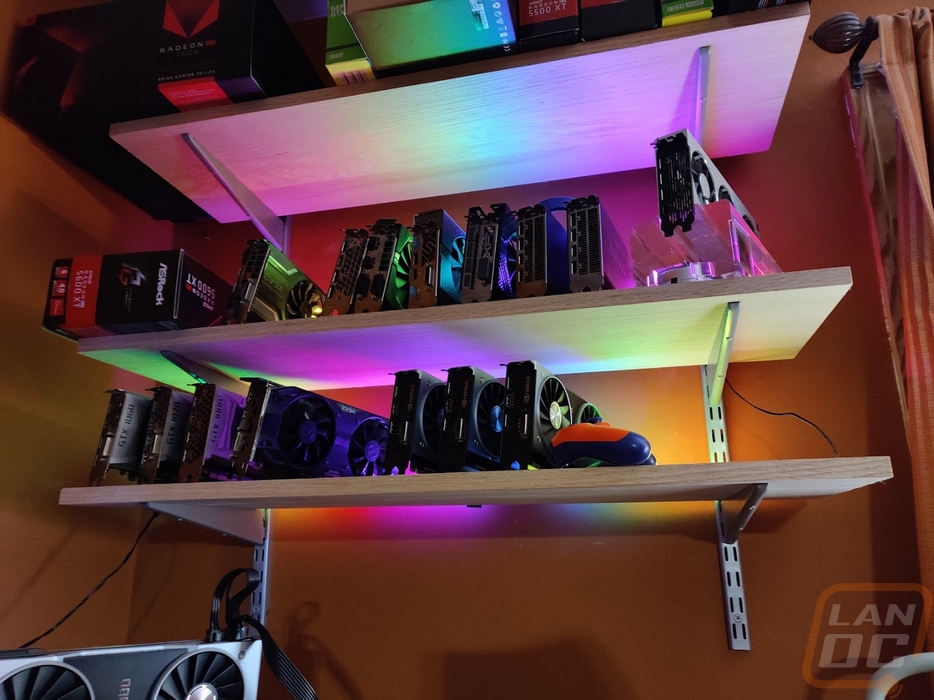