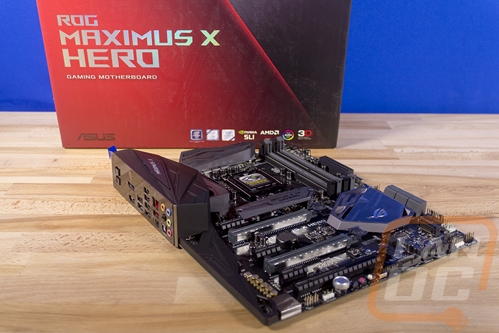 So you are in the market for a Z370 board for your new Intel build. Well there are a LOT of options to pick from, hell I’ve already taken a look at a few and I have more to check out still. But the Asus ROG Maximus X Hero has been on my short list of boards to check out. It was a launch board with Z370 so we are a little late to the party, but that gives me a chance to look at it on its own and then again comparing it to what is on the market to see if it’s a good option to go with.

After diving through the features and performance, there were a few things that stood out to me with the Hero. For one, I love the way this board looks. Asus didn’t stray too far from what has been working for them and I’m glad because it looks good and being color neutral means it should fit any theme. To go with that the Hero has its own lighting in a few spots, not too much and not too little. That ties in with Asus Aura that has good integration with 3rd party products as well. The cooling on the Hero was solid, both in performance an in the best description of the heatsinks as well. They are thick. The UEFI on the Hero is packed with options and Asus always seems to have easy to use BIOS’. Then there is the onboard audio. Personally, I prefer to run an external DAC but for it being onboard it is a great setup. Asus does a lot in the audio market so no big shocker there as well.

As for downsides? Not as many as you might expect. I wouldn’t mind seeing more USB ports on the rear I/O, but that goes for just about every board on the market. Not to mention you do get a USB 3.1 Gen 2 header inside and two on the rear. I also am not a big fan of having the Debug LED up in the top right corner, its harder to see unless you have the PC up above you. Swapping that with the power button would kill two birds, putting that in an easier to reach spot as well.

So overall the Maximus Hero is a great board but where does it fit in the market? Well, the non-wireless version I have here today is a little harder to come by for some reason. The one that should be more expensive, the one that includes Wireless AC is cheaper both on Amazon and Newegg so keep that in mind when shopping. It might be cheaper to get that version if the supply for this one is still limited. That said the MSRP of this board is $239.99 and at that price, it does put it up in the higher end of the Z370 boards available. The Formula is still more, but the Hero is fighting with the best options from every company. That includes the Gigabyte Aorus Gaming 7 that has a similar onboard audio configuration, USB options, and lighting. But the Hero does still stand out on the software side. The gaming 7 does have the built-in Optane and an extra M.2 drive over the Hero though. If I had to pick between the two I would still lean towards the Hero, simply because the user experience is better. But before running out and getting the Hero make sure you can find it at a decent price, $239.99 isn’t a great value but it is okay, anything more than that though would have me looking at other options. 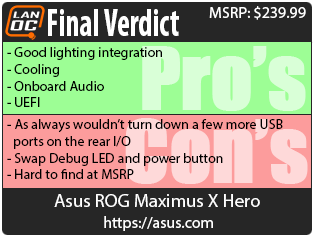 You might call him obsessed or just a hardcore geek. Wes's obsession with gaming hardware and gadgets isn't anything new, he could be found taking things apart even as a child. When not poking around in PC's he can be found playing League of Legends, Awesomenauts, or Civilization 5 or watching a wide variety of TV shows and Movies. A car guy at heart, the same things that draw him into tweaking cars apply when building good looking fast computers. If you are interested in writing for Wes here at LanOC you can reach out to him directly using our contact form.
Discuss this article
Log in to comment
Posts in discussion: Asus ROG Maximus X Hero

We have 791 guests and one member online