Software and a good BIOS is an investment that not every company is willing or able to make. Because of Asus’s size we have generally really enjoyed their software and BIOS’s, especially when it comes to a ROG motherboard like this one. There is just so much to show you guys that we just put everything together in two videos and show you what you would see by flipping through the UEFI and the software.

We start off in the UEFI right in Asus’s advanced mode. The first page you have is the Extreme Tweaker page where you will spend most of your time when overclocking and configuring both your CPU and memory. You will also know that the UEFI is themed out with the ROG colors and logo up top. Also if you haven’t gotten a new motherboard in a while, you may also be shocked to see a mouse cursor here. Being a UEFI Asus was able to include mouse support, my video mostly uses the keyboard but you have the option to use mouse or keyboard. Back on the Extreme Tweaker tab as we flip down we have clock speed and voltage options out the wazoo. I don’t have time to go through every option but to say the least Asus has made sure that you won’t be limited on your overclock by the lack of ability to tweak anything at all. To help with it all, when you select an option they also give you a small tidbit of information on it on the right side of the screen whenever possible.

On over onto the advanced tab you have everything broken down into 9 different sections, splitting up options for things like CPU configuration, SATA Configuration, even LED controls. Each has a wide selection of options to let you tune things to your liking. This is where you will find things like the ability to turn on your RAID or to configure how you want your USB ports to act or you can even go down to the port and turn off specific USB ports. I would highly recommend flipping through it all to get your build perfectly configured for yourself.

Next you have the Monitor page where we can check and watch all of our fan speeds and temperatures. Along with that we can go in and set up the minimum fan speeds for each fan and put them on different profiles for quiet or “turbo” use.

Once you are finished setting everything up, under the exit option there is one last option that you should take a look at. The ASUS EZ Mode will take you to a more graphical interface that shows you the time and your basic configuration including temperatures and voltage settings. This is made for people who aren’t comfortable with jumping into a BIOS but still need to change the boot priority for example, here all you have to do is drag them into the order you would like.

When compared to most other manufactures there aren’t many who can hold a candle next to the Asus Suite II that is included with every Asus motherboard. Just having everything you need all in one program is important and this makes running the software less of a hassle and more of a useful tool that you would actually put to use. With this being a ROG board the software starts up with that red and grey theming as well as the ROG logo up in the corner. The first option we are given is the CPU level up or TurboV EVO. You will notice that it says it is powered by the TPU up top, this is a small chip on the motherboard that helps with overclocking and underclocking for better power usage. I will talk more about the overclocking in our overclocking section though.

One of the most impressive things in the software is the DIGI+ II Power Control. This is a combination of the features of the Formula V as well as Asus’s software. Asus has been a leader in moving power control from analog to digital over the past few years on their entire product lineup. In the past they were able to fit all of their DIGI+II Power Control options onto one page but as you can see this time around we have three different pages all together, each with a wide selection of options/slider bars that you can adjust. The reason for the multiple pages is because they now support full DIGI+ on the CPU, iGPU, and DRAM. There is also a page called smart DIGI+ that lets you set it and forget it when it comes to all of the DIGI+ Power Control. There are options for overclocking and just as importantly there are wattage limitation settings that let you cap your power usage to keep your environmental footprint low.  I love that on the right side of the page they have information that adjusts along with the settings that you set your power control to show you what you are doing.

Next we have the EPU page. The EPU is a power saving engine that is also built into the motherboard just like the TPU. Here we have more power saving options like various options on turning the vCore voltage down as well as when to turn off hard drives and the monitor. As enthusiasts we rarely think about power usage, but I love that Asus has included all of this to allow my PC to save money when I’m not using it. The money saved might help me put a little extra back for my next build or for a new game.

The FAN Xpert 2 option is where you can tweak and tune each fan in a much more in depth way than what we had in the UEFI. Here you can change the fan speed ramp up depending on temperatures individually. There is also an Auto Tuning option that will optimize your configuration based on the fans you have and how many you have. Once tuned you have Silent, Standard, and Turbo options as well as an option that will turn everything to 100%.

Next is the Probe II tool as well as the Sensor Recorder. Here you can check every single voltage, fan speed, and temperature on the Formula V. Using the Sensor Recorder you can also record any of those sensors over time and see how your pc reacts when gaming or benchmarking. This will come in handy in the future with troubleshooting as well. It puts together a nice easy to read graph where you will be able to see something overheating or where you might need to ramp up a fan or two.

The rest of the Asus Suite are things like the Ai Charger option that lets you push more charging power to your mobile devices . You also have the USB Charger+ option where using the white ROG connect port you can charge your device while your PC is off or in standby mode. Last is the USB 3.0 Boost page where we can turn on USB 3.0 boost and increase the USB 3.0 transfer speeds considerably. Check out our SATA 3 and USB 3 section to see what to expect from this option. 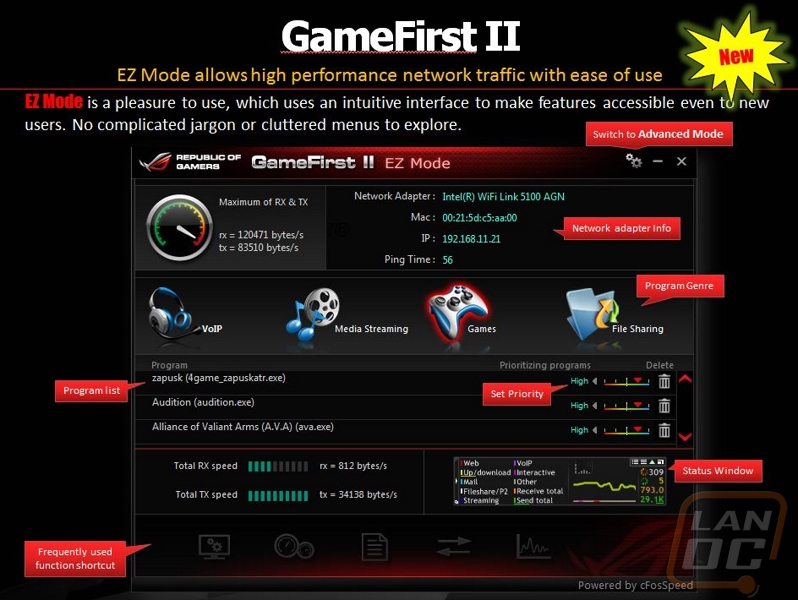 Another part of the software that wasn’t covered in our video is the GameFirst II program. Those of you who have used a Bigfoot Network card will see a few similarities. Basically Asus has included software that controls traffic shaping on the Formula V to help you get the best performance in game. It does this by splitting your traffic up into VoIP, Media Streaming, Games, and File Sharing. With that it can give each a priority allowing latency sensitive traffic through first and doing things like file sharing in the background. Asus gives examples of where they saw WoW latency drop from 100 to 12ms. This isn’t going to give you a major jump in performance in your everyday stuff, but what it will let you do is downloading while gaming or streaming. This is where you will see an improvement.

Another value added feature that Asus includes with the software on the Formula V that rarely gets talked about is the free Kaspersky Anti-Virus. This just another add in that Asus includes that adds to the value and to their costs that you don’t really think about. Kaspersky is one of the most popular Anti-Viruses and should help protect your new build. Also included is a ROG themed CPU-Z, it might be free but it is cool that you get more ROG themed products along with your purchase.

Interestingly enough, the fact that this board comes with Wifi GO! Isn’t really pushed all that much on the Asus website. For those of you who don’t know what WiFi GO! Is, the included WiFi/Bluetooth card along with Asus’s software lets you do a few things. For one, you can actually turn your PC into a wireless router if needed to stream DLNA content to a wireless enabled television or a stereo. Along with than you have WiFi GO! Apps on android and iOS. These programs allow you to remote desktop, control your PC via motion or remote keyboard and mouse, and even remotely overclock your pc. It’s not a feature that I personally need all that much, but I love that Asus has included it all. The more features the better!