When it comes to good looking motherboards there is a fairly short list and as a whole I don’t think there is an Asus ROG board that wouldn’t be on that list. The Formula V is actually one of the best looking boards I have seen from Asus with the Rampage 4 and the Rampage 3 Black Edition also being up there. I love the way the new hybrid cooling looks in addition to the black and red theme throughout the entire board. We won’t cover the cooling until the next section, but in this section I will break down the board’s layout and touch on its hardware features. Here are a couple overall shots of the board, but the devil is in the details so make sure you scroll on down and check out what is going on in the more detailed photos. 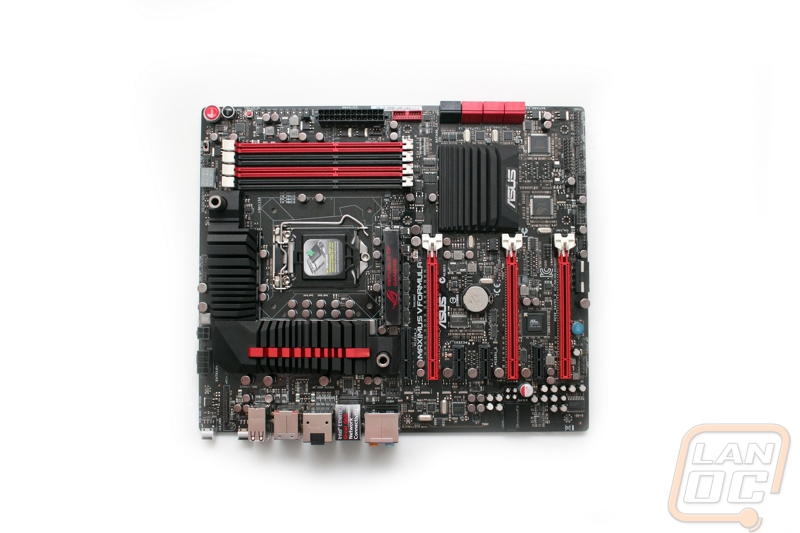 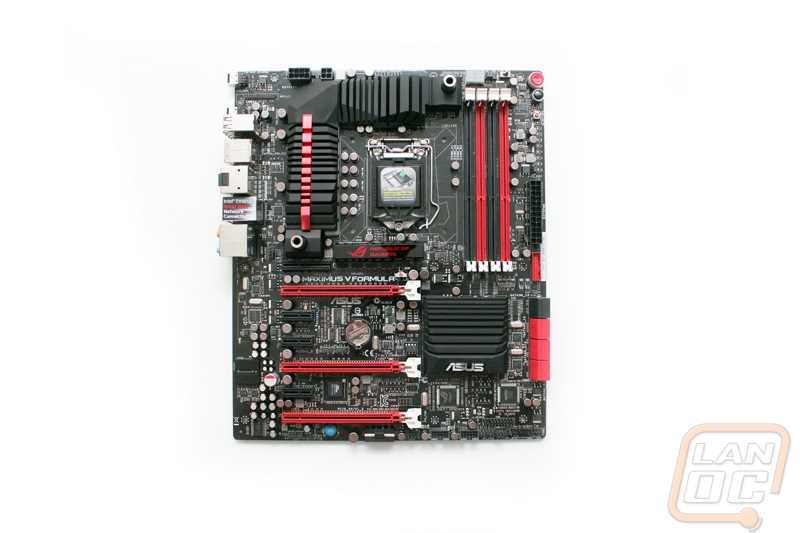 To start things off let’s take a look at the Formula V’s PCI slot options. We have three PCI Express 2.0 x1 slots, one PCI Express 2.0 x4 slot and three PCI Express 3.0 x1 slots. Being limited on PCI Lanes on the CPU there is no way that all three of those x16 slots are going to get full bandwidth when they are all filled. The way it breaks down is if you have two being used they both drop down to x8’s and if you use all three you have x8/x4/x4. This isn’t perfect, but in this case this is completely out of Asus’s hands. This is exactly why I still suggest X79 builds for anyone who is planning on running multiple video cards.

I love how Asus spaced out their PCIe slots on the Formula V. You have the x4 slot up top where you can put a PCIe SSD without it getting in the way of your video cards. Then the first x16 slot has two x1 slots below it to make sure that even with Asus’s three slot video cards you will be able to fit at least two cards. The other benefit to this is if you are running three video cards the top card that normally gets the hottest has room to stay a little cooler. 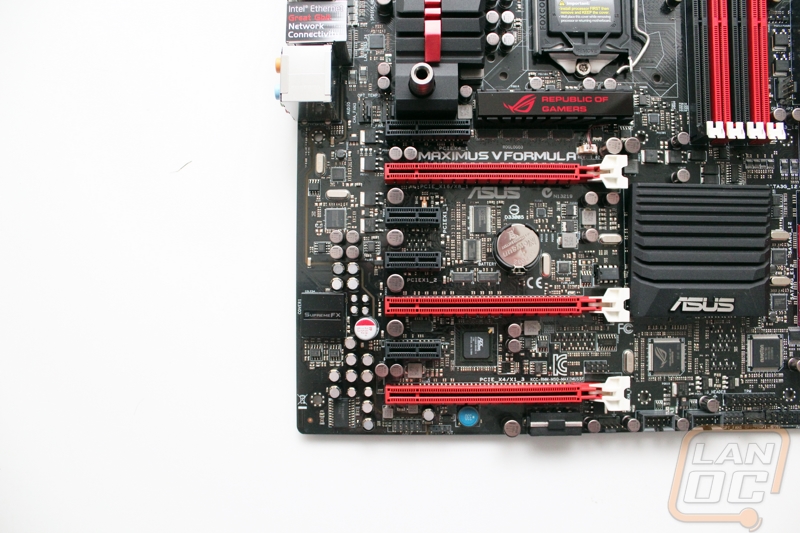 Starting up in the top left corner we can see the CPU power connections include a four pin and eight pin plug. Generally you only need the eight pin, but for more power when overclocking the additional power will come in handy. Here we can also see the mPCIe header that the mSATA/Wi-Fi combo attaches too. 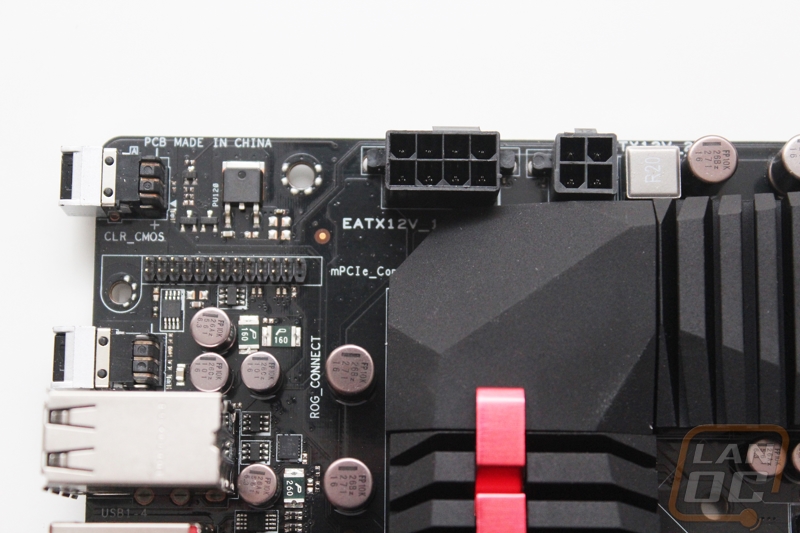 Here is an overall shot of the top right corner of the board. The Formula V, like other Z77 boards has four DDR3 DIMM slots. Asus color coded them black and red to keep with the ROG theme. For hold downs there are only clips on the top, this does take some getting used to but does mean less to deal with when installing your RAM. 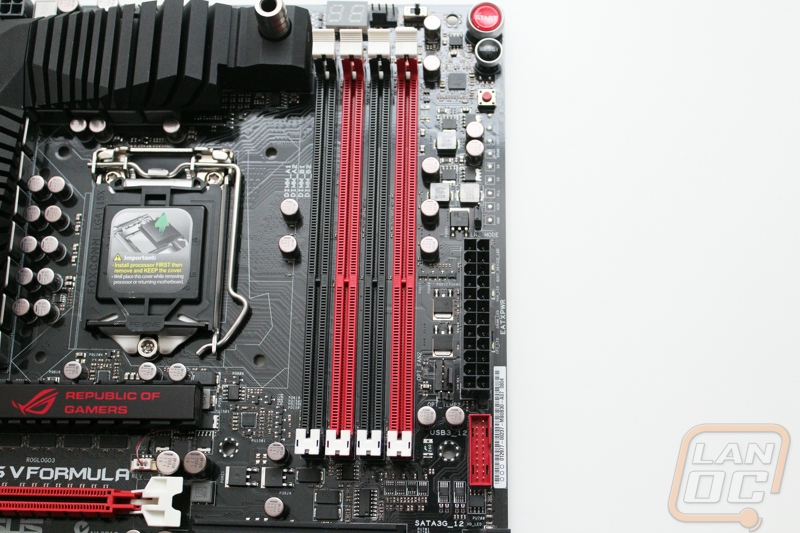 Up in the top right most corner we have a debug LED just above the DIMM slots; this is an interesting location as we normally see this down in the bottom right corner. Here it is less likely to be covered by a long video card though. Next to it there is a four pin PWM chassis fan header. Right next to the fan header we have an on and off switch labeled slow mode. Similar to the GO button in a way, slow mode will slow things down during boot to prevent booting issues while overclocking. Then of course we can’t ignore the two backlit buttons for start and reset. I really like that they are up in the top right corner over the bottom right corner, with multiple video cards installed they are much easier to get to. 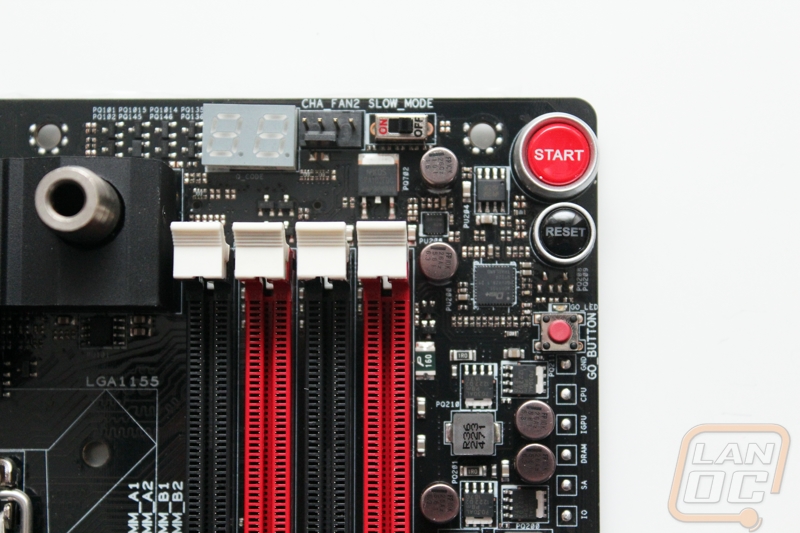 In the area to the right of the RAM DIMM slots under the buttons we have a few things going on. First the small red button is the GO button. The first thing that comes to mind with this is the movie Men In Black where when they press the little red button the speed through traffic. In a way this is similar. In the UEFI you can configure a GO profile and when you press the button it will overclock your PC to those settings. This is great if you are trying to overclock and are having a hang up at boot for example. Just below the GO button you have nine small solder points called probelt voltage readout points that are all labeled and allow you to check all of the board’s voltages on the fly using a multi-meter. Tucked in just beside the probelt voltage readout points and above the 24 pin power connection is a small LN2 Mode jumper as well. This changes a few settings to allow you to boot when running at extreme settings that are generally associated with sub-zero cooling (LN2). 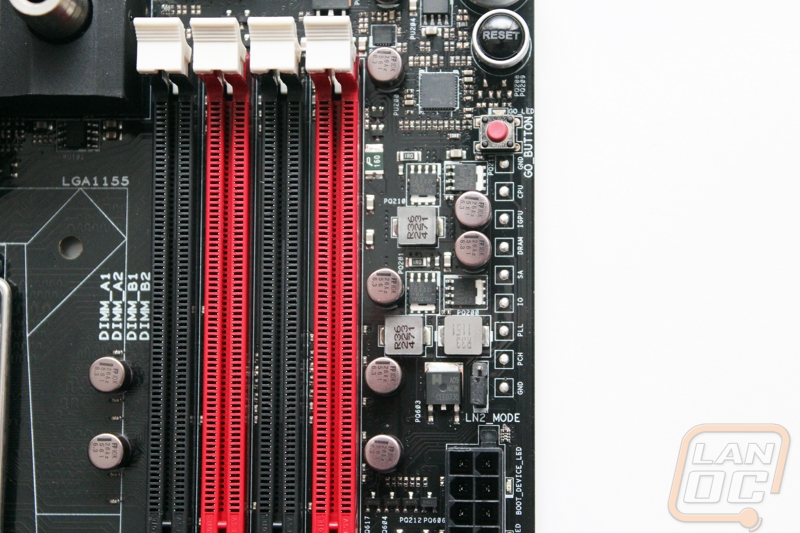 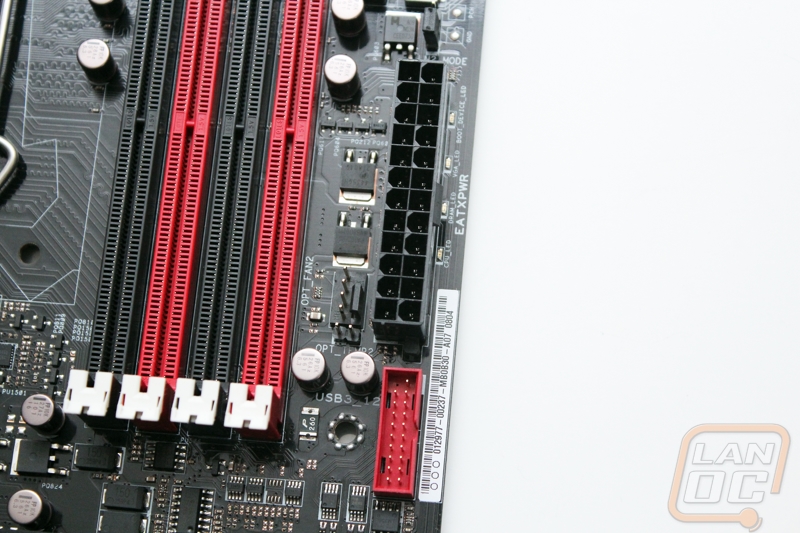 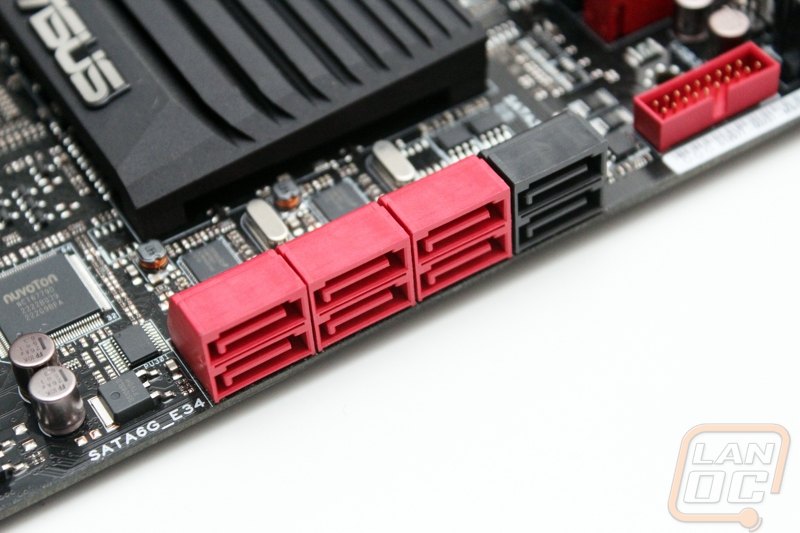 In the bottom right corner of the board we have what can only be described as a whole mess of headers packed into a small space. You have two USB 2.0 headers over on the left. Next we have the TB Header, or in other words the ThunderBolt header. This is for use if you want to add thunderbolt in the future. As you can see they didn’t even have room to fit the name of the header in that area. Next we have a four pin PWM fan header and directly next to it is a small two pin temperature sensor plug. Just above those headers is the TPM header. TPM stands for Trusted Platform Module and this can be used for things like disk encryption. Last but not least we have the front I/O header as well. Considering how many headers that are packed into this corner it is especially important that Asus included the Q-connectors that will make plugging everything into the front I/O panel simple. 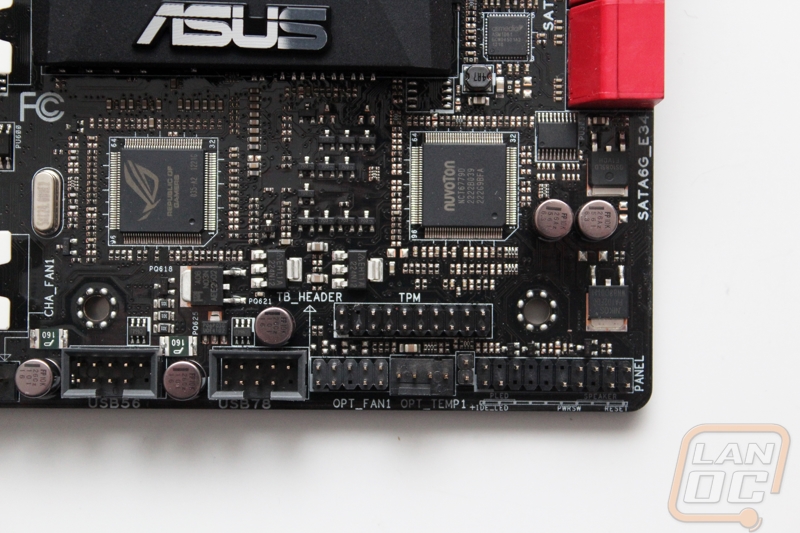 Down under the PCI slot you can see another four pin PWM fan header and also a right angled Molex plug to feed more power to the PCIe if needed. If you have ever needed to plug one of these supplemental power connections in you will completely understand how great it is that this is Molex and it is at a right angle on the bottom edge of the board. Many times I have needed a 6 pin connection above the PCI slots. Not only is it hard to find an extra 6 pin plug when you are running enough video cards to need the extra power on the PCIe ports, but putting the plug in above the video cards makes cable management impossible. 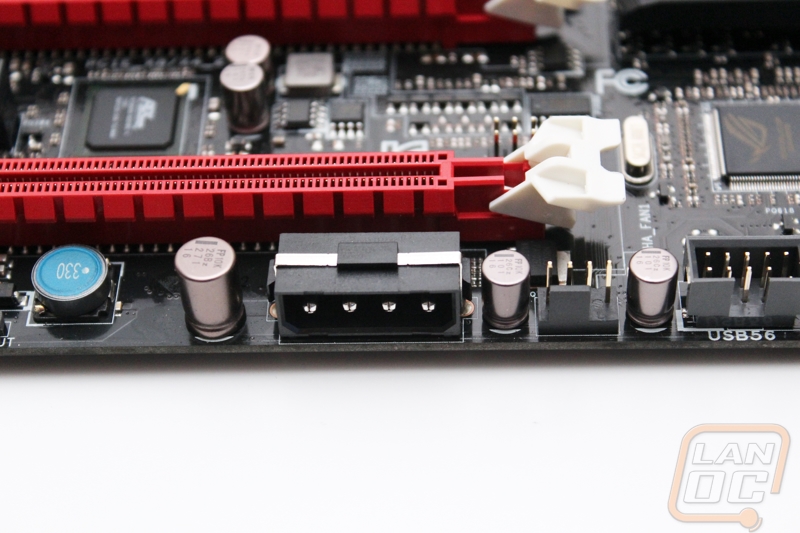 Here are two four pin PWM fan headers tucked in behind the rear I/O panel. One is labeled chassis and the other is labeled optional. 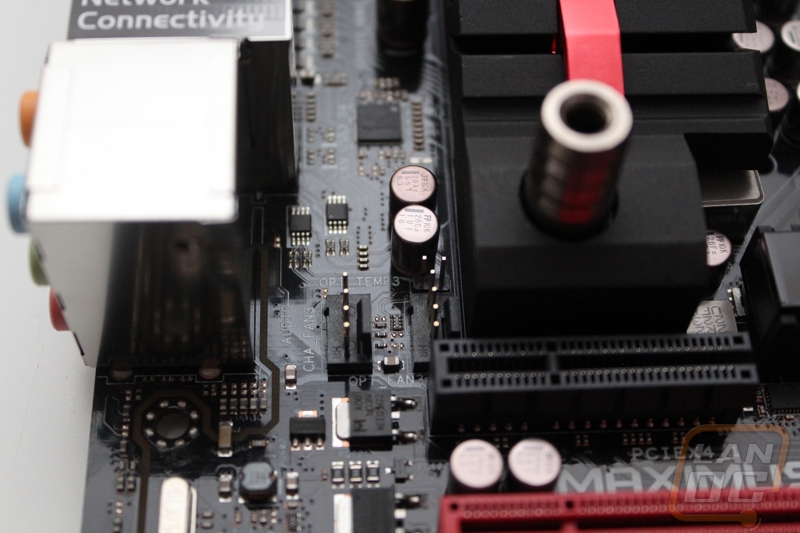 Here are our last two PWM four pin fan headers. These are specifically for the CPU; I wish more manufactures would make a point to give two CPU specific fan headers. A lot of people use push-pull configurations and this is the best way to handle them while keeping the fans in sync. It’s worth noting that both of these ports and the motherboards six other fan headers are all four pin PWM headers, generally we are lucky to have one PWM fan header for the CPU, let alone 8! 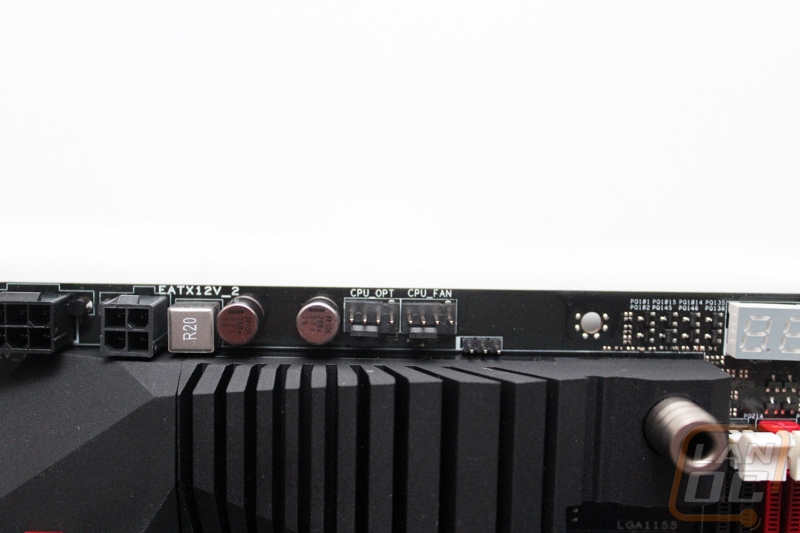 Back on the rear I/O Panel starting from the left we start with the backlit CMOS reset and ROG connect buttons. In between is the header for the mPCIe combo that lets us have Wi-Fi antenna connections on the rear I/O. Next we have four USB 2.0 ports and the bottom port is white in color for use with the ROG connect and USB BIOS Flashback. Next we have two USB 3.0 ports and an eSATA connection, the eSATA is running off of the Z77 chipset while the two USB 3.0 ports run on the ASMedia USB 3.0 controller. Next we have an HDMI and a full size DisplayPort plug along with a S/PDIF (optical) output. The next stack has two more blue USB 3.0 ports but these are run on the Intel chipset unlike the other two. Along with it you are getting an Intel Gigabit LAN port. It is important to note that Intel NIC’s are fairly rare on motherboards because of their additional cost; Asus still goes with them despite their cost because they are considerably better than other solutions. The last stack is your typical grouping of audio ports including a S/PDIF (optical) input. 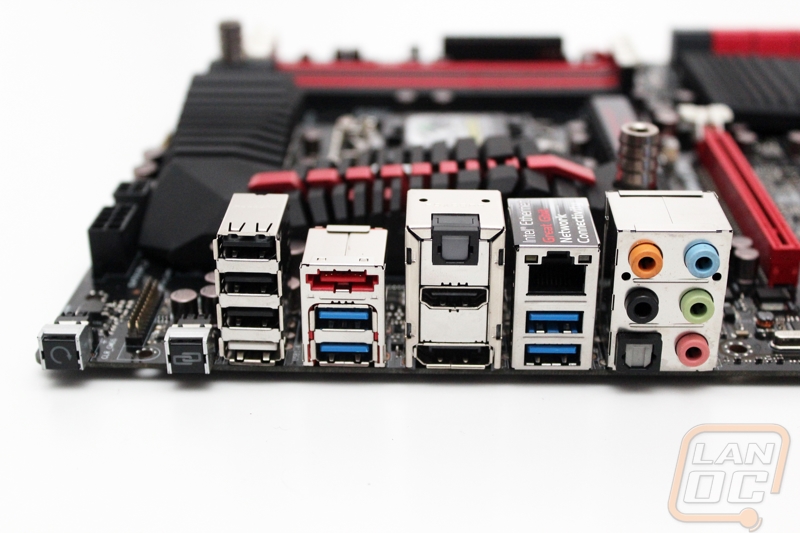 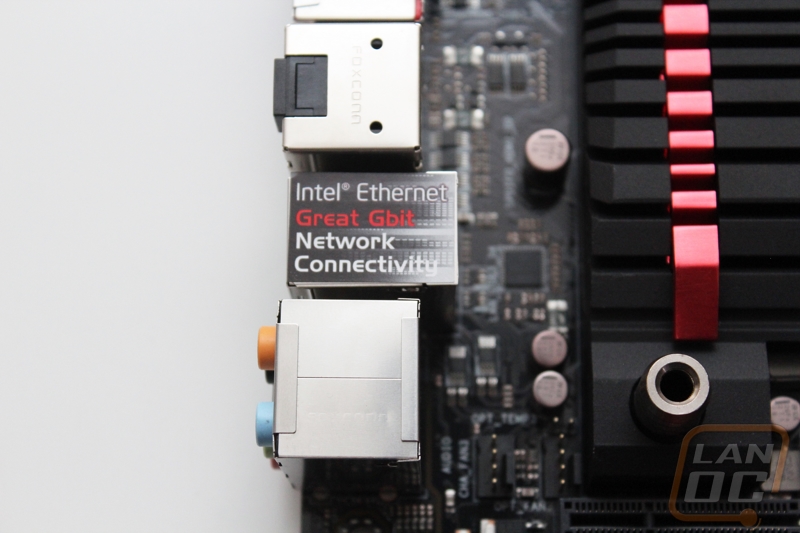 Last but not least, when we flip the Formula V over we can see its all black PCB much better. Of course there is also the bottom half of the CPU socket but what is more interesting is the large black support just above it. This is to support the weight of the combination cooling on the flips side. From this side we can see where the audio circuitry is divided up as well, If you look in the top right corner you can see through that one line. This shows once again that the audio circuitry is completely disconnected from the motherboards circuitry to avoid crosstalk and interference issues that onboard audio generally has. 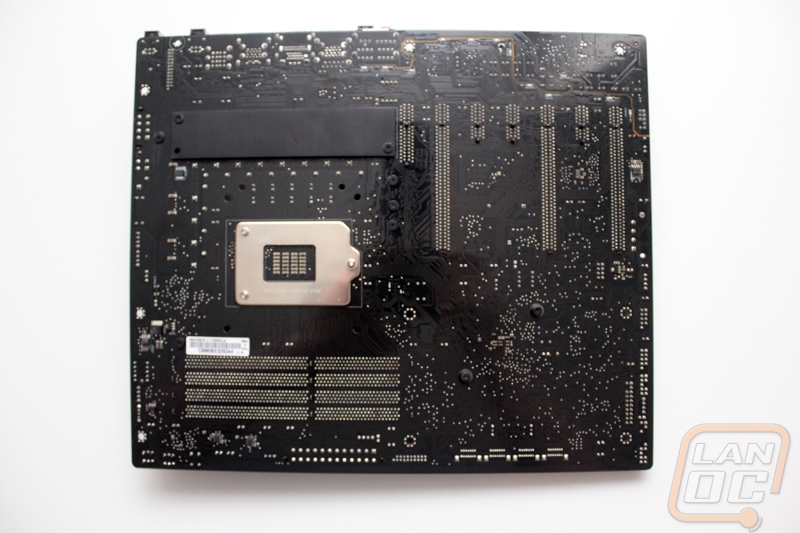 We have 1460 guests and one member online