The P8Z77-I is without a doubt the easiest of Asus' Z77 line-up to pick out. Not only does the box match that which a mini-ITX would be packaged in, the graphic design of the package is also quite different from those we've covered thus far. The flipside is also not as clustered with information, though you'll soon find this board has just as much to offer. 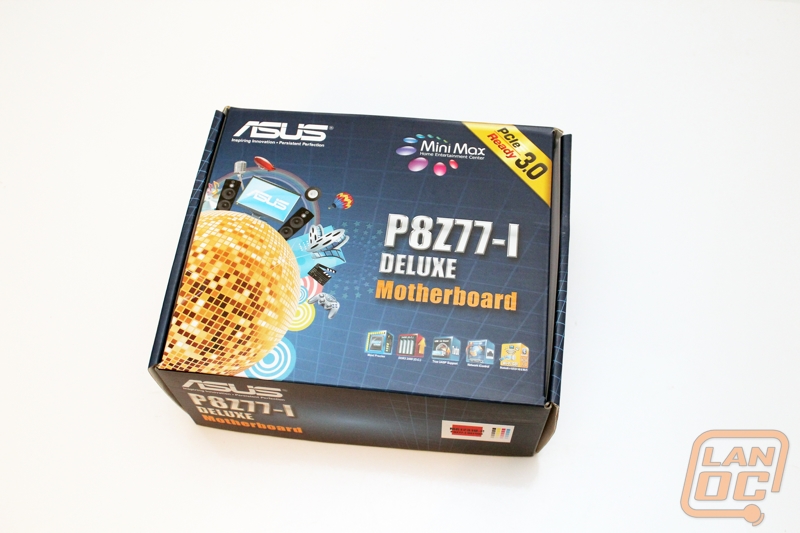 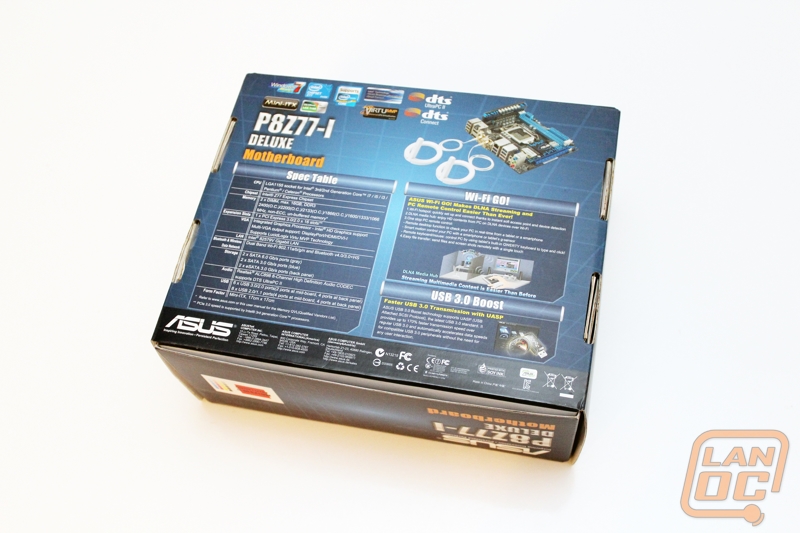 The box may seem a little taller than usual, though once you open the clam-shell box you see why. Asus has designed the box with a unique riser card that we will certainly cover in-depth later in this review. Also included is the rear I/O shield, front panel connector cables, four SATA cables, and two Wi-Fi ring antennas, which in combination with the built-in Wi-Fi card makes the board wireless out of the box. 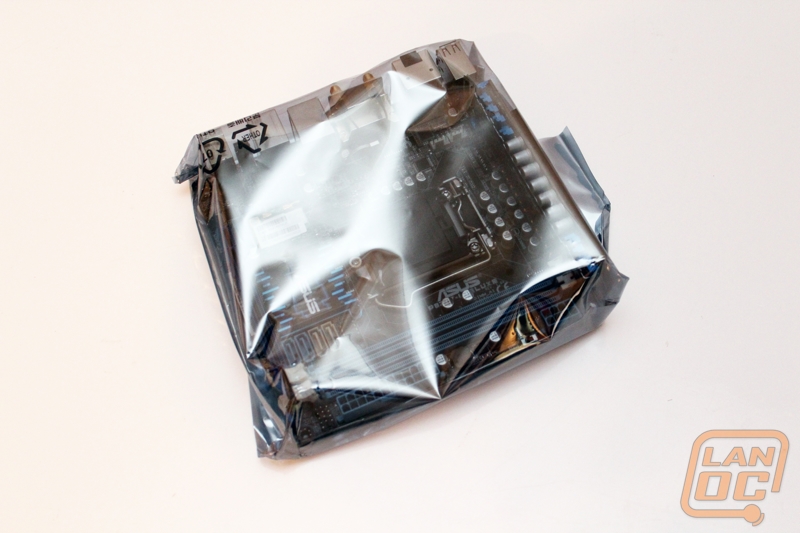 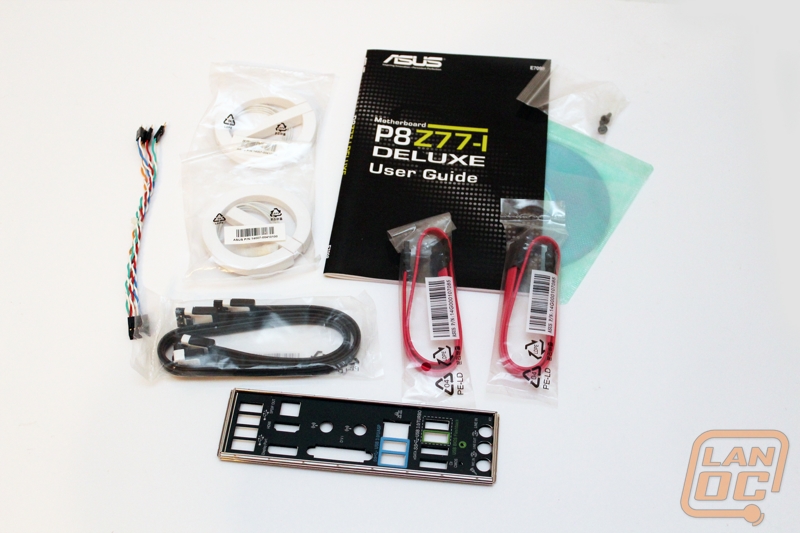 Good things come in small packages and the P8Z77-I Deluxe is a perfect example of this. Being a Mini ITX form factor Asus has packed that small form factor full of features as you can easily see. There isn’t an inch of the board that doesn’t have something going on, all the way to the point where they have actually used a riser card for the board’s power circuitry. Let’s dig in! 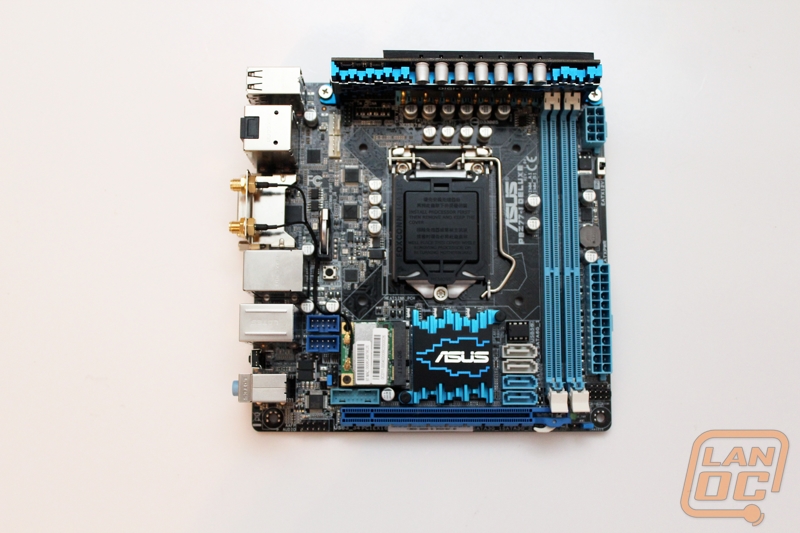 The most unique thing about the P8Z77-I Deluxe is the way that Asus managed to pack its Dual Intelligent Processors 2 with 10 DIGI+ VRM  (8 -phase for CPU, 2 -phase for iGPU) onto a mini ITX board. They went with a riser card coming off the top of the board just above the CPU socket. The riser card is attached by its heatsink. When the board isn’t installed in a case Asus bolted everything together with two bolts. But when the board is installed in a case you have two extra length screws included with the board for screwing it to the motherboard risers. 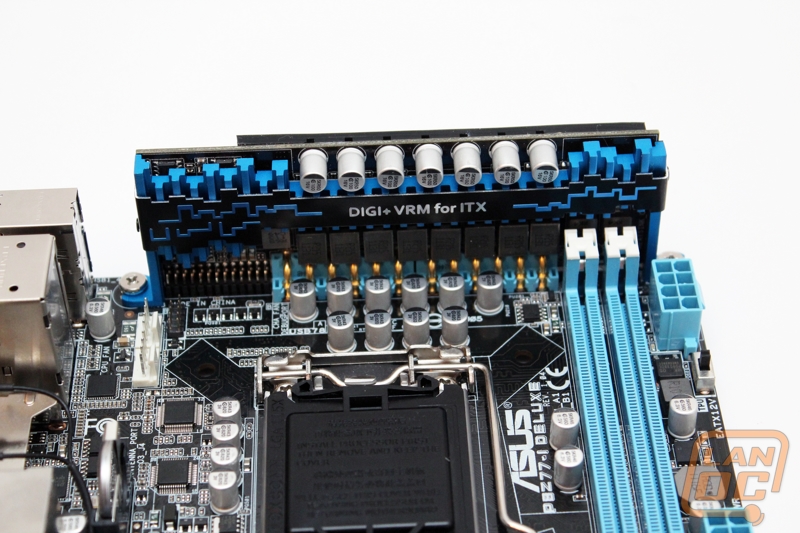 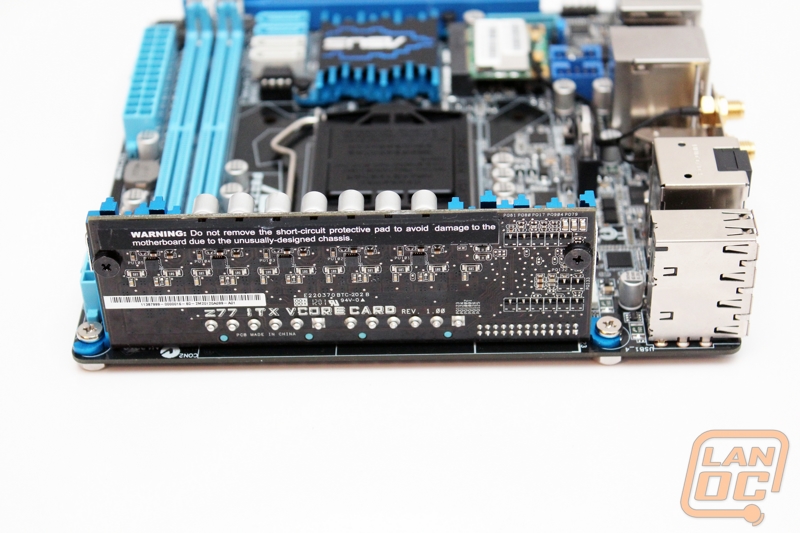 Starting in the top left region we have the CPU socket, the MemOK button, and the board’s battery backup. To save space the battery is positioned horizontally. You also have two four pin PWM fan headers tucked away just below the power riser. 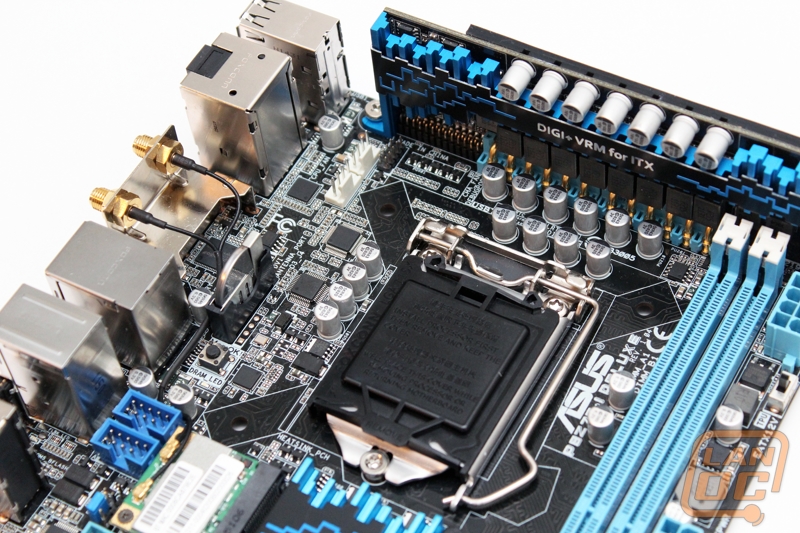 Because of the power layout the P8Z77-I Deluxe’s 8 pin cpu power header is placed over on the right edge rather than the top like we would normally see. Just below it you have the TPU switch for auto tune overclocking. 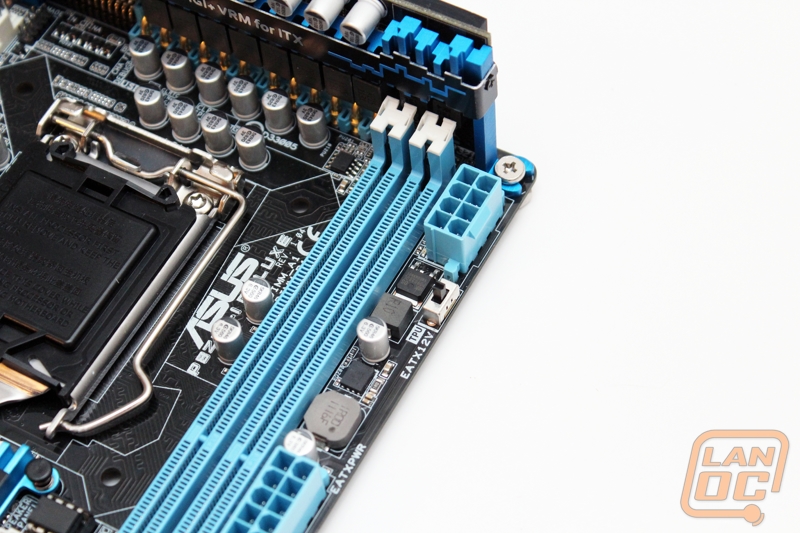 Down in the bottom right corner you first have the boards 24 pin power connection along the edge just the like the 8 pin power connection. Wiring this board up should make for easy wire management if you can find a case that allows for decent wire management in such a small form factor. Under the power header is a small black header that looks like an audio header. It is actually the board’s front panel connection, they packed everything in a little tighter than normal to make room for everything else. This is why they included an adapter cable along with the board. For SATA connections we have four total, two SATA 2 and Two SATA 3, tucked away in next to the chipset heatsink. It’s a tight fit and a little hard to get to with a large heatsink but in order to fit everything on the board they packed everything in. 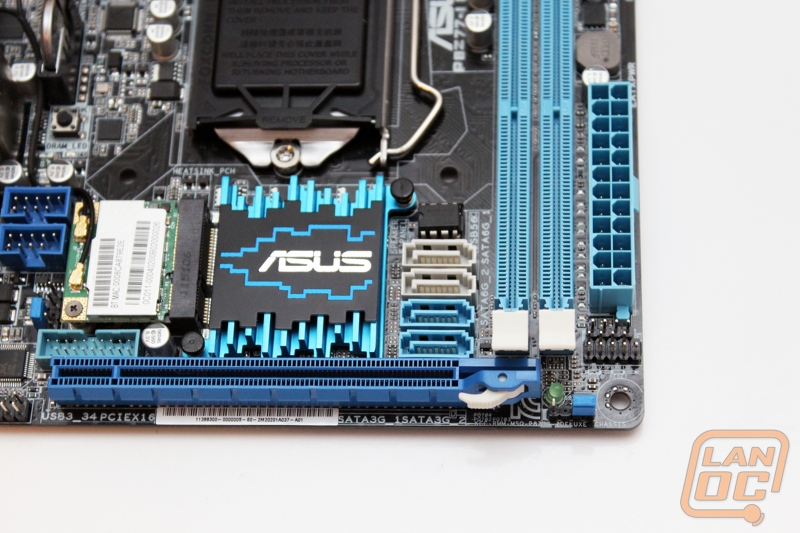 On the bottom left side you can see that Asus has packed the boards two USB 2.0 and one USB 3.0 headers in any spot they could find while still being able to offer built in wireless. Just to the left of the boards PCIe x16 slot we have the front panel audio connection. This is going to be a really tight fit if you put a dedicated video card in this card but considering how much Asus has managed to pack in such a small form factor, we can give them a pass on this one. 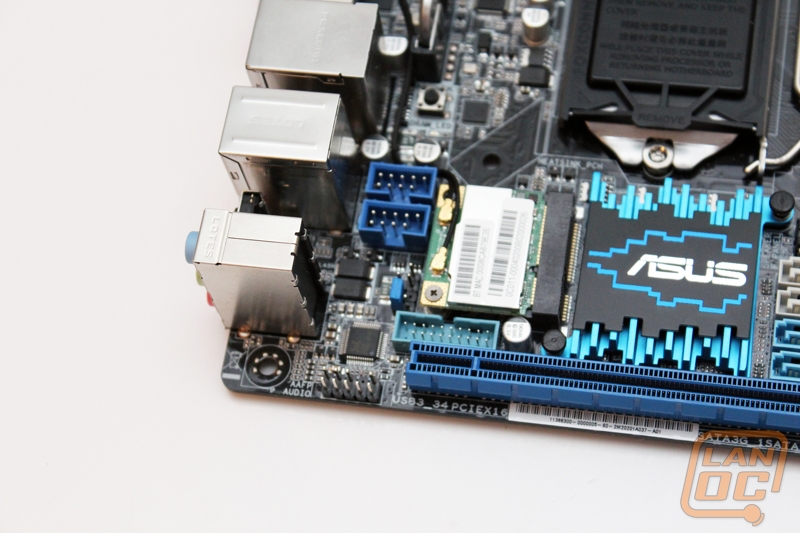 Unlike the other Asus boards this one only has two DDR3 dimm slots, packing any more would literally mean getting rid of the CPU or the rear I/O panel. 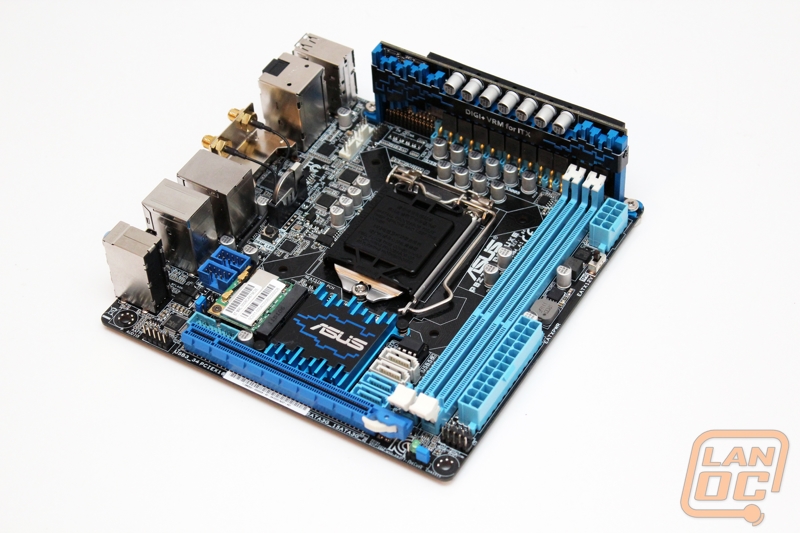 Even on the P8Z77-I Deluxe Asus went with an all-black PCB. From this view you can see the two bolts that hold the power riser card in place when the board isn’t in installed. 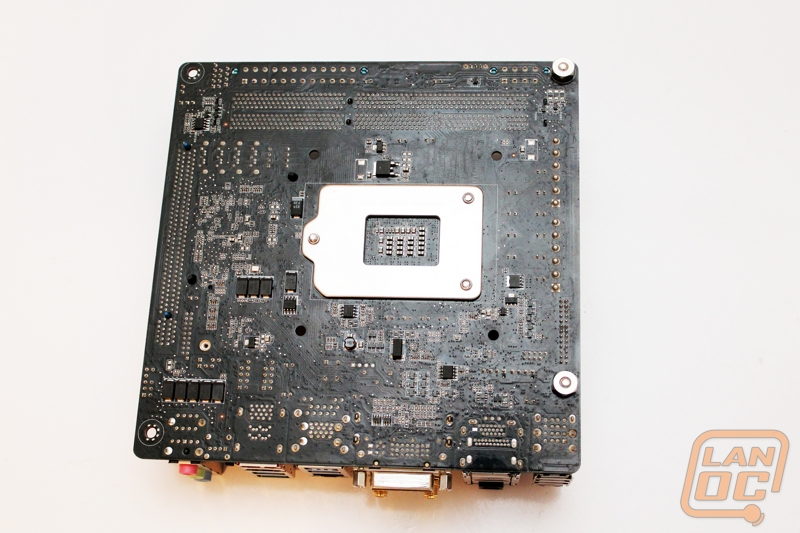 Just like the rest of the P8Z77-I Deluxe, the rear I/O panel is packed full. With a whopping 8 USB ports on the back, it’s amazing they were able to fit anything else on the back. Of the eight USB ports, four of them are USB 2.0 and four USB 3.0 (two on the Z77 chipset and two on the ASMedia® USB 3.0 controller). For video card connections you have Displayport, HDMI, and DVI. For audio things have been cut down to three due to limited space on the Mini ITX motherboard, you also get an optical out. Above the DVI output you have the two antenna connections for the boards built in wireless N. Last but not least there are two small buttons over on the right side of the I/O panel. The top button controls the boards USB BIOS Flashback functionality and the bottom button is the clear CMOS button. 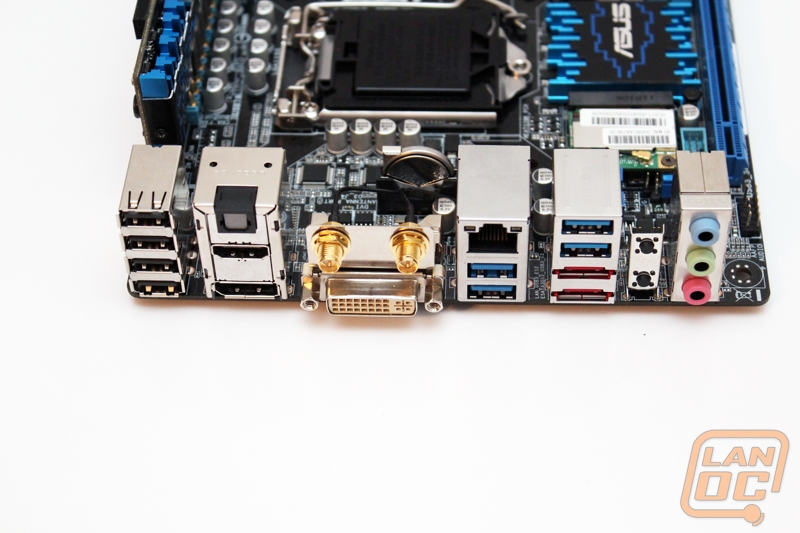 The P8Z77-I Deluxe’s cooling is much simpler than what we have seen with other boards, not because it isn’t important, but because there just plain isn’t room. There are two heatsinks on the P8Z77-I Deluxe, the chipset heatsink at the bottom and the heatsink overtop of the power circuitry. Both heatsinks share the same design that we saw on both of Asus’s other mainstream boards that we are covering today. Each heatsink is carved out of aluminum and anodized blue in color. 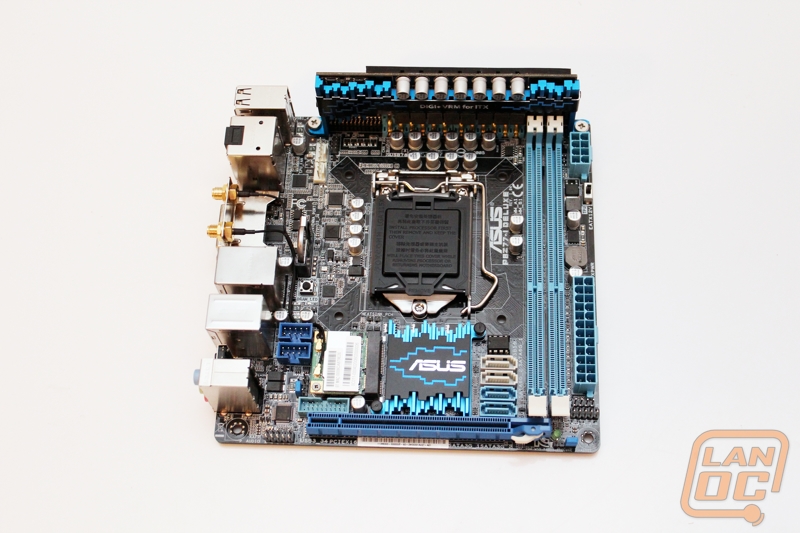 We have 1634 guests and one member online